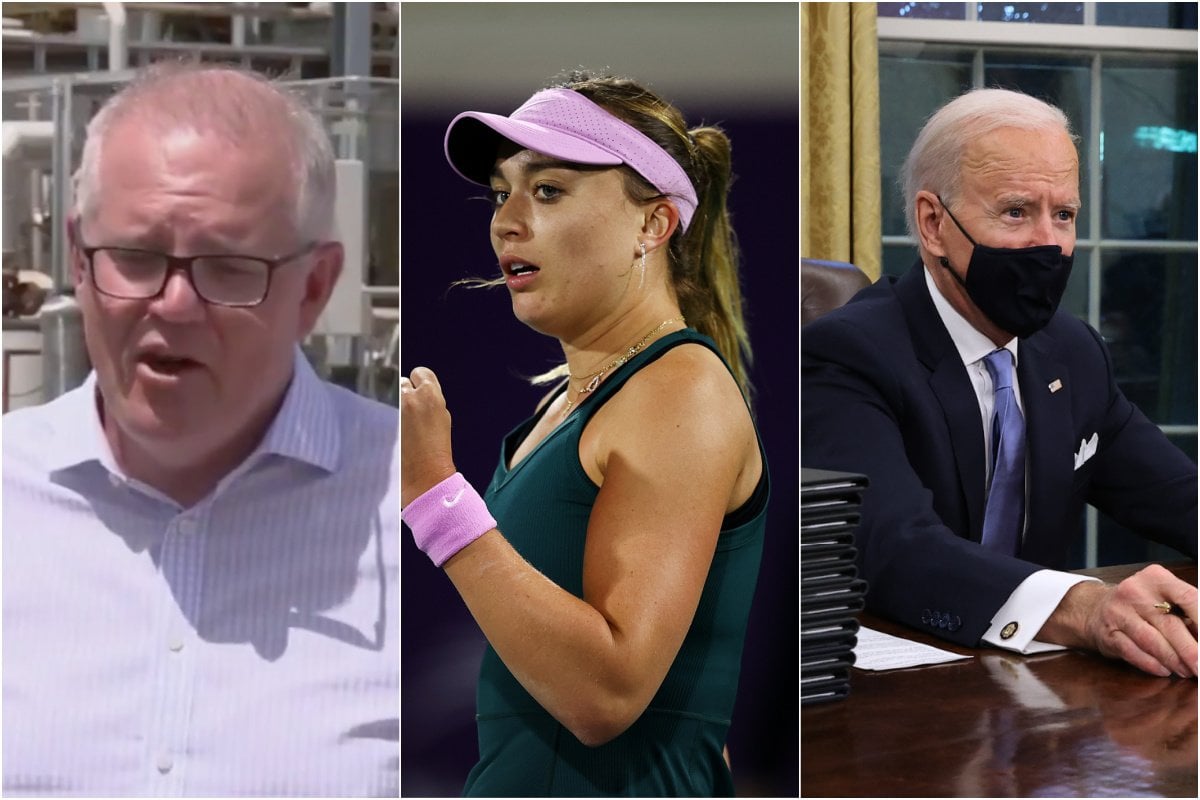 Scott Morrison has come under fire for mounting an unusual argument about why January 26 is a tough date for some people.

The Prime Minister said Australia Day - also known as Invasion Day - was an important date to reflect on how far the country had come.

He spoke about the experience of those aboard the First Fleet, who raised the Union Jack for the first time on January 26, 1788 after arriving the previous week.

Prime Minister Scott Morrison says the arrival of European settlers "wasn't a particularly flash day" for convicts on board, as he defended Australia Day being celebrated on January 26.

"On Australia Day, it's all about acknowledging how far we've come," Mr Morrison told reporters on Thursday.

"You know, when those 12 ships turned up in Sydney, it wasn't a particularly flash day for the people on those vessels either."

The Prime Minister is a descendant of William Roberts, who came to Australia as a convict aboard the Scarborough in the First Fleet.

Critics have accused Mr Morrison of drawing a false equivalence between those aboard the First Fleet and the experience of Australia's Indigenous people.

Aboriginal and Torres Strait Islander people were living on the continent for more than 60,000 years before the British arrived, and have since endured widespread massacres, oppression and dispossession.

For many Indigenous and non-Indigenous people, January 26 is a day of sorrow and mourning.

Indigenous Greens senator Lidia Thorpe said it was disrespectful and offensive to compare the experience of First Nations people with those aboard the First Fleet ships.

"Maybe the colonising First Fleet did feel sick on the boat over here," she said.

"I can tell you that we feel sick to think that January 26 is a day that the leaders of this country should choose as the national day of celebration. For First Nations people, it's like dancing on the graves of our ancestors."

How can we expect to see real progress on issues such as Reconciliation and Closing the Gap when he makes such ignorant and unhelpful comments like this?

Cricket Australia has refused to reverse its decision.

Rising Spanish star Paula Badosa has become the first Australian Open player to announce she has tested positive for COVID-19 ahead of the season's first grand slam.

The 23-year-old has been isolating in Melbourne under the mandatory 14-day quarantine rule after a tournament-chartered flight from Abu Dhabi on which two co-passengers also subsequently tested positive.

Badosa said on social media on Thursday that she had been feeling unwell and had been moved to another "health hotel" to recuperate.

Rising Spanish star Paula Badosa has become the first Australian Open player to announce she has tested positive for COVID-19 ahead of the grand slam.https://t.co/J0d6q7T6Rk

The world No.67 went on Twitter to say: "I have some bad news. Today, I received a positive COVID-19 test result.

"I'm feeling unwell and have some symptoms, but I'll try to recover as soon as possible listening to the doctors.

"I have been taken to a health hotel to self-isolate and be monitored. Thanks for your support. We'll be back stronger. Paula."

Meanwhile, the Spanish tennis federation (RFET) called on Tennis Australia to relax the restrictions affecting two of its other players, saying they could cause "psychological damage".

Qualifiers Mario Vilella Martinez and 17-year-old starlet Carlos Alcaraz have been among those isolating in their hotel rooms.

In a statement, the RFET said the pair weren't aware they would have to undertake strict quarantine without the daily training breaks that had been negotiated - something that has been categorically denied by tournament director Craig Tiley.

US President Joe Biden has launched a new strategy to curb the raging coronavirus pandemic on his first full day in office, laying out a coordinated federal response.

Biden's administration says the strategy aims to restore trust in the government, ramp up the vaccination program, expand testing and mask-wearing, safely reopen schools and businesses and advance racial equity.

The press has gotten its first glimpse of US President Joe Biden's Oval Office, showing how in a matter of hours the office has visibly transformed. #9Todayhttps://t.co/7b8PKxaKnM

"We can and will beat COVID-19. America deserves a response to the COVID-19 pandemic that is driven by science, data and public health - not politics," the White House said in a statement.

"The National Strategy provides a roadmap to guide America out of the worst public health crisis in a century."

Newly sworn in President Joe Biden and his advisers are inheriting no coronavirus vaccine distribution plan to speak of from the Trump administration, sources tell CNN, posing a significant challenge for the new White House. https://t.co/n8zKpLvUDh

The new Democratic president is set to deliver remarks on his administration's COVID-19 response later on Thursday and sign executive orders that will "jumpstart" the strategy.

The new directives will include requiring mask-wearing on certain public transport, producing equipment to expedite vaccine production, establishing a COVID-19 testing board to ramp up testing, fostering research into new treatments and bolstering the collection and analysis of data to support an equitable pandemic response.

Facebook is passing the buck for its indefinite suspension of former US president Donald Trump to a quasi-independent oversight board, setting up a major test of the recently established panel.

The social media giant said on Thursday that it believes it made the right decision to suspend Trump after he allegedly incited some of his supporters to storm the US Capitol in a deadly assault on January 6.

But it said it's referring the matter to the oversight board for what it called an "independent judgment" on upholding the decision.

Facebook passes decision on whether to permanently ban Trump over to newly created oversight board https://t.co/6hP51ZLswg

Facebook's panel is intended to rule on thorny content issues, such as when posts constitute hate speech - or if the decision to ban a world leader was the right one.

Its 20 members - which will eventually grow to 40 - include a former prime minister of Denmark, former UK deputy prime minister Nick Clegg, the former editor-in-chief of the Guardian newspaper, along with legal scholars, human rights proponents and journalists such as Tawakkol Karman, a Nobel Laureate and journalist from Yemen, and Julie Owono, a digital rights advocate.

Twitter, by contrast, permanently banned Trump from its platform.

UK Prime Minister Boris Johnson said on Thursday it was too early to say when the coronavirus lockdown in England will end.

The country posted a fresh record in daily deaths on Wednesday for the second day running, figures Johnson has called "appalling".

A prevalence survey, known as REACT-1, suggested infections had not fallen in the first days of lockdown, although the government has said that the impact of restrictions introduced on January 5 was not yet reflected in the numbers.

The UK has recorded a new daily high of 1,820 Covid deaths - the highest number since the pandemic began

The BBC's Clive Myrie has been to the Royal London Hospital where 12 out of 15 floors are occupied by coronavirus patientshttps://t.co/QOrydr5NP3 pic.twitter.com/NVm3b2niOe

French President Emmanuel Macron warned students on Thursday to expect restrictions to remain in place for much of the rest of the 2020/21 academic year.

Macron was meeting a group of students at the University of Paris Saclay to hear their complaints and concerns over issues raised by COVID-19 restrictions, such as feelings of loneliness and hits to the economy that have impacted job prospects.

The Portuguese government held an extraordinary cabinet meeting on Thursday to discuss closing the country's schools in a bid to halt a rising number of coronavirus cases.

The measures, which would include closing universities and day care centres, could enter effect as early as Friday, local media reported.

Travellers in Western Australia's north are being urged to find safe accommodation as the Pilbara and Kimberley regions brace for a tropical cyclone to be called Lucas.

A blue alert was issued by the Department of Fire and Emergency Services on Thursday afternoon for communities between Beagle Bay and Port Hedland in the Kimbeley and Pilbara regions.

Soon-to-be cyclone Lucas is tracking towards the coast of WA, prompting a warning for tourists to leave the state's north-west. #9News pic.twitter.com/kn6TEDVnHT

"Although there is no immediate danger you need to start preparing for dangerous weather and keep up to date," the alert reads.

The Bureau of Meteorology said a tropical low was intensifying as it moved towards the coast and was expected to develop into a cyclone overnight and may reach category 2 intensity late on Friday around Eighty Mile Beach.

Gales may develop on the coast near Bidyadanga and Broome during Friday afternoon and may extend to other parts of the warning area during Friday evening but gales are not likely at Port Hedland, the bureau said.

Lucas will be the first tropical cyclone to hit WA this season.

- US House Speaker Nancy Pelosi has vowed to quickly push ahead with the impeachment trial of Donald Trump saying, "I don't think it will be long but we must do it."

- Joe Biden's press secretary has held her first press conference seven hours after the inauguration, vowing to bring truth and transparency back to the government.

- At least 32 people have been killed after two men blew themselves up in a street market in Baghdad.

- At least 15 people have died in a nursing home fire in Ukraine.

- International Olympic Committee president Thomas Bach says the postponed Olympic Games will take place this summer despite surging coronavirus cases in Tokyo, and "there is no plan B."