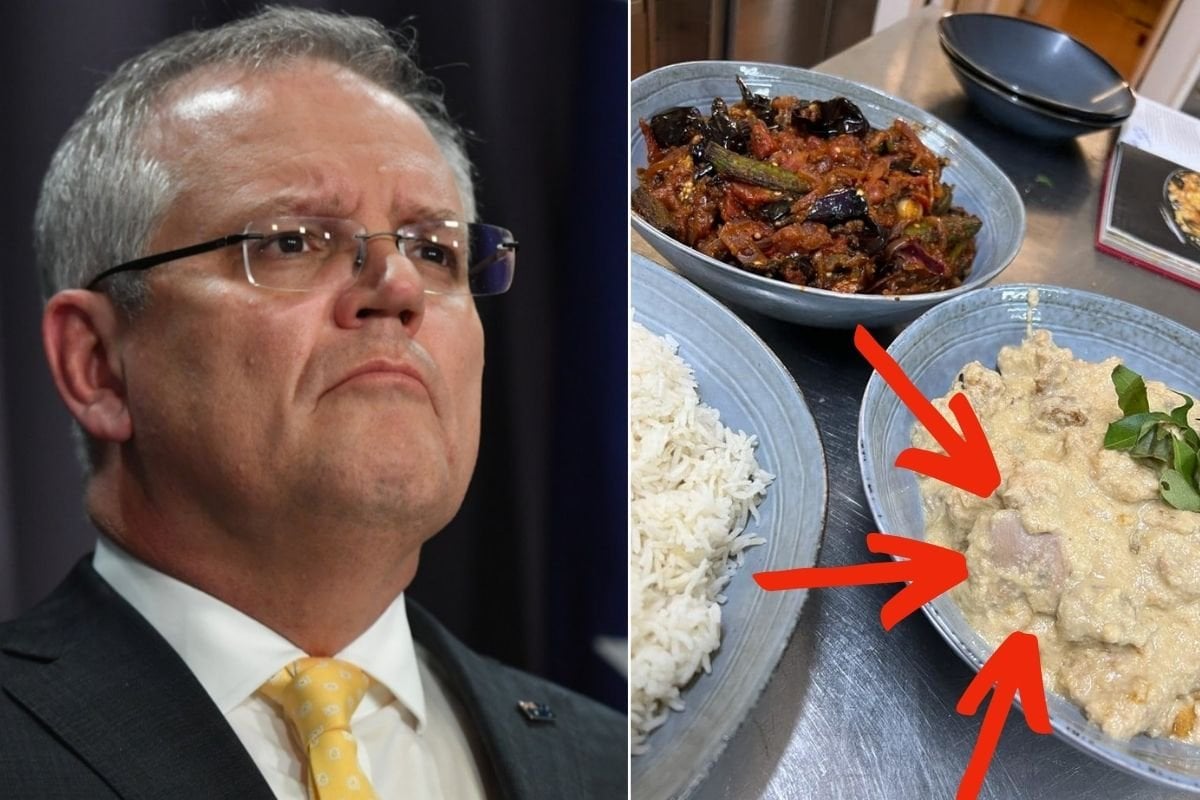 Three weeks of election campaigning down, three weeks to go. And yet all I can think about is the colour of the chicken in Scott Morrison's homemade curry.

This is particularly concerning given I am News Editor at Mamamia. My very job description requires me to be across what's happening in the news cycle, and right now in Australia, that's very election heavy.

This morning the curry-chef himself is spruiking more support for older Australians should the Coalition win the election.

His rival, Anthony Albanese, revealed a plan to cut costs of medicines on the PBS by $12.50 during Labor's official campaign launch over the weekend.

The Greens have today laid out how they aim to close the gender pay gap.

And yet. I am stuck on the curry.

'Sri Lankan chicken korma' I found myself typing into Google this morning as I went in search of what it is supposed to look like. 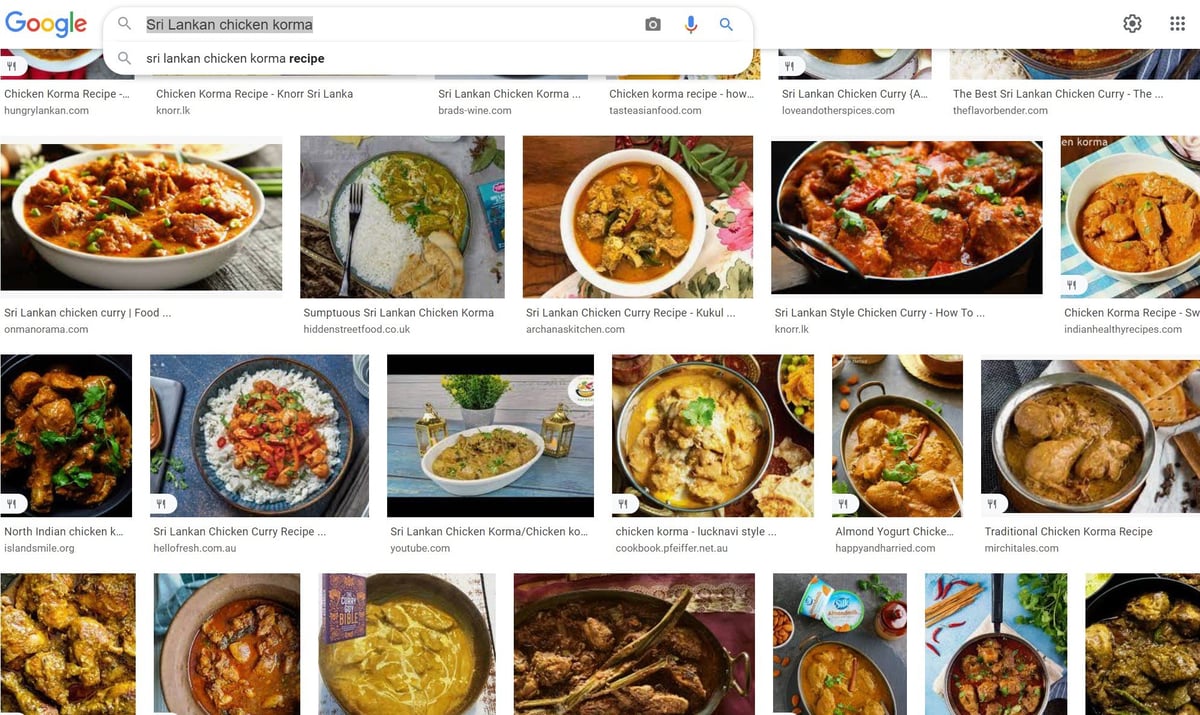 ScoMo, Sir, I think this is what you're supposed to be aiming for...?

Then there's the chicken.

Since being uploaded last night, the photo has already garnered 4.6k comments at the time of writing, and more than 800 shares.

There's a lot of focus on the chicken. But I am also fixated by the caption.

I can practically smell the PM's social media gurus crunching the numbers and reminding Scomo of how well his curry posts go.... y'see curry night is a regular occurrence in the Morrison household, and Scott enjoys an upload of his latest creations.

They're the perfect 'family-man' flex. 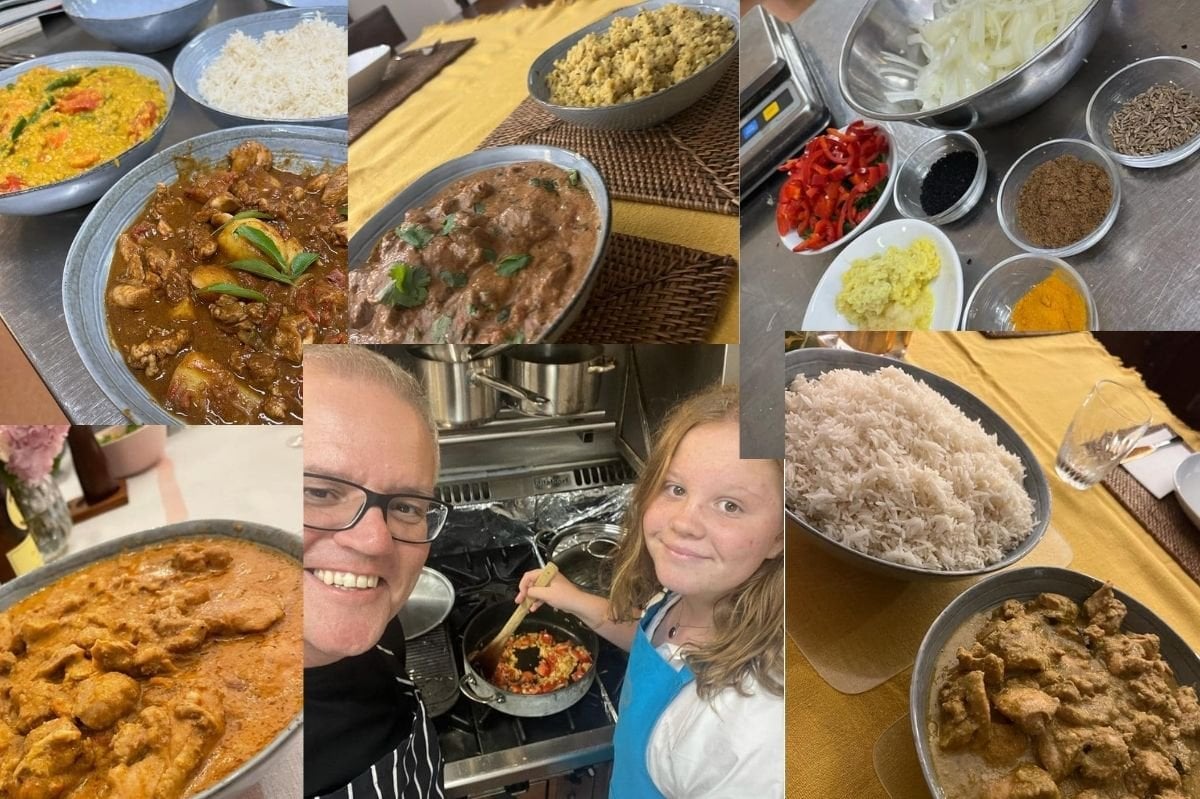 But the caption. Which genius came up with that? It's the perfect balance of 'daggy dad' while still squeezing in the party slogans. Coz you've got to jump at every opportunity to get the slogan in – there's an election to win!

Oh, to be a fly on the wall in that meeting.

See? This is where my brain is at, as we enter week four of the election campaign. The trivial topic of the prime minister's questionable chicken curry.

And there's good reason for it: this election is hard to watch.

Every day we all bear witness to the latest press conferences, front-page spreads, baby holding, photo posing and late-night gaffes.

As we emerge out the other side of a pandemic that turned our world upside down, only to be faced with unprecedented flooding up and down the east coast – choosing the next government of Australia has never felt more important. More urgent.

Women are still being murdered every week, we've been issued "code red" warnings about the state of our planet, there's growing concern about a threat from China, war is underway in Ukraine, and the cost of living is skyrocketing thanks to all of the above.

It's dire out there. And for some reason the 'electioneering' that goes alongside election campaigning feels somewhat jarring in our current reality.

Perhaps it's because in recent years the number of scandals, in-fighting and bad behaviour we've witnessed coming from our major parties can't be glossed over with a shiny election poster and a fun slogan.

Perhaps it's because our potential leaders aren't all that inspiring. Once again we've got two middle-aged white dudes gunning for top-job, and neither are particularly galvanising.

Perhaps it's because the irony of the PM posting a photo of a Sri Lankan curry, all while the Murugappan family from Sri Lanka remain locked up in community detention, as they continue a four-year fight to return to their adopted community of Biloela, Queensland.

It all just feels rather hopeless.

As my colleague Rebecca Davis wrote only a few weeks ago, 'As I head to the polls, I’ve never felt less inspired.'

According to our recent Mamamia Votes survey, 28.7 per cent of our 5000 respondents were fatigued before the election campaign had even begun.

A further 25.5 per cent felt resigned.

We are incredibly lucky to live in a democracy, where the power is in our hands. We, the people, have the ability to choose who governs our country. Not everyone is that lucky and I plan on using my vote wisely – as should you.

But there's no denying the anger this year. The apathy. The confusion, as Australians look to the current political offerings with a COVID-wearied cynicism.

It's why I can't look away from the chicken.

The chicken is a silly little detail I can latch on to, to distract me from the chaos. The ridiculousness I needed as we stare down the barrel of another 19 days of campaigning.

And besides, that chicken really does look raw.

Can someone please check on Jenny and the girls?

Reply
Upvote
This article describes exactly how I feel!
L
laura__palmer 22 days ago

Reply
Upvote
2 upvotes
Vile. He did this on purpose, so people would talk about how terrible his curry is and not his leadership
S
snorks 22 days ago

Reply
Upvote
1 upvotes
@laura__palmer yes, I'm sure that was exactly it /s.
I'm curious, do you think comments like this actually help your arguments?

Reply
Upvote
@laura__palmer I hope he did this on purpose - imagine cooking that and thinking "yep, that looks good"! 🤮
L
laura__palmer 22 days ago