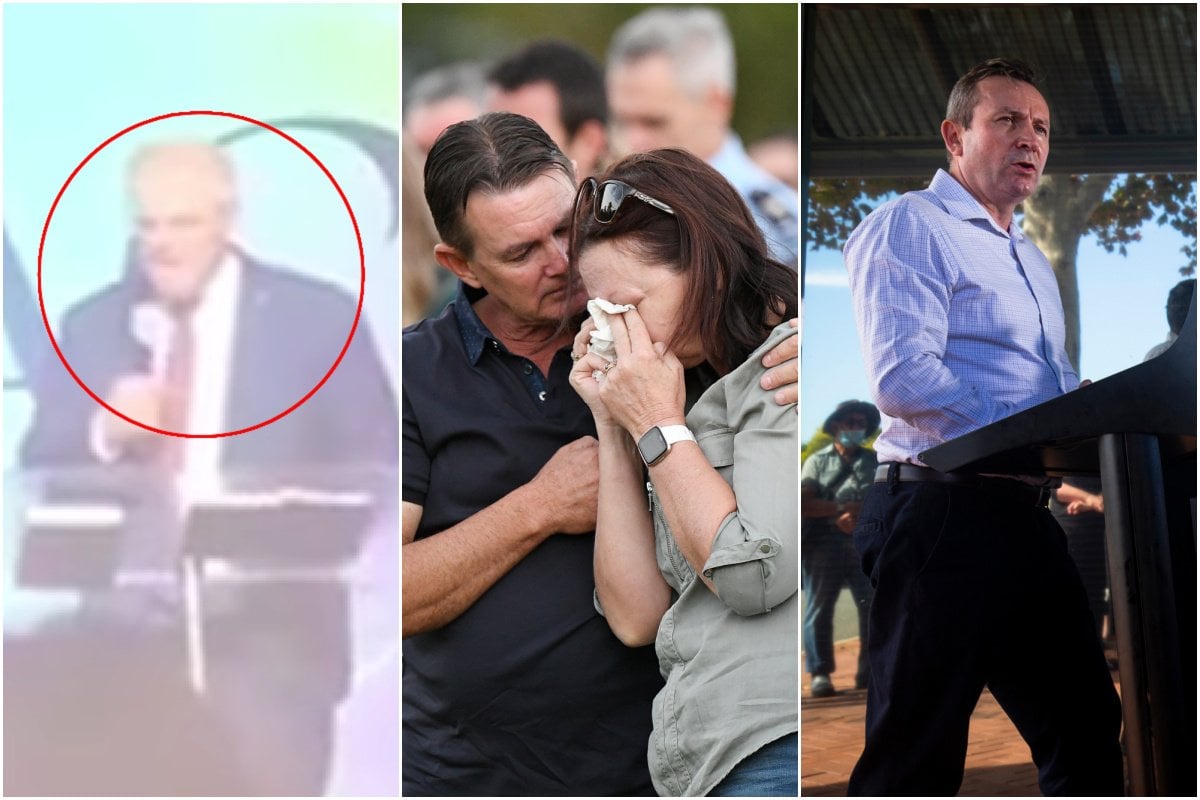 Morrison tells Christian conference he was called to do 'God's work' as prime minister.

Prime Minister Scott Morrison has told a Christian conference on the Gold Coast about his belief that he and his wife, Jenny, have been called upon to do God's work.

During the 20 minute speech Morrison spoke about identity politics threatening to steal the hope and courage of Australia's young people calling it "absolutely corrosive."

Mr Morrison, who is a practicing Pentecostal Christian, said young people are "defined by your group, not ... who God has created you to be".

"And to get lost in that group, and you know, when you do that you lose your humanity and you lose your connection I think, one to each other," he told the Australian Christian Churches Conference, which was uploaded by the Rationalist Society of Australia on Monday.

He went on to call social media the work of "the evil one" telling the crowd it was "corroding and desensitising our country and our society" and "we gotta pray about it. We've got to raise up the spiritual weapons against this."

He also spoke about looking for signs from God while on the 2019 election campaign trail, telling the crowd he had practised the evangelical tradition of the "laying-on of hands" and praying while working.

The heartbroken family of Kelly Wilkinson have remembered the Gold Coast mother-of-three as a "strong, fierce woman with an enormous heart".

Hundreds gathered in Parkwood on Monday afternoon to pay tribute to the 27-year-old, who was allegedly murdered by her estranged husband last Wednesday.

The mother-of-three was remembered by her family as a "strong, fierce woman with an enormous heart". https://t.co/pYBe0E7DL0

Local state MP Sam O'Connor read a statement on behalf of Ms Wilkinson's family that described her as a "beloved daughter, sister and mother".

"She had always said that being a mother was the best job in the world, and loved nothing more than watching the kids play," he said.

"Kelly was a strong, fierce woman with an enormous heart.

"She would help others regardless of the events in her own life, she would stand tall beside the people close to her and give more than she had."

Ms Wilkinson's estranged husband, Brian Earl Johnston, 34, has been charged with her murder.

Perth and the Peel region completed the three-day lockdown overnight after a second straight day of no new community cases.

Interim restrictions remain in place until 12.01am on Saturday, including the mandatory wearing of face masks and limits on gatherings.

Perth and the Peel region have exited lockdown as planned after no new community COVID-19 cases were recorded in Western Australia.https://t.co/veWpfOE6ND

Two locally acquired infections were found from more than 29,000 tests after the virus leaked out of the Mercure quarantine hotel.

WA's health department was aware of ventilation issues at the Mercure but had believed the risk could be mitigated.

WA's cap on international arrivals will be halved to 512 a week for the next month and Mr McGowan has not ruled out extending the reduction.

In an ANZAC Day message to staff, Pezzullo said Australia must strive to reduce the likelihood of war "but not at the cost of our precious liberty".

'Let us continue to search unceasingly for the chance for peace while bracing again, yet again, for the curse of war,” Home Affairs Secretary Mike Pezzullo tells staff in ANZAC Day message https://t.co/2rnYWEDHKs

"Let us continue to search unceasingly for the chance for peace while bracing again, yet again, for the curse of war," Mr Pezzullo said.

Last weekend, Defence Minister Peter Dutton warned a war with China over Taiwan should not be discounted.

The Morrison government will consider sending desperately needed oxygen to India, which could also face harsher inbound travel rules because of its coronavirus catastrophe.

The national security committee will meet on Tuesday to weigh up humanitarian support, with India setting consecutive world records for daily cases.

There were more than 352,000 new infections on Monday, as the United States, United Kingdom and Germany pledged supplies.

Australia is considering a request for oxygen and is likely to send non-invasive ventilators to India, where the health system is in extreme crisis.

Last week, the federal government cut repatriation and direct flight arrivals from India by 30 per cent.

Unions have challenged the Morrison government to deliver a budget for women with a suite of measures to close the gender pay gap and improve safety.

While last year's economic blueprint faced widespread criticism because of a lack of measures targeted at women, gender issues are now in even sharper focus after sexual assault allegations rocked federal politics.

Australian Council of Trade Unions president Michele O'Neil will put the coalition on notice during a speech at the National Press Club in Canberra on Tuesday.

"Many of us are wondering whether we have witnessed a genuinely transformative moment for women over the last few months or whether once the headlines die down, so will any commitment to real change," she will say.

Later in the week, Ms O'Neil will launch a suite of suggested budget measures alongside a group of women from across the political spectrum including the business community.

The ACTU argues measures to support women's workforce participation, wage equality and safety must be central to the government's economic recovery plan.

Australia Post's entire board will be hauled before a parliamentary committee with senators set to grill directors over Liberal Party ties.

Ms Holgate says she was unlawfully stood down after it emerged she gifted four Cartier watches worth $20,000 to executives who clinched a lucrative deal.

Tony Nutt, who was the Liberal Party's former federal and Victorian director and worked in senior roles for John Howard, is set to come under scrutiny on Tuesday for his conversations with Ms Holgate after the furore.

During her explosive evidence at the last hearing, Ms Holgate said Mr Nutt made it clear Scott Morrison wanted her to stand down.

"I was told, 'Christine, you need to understand it was the prime minister'," she told parliament.

"Clearly he has a very close relationship with the prime minister, but he often was the person who would be more balanced with all political parties than the other politically appointed people."

- Tokyo Olympics organisers have asked for about 500 nurses to help during the Games.

- The US television audience for the Academy Awards dropped to a record low of 9.85 million viewers compared to more than 23 million in 2020.

Reply
Upvote
6 upvotes
Very unimpressed with Morrison and his god claims.   Keep your religion to yourself and just govern the country.

Reply
Upvote
1 upvotes
@6macfam   Absolutely. When it suits him he is holier than thou.