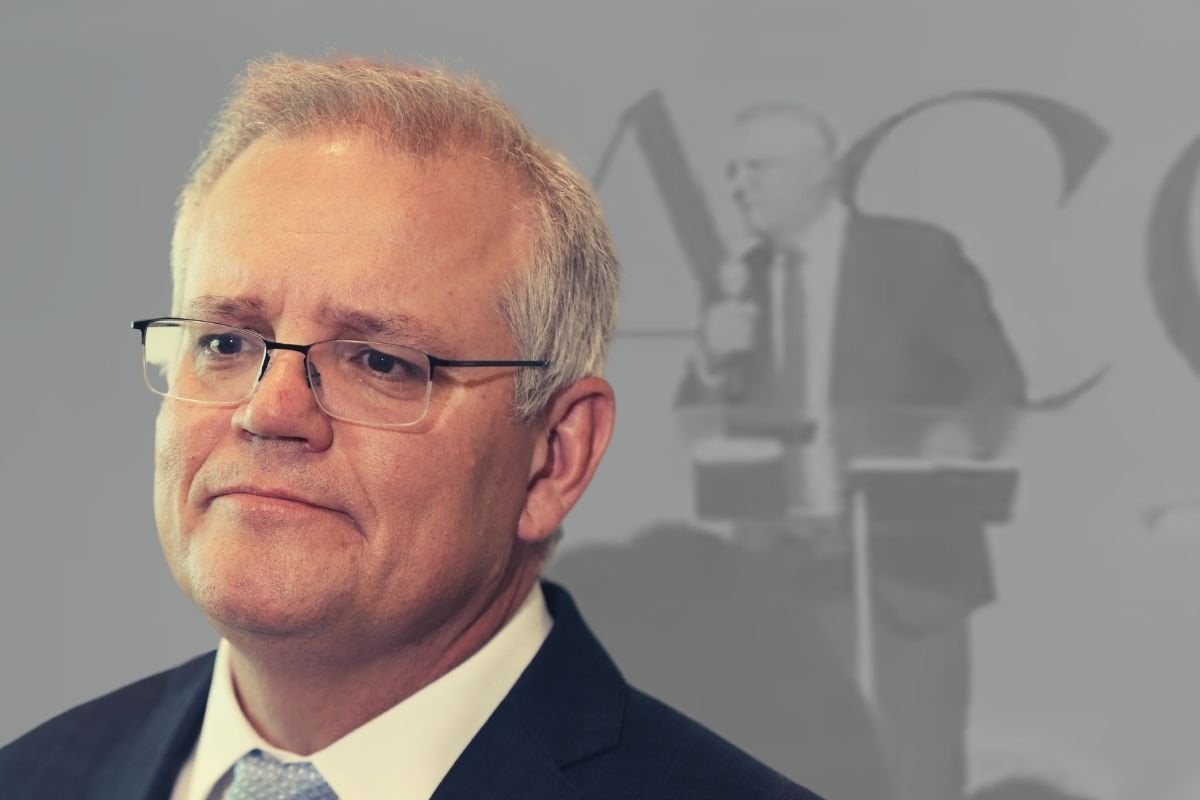 Last week Prime Minister Scott Morrison gave a speech at a Christian Convention on the Gold Coast, footage of which has now been uploaded to YouTube.

In it we see our PM speaking in a way we haven't before. We hear his opinions on topics like social media and identity politics and how his faith closely interlinks with his politics.

We knew Morrison was a practicing Pentecostal Christian. But this 20 minute speech, uploaded by secular advocacy group Rationalist Society of Australia, has given us new insight into Morrison's faith and beliefs.

Here's exactly what he said:

Identity politics is "corrosive" and a threat to community.

In quoting Rabbi Jonathan Sacks who said, "You lose your morality and you are in danger of losing your freedom," Morrison told the gathered group of Christian leaders that identity politics was a threat to community and he needed their help.

"He [Sacks] gets that the essence of morality is not what others would think it is, about sexuality and all of these issues. It's about the dignity and value of each and every human being and the responsibilities that they have one to another. You cancel out one human being and you cancel out community. Because community is just human beings that God loves. Morality is about focusing on you, not the person next to you," he explained.

Morrison asked of those gathered to "keep building community in this country," to make sure "every Australian knows that they are important."

"I'm relying on you to do that," he told them, adding that there are some "threats" to this that he wanted to share.

Watch: Morrison talking about the threat of identity politics. Post continues after video.

Morrison explained that there is a 'fashion' right now to not think of Australians as individuals.

"It's called identity politics," he said. "They think of themselves as the things they can describe that collect them with others. These are important things, one's ancestry, one's gender, where one's from... but there is a tendency for people to not see themselves and value themselves in their own right as individuals. And to see themselves as only defined by some group. And to get lost in that group... and you know when you do that you lose your humanity. You lose your connection to one another. And you're defined by your group, not by who God has designed you to be."

"It's corrosive," he told the crowd. "I think it's undermining community and self worth that Australians can have. Because if you're only defined by what group you're in, or what box you're put in... Australians need to understand that they personally and individually are unique and wonderful."

Social media is a weapon used by "the evil one."

Morrison went on to say that these 'groups' formed out of 'identity politics' lead to people being disrespectful and writing "stupid things on Facebook and the internet."

He said that while social media is great for connecting people, "those weapons can also be used by the evil one, and we need to call it out."

Morrison called on Christian leaders to help him "remind Australians how precious and unique they are."

He had a religious epiphany in the Ken Duncan photographic gallery.

Morrison then told a story about a tough week on the 2019 election campaign where he found himself thinking "God, where are you? Where are you? I'd like a reminder if that's okay."

He was at Ken Duncan's photographic gallery on the Central Coast at the time, and there right in front of him was a huge picture of a soaring eagle.

"Of course, the verse hit me," he said. "They will soar on wings like eagles; they will run and not grow weary."

Morrison said the message he got that day was "Scott, you've got to run to not grow weary."

He refers to being called on to do "God's work."

Morrison thanked the "avalanche" of support he gets from Christian Australians, telling the crowd that "I’ve been in evacuation centres where people thought I was just giving someone a hug and I was praying, and putting my hands on people… laying hands on them and praying in various situations."

Morrison said he believes God has been using him, and his wife Jenny, in times like that to "provide some relief and comfort and reassurance to people."

"And we'll keep doing this, for as long as this season is. That's how we see it. We are called. All of us for a time, for a season. And God would have us use it wisely. For each day I get up and move ahead, there's just one little thing in my head, 'such a time as this'," he concluded, quoting Esther 4:13-14.

He also made the point that, "I can’t fix the world, I can’t save the world, but we both believe in someone who can."

Here's how Australia is reacting:

Worth reading again ⁦@vanbadham⁩ on Pentecostal teaching.
Van is not the only Christian to have real concerns about “prosperity doctrine”.
As an atheist I’m horrified that Morrison’s weird “religion” influences his thinking and his politics.

Theocracies are deadly dangerous, particularly for women, the LGBTQI community and anyone who does not accept the dominant faith. https://t.co/L6VNh23vuM

I’m not remotely religious, but the mocking of the PM for his religion is only going to see non-evangelical religious Aussies feel for him. Less than one per cent of Australians are Pentecostals but millions are religious and take their faith seriously.

The Prime Minister @ScottMorrisonMP says social media is a weapon that can be used by the 'evil one'. As I've said before blaming social media for our societal woes is a totally convenient ruse. Plenty of evil happening in Australia off social media. https://t.co/5XCm2wa5M3 https://t.co/Cn8xGtxrA4

What did you make of the Prime Minister's speech? Let us know in the comments below.

Reply
Upvote
1 upvotes
I knew he was religious and conservative, but seeing this so closely intertwined with his views and the way he runs the country is scary.
I don’t think all of what he said is that bad, but the fact it’s driven by his belief in things like ‘the evil one’ is a big red flag. How can he make decision based on reason and facts as a PM?
G
gu3st 9 months ago

Reply
Upvote
2 upvotes
I'm strictly against Church being allowed into State matters, but nothing Morrison said here was too terrible. Nor, was he suggesting any erosion of the separation of church and state.
Tolerance is an important Christian (actually, societal) tenet that seems often overlooked or brushed aside by some congregations.
S
snorks 9 months ago