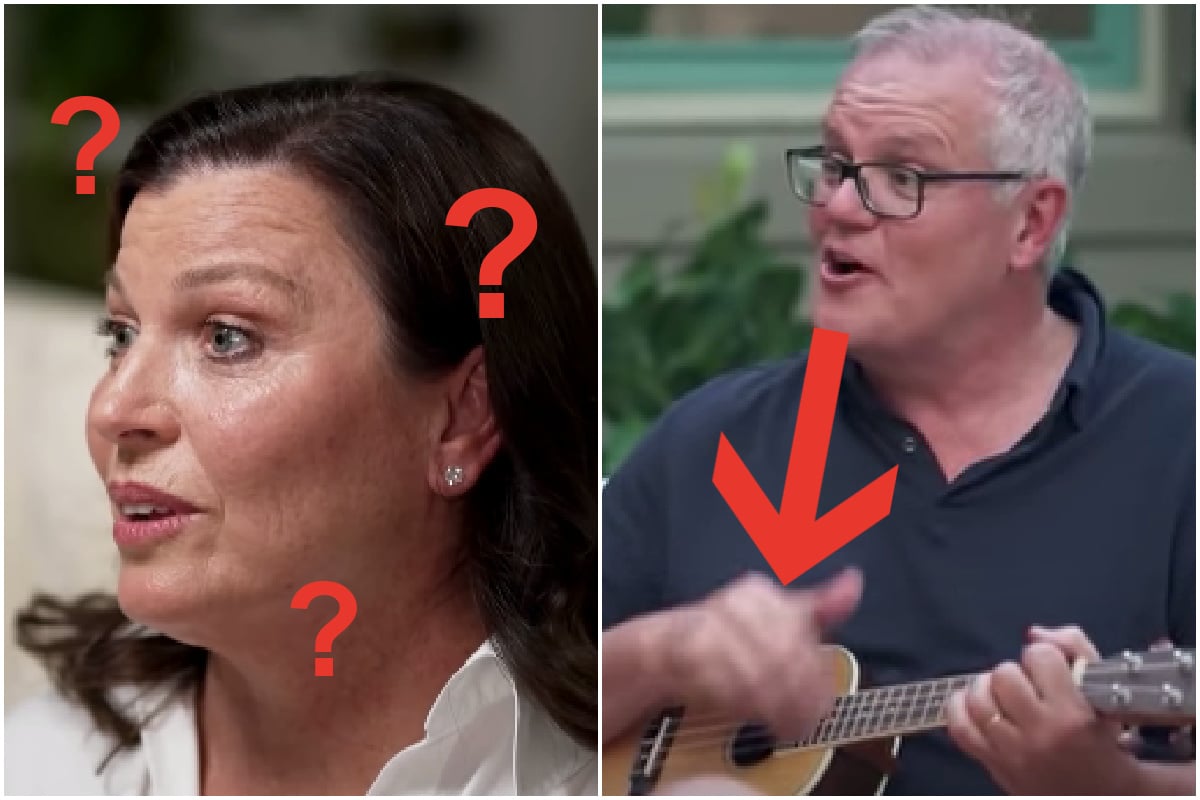 I need it on the historical record that on Sunday night, this is what happened in many Australian households:

Nearly one million people in the five metro capitals sat in their living rooms and watched Married at First Sight. It was the Commitment Ceremony. A woman yelled about period sex. A man bullied his wife and then insisted on staying with her. The relationship experts were broadly horrified.

Then it got to 8.40pm. People thought MAFS was over. But another couple seemed to have made their way to the couch.

Except one of them looked strangely like Scott Morrison. And the expert was... Karl Stefanovic?

When it became clear that Jenny was going to stay (even though she crossed out leave) almost half of those Australians switched off the television.

They had watched strangers debate whether they should, in fact, remain in their fake marriages for another week. But they certainly did not have time to watch our country's prime minister, and his wife, be interviewed ahead of an imminent election.

But I need them to know the comedy they missed. Because the more I think about Scott Morrison's 60 Minutes interview, the more ridiculous it becomes.

We begin with our prime minister cooking a two-hour curry, and with all due respect don't you have other things you could be doing such as investigating allegations of sexual assault within your workplace or securing more RATs or asking members of your own party - politely - to stop calling you names via (leaked) texts.

But no. It's curry night. And we meet a more private member of Scott Morrison's family.

Literally everyone barks at me. Image: Nine.

Over dinner, Jenny tells Karl that when Bob Hawke was PM, he just had a phone and a fax machine. "Things moved at a different pace," Scott adds and Sir you literally just made a two-hour curry. Jenny explains it was okay to have a holiday back then, but "it doesn't seem that way now."

We're shown footage of the 2019 bushfires which ravaged several states and left a lot of Australians furious with their prime minister, who was on holiday in Hawaii.

Oh, this is so awkward. No, literally no one is mad at Jenny about Hawaii. She can go to Hawaii with her kids all she wants. The issue was with the leader of the country being on holiday in Hawaii while tens of thousands of Australians - who themselves were trying to have a holiday - were trapped by fires. Fires that were destroying homes, causing irreparable damage to wildlife, and killing people. Fires that may have been prevented had the government listened to warnings throughout the year.

No one ever asked for an apology from Jenny. We're so confused. 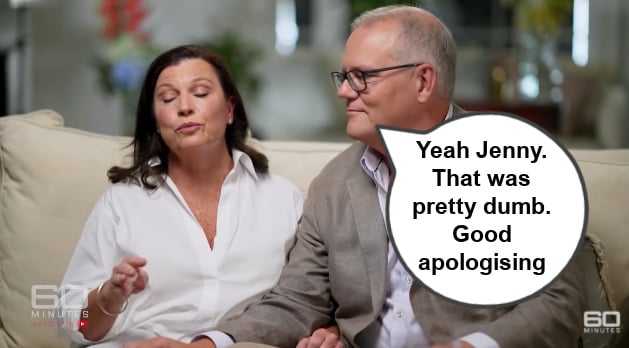 "It's safe to say they won't be taking a holiday anytime soon," says Karl's disembodied voice. "Anywhere..." and OH MY GOD THIS IS SO PETTY. YOU CAN TAKE A HOLIDAY. JUST NOT WHEN THERE'S A NATIONAL EMERGENCY AND YOU'RE LITERALLY THE PERSON IN CHARGE.

We switch gears to the time Scott dumped Jenny for two weeks when he was 16 and okay, maybe we are still watching Married at First Sight. 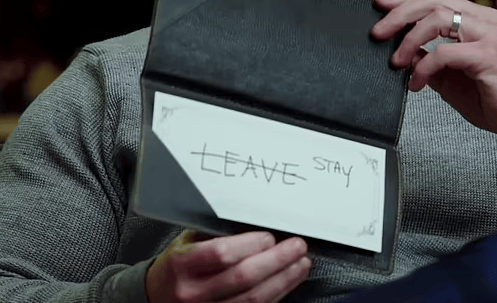 This doesn't seem... relevant. To the Australian public. Image: Nine.

Jenny admits that she's not a fan of politics and its ruthlessness. Bizarrely, instead of honing in on any of the (many) examples of political ruthlessness, she references a tweet written by Magda Szubanski. Last year, the comedy actor shared a photo of the PM and his wife saying she thought it was "a photoshopped Handmaid's Tale meme".

At the time, Szubanski argued that being in the public eye, and therefore accountable to public scrutiny, was part of the job for Jenny. But Scott doesn't agree.

Where Jenny is the sole spokesperson for your political controversies. Except for... that.

Karl points out that the prime minister has dropped his wife's name at key moments - telling the media she buys their rapid tests (so, no, he doesn't know how much they cost), and that she told him to consider Brittany Higgins' allegations of rape within Parliament House "as a father".

Jenny explains that, in reference to Higgins' allegations, she told Scott: "I want to know that our girls are safe."

But this isn't about your girls. This is about other girls and women - one in particular - who says she wasn't safe.

"I feel happy that my girls, in 10 years' time, heaven forbid if they want to go into politics, can walk safely around," Jenny says, and pause.

WHY IS THIS ONLY ABOUT YOUR GIRLS.

But shh because it's time for Karl to ask about Grace Tame, and yeah, Jenny thinks she was kinda rude. To the man. Who can only understand sexual assault. When his wife explains it. In the context of his daughters.

"I just wish the focus had been on all the incredible people coming in," Jenny says, because tbh focusing on the Australian of the Year's work as an advocate against child sex assault is a bit of a downer.

"I just found it a little bit disappointing because we were welcoming her in our home," she adds.

Of course, it's not 'their home'. It's taxpayer funded. And they weren't inviting her into their home for a friendly dinner, but as part of her official role as Australian of the Year.

But really, Scott Morrison's face during the whole exchange - where he remains silent - says it all.

Anyone know why she might be in a bad mood? Anyone? Image: Nine.

Does Jenny want her daughters to grow up to be like Grace Tame? Not really.

She thinks they can be "fierce, strong, independent, amazing people... and [still] show kindness to other people and be polite and have manners," like their father - Scott - who is always very polite. Especially in the workplace.

Karl then asks about Peter van Onselen's question time bombshell - where he read leaked texts describing the PM as a "complete psycho" and a "horrible, horrible person."

For reasons that are unclear, the Morrisons go to Queensland and Karl comes with them. A few older men in a pub seem to like Scott Morrison and Karl wonders whether "the pub has been stacked... or he's got more supporters than the polls indicate." We think it's likely that neither are true and a random pub in Queensland is probably not a perfect representative of the Australian population more broadly. 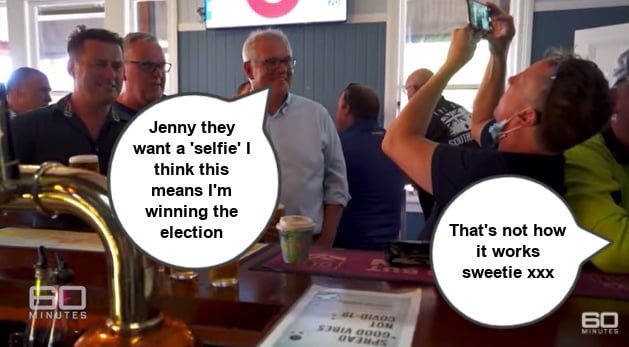 But then it happens.

We're at Kirribilli house. The curry has been eaten. Karl has overstayed his welcome. And a producer (who usually works on MAFS but thought this seemed rogue) has found a ukulele.

The prime minister starts to play it. He's singing. Jenny's singing along. And it's exactly like the scene in Step Brothers where the family start harmonising in the car except ScoMo forgets the words and he's also terrible. 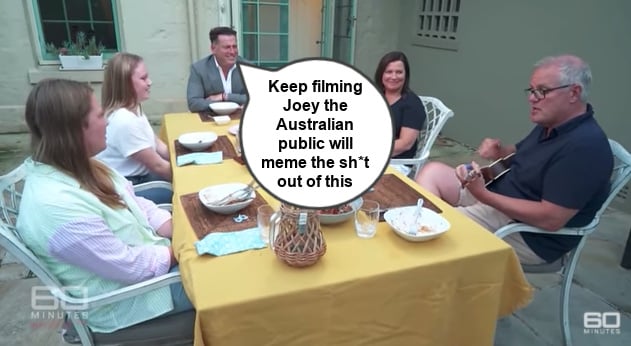 It's the stuff of nightmares. Who taught him this? Who bought this ukulele? And why won't he stop.

But we feel like Jenny will have some feedback about his musical performance at the next Commitment Ceremony - where the experts will explain to Scott the importance of accountability. Both in your marriage, and in your capacity as the literal prime minister of the country.

Reply
Upvote
Clare Stephens you have totally nailed this👏🏻🤩 I felt an overbearing awkwardness on behalf of Scotty and Jenny just reading your article! Such lack of self awareness ... totally blows my mind 🤯
M
maryc 6 months ago