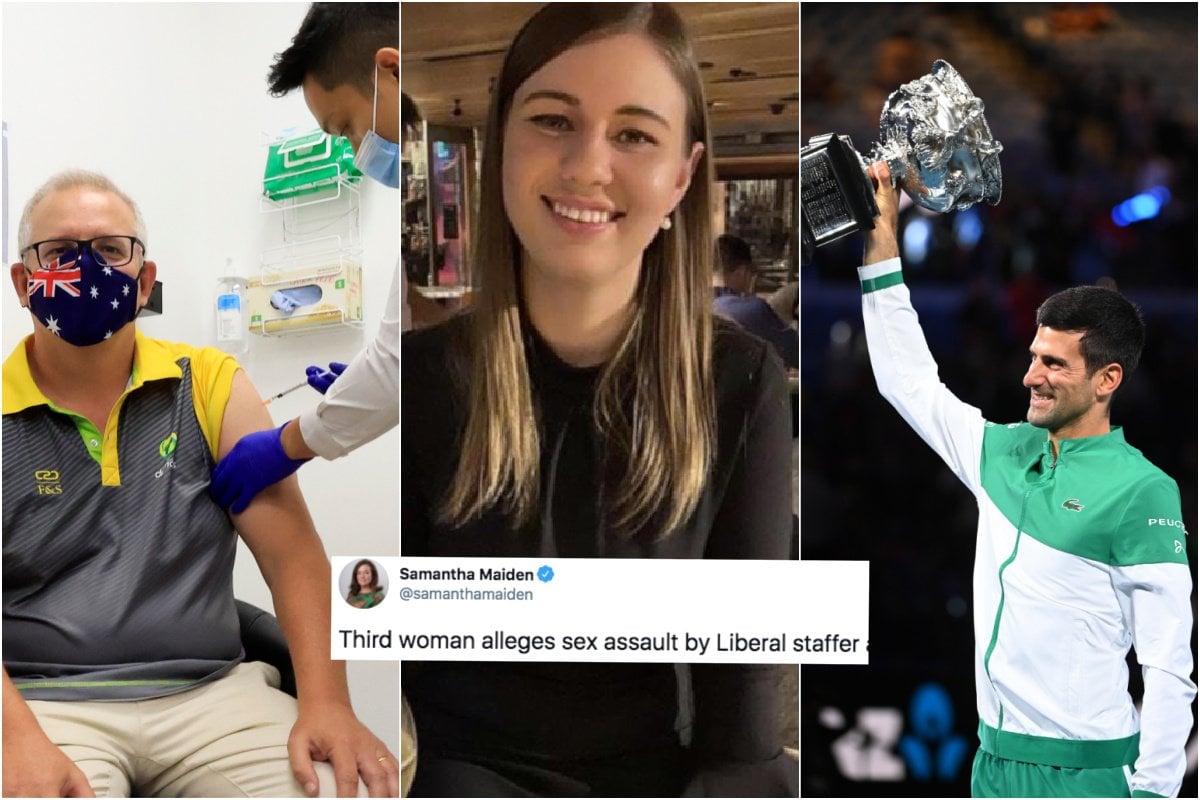 Prime Minister Scott Morrison became one of the first people in Australia to be vaccinated against COVID-19 on Sunday in a "curtain-raiser" to Monday's national rollout.

He was one of twenty people, including a World War II survivor, who received the first dose of the Pfizer vaccine at a medical clinic in Castle Hill in Sydney's north-west.

"I have, by my own example today, joined by the Chief Nurse of Midwifery and the Chief Medical Officer of our country, together with those Australians who are in the top priority of this vaccination program, to say to you, Australians, it's safe, it's important," Mr Morrison said. 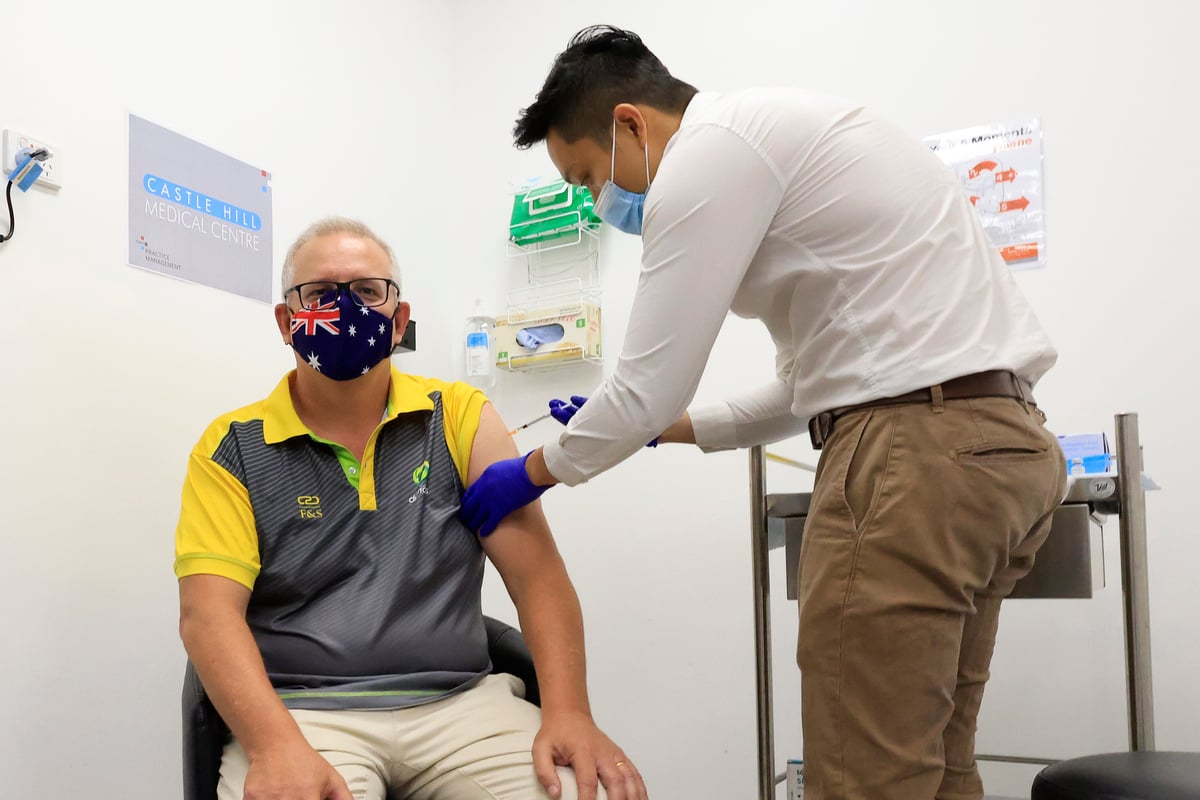 "Today I put my shoulder to the job and that is what I am asking Australians to do, in joining me and all of their fellow Australians as we continue on the successful path we have been on."

He confirmed that Health Minister Greg Hunt and former Chief Medical Officer Brendan Murphy would receive the alternative AstraZeneca jab when it becomes available at a later date.

Health workers on the frontline of Victoria's battle with COVID-19 will be some of the first to receive the jab as the vaccine rollout officially begins today.

HAPPY V-DAY: All systems are go for Australia's COVID-19 vaccine rollout. Sixty thousand Australians will roll up their sleeves in the first round, which starts at 8AM. Stay tuned to TODAY for the latest on the vaccine rollout from around the country. #9Today pic.twitter.com/3ZUDSCra2D

Victoria's first 12,000 doses of the Pfizer vaccine arrived on Sunday afternoon at Monash Hospital in Clayton where they are being kept at minus 70C.

They will begin being administered on Monday morning, with high-risk frontline health staff first in the queue.

Not everyone is on board, however, with hundreds of protesters gathering at a rally in Melbourne's Fawkner Park on Saturday. Police made over 20 arrests at the event.

Hundreds of anti-vaccination protestors have gathered at Fawkner Park in South Yarra ahead of Victoria’s #COVID19 vaccine rollout, which begins on Monday. https://t.co/5zYfOfohG3 #7NEWS pic.twitter.com/GTVe1mVbaW

Prime Minister Scott Morrison can expect to be quizzed further by the opposition and journalists on what he and his staff knew about the alleged attack of former Liberal staffer Brittany Higgins when politicians return to Parliament House for another sitting week.

Higgins' allegation of rape in 2019 surfaced a week ago, with a second staffer alleging she was also attacked by the same person a year later.

On Monday, The Australian reported a new complainant, a Liberal Party volunteer, who says she was assaulted after a night drinking with the man.

The publication says she woke up with her blouse buttons opened and her jeans pushed down and the staffer "lying on top of me" after he offered to "look after her" at his hotel room after buying her rounds of strong drinks. She later discovered that she was bleeding after fleeing the room.

After hearing Ms Higgins' story, the woman says she thought "it was so eerily similar, it made me think this person has a pattern of behaviour," adding that that attack left her feeling "severely embarrassed about it and felt dirty and ashamed."

Deputy Labor leader Richard Marles agreed with the prime minister that the culture of parliament needs to change but unlike Mr Morrison, he wants an independent inquiry.

"It can't be partisan," Mr Marles told reporters on Sunday. "This applies to all of us – the failings in respect of the culture in Parliament House is an indictment on all of us."

Former deputy Labor leader Tanya Plibersek also believes there is more to the events that followed the alleged attack on Ms Higgins than are being told.

Hitting back at his detractors and slamming the doubters, Novak Djokovic says his ninth Australian Open triumph was among the most challenging of his grand slam career.

The Serb was savaged pre-tournament for detailing a list of so-called quarantine demands for the 72 players holed up in hard lockdown, then accused of exaggerating an abdominal injury during his five-set third-round win over Taylor Fritz.

While admitting that the criticism had hurt him, Djokovic explained how he'd developed a thick skin to block it out.

"Emotionally (this) was one of hardest tournaments I had, to be honest, with quarantine and a lot of things happening in the media," the world No.1 told Nine.

"The letter that I wrote, ideas and recommendations that I got from players was misinterpreted as my request and list of demands. Then the next thing you know within a couple of days I'm persona non grata in this country.

"I got injured in the third round. It was a rollercoaster ride if I can define it in one word. I think it makes it even sweeter for me."

The 33-year-old said he spent countless hours in between matches having treatment so he could keep going.

Prince Philip is spending his sixth night in hospital in London.

The Duke of Edinburgh, 99, was admitted to the private King Edward VII's Hospital on Tuesday evening as a precautionary measure after feeling unwell. He is said to have walked in unaided.

His eldest son Prince Charles was the first member of the royal family to visit when he made the 320 kilometre round-trip from his home in Gloucestershire on Saturday afternoon.

Prince Philip has spent a fifth night in a London hospital after being admitted last week.

It is understood that Charles wanted to visit his father due to Philip's extended stay.

Charles, who arrived in a Tesla car, stepped out wearing a face mask, before leaving the hospital about 30 minutes later.

It is thought Charles had not seen his father since before Christmas because of the nationwide coronavirus restrictions, with Philip staying at Windsor Castle with the Queen.

Americans may still need to wear masks in 2022 even as the country relaxes other restrictions to combat COVID-19, the nation's top infections disease expert Dr Anthony Fauci says.

While daily infection rates are coming down dramatically, thousands of Americans still die every day from the virus, and less than 15 per cent of the US population has so far been vaccinated against it.

President Joe Biden is trying to accelerate the campaign to vaccinate most American adults as local governments clamour for more doses to prevent the virus that has claimed nearly 500,000 lives in the US.

Dr. Anthony Fauci called the United States' approach of half a million deaths due to Covid-19 "terrible," "really horrible" and "historic" Sundayhttps://t.co/JoKbZMQdmU

Fauci, Biden's top medical adviser, told CNN on Sunday that the approaching deaths tally was "a terribly historic milestone in the history of this country".

Asked if Americans should expect to still be wearing masks into next year, Fauci said: "I think it is possible that that's the case".

"Obviously, I think we are going to have a significant degree of normality beyond the terrible burden that all of us have been through over the last year," Fauci said.

US President Joe Biden has approved a major disaster declaration for Texas, which has suffered widespread power blackouts and water shortages during a deadly deep freeze.

Millions of residents in Texas have dealt with power outages, and nearly half of the state's residents on Friday had to endure disrupted water service.

Nearly 70 deaths have been attributed to the storm and a frigid snap.

It makes federal funding available to individuals across the state, including assistance for temporary housing. home repairs and low-cost loans.

Biden is also weighing a trip to Texas to survey the federal response to the first new crisis to develop since he took office a month ago.

All the state's power plants had returned to service, although more than 195,000 homes remained without electricity on Friday morning, and residents of 160 of Texas' 254 counties had water service disruptions, according to the Texas Commission on Environmental Quality.

- On Monday, Christchurch will pause and remember the 185 killed in a major earthquake on February 22, 2011.

- The UK government has pledged to speed up its coronavirus vaccine rollout, vowing to offer a first jab to all adults by the end of July.

Been listening to The Quicky? Want to win $50? Take our 3 minute survey now:

Reply
Upvote
1 upvotes
Spose diddems PM didn’t know about these incidents either.  ‘Nobody told me’  ‘it’s not my fault boo hoo’. Honestly,  do they think we are stupid.  Maybe he can run home to wife for more tutoring.
W
warmfeet a year ago

Reply
Upvote
See the mistake they made with Scomo ? They left the cap on the needle.... they must think the public are stupid
K
kelly a year ago

Reply
Upvote
@warmfeet  Well what did you expect diddems didn’t have Jenny there to hold his hand.
M
mamamia-user-482898552 a year ago

Reply
Upvote
2 upvotes
@warmfeet Hate to rain on your conspiracy theory parade, but that's not a cap. That orange thing is the needle hub.
K
kelly a year ago