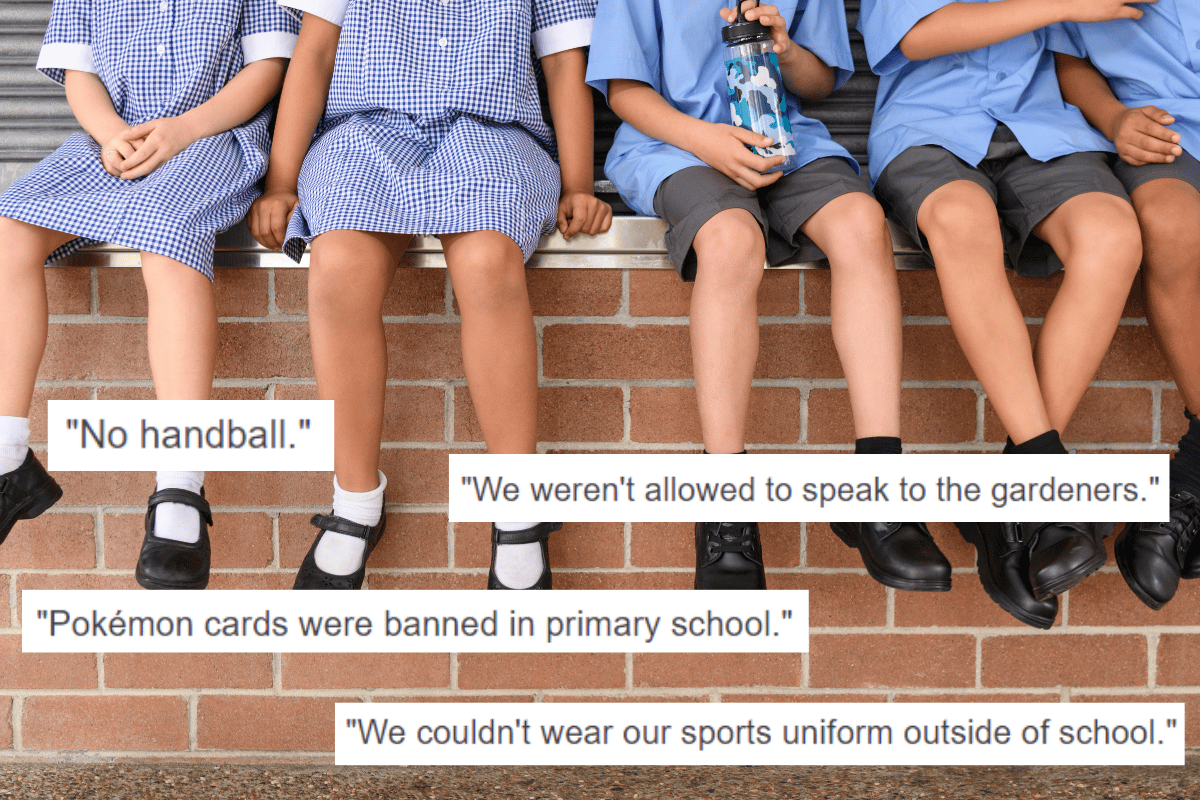 If there's one thing all schools have in common, it's bizarre school rules.

Whether you went to a public, private, Catholic school, all-girls school or anything in between, there's a good chance you would have been forced to follow some truly questionable and quirky rules that made no sense at the time (or even now).

Which is why it comes at absolutely no surprise, that a thread asking people to what "the dumbest rule your school enforced?" is trending on Reddit.

From a ban on running to taking off the boy's bathroom doors, some of the responses were downright crazy.

Off the back of the thread, we decided to ask the Mamamia community to share the strangest rules they had to follow at school. And oh boy did the responses come flooding in.

From no high-fiving to folded socks, here's all the weird school rules we haven't stopped thinking about since we left school.

No hugging or high-fiving.

"No hugging - had to maintain bible distance." - Lucy.

"No touching, hugging, hand shakes or high fives etc. I got an hour-long detention for hugging my friend who was crying."- Jess.

"In year nine we had a one metre rule from the boys - it was a boarding school, but the rule didn't exist in any other year groups or campuses." - Genevieve.

"It wasn’t written anywhere but opposite genders had to stay 30cm away from each other at all times." - Pip.

What we couldn't wear.

"We could only wear religious jewellery like the cross and if it wasn't a religious symbol, we had to get permission from one of the reverends that we were allowed to wear it." - Emily.

"I was once wearing a breast cancer ribbon on my school blazer and the head mistress was doing uniform checks and looked at it and said, 'Admirable, but take it off'." - Emma.

"Earrings had to either be studs or hoops that were small enough so that a teacher could not put their little finger through the hoop. I remember a male teacher demonstrating this on my gold hoops that were not regulation size. Eww." - Laura.

What we had to wear.

"We had to wear brown regulation undie covers (not sure of the real name) and had undie inspections! Would so not be allowed these days!" - Samantha.

"We had to wear white ribbons in hair (hair up compulsory obviously). Red ribbons symbolised senior school - year 11 and 12 only." - Isobel

"Often prefects would stand outside the school in the mornings and ask us to reach for the tree branch, if they could see the top of our knee caps we were sent home for having our skirt too short." - Sara.

"Our socks HAD to fold. Our principal literally used to say at assembly 'I’ve been told my socks must fold'."- Nicolle

"We could only wear one set of stud earrings and they had to be pearls." - Abby.

"We had random uniform checks on entrance to the school. Teachers would stand out the front like boarder security. They checked skirt length was over knee (we had to kneel to prove it sometimes.. so weird), sleeper earrings no bigger than a pinkie finger to fit in the loop, blazer is to be worn to and from school every day in terms two and three." - Alyssa-Jane.

The games we couldn't play.

"No handball... devastating. Or cops and robbers!" - Gemma.

"At my all girls, very white Catholic school, the principal banned krumping (as in... the dance) because people had krump battles at lunch time and they ended up in fights" - Chelsea.

"Pokémon cards were banned in primary school because the black market trades got too intense." - Caitlin.

The hair and makeup rules we had to follow.

"We weren't allowed to have 'bits' of hair out like little bangs or baby hairs had to be pinned." - Emily.

"We weren't allowed to wear makeup, and I once got a detention for wearing mascara when I didn't have any on." - Polly.

"No one was allowed to dye their hair. If teachers suspected that you did colour it you were called out in a full school assembly and asked to come to the stage and sit there. You were then grilled at the end of the assembly and asked to change it back (mind you this would be dying it again?! A point no teachers ever like being pointed out). You were also given detention or what ever favourite punishment was popular that week. Ps. A few times natural blondes where called up and had to try and prove they hadn’t dyed their hair. It was f**ked." - Victoria.

The rules that applied even outside of school.

"We couldn't wear our sports uniform outside of school." - Abby.

"We weren't allowed to go to any shops in our uniform. Not even the corner sweet shop. So you had to change into 'home' clothes to go get a snack." - Katie.

"We were not permitted to sit down on a train or at a train station in our uniforms in case we occupied a seat that a member of the public would like." - Sara

"Not allowed to eat outside of the school in your uniform, because it’s not polite to be seen eating, particularly on the street while you walk. I still think about it now if I’m eating while walking!" - Tilly

Some more truly bizarre rules we had to follow.

"We weren't allowed to speak to the gardeners." - Eleanor.

"We weren't allowed to bring phones to school, and they used to search our bags. I remember one day they even searched in my friend's lunchbox." - Amy.

"My high school grew out of the building we were in so they hired some office building across the road, which brought in a whole bunch of new rules. No talking to the other people that worked in the office, we had swipe cards to get in, had to eat in offices separated by grade." - Emmeline.

"My brother's school had a colour level behavioural system and if you dropped colours then you couldn't do certain things, like if you were a boarder you couldn't get leave, or then if you went up a level that gave you access to other things, like you could drive your car to school." - Abby.

"If you went to the health centre at school, they immediately put you on a food strike (so no food for 24 hours). Not sure if that's a medically approved thing, but they did it... so when I was in there and STARVING, I created a genius pulley device so that I could chuck a bag on a rope out of the fourth-floor window and my mate would fill it with Maltesers and I'd yank it back in." - Katie.

What bizarre rules did you have to follow at school? Let us know in the comments below.