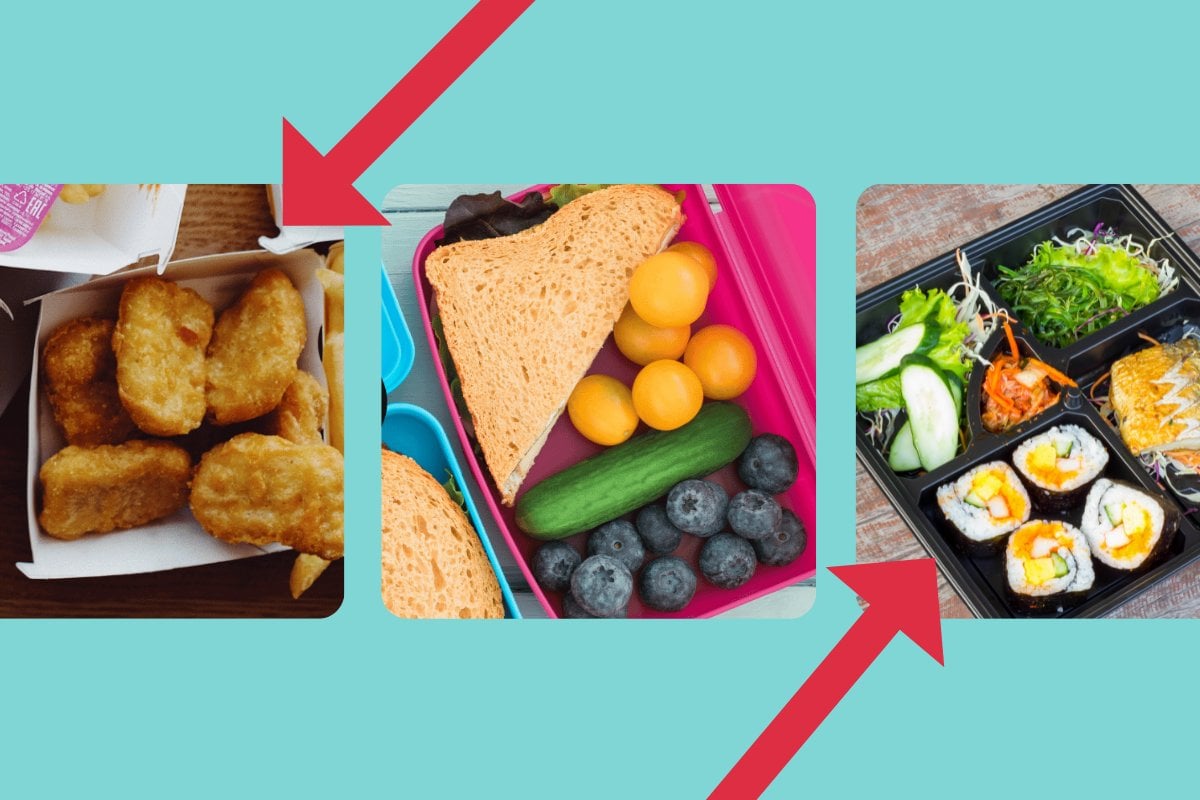 School and daycare lunchboxes are a daily chore for most parents and caregivers. Parents regularly question whether is it healthy enough, or whether any of the food will actually get eaten.

Teachers worry that some kids don't get enough of the right foods to help them learn, or in the worst cases, have no lunchbox at all.

These twelve parents and teachers tell Mamamia about their lunchbox shaming stories; what they did and how it made them feel.

"My 5-year-old has been told his baked snacks were unhealthy, which was not the case as my snacks are homemade and very healthy. He then started not eating them and asking for them to eat on the way home from school as he was hungry.

"I was very upset to see him hungry and being shamed over food and very disappointed that the staff member at the school was teaching him the wrong thing as the muffin contained very healthy ingredients and very little sugar.

"Not to mention that any issue such as this should involve talking to the parent instead of shaming a five-year-old in front of peers. I was shocked at being judged so harshly, and annoyed that my son was being told the wrong thing. I think there will always be kids with very unhealthy lunches and those who are not fed at all. These are the children and parents who may need support from the school."

"I’m a teacher and I’ve seen fabulous lunch boxes and ones that are s**t. I ask kids to eat something healthy first if they have it but otherwise, I try not to interfere. When you make a suggestion parents overreact and make sweeping comments (especially on social media).

"Some of the worst lunchboxes I’ve seen were packets of chips, chocolate bar and a soft drink (every day), Maccas every day, and things that kids can’t open. If you’re going to give your child something please make it easy for them to open.

"I’ve also had parents that pack fantastic lunches with lots of bits and they tell the kids they have to eat it all. When this happens kids don’t play as they spend the entire time eating and that’s a shame.

"But feeding your child is what matters, and I’ve had kids that come with nothing and it’s truly sad."

"I’ll be fully honest, I am an early years educator and I have definitely judged some parents' lunchboxes. But I have also seen some truly inappropriate lunch boxes for children.

"We don’t ask much, I don’t expect children to eat sandwiches and fruit for lunch, neither I nor my daughter do – but there are some inappropriate lunch boxes getting round.

"I've experienced it in a different way. My kids don't have sandwiches every day. I cook just about everything from scratch for them. Often my daughter is told 'eat your sandwich first!' yet she doesn't have a sandwich. Some days she has dinner leftovers in a thermos, other times it is chicken and a salad. It might be a savoury muffin with some fruit. She sits at kindy (school) worried about what to eat some days.

"Telling children to eat their sandwich first makes huge assumptions about Australian families, that are incorrect. I've taught many students who bring sushi for lunch or soup on a cold day.

"As a teacher, KFC being dropped off was pretty appalling. For context, the parents worked shift work and woke at midday and dropped it up. At least they were fed but..."

"OMG I’ve had the lunchbox shame at preschool! Notes coming home with 'this is not an appropriate preschool food', when they thought the homemade banana bread I made was cake."

"My teenage daughter goes to school with a whole heap of ‘junk’ in her lunchbox every day. She has endometriosis and genuinely does not know from one day to the next what her body will decide she can eat.

"You never know what the background is to someone’s lunch, so leave them alone!"

"My son’s old school had a 'healthy lunchbox' policy, and the teachers were quite officious in policing it. If kids had things that were deemed 'unhealthy' they were told they couldn’t eat them and had to take them home.

"Once, my kid had a homemade muffin - medium-sized with lots of fruit and very little sugar. He was told to put it away. I asked the teacher about it and they suggested I should have packed something 'healthier' like a muesli bar. I told them that had more than twice the sugar of my homemade muffins and they just shrugged. I was angry that the policy was being policed based on uninformed opinions rather than on knowledge about what constitutes 'healthy'.

"I noticed that they never commented on anything that looked like banana bread though - even if it had choc chips in it - so from then on, everything was made in loaf tins and sliced like bread!"

"If I was to be shamed for my kids' lunch, I would be p***ed not because I don’t want another person telling me how to parent, but because there is a reason my son's lunchbox is the way it is.

"My son has autism, and food is a huge sensory issue. He has to have the same food every day, cut and wrapped the same too. My son is now 12 and the variety of food he eats is limited. I put food in there that he will eat.

"I can put the healthy fruit and vegetables in there to my heart's content but he will not eat it. I’ve struggled with his eating for many years and feel guilt for being a bad mum cause he won’t eat a wide variety of food. What I’m trying to say is - don’t be quick to judge."

"My son had food allergies and at preschool, I had to take the wrapper off his LCM bar or the other kids would tell him off. He was only allowed to eat about 12 products at the time. Other parents commented as well.

"You would be horrified by the amount of rubbish [waste] schools now have to deal with over the last 10 years. My best friend (a teacher) had to buy bigger bins for her classroom because of packaging. Gone is the sandwich and fruit. It is very elaborate and I feel there is a lot of pressure on parents to provide above and beyond these days. The cost alone of some options is staggering."

"The kindergarten director pulled me aside in front of other parents and told me that the three marshmallows in the lunchbox were unacceptable as they were too sugary. My son also had a dark rye sandwich, cheese, strawberries, apple, a banana and carrot sticks.

"I took the marshmallows out and walked away. She then said 'before I forget, this is our latest fundraiser!' It was with Krispy Kreme! I laughed and said 'you’re having a go at me for three marshmallows and now you want me to sell Krispy Kreme doughnuts?' I screwed up the paper she handed me and gave it back, and returned the marshmallows to his lunchbox!"

"My daughter's kindergarten teacher had a crack at me about the chocolate brownie she had in her lunch and then proceeded to say all the reasons this was bad parenting and further mistakes wouldn't be tolerated!

"She had no children, fresh out of university and the brownie was a leftover from a birthday party. The next day, the same daughter brings home the annual fundraiser flyer from the same kindergarten teacher. What was the event? A huge lolly drive. Go figure!"

"From a teacher's point of view, we understand how hard it can be to organise and pack children's lunch boxes and appreciate the thought and effort that most parents put in.

"Then we have students who get packed a fruit 'roll up' or a little chocolate and chips every day and their body does not process sugar very well which leads it to impact their behaviour."

For parents looking for practical and healthy lunchbox recommendations, many mums from the Mamamia community suggested checking out paediatric dietitian, Dr Kyla, on Instagram.

Reply
Upvote
1 upvotes
My son has autism & sensory issues, and largely eats processed food. I've tried packing fresh vegetables and sandwiches and he just doesn't eat them. I live in dread of a rude note appearing in his lunchbox.
M
mel.nardi 22 days ago

Reply
Upvote
1 upvotes
I got a note home from preschool for sending FOUR individual Smarties in my daughter’s lunchbox. Not a box of Smarties, just four individual ones! I think teachers need to look at the rest of the lunchbox and take into account the ratio of what’s in there. And how often the sugar being bought to school occurs. The rest of the lunchbox could not be faulted, in my opinion- sandwich, fruit & veg. The Next week they had an easter egg hunt- go figure!
News
General
Opinion
True Crime
Politics
Sport
Explainer
Entertainment
Celebrity
Reality TV
Movies
TV
Books
Rogue
Royal
Lifestyle
Beauty
Fashion
Weddings
Home
Wellness
Health
Fitness
Travel
Food
Parents
Before The Bump
Pregnancy
Baby
Kids
Teens
School
Parent Opinion
Work & Money
Money
Finance
Career
Lady Startup
Relationships
Sex
Dating
Separation
Friendship
Family
Real Life
Couples