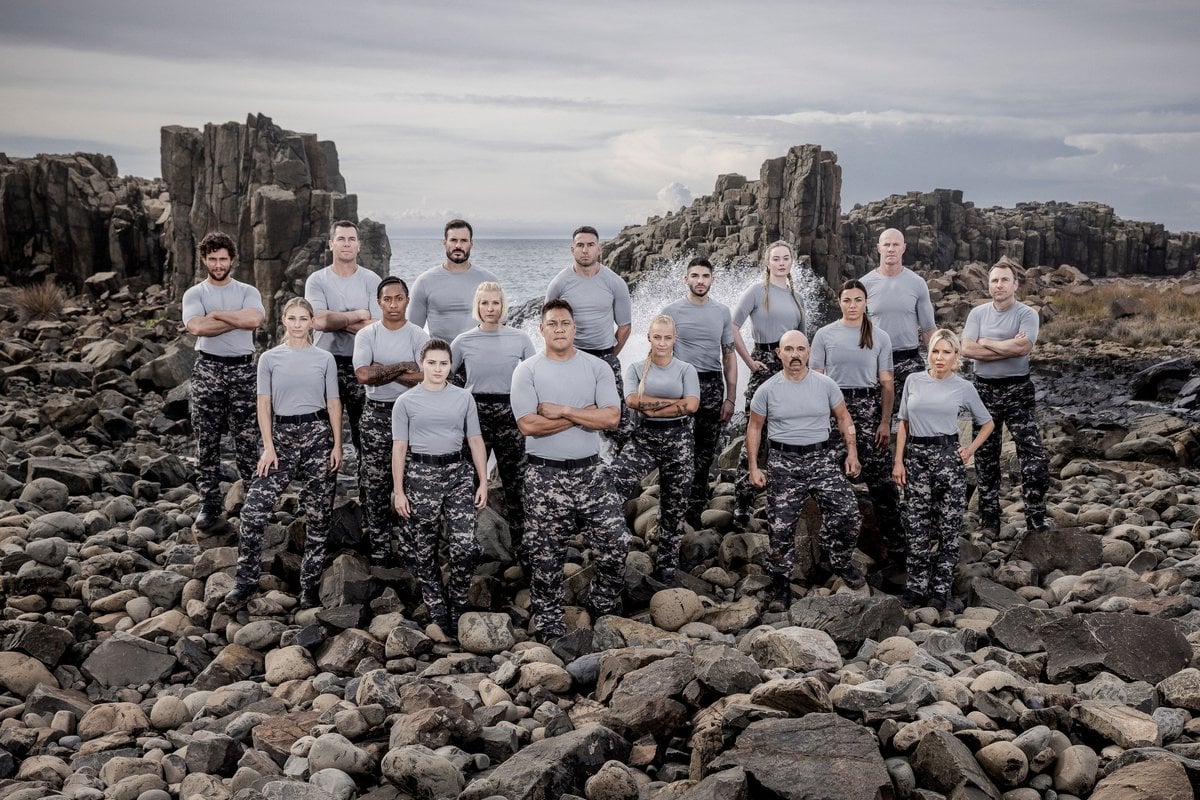 SAS Australia is returning to our TV screens on Monday, February 21.

This year, Channel 7 has recruited 17 celebrities who will be pushed to their absolute limit over 14 days in a series of psychological and physical challenges.

Watch the trailer for the latest season of SAS Australia. Post continues after video.

Video via SAS Australia on 7.

The recruits will eat, sleep and train together in notoriously cruel conditions.

And they will be bossed around by an elite special team of ex-special soldiers including Chief Instructor Ant Middleton, and his DS (Directing Staff) - Mark 'Billy' Billingham, Jason 'Foxy' Fox and Ollie Ollerton.

Here's what we know so far about this year's cast:

Anna made her mark on the inaugural season of The Bachelor back in 2013, and since then the lawyer-turned-entrepreneur has welcomed a daughter, Elle, with her husband Tim Robards.

When first approached for the course, Anna claims she said "absolutely not", but was ultimately won over after a few chats with her husband.

"Self-doubt has played too much of a role in my life and I’d had enough. I wanted to change my way of thinking. It was also to show my daughter how courageous and strong women can be when they put their minds to something."

Former Olympic swimmer Geoff Huegill tugged at Australia's heartstrings back in 2000, and over the years earned himself eight time world record title, an Olympic Silver and Bronze medal, and a whopping 14 National Titles.

But Huegill describes his experience on SAS Australia as "brutal."

"I’m naturally a swimmer, not a runner and there was so much running and time on your feet. The pace and the anticipation of not knowing what was to come was a real eye opener."

Will his stint on SAS Australia have him wondering whether it was all worth it? We can't wait to find out.

Ellia is a Rugby Sevens champion and one of the world's strongest, most cunning rugby players.

Their will to fight and their determination comes from their mother who died in 2018 from cancer.

"My mum had been sick quite a few times before this but she had overcome it every single time," Green told Yahoo Sports Australia earlier this year.

"It was like she was superwoman - she could fight anything and that's exactly what I had always thought."

The superstar sports person made an announcement back in September with their partner Nessa Roberts, that they were expecting a baby.

It's safe to say this 28-year-old actor will dive into unchartered territories on the upcoming Channel 7 program, with his latest stints being Home and Away from 2016 to 2019, and House Husbands back in 2014.

The Australian boxer who also doubles as a maths teacher, will undergo the gruelling process as a contender on SAS Australia.

However, this is not the first time Bridges has been pushed to her limits, revealing she suffered an intense hand injury during her boxing fight in England against Mailys Gangloff.

"The first few days were hard for me when I wasn’t doing the tasks perfectly. Having to deal with not being good at things, but having no escape from those emotions because I had no phone, boxing bag or other distractions," Ebanie said of her time on the show.

"I didn’t expect to get emotional at the start or that failing things would affect me as much as they did."

No longer behind the desk, the 57-year-old will well and truly be putting it all to the test.

Melissa first made her mark as 'Nikki Spencer' on the popular 90s Australian soap opera E Street, and now she will once again show just how strong she is on the 2022 season of SAS Australia.

"This experience taught me that I have a lot more resilience than I thought. I’ve never, ever been so vulnerable in front ofa camera despite having been in the entertainment industry since I was four years old," Melissa said.

Richard spent eight years and nine months in prison after he was found to have over seven kilograms of cocaine, worth $10.8 million, in is home.

He had an A-list clientele, which he infamously turned over to police in order for a reduced sentence.

During his stint in prison, he earned himself a degree in accounting and a Masters in Business Administration.

Melissa Wu is an Australian diver, Olympic silver medallist, and world championship medallist, making her a real contender to go all the way on SAS Australia.

"I had four weeks to prepare off the back of hotel quarantine following the Olympic Games. I maintained my usual diving training load of 10 sessions per week, but switched it out for SAS specific sessions and exercises," Wu said of preparing for the show.

"I am a lot tougher and more resilient than I ever thought! I learnt that not being in control is not always a bad thing."

The self-titled "pretty boy" will have a chance to fight on SAS Australia this year. The Australian boxer held the Commonwealth super-welterweight in 2018.

He called 'the thrill and adrenaline of being out of [his] comfort zone', "amazing."

Locky Gilbert appeared on Australian Survivor twice before his stint on The Bachelor, so to say he is equipped for a battle would be an understatement.

This year's lineup will have some comedic relief thankfully, with Paul Fenech joining the recruits.

The beloved Aussie larrikin has made a number of hit comedies, including Fat Pizza and Housos.

However, we are not too sure just how far his antics will get him with an elite special forces team.

Millie Boyle will be joining the recruits in the 2022 season of SAS Australia.

The Australian rugby league and rugby union footballer will prove to be a serious contender for the fourth season.

AFL great Barry Hall is best known for his time playing for the St Kilda Football Club and the Sydney Swans, and now he is a proud father of two with his wife Lauren Brant.

Despite his time away from the field, we are sure the beloved ex-sportsman will be able to prove he is more than capable to take on the other recruits in SAS Australia.

Describing his time on the course, Hall said: "You could not switch off for a second. You had to constantly think what may be coming next... it would really wear you down over time."

The motorsport reporter will be a recruit on the Channel 7 program. Crehan made a name for herself by presenting from the throngs of the pit before COVID-19 hit.

Now, she will face the ultimate challenge by being cut off from the outside world and pushing herself to the absolute limit.

A post shared by R I A N A (@rianacrehan)

Boyd played for the Brisbane Broncos from 2017 to 2019, before retiring and welcoming his third child with wife, Kayla.

Listen to The Spill, a daily entertainment podcast that covers the top pop culture stories of the day. Post continues after audio.

"I was worried about the tasks going in, not failing, overcoming fears. But it’s all the mental and emotional things that really challenged me," he said of his experience on the course.

Simone Holtznagel is a fashion model, who is best known for her appearance in Australia's Next Top Model.

SAS Australia is a majorly different route for Holtznagel, but it's a challenge she seems to be ready for.

SAS Australia premieres on Channel 7 at 7:30 pm on Monday, February 21.

This post was originally published on October 5, 2021 and has been updated with new information.