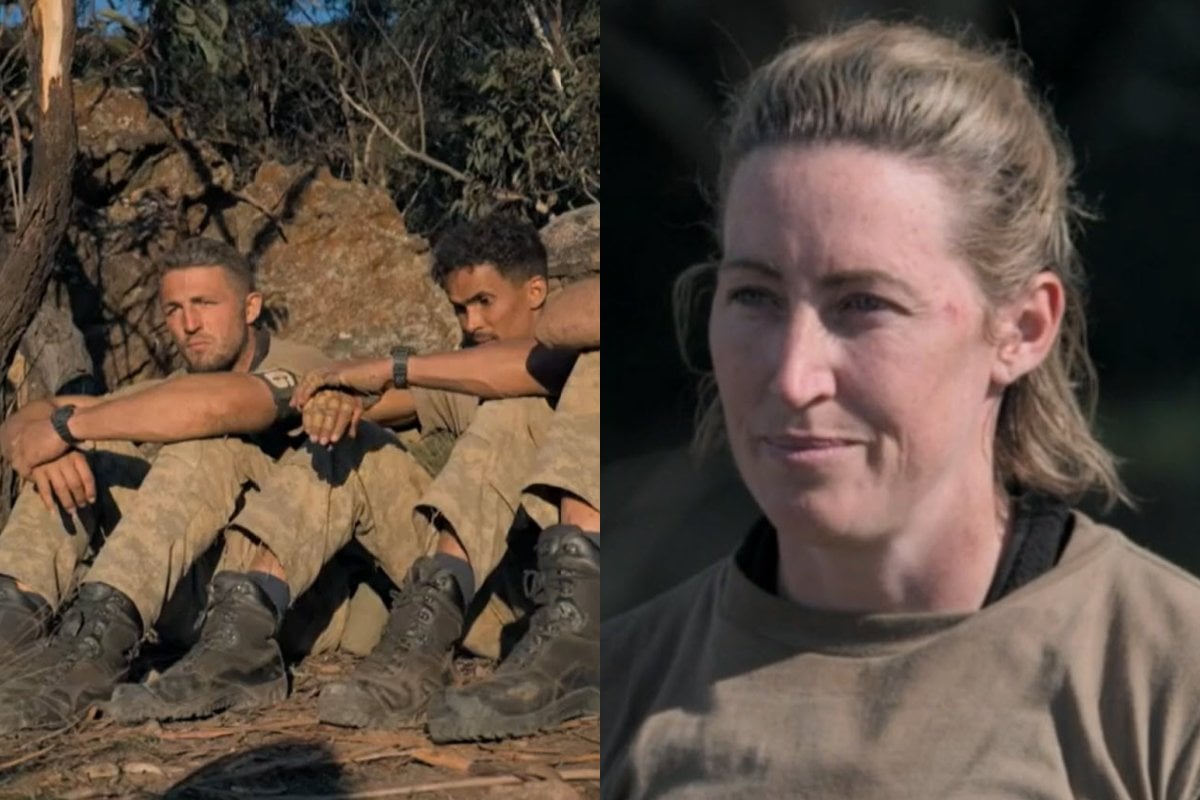 The five remaining recruits are in the car on the way back to base camp, having yarns and sharing backstories... but uh... WE KNOW WHAT HAPPENS NEXT.

Let's just get to the hostage situation, shall we?

They're put into a conga line and paraded through the bush. It's all very dramatic, until it... isn't. Turns out that no one is getting fake tortured/fake killed today.

The whole thing is actually just a test to find a 'thinking solider', the one who could take in as much detail about their captors as possible.

So they're taken back to base camp where they will be interrogated by the DS.

And at the end of it, one person will be culled.

THIS IS THE PART WHERE IT GETS REALLY CRUEL.

Someone really put themselves through two weeks of physical and mental agony to have their legs pulled out from under them right before the finish line.

Thanks, I hate it.

The recruits are held in that random shipping container from a few episodes ago, and Angry James Bond says if they try to escape, they will be shot dead.

Not ideal, considering they burned their death letters in the last ep.

Jana is first and she's unable to recall information like the hostile's insignia and walkie-talkie call sign, but the angry British men appear rather... reasonable right now, and think it's not a bad effort.

John also remembers only some of the details, but the reasonable British men are okay with it.

Mark can't really recall a lot, and is very nervous, but Sam is like... I know everything.

Angry James Bond says you'd look at Sam and think he's a brute with no brain, "but he's got a brain, ya know what I mean?"

Finally, it's Dan turn and he's... freaking out. 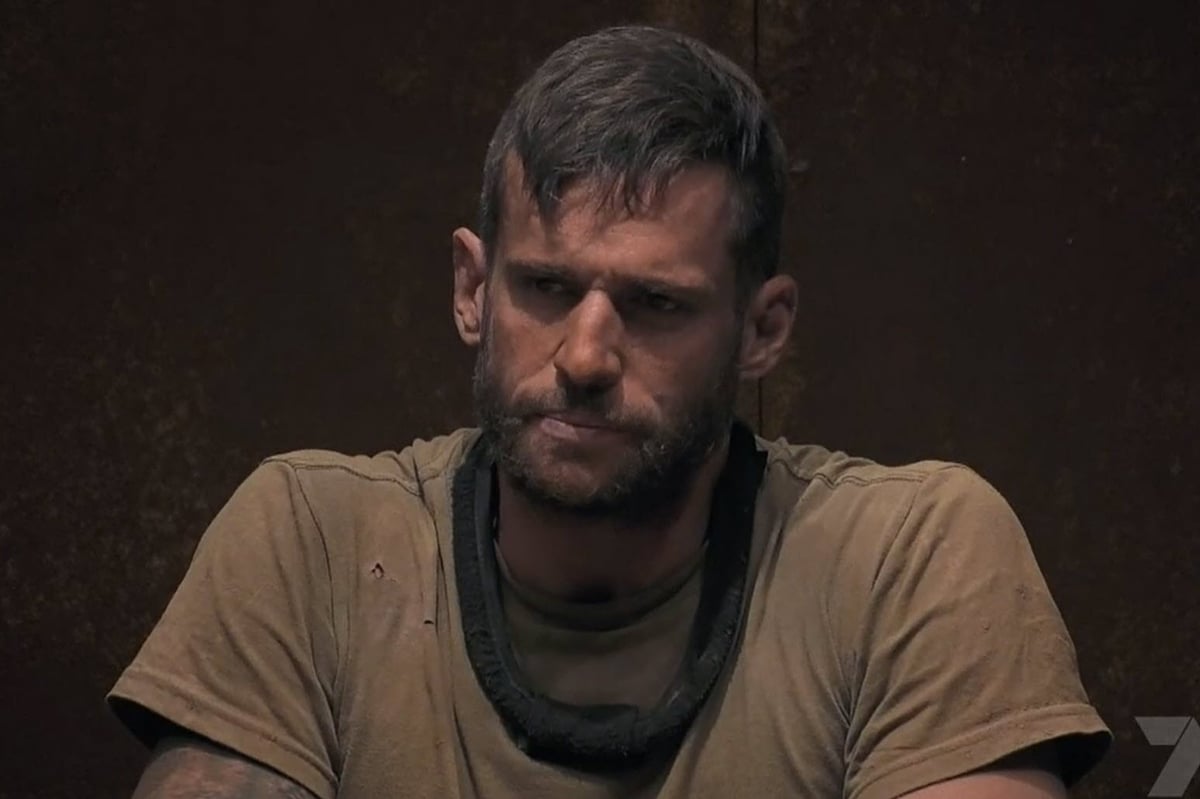 He says something about a fundraiser and how he's an actor and oh my god....... Does he think this is a bit?

OH LORDY THIS IS SO AWKWARD.

The reasonable British men are no longer reasonable, and he finally realises they want legitimate answers.

He can remember the female hostile and her call sign, as well as some details about the van.

On the way out, Dan and/or an angry British man walks him into the wall.

The British men are nice to him and he gets a trademark Angry James Bond hug for his troubles. 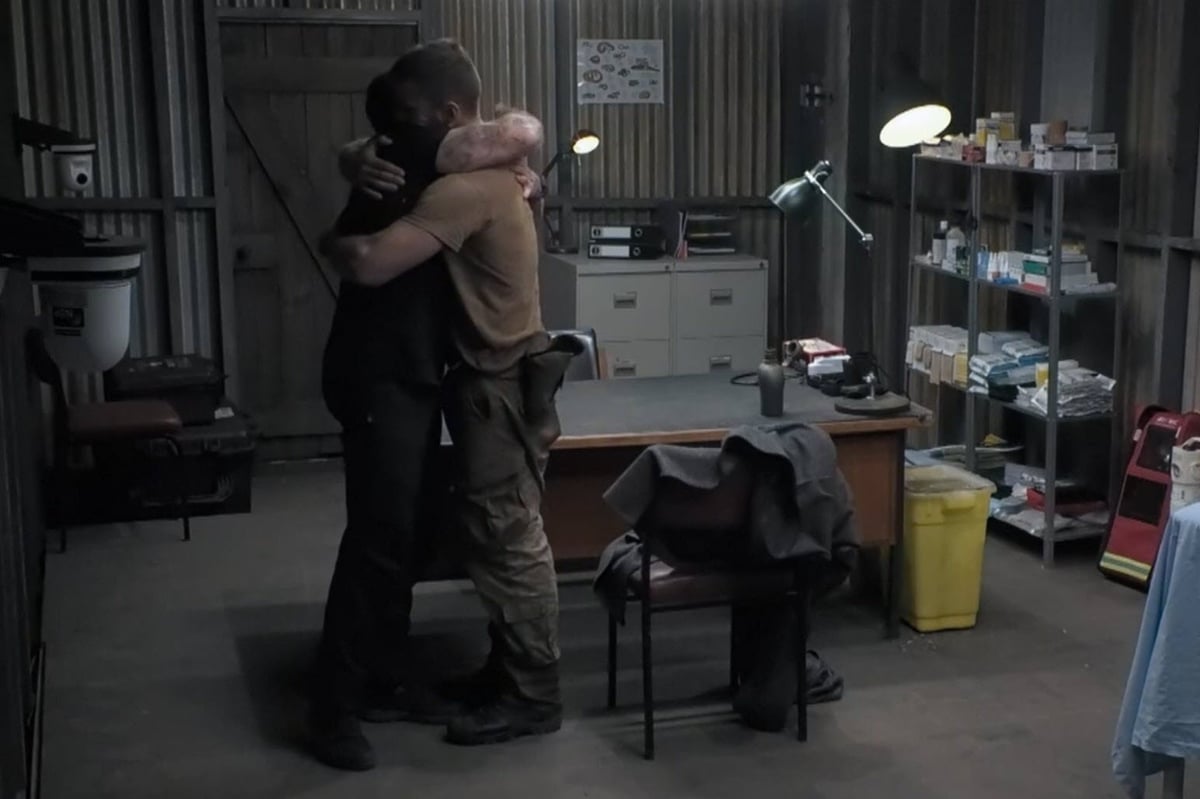 They talk about how he's learned to harness his ego and he dares Angry James Bond to step into his world. I for one would really enjoy seeing him on the beaches of Summer Bay, not gonna lie.

It's the final morning of the course, and Jana gives everyone a 'if I don't make it, it's been a pleasure' speech, to which Sam tells her he's not accepting it.

BECAUSE JANA IS A BOSS AND SHE'S GOING TO MAKE IT.

The recruits are given the opportunity to phone home... but it's not just a nice treat. It's a test to see where their emotional state is at.

Because of bloody course it is.

Jana, Mark and Sam all call home and have ~emotional~ virtual reunions. It's genuinely really lovely.

Then its John's turn, and his teeth are chattering A LOT. He then jumps up and moves away from the phone, choking up as he tells a confused British man he doesn't want to make a call.

OH. WHAT THE HECK. 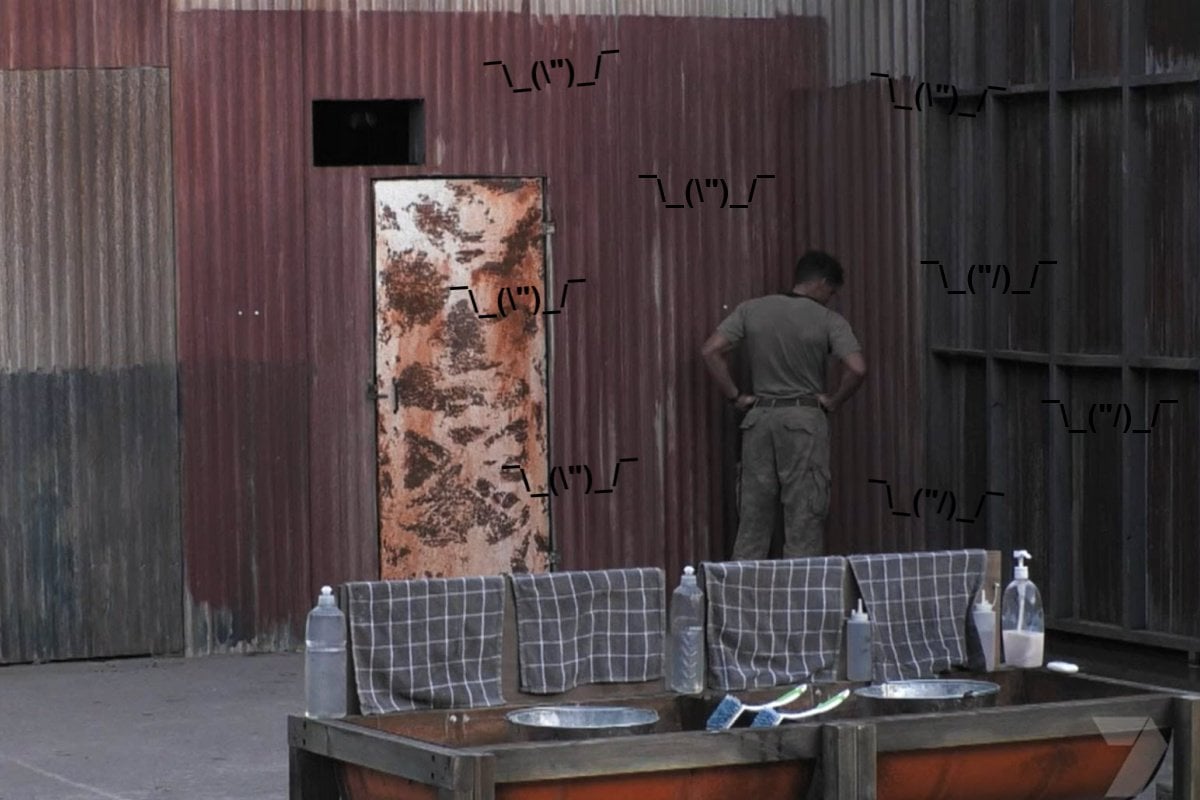 He says he doesn't do well with those emotions when he's trying to focus, so he composes himself and returns to the accommodation.

In the first of the final day's tasks, the celebs must work in pairs to search enemy territory for a cache containing important information about the enemy, and then make it to an extraction point to be airlifted to safety.

Sam and John locate the cache easily and make their way to the extraction point.

Jana enjoys ziplining out of the helicopter so much she does a little squeal, and I think the angry British men have just given up on policing excitement and celebration.

They find the cache but are running out of time to successfully complete the mission.

Jana is running on empty and implores Mark to go on without her, but one of the angry British men is like "you came in together, you fake die in this simulated warzone together!"

Sam and John are closer to the end when there are explosions and gas. They have to scramble on a gas mask, before climbing up stairs to the extraction point.

They make it and are airlifted out, and honestly this looks so fun: 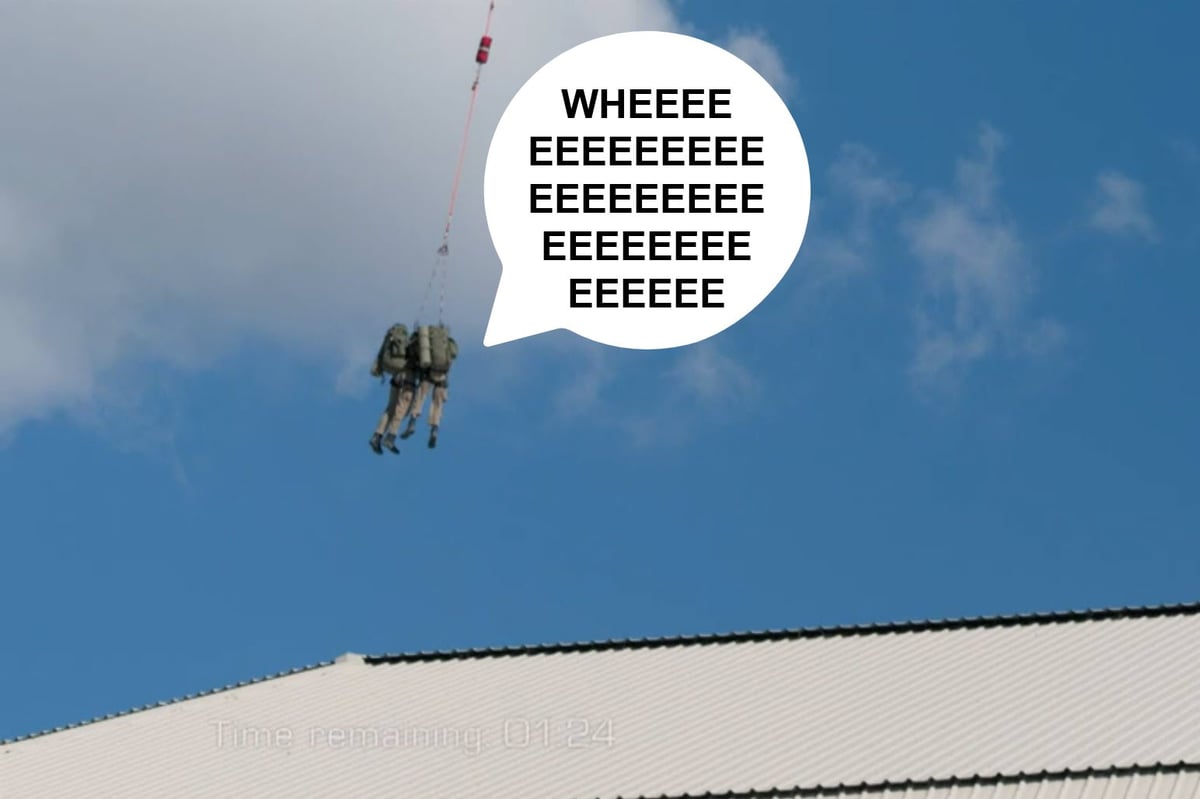 Jana and Mark make it to the helicopter with only seconds to spare, and everyone is now flying through the air by a rope.

John has passed out in the air and slumps into the grass when they touch the ground. 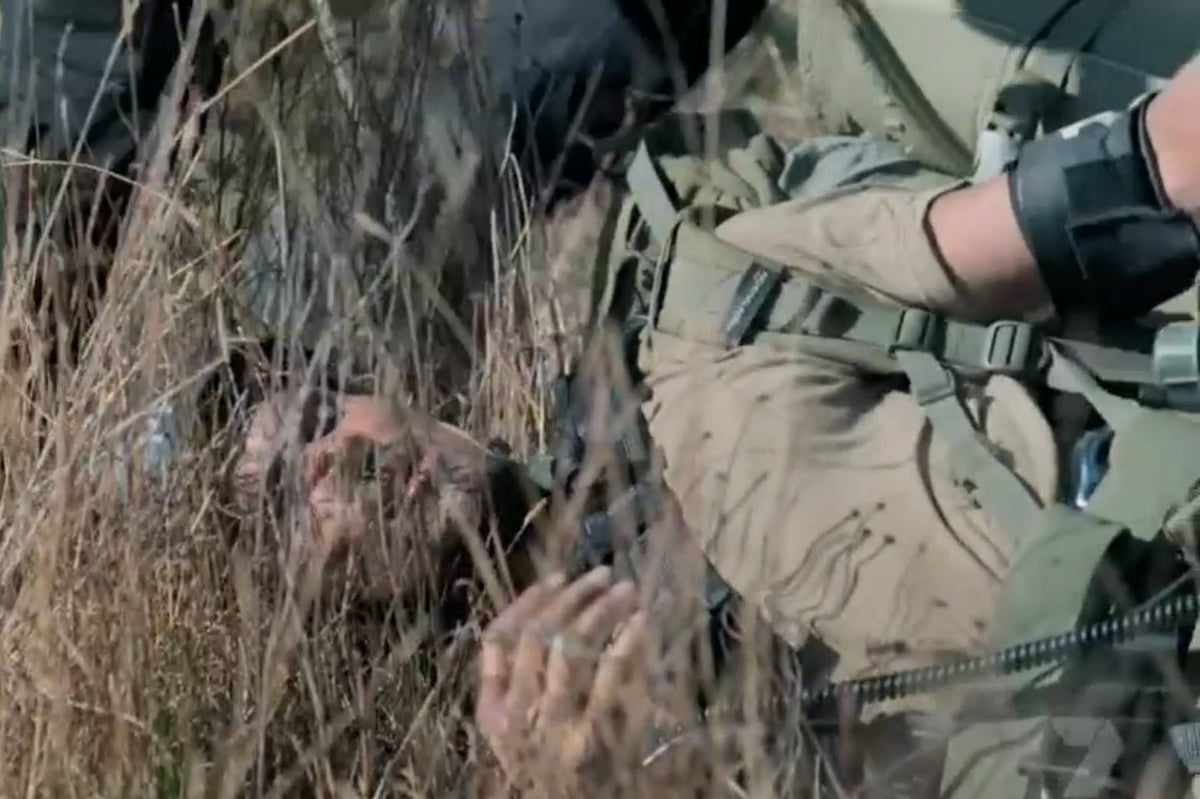 Thankfully, he comes around pretty quickly but JESUS. THAT'S SCARY AS HELL.

Also, imagine being Sam. You're flying through the air with a mate and suddently that mate just... passes out.

Jana and Mark, but not Mark's balls, make a safe landing nearby.

Despite all passing the task, another recruit is about to be culled.

Sam and John go forward, and THEN THERE IS A WHOLE DAMN AD BREAK TO FIND OUT WHAT'S HAPPENING TO MARK AND JANA.

I understand a good cliffhanger but THIS IS CRUEL.

Angry James Bond says she simply has nothing left in her reserves, but they're all proud of her. She then receives a procession of angry British hugs.

YOU WERE SO GREAT.

I'm emotionally scarred, but we have to move on because there are three blokes remaining and there is just one task standing between them and the end.

They're going to have to crawl along a rope suspended 300 metres over a deep gorge, then hang on for dear life right in the middle of it for 90 seconds.

John goes first and THIS IS SO SUSPENSEFUL.

THE MUSIC. THE CAMERA SHOTS. I'M LIVING FOR THIS. 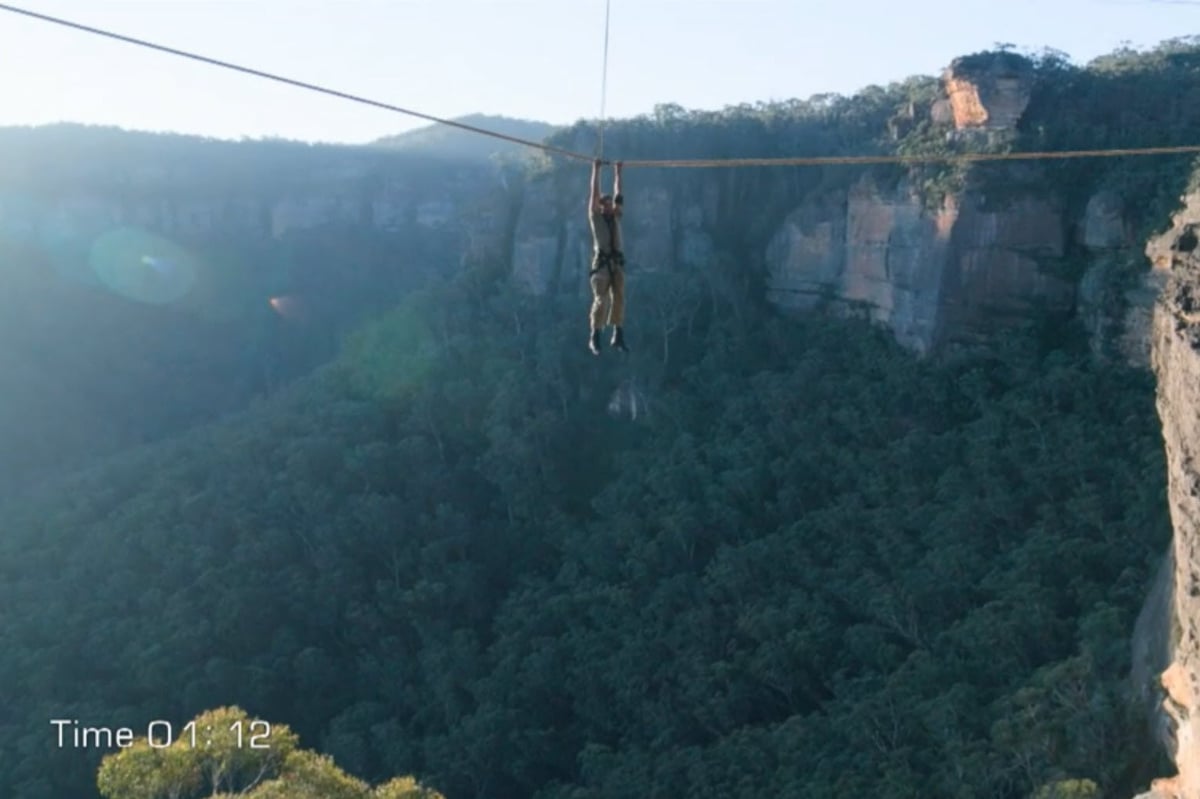 He seems calm, only really showing pain or emotion in the final 20 seconds.

The seconds tick down and finally, hit zero.

Sam is next and his shoulder is cooked. Not the greatest start to a challenge where shoulders play rather an important role.

He's in so much pain from the very beginning and oh my god, this is tough to watch.

The grimace is freaking me outttttttttt. 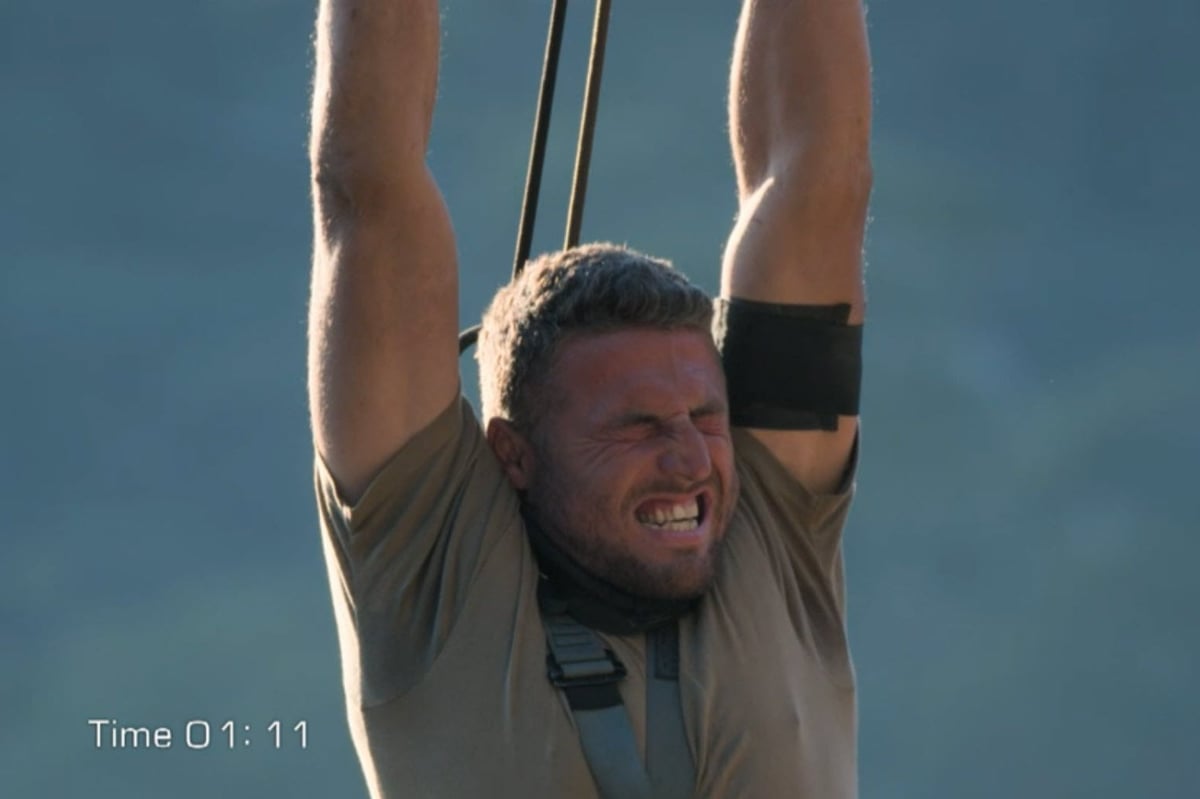 There's more cinematic camera work and lots of dramatic drum sounds, until Sam makes it through the painful 90 seconds successfully.

Last up is Mark.

He is clearly in deep, deep pain with 30 seconds to go but he holds on and also passes the task.

All three of them are now in the running to pass selection.

The angry British men consult one another about who they'd be happy to have alongside them on a non-fake battle field.

They're talking through Mark, Sam and John's strengths and weaknesses... and idk... to me it feels a bit obvious.

THIS IS THE MOMENT OF TRUTH.

Angry James Bond tells Mark and then John to take a step back, and declares that Sam is the one who has passed.

Precisely nobody is surprised.

But I am surprised by the slow motion, hazy montage on hugs and smiles that follows.

Sam says he's proud and this was always the goal, and that the course has been a good lesson in life.

"What I'm taking from it is I'm going to pour all my time and my emotion into the places that deserve it in my life," he says.

"It starts with my kids and just making sure I'm the best role-model for them." 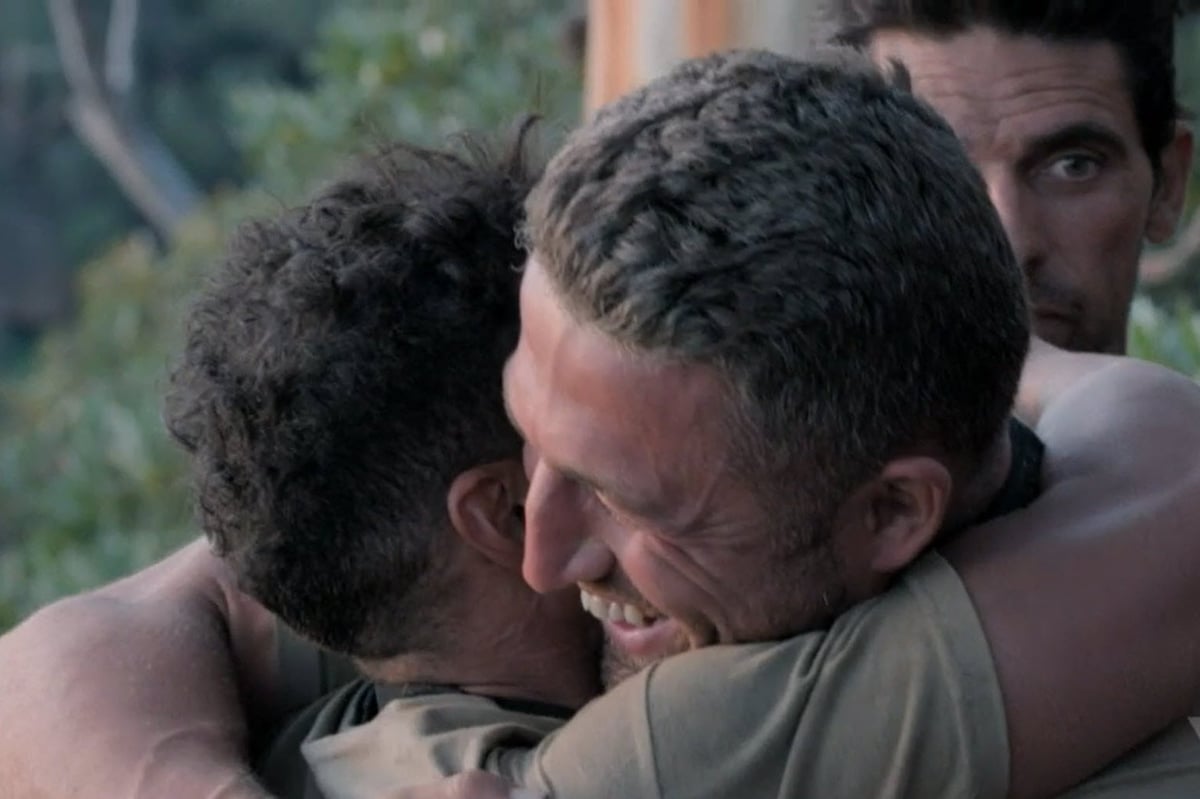 And boom, it's over.

What a slog. If you've stuck with me throughout all of this, I hereby declare that YOU HAVE PASSED.

I'M NOT CULLING ANYONE.

I'll happily have you all on my team, as we sit on our arses and judge people on reality TV together.