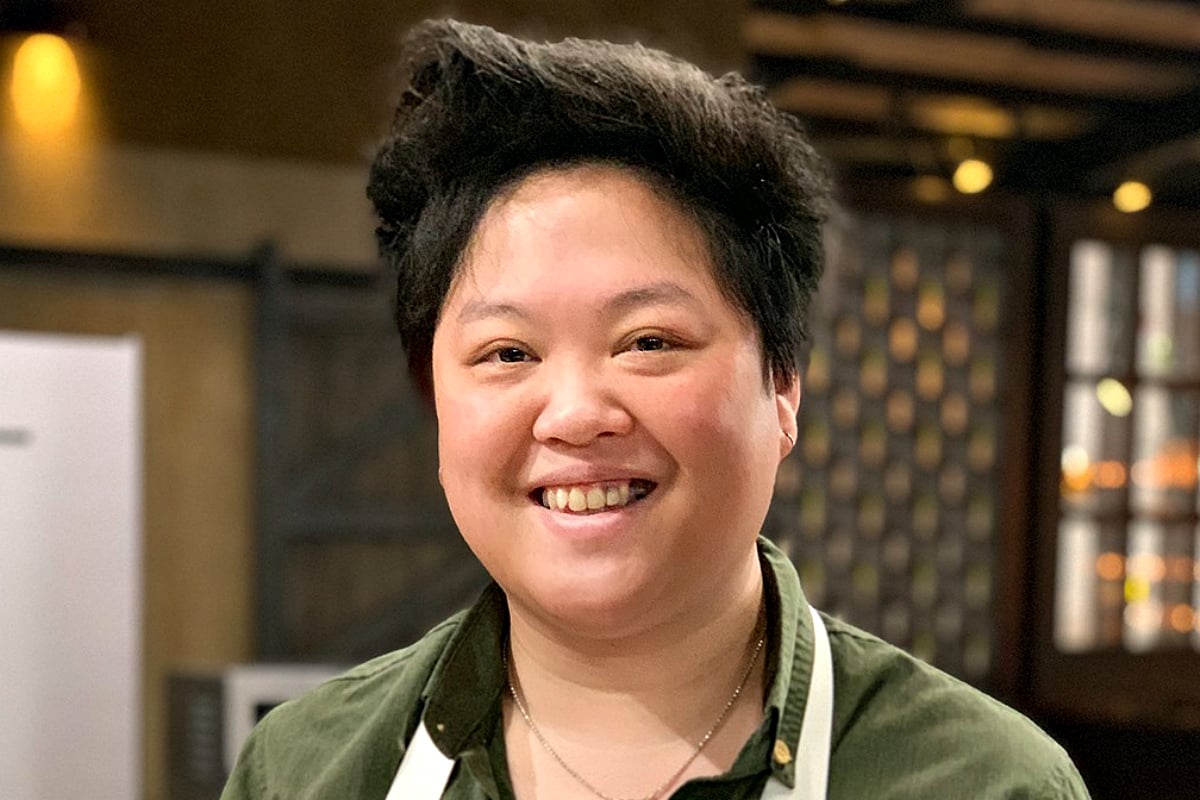 Growing up, Sarah Tiong didn't see herself in the media. There were barely any Asian women looking out at her from magazines or television shows or movies, and even fewer with ambitions like hers.

This year, the lawyer/chef has played a role in changing that for the next generation.

By returning to MasterChef 2020, following a successful stint in season nine, Sarah has been part of a pivotal moment in local TV history.

Watch: Sarah's message after her elimination from MasterChef 2020.

The 'Back to Win' series, which is the first under new judging lineup of Melissa Leong, Jock Zonfrillo and Andy Allen, has been widely celebrated for its representation of Asian Australians. From its more diverse casting to its celebration of migrant stories and normalisation of Asian ingredients (think chicken feet and durian) that would have once been deemed too "exotic" for a mass audience.

"It was a moment that was really quite inspiring for a lot of us. And to have Melissa Leong represent Asian Australian women in such a position of power — that is an incredible achievement!"

A few of my loves 🥰❤️ 📸 at the @masterchefau Season 12 Back to Win launch party the other night! The friendships and level of respect and connection formed through this experience is tremendous. Boy am I lucky. — — #good #food #foods #foodie #foodies #friends #chef #cook #masterchefau #masterchef #tv #women #womeninbusiness #womensupportingwomen #grateful

Sarah was born into an immigrant family.

Her mother, Christine, is from a small village in East Malaysia but came to Australia in her late teens.

It's through her Sarah developed a love of cooking.

Some of her happiest childhood memories are from around her family dinner table — "the one place where hurt was healed, joy was celebrated and troubles were solved" — watching her mother ladle steaming pork-bone soup into a bowl, sitting down to eat with her family.

Sarah started cooking herself around the age of 15, but it didn't seem like a viable career.

She undertook actuarial studies and law at university, and entered the corporate world as a risk analyst.

"That goes to the Asian perspective," she said. "I was told, growing up, that your career option would be either a doctor lawyer or engineer. And yes, I fulfilled one of those. But, times, they are a-changin'. It's like, actually, there are other ways to be successful and there are other ways of having a very fulfilling life. So I am incredibly grateful to have an open family that embraces that as well."

"I made a decision to sacrifice that much salary to follow my passion."

Despite being up for a promotion at the time, Sarah took a major risk and applied for the 2017 season of MasterChef "on a whim". She ultimately placed sixth.

Being immersed in that "bubble" of positivity, creativity and like-minded, passionate people pulled her back for this year's Back to Win season, where she made it to the top 10 before being eliminated in Tuesday night's pressure test.

Her corporate job is now only part-time, and the rest is dedicated to food: she's worked as a private chef, recipe developer, runs a pop-up food stall called Pork Party and is about to launch her cookbook, Sweet. Savoury. Spicy.

"On my off days, I think back and go, 'Wow, I made a decision to sacrifice that much salary just to follow my passion for cooking something in a wok," she laughed.

"While that's daunting, while that sometimes scares me, it also gives me perspective to say, 'Something made you make that choice. You obviously have a burning passion that can't be ignored, so go forth; go forth and conquer, woman!'"

To women who feel that fire, she offers this advice: "Think about what is most important to your life. Can you go on making the secure choice, making the safe choice, and still be happy? What does happiness actually mean and how do you define that for yourself? If you can come to a decision about what that is, the choice will be clear.

"At the end of the day, both choices won't be easy. Nothing will ever be easy. You've got to work for it."

That passion, optimism and burst-at-the-seams enthusiasm is a huge part of Sarah's popularity among the MasterChef audience.

Her elimination this week, which came courtesy of a burned batch of jungle curry paste, was met with a cascade of tributes (and a little bit of fury) on social media.

Noooo. Sarah Tiong going home. That’s just too sad. Such a wonderful cook and so genuine, positive and passionate to watch #MasterChefAU

devastated by national treasure Sarah Tiong’s departure tonight. We were so lucky to know her 😭#MasterChefAU

"Honestly, it's so overwhelming, in the most positive way," said Sarah. "It's so, so lovely, and I'm so grateful that people felt like they really were able to connect with me and that they enjoyed seeing the vibe that I gave — all the energy, the positivity — and I think that's really important, especially in a time like this. I'm really proud of how I came across and I'm really grateful for that."

Her presence on the show and the choices she made meant many people were finally seeing themselves looking at back at them from the television.

"I've received countless messages from people saying, 'Thank you for not shying away from cooking something that might be ugly delicious or something that might seem so weird to people. And thank you for being, visually, a representation of who I am.' That to me, that's such an important role to play. I am ready to step up and continue that role," Sarah said.

"I hope that, in my future, I am able to reach out to communities and to represent a part of these different communities that actually need that representation."

Who Sarah thinks will win Masterchef Australia: Back to Win...

"Knowing who the top nine is, whoever is in the grand finale it's going to be one of the most heated, epic, neck-and-neck battles. So far, I've got to say, Poh and Callum — keep an eye out for them, because those guys are scary talented cooks."

MasterChef Australia: Back to Win airs Sunday to Thursday at 7.30pm on Channel Ten.