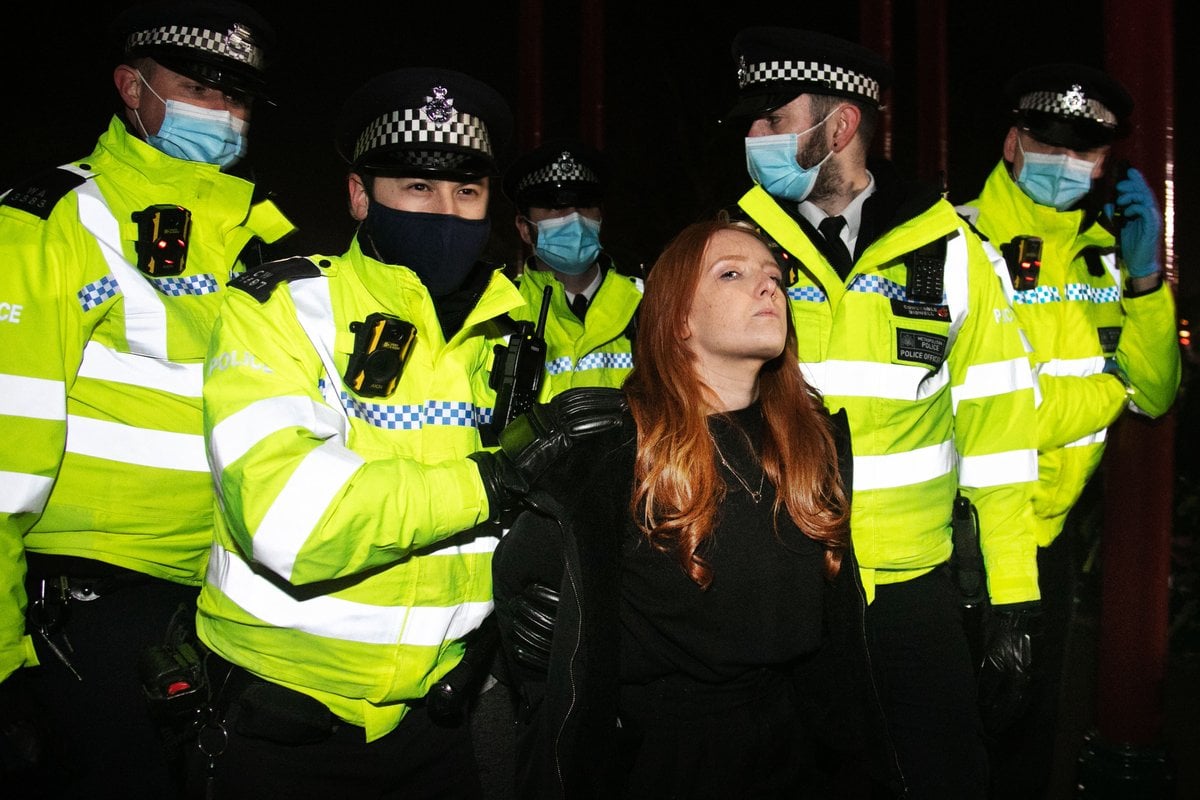 On Saturday night thousands of women followed the exact route that Sarah Everard walked on the night she was murdered.

Ending in Clapham Common, hundreds left flowers and lit candles in honour of the woman that could have been any one of them. A woman who did all the 'right' things to protect herself from rape and murder. A woman who wore trainers and bright clothes, a woman who called her boyfriend on her walk home, a woman who chose a well-lit route, a woman who was attacked unprovoked and murdered, allegedly by a police officer.

Despite rage no doubt running through the veins of every woman there, the protest was peaceful.

That was until police were seen surrounding the crowds, grabbing and arresting attendees.

The defence from police, and London's Metropolitan Police Commissioner Cressida Dick, was that the event had been banned prior to it taking place, and that force was needed due to the “very real risk of easily transmitting COVID-19”.

It was this action that transformed the protest from calm to chaos.

Panic ensued and at the centre of the mayhem was Patsy Stevenson.

Officers formed a chain and moved in on the crowd, with the bandstand where individuals were speaking being the main focus. They flooded the space and threatened the women within it to leave or be arrested.

Patsy didn't move fast enough. And then this happened.

The Met has allowed what would have been majority-peaceful demonstration turn into an angry protest.

Instead of seeking to repair broken trust with women it has further destroyed it.

Patsy was pinned to the ground with "several police on my back trying to arrest me" despite her claiming she really wasn't doing anything.

"I’m 5ft 2in and I weigh nothing," she later told Counterfire. Begging the question, why was this level of action taken?

There are such "burn the witch" vibes from this photograph. An age-old story of men's power and men's fear. It's bleak as hell, but at the same time: hold on to that look of defiance. pic.twitter.com/SkpwK5d1MD

She was then loaded into a police van and her details taken by officers at the scene. Instead of being taken to the police station, she was simply handed £200 and told she could go home.

Patsy spoke to ITV’s Good Morning Britain about the vigil and the force used against her at the protest.

“To be honest, I still don’t know why I was pushed to the ground so forcefully. I’m quite small and it was two very large male officers who sort of pulled me back very quickly as I hit the ground.

“From start to finish, it was just a sort of whirlwind, it happened very quickly and I was only there to lay a candle down. I did not expect that to happen.”

When asked how she felt in that very moment, she candidly stated: "I have never been so scared."

Listen to Mamamia's daily news podcast, where host Claire Murphy talks about what hundreds of thousands of women are marching across Australia. Post continues after podcast.

The irony of being handled by the police while at a vigil for a women murdered allegedly at the hands of a police officer is not lost on Patsy.

Instead, she pointed to “how strange” it was that women “don’t have the freedom” to walk the streets without fear of attack.

And as for whether this situation has deterred her from protesting women's safety again, she proudly indicated that she'll be back for the next protest no matter what.

“Women have stood by and let things happen for long enough."