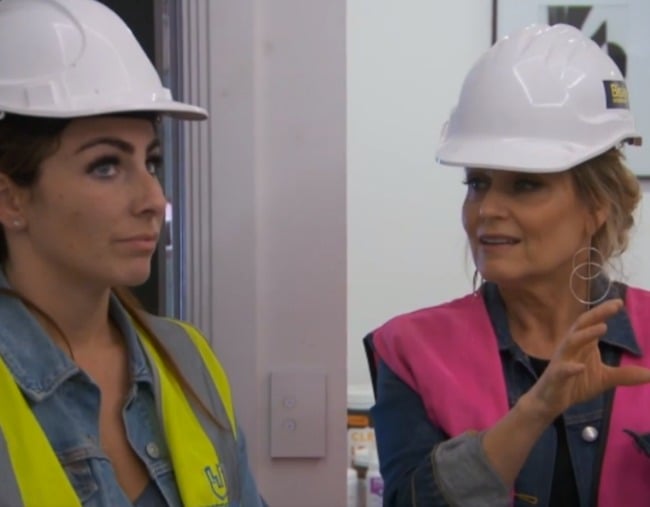 You see, Sara, a flight attendant, and her partner Hayden, a construction manager, have received the lowest score on The Block three weeks in a row.

Despite this, the couple believe they know best when it comes to the design of their apartment ¯\_(ツ)_/¯ .

The judges very much disagree.

After viewing the couple’s master ensuite on Sunday night’s episode, judge Shaynna Blaze offered to give Sara and Hayden some one-on-one advice.

Sara wasn’t happy about it.

On Tuesday night’s episode, Shaynna came through with the goods.

She walked Sara, later joined by Hayden, through the apartment room-by-room and told her exactly where they went wrong.

In the bathroom Shaynna said the modern and traditional features was “mixing in a very strange way”.

"There's a lot going on," she explained to a furious looking Sara. "Those tiles are amazing but having them on the floor as well makes it look really busy."

Shaynna then said their guest bedroom felt like a "very basic display room".

"You shouldn't have a bedhead that has all that texture in front of a wall like that," she explained to Sara who... wasn't really listening.

Moving into the main bathroom, Shaynna explained that it didn't really fit in with the rest of the apartment.

Hayden then thought this would be a good time for him to question Shaynna's advice.

"But I guess it's all open for, you know, interpretation," he said.

Shaynna asked the couple to tell her what they did for a living and then she dropped this clanger...

Later Shaynna told the camera she believed Sara and Hayden didn't really take in her advice.

"I actually don't know if they really listened 100 per cent," she said. "They think they've got the direction absolutely perfect and it's everything else that's going wrong."

Sara woke with dread while every other contestant would have woken with excitement to get a 1:1 with Shaynna or Sheena as Sara likes to call her. #9TheBlock

Did Sara seriously make that face the whole way through her special consultation with Shayna? How rude. #9TheBlock

Fuck Sara rolling her eyes the WHOLE time Shaynna was helping her. Disrespectful little jerk ???? Everyone else would’ve loved this opportunity! #9TheBlock

High hopes? No you’ve been cocky and arrogant. Try being humble and learning from past mistakes #9TheBlock

Tune in tomorrow night for the next exciting installment of "Sara chucks a tanty" and everyone else is really nice and does some decorating and what not ¯\_(ツ)_/¯.

It was obvious that it was going to be a waste of shaynna’s time. Sara doesn’t see anything wrong with anything she’s done, she just lives in a land where she always gets her way and everyone compliments her. The block isn’t part of this land

As the tweet said, anyone else would be desperate for a bit of insight from one of the judges, what a wasted opportunity.

I think the drama in this show is scripted and I really wish it wasn’t. I miss when the block was all about the reno.

It's gone the way of my kitchen rules by the sounds of that. Of course irmts scripted and when the cameras stop tradies come in and fix most of it