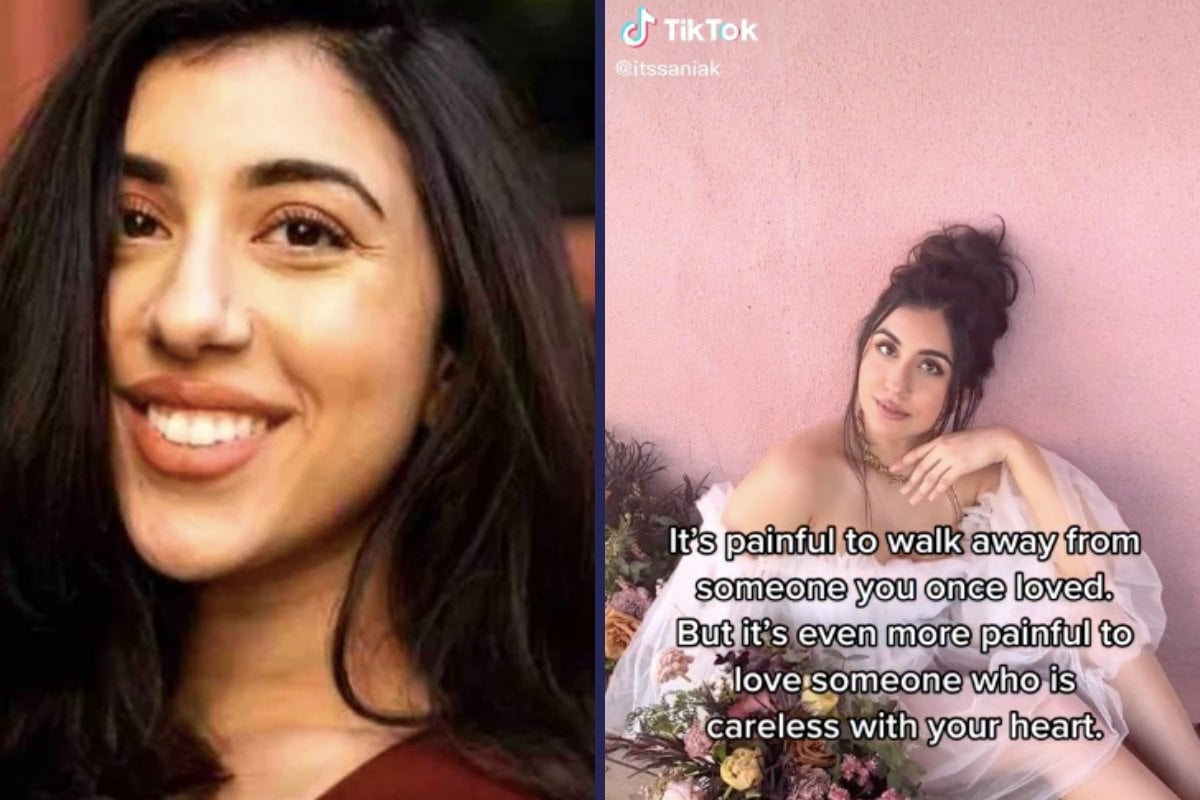 Content warning: This story includes descriptions of domestic violence and murder that may be distressing to some readers.

When 29-year-old Chicago photographer Sania Khan got divorced earlier this year, she decided to share her experiences with other women on TikTok.

"Finally had your dream Southasian wedding but end up marrying just another toxic Southasian man," she wrote in a TikTok she posted in late May.

Watch: The most dangerous place for a woman to be on Saturday night? At home. Story continues below.

"To my Southasian queens, a reminder that you don’t have to settle in marriage or love," she wrote a day later. "Is that man TRULY deserving of you or does he just look good on paper?"

"Sitting in a coffee shop getting lectured by family members after my TikTok went viral," she added the next day.

Khan was the daughter of Pakistani immigrants. She worked as a flight attendant and then a photographer, taking beautiful photos of happy couples at weddings.

"I put my heart and soul into every picture I capture," she wrote on her website.

Last year she married Raheel Ahmad and moved from her hometown of Chattanooga, Tennessee, to Chicago. But very soon, she wanted out of her marriage.

"He monitored what she wore," one of her closest friends Gabriella Bordó told Time. "He was wary about who she hung out with, how she presented herself."

According to Bordó, Khan's family and her husband's family encouraged her – even pleaded with her – to stay.

"Going through a divorce as a South Asian woman feels like you failed at life sometimes," Khan wrote in another TikTok. "The way the community labels you, the lack of emotional support you receive and the pressure to stay with someone because 'what will people say' is isolating. It makes it harder for women to leave marriages that they shouldn’t have been in to begin with."

Single again, after less than a year of marriage, Khan started living life the way she wanted. One TikTok shows her proudly displaying her first tattoo. Another has a photo of her dressed in a loose, long-sleeved shirt (“His wife”) followed by a photo of her in a tight black top ("His ex").

"And I've never been happier," she added.

Khan had plans. She was going to move back to Chattanooga and share a house with her friend Bordó. Last Monday, Bordó flew to Chicago to help Khan pack, and caught the subway to her apartment. But Bordó would never see her friend alive again. Khan's ex, Raheel Ahmad, got to the apartment first.

Listen: The Quicky speaks to two domestic violence experts, and a survivor about why the true cost of this case is going to be about a lot more than $15 million dollars. Story continues below.

Ahmad had left his home in Atlanta, Georgia, and driven 11 hours to Chicago. A relative contacted Atlanta police to report Ahmad missing, and Chicago police went to Khan’s apartment. They knocked on the door and then, according to the Chicago Sun Times, they heard a single gunshot and "a verbal groan". When they got inside, they found Khan already dead and Ahmad close to death. Ahmad died in hospital.

The Sun Times quotes police as saying that Ahmad was "going through a divorce", was "depressed" and went to Chicago to "salvage the marriage". But friends say the divorce was finalised in May.

Bordó told Time that Ahmad was not trying to salvage the marriage.

"He went there with a gun for a reason," she said. "He knew I was coming. My social media and hers is completely public. It was his last opportunity, and he took it."

In Chattanooga, friends of Khan's held a candlelight vigil.

"Her light is never going to go out," friend Kierstyn Parker told WDEF. "With her photography, she has impacted so many people, and, long after we're gone, her photographs and her art are going to remain."