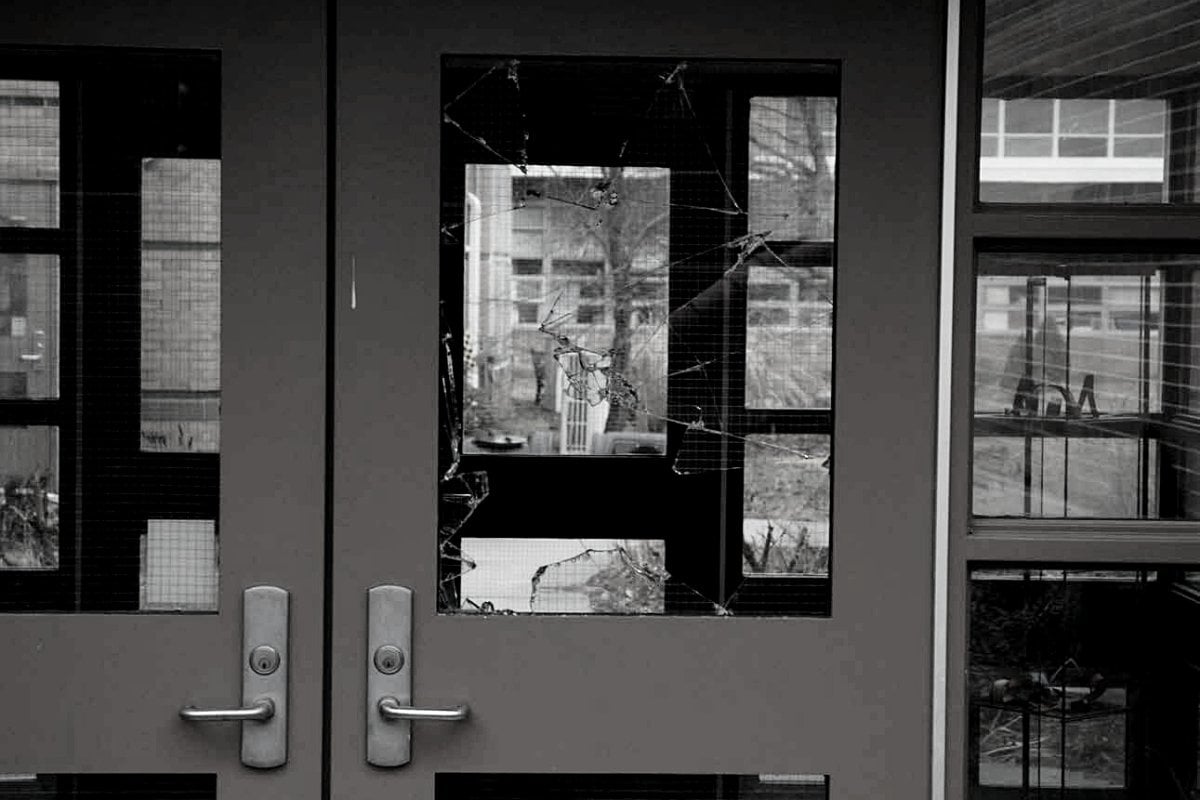 Ashley was excited about going to school on December 14, 2012. She'd picked out her own outfit for the day, which, as a seven-year-old, felt like a pretty "big deal".

But as her class gathered for their morning greetings, a sound rang over the intercom at Sandy Hook Elementary School in Newtown, Connecticut.

In an interview with NowThis coordinated by the advocacy group Guns Down America, the now-teenager spoke about her memories of what became the deadliest school shooting in US history.

Memories of running to shelter in the classroom's cloak cubbies.

Of the crackling sound coming through the school intercom, which had been left on after school-wide announcements were interrupted by the attack.

Of her 18 classmates trying to stifle their sobs.

Of her teacher, Abbey Clements, pulling two unsuspecting students in from the hallway to hide them with her class.

Of Mrs Clements' hands shaking as she read a book to keep the pupils calm.

As Clements wrote for Marie Claire back in 2013, within a matter of a few minutes, the sound of police sirens surrounded the school. "The good guys are coming!" she told the children.

My sweet, brave Ashley, your voice is so powerful! Proud and honored to be connected to you, Love, always. ❤️ #GVSurvivorsWeek #EndGunViolence https://t.co/U4qKq6YPvE

The 20-year-old gunman took 27 lives that day, including his own. Twenty of the victims were children, aged six and seven.

Ashley's class was among those unharmed.

"I was lucky," Clements wrote. "The gunman turned left instead of right, where my classroom was."

Speaking to NowThis, Ashley recalled that when police officers arrived to lead them from the building, she and her classmates were told to line up, put their hands on the shoulders of the person in front, and close their eyes tight.

"A few of my friends didn't close their eyes," Ashley said, "and they're still so scarred because they saw their classmates [that had been shot], I guess."

Once outside, she searched desperately for her little sister, appealing tearfully to police officers to find her. She described the moment they were reunited and held each other as the most relieved she's ever felt in her life.

Eight years on, little headway has been made on gun reform in the United States.

In fact, more than two million guns were sold in the country in January 2021 alone — the second-highest monthly total in US history.

Those numbers are believed to have been driven by fears of violence following the siege at the United States Capitol building on January 6. And also likely by the fact that newly inaugurated President Joe Biden campaigned on tightening gun control, including a ban on the sale of assault weapons and expansion of criteria for background checks.

Similar legislation was introduced after the Sandy Hook massacre but was defeated in the Senate. 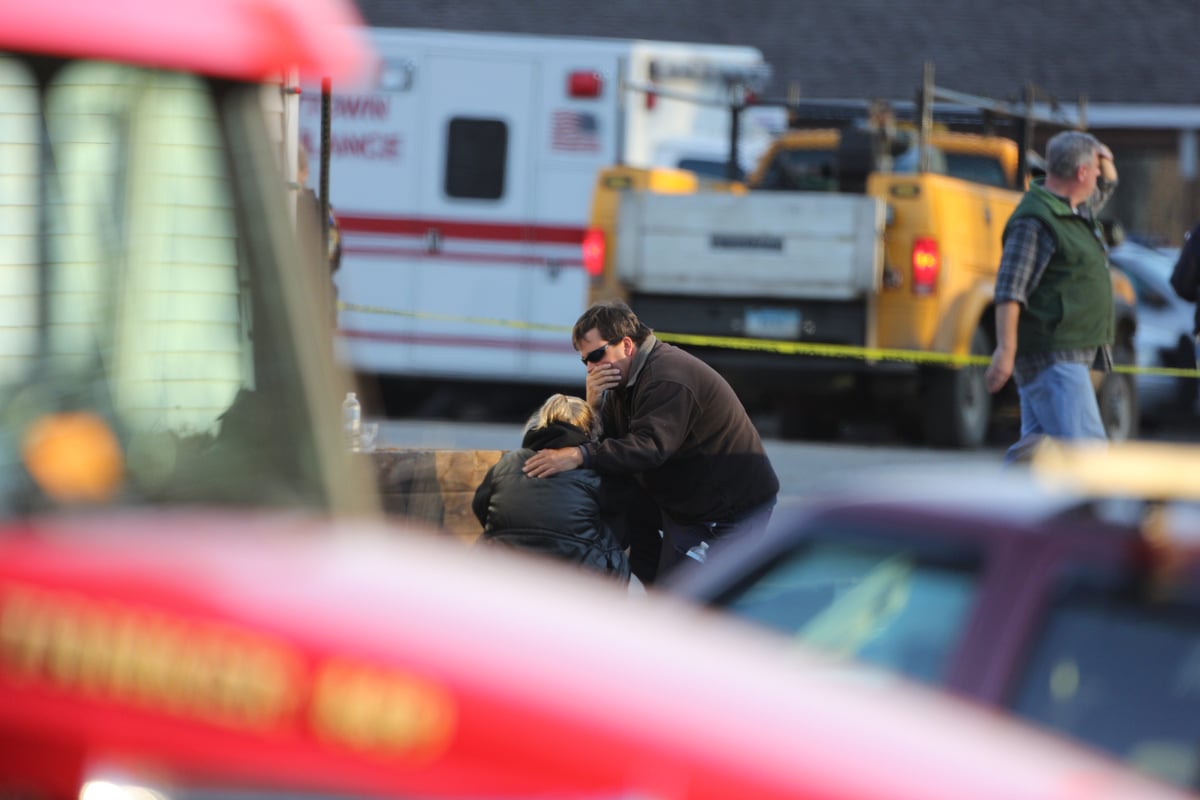 For some, the Sandy Hook shooting became political. For dozens of families, it was deeply personal. Image: Getty.

Some gun-loving Americans cling so tightly to their Second Amendment "right to bear arms", that a small, extremist contingent has even spouted cruel conspiracy theories online that massacres like Sandy Hook and the 2018 Marjory Stoneman Douglas High School shooting in Parkland, Florida, were hoaxes orchestrated by the government to gain public support for gun control.

One of those people is in Congress.

On Friday, Republican representative Marjorie Taylor Greene was stripped of her place on two committees over incendiary posts made prior to her election, including apparent support for claims that the school shootings at Sandy Hook and Parkland were staged.

For survivors like Ashley, these lies only compound the trauma.

"I can’t even express how angry, how emotional that makes me." 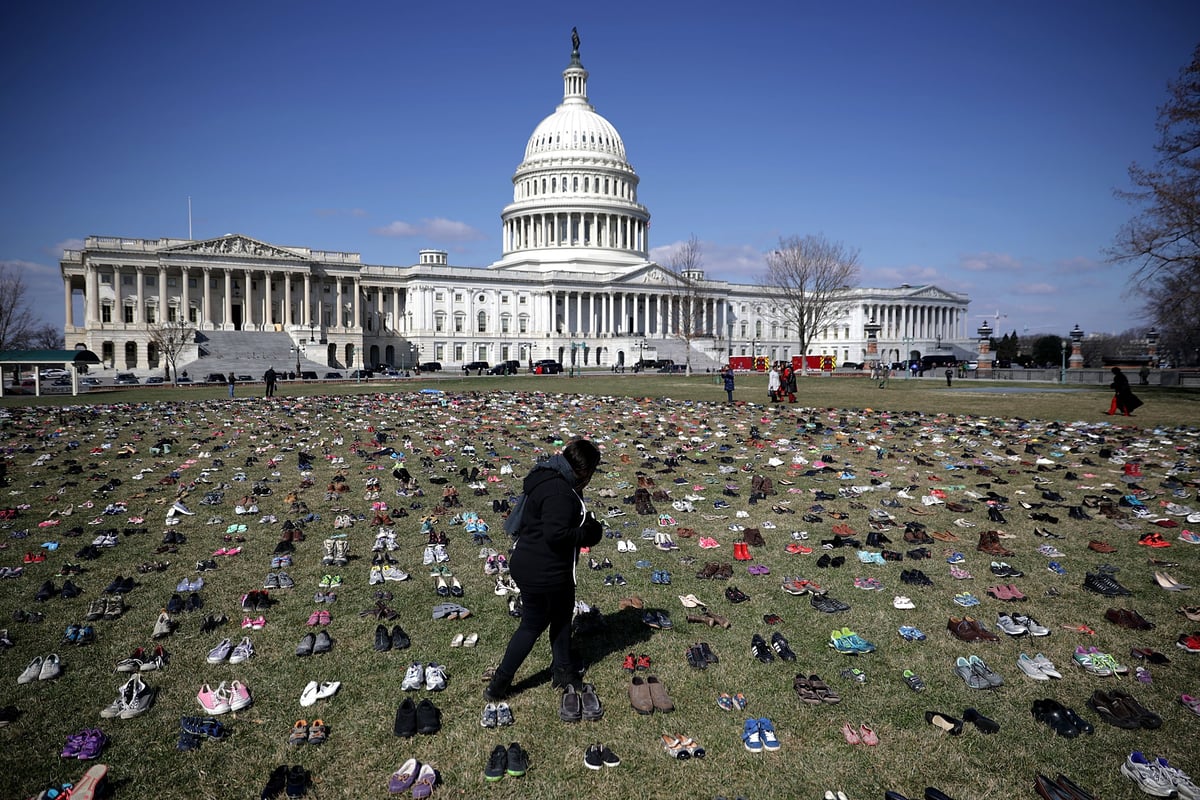 In March 2018, 7,000 pairs of children's shoes were laid in front of the US Capitol to represent the number of American children killed by gun violence since Sandy Hook. Image: Getty.

While she grows up and around the horrors of that day, the remedy for the wider issue is now in the lap of yet another president. A man who, as Ashely pointed out, knows what it feels like to mourn a child (President Biden lost his daughter, Naomi, to a car crash and his son, Beau, to brain cancer).

"For him to be able to connect to that is so powerful because he can make a difference," she said. "A big thing I would tell him is to not to give up on us, to not give up on the idea of 'you can change.'"

By sharing her story, she has joined a deeply determined cohort campaigning to ensure gun violence stays in the national consciousness and on the Government's agenda. Her former teacher, Abbey Clements, is among them, too.

As Mrs Clements wrote for Marie Claire, "Our town has adopted a new mantra since terror rained down on it: 'Newtown chooses love.' But we can't just say it—we have to do it.

"There is a complacency in this country. People just move on to the next tragedy. But I don't want it to stop there. I've made phone calls and written letters to legislators and gone to several meetings to support better gun control laws. It is an important piece of moving forward. It pulls me out of the trauma and toward something bigger."

Reply
Upvote
2 upvotes
If someone massacring little children didn't move the US to do something, nothing will.
I'd be interested to know how much the NRA donated to both major parties.
When little children were killed in their school in Dunblane, Scotland things changed pretty swiftly - gun control and especially access to schools - because people were united in grief and in best efforts to prevent it happening again.

Reply
Upvote
I actually agree with restrictive gun legislation and I'm as conservative as you can get. Problem is in order to get federal legislation through it has to go through both houses of congress + not be vetoed by Biden and even then when it is challenged/appealed by the gun lobby it has to be accepted as constitutional by the supreme court(ie not contravene the 2nd amendment). A tall order considering the supreme court has 6 right wing judges and 3 left.

Reply
Upvote
@michael Clinton managed it in 1994- it’s been done and can be done again. Especially now the NRA has disintegrated and lost their lobbying power.
The Supreme Court won’t be an issue in banning or restricting assault weapons and limiting ammunition, as the 2nd amendment only applies to the right to own a gun for self defence. In 60 cases brought before them the appeals courts have decided that there’s no constitutional right to assault rifles, and the Supreme Court has declined to take any of those cases, and they let the Clinton laws stand. Even with 6 conservative judges they’re not going to go against that level of precedent.
News
General
Opinion
True Crime
Politics
Sport
Explainer
Entertainment
Celebrity
Reality TV
Movies
TV
Books
Rogue
Royal
Lifestyle
Beauty
Fashion
Weddings
Home
Wellness
Health
Fitness
Travel
Food
Parents
Before The Bump
Pregnancy
Baby
Kids
Teens
School
Parent Opinion
Work & Money
Money
Finance
Career
Lady Startup
Relationships
Sex
Dating
Separation
Friendship
Family
Real Life
Couples