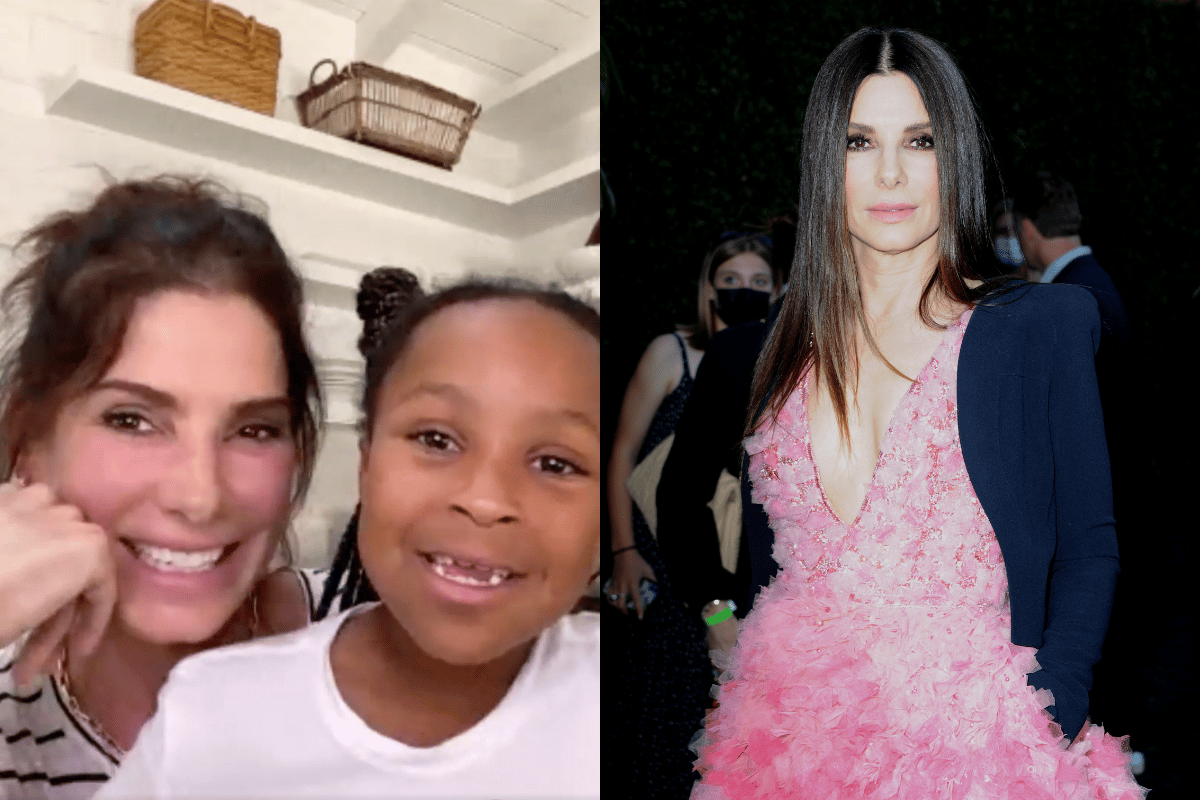 This post deals with violence and suicide, and could be triggering for some readers.

Sandra Bullock made the announcement this week that she's stepping away from Hollywood.

After touring for her latest film, The Lost City, the actor will betaking a break to spend more time with her "beautiful babies." But she was quick to note that she will be back eventually.

"I'm not retiring, just going to not spend time in front of the camera for a while," she told PEOPLE. "I have beautiful babies. I'd rather look at them."

Bullock added: "I'd rather look at them every day and have them be mad at me, and annoyed, and make memories with them for right now."

"I never said I'm retiring, [If] I decide to retire, then I'll make that announcement," she continued, before adding: "[it will be] a very important announcement that no one will care about."

The statement was a look into Sandra Bullock’s private life - something we've rarely seen over the course of her 35 years in the spotlight. But what do we know about her life off screen? Let's take a look.

Sandra Bullock adopted her first child, Louis, in 2010 from New Orleans with her then-husband, Jesse James. At the time it had been a tumultuous period for the actress, who discovered her husband’s infidelity in the middle of the couple’s adoption process.

The two divorced, and Bullock became a single parent to Louis, who is now 11 years old. She has steadfastly maintained his privacy.

In 2015, the A-list actor revealed that she also adopted a daughter, three-year-old Laila (pronounced Lila). Bullock had fostered the young girl before finalising the adoption. 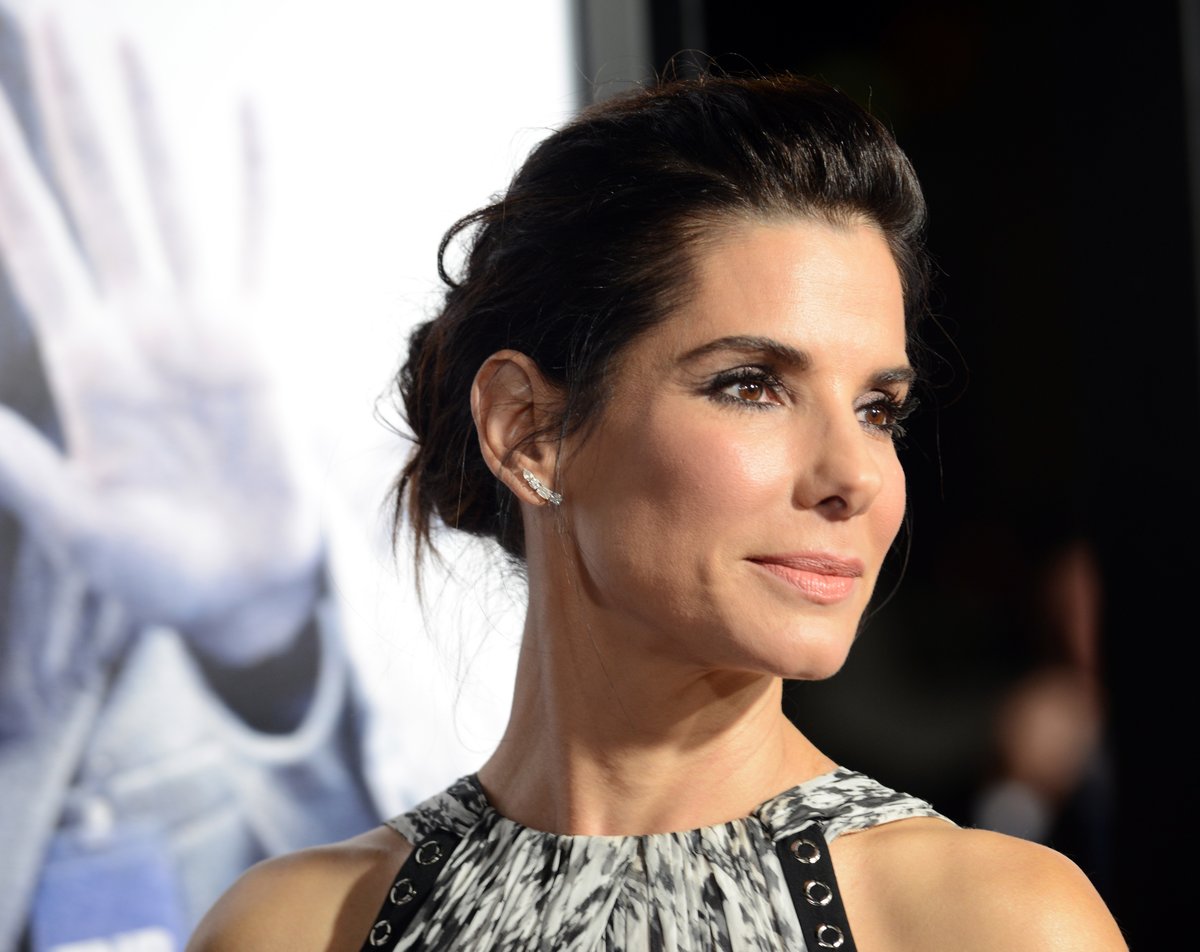 "It gets deep, and it gets dark. When I first went through the process myself, you have to prove that you are a capable parent, and you are in the judgment cage," she said.

Bullock announced the news of her daughter via a cover for People Magazine, after paparazzi threatened to make it public.

"You feel it's very much like witness protection," she told the publication. "Unbeknownst to me, a photographer had followed us and took a photo of us in line. The next day, I learned that a photo of her was being shopped around for sale to every outlet around the world. I had promised and legally agreed to protect her from something like this, and here I was chasing down lawyers — having them begging to keep her safe."

She further told People: "When I look at Laila, there’s no doubt in my mind that she was supposed to be here.

But she also shared that at the beginning, it took patience for Laila to settle into her new family life.

"I knew she was scared, and all I wanted was for her to know Louis and I weren’t going anywhere." 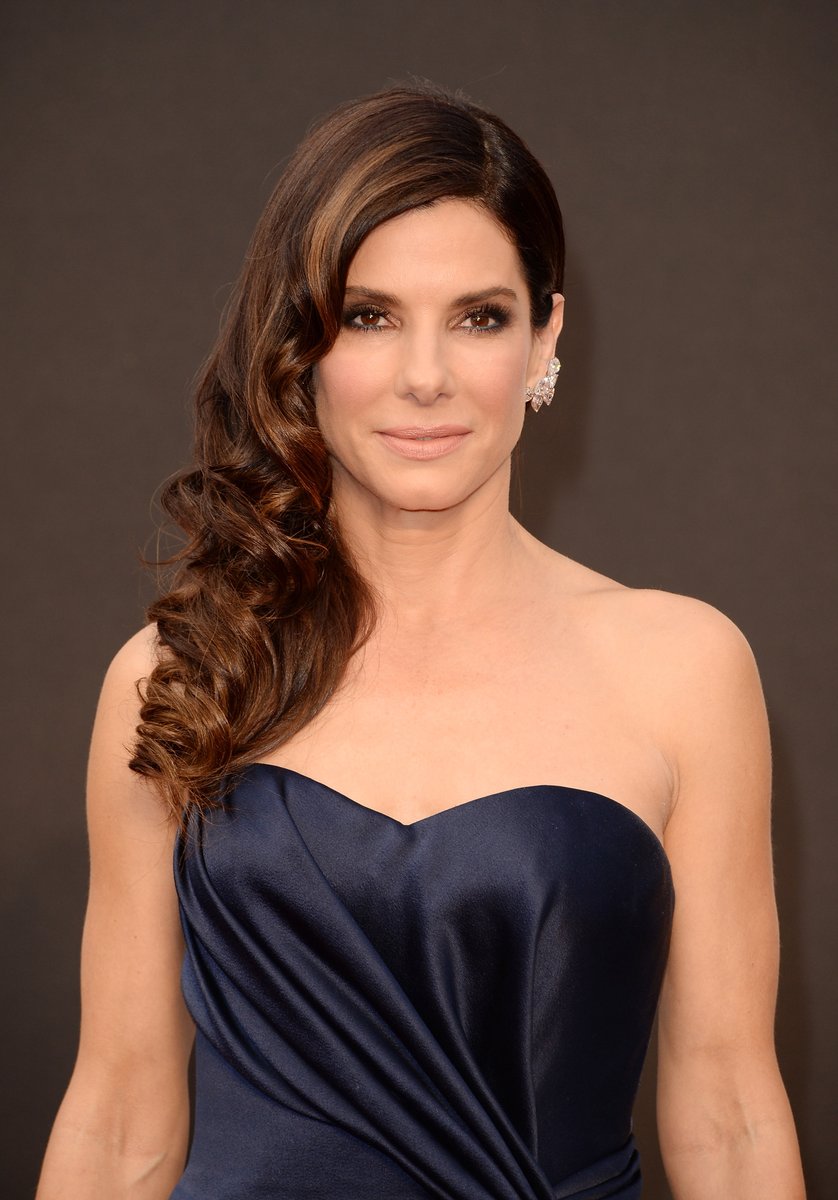 In 2018, the actress talked about her children in an interview with InStyle: "Let's all just refer to these kids as 'our kids.' Don't say 'my adopted child.' No one calls their kid their 'IVF child' or their 'oh, s**t, I went to a bar and got knocked-up child.' Let just say, 'our children'."

The Bird Box actor also shared some information on their personalities, describing her son Louis as "super sensitive".

"He's wise and kind. I saw that when they handed him to me. There was a spiritual bigness to him," she said.

When speaking of her youngest this week, Bullock said she is sure her daughter will grow up to become president.

"[I'm] going to be at the White House... I'm going to be doing some redecorating," she told People Magazine.

It's not often the actress speaks about her two children, however she beamed while explaining how they view her: "When I'm gone, I'm missed, when I'm there, I'm annoying, and that's exactly the way it should be." 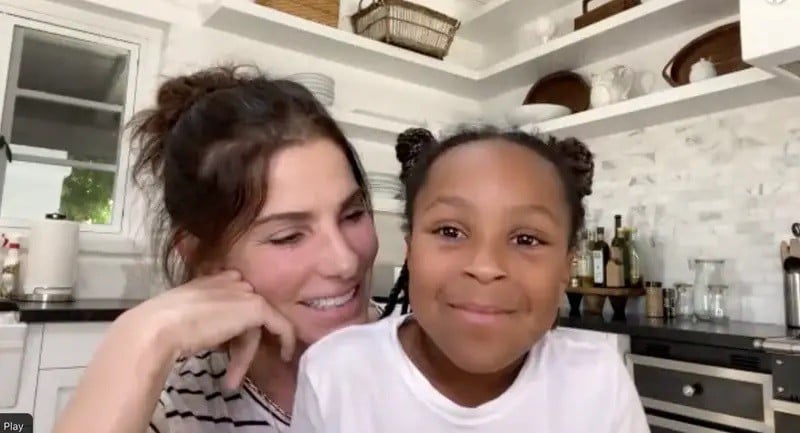 When asked if either Louis or Laila think she's a "cool" mother, she said: "No, not at all. Not unless I bring home some kind of treat. Last night I came home with doughnuts. I was so incredibly cool at that moment!

On Red Table Talk, Bullock opened up about the fear she feels as a white mother of two Black children, trying to keep them safe.

"As a white parent who loves her children more than life itself, I'm scared of everything."

"I know I'm laying all kinds of existential anxiety on them," Bullock said. "I have to think about what they're going to experience leaving the home. They're going to have my fear, but how can I make sure that my anxiety is accurate, protective?"

Bullock also spoke about her decision to educate and be transparent with her son on the systemic racism that exists.

Bullock added: "I let them teach me and tell me what they need to know. I thought I was educated and woke, but guess what? I wasn't."

The actress also spoke with The Grio over a sobering conversation she had with her son.

"I have a beautiful Black son, at the age of six he popped on a hoodie and I was like, 'We’re gonna have a conversation. It’s different for you. People are scared and will react to you differently than if you were a white boy'," she said.

"It’s a scary thing to think that when your beautiful son grows up and becomes a man, someone’s not going to treat him the way that you treat him simply because of the colour of his skin.

"It breaks my heart and makes me full of rage. But all I can do is my job. Protect them. Enlighten them. Show them their power. Show them how to be safe. But the system is not fair.”

"I haven't been alone since that day." Sandra Bullock on her 2014 home invasion.

Bullock awoke in her Los Angeles home at 5.30am on June 8, 2014, to the sound of “loud banging”. Soon after she heard an explosion.

The actress, who was home alone, then saw a man walk past her bedroom door. Fearing for her life, she rushed to hide in her wardrobe, locked herself in and dialled emergency services as a man “pounded” on her bedroom door. 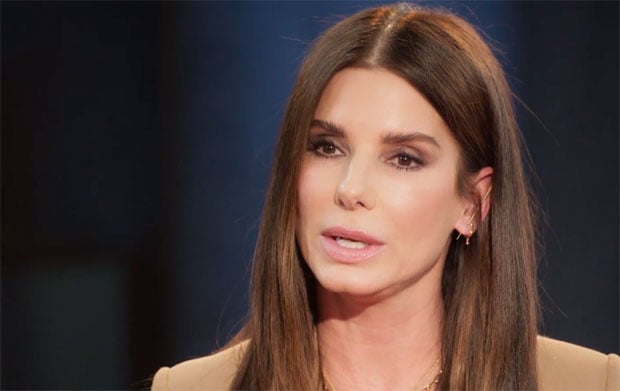 A notepad the man was carrying contained scribbled diary-like entries. One said, “I love you and you are very special to me. And without you in my life there is only misery. I’ve waited and waited but you never come.”

In other parts, according to court papers obtained by The Wrap, Corbett described “lurid and sexual acts” and entries “detailing his intention” to “sexually assault” the actress. Chillingly, surveillance cameras around Bullock’s home showed that he had skulked outside it three days earlier.

Speaking on the horrific ordeal on Red Table Talk, Bullock said she has suffered PTSD since and hasn't "been alone since the day" of the invasion.

Years later, Bullock’s convicted stalker died by suicide in 2018 after a standoff with police.

“What’s sad is that the system failed him,” she said on Red Table Talk.

She has since sought treatment for her PTSD and found that EDMR therapy has been the “most healing” option for her.

The academy award-winning actress once said she wouldn't recommend dating her, "because I’ll probably make you miserable".

Despite her own critique, Bullock has been in a number of relationships. She's even dated a few of her co-stars.

In 2002, she famously dated Ryan Gosling, who she met while co-starring in the psychological thriller, Murder By Numbers.

The couple made headlines for their age gap. Bullock was 37-years-old when they started dating, and Ryan Gosling was 21-years-old - giving them a 16-year age gap. "I live my life at a manic pace, and he's taught me to disregard all that isn't important. He's like a little Buddha," she told Cosmopolitan in 2003.

She also shared that movie sets are "breeding grounds for that kind of stuff, so you just have to have a good set of rules going into it."

"It's the greatest dating service on the planet. You take two people who normally can't leave the house, who don't know if people are with them for the right reasons, and they get paired up because they have chemistry, and they happen to fall in love."

In July 2005, Sandra Bullock married Jesse James, who was the host of Discovery Channel's Monster Garage. 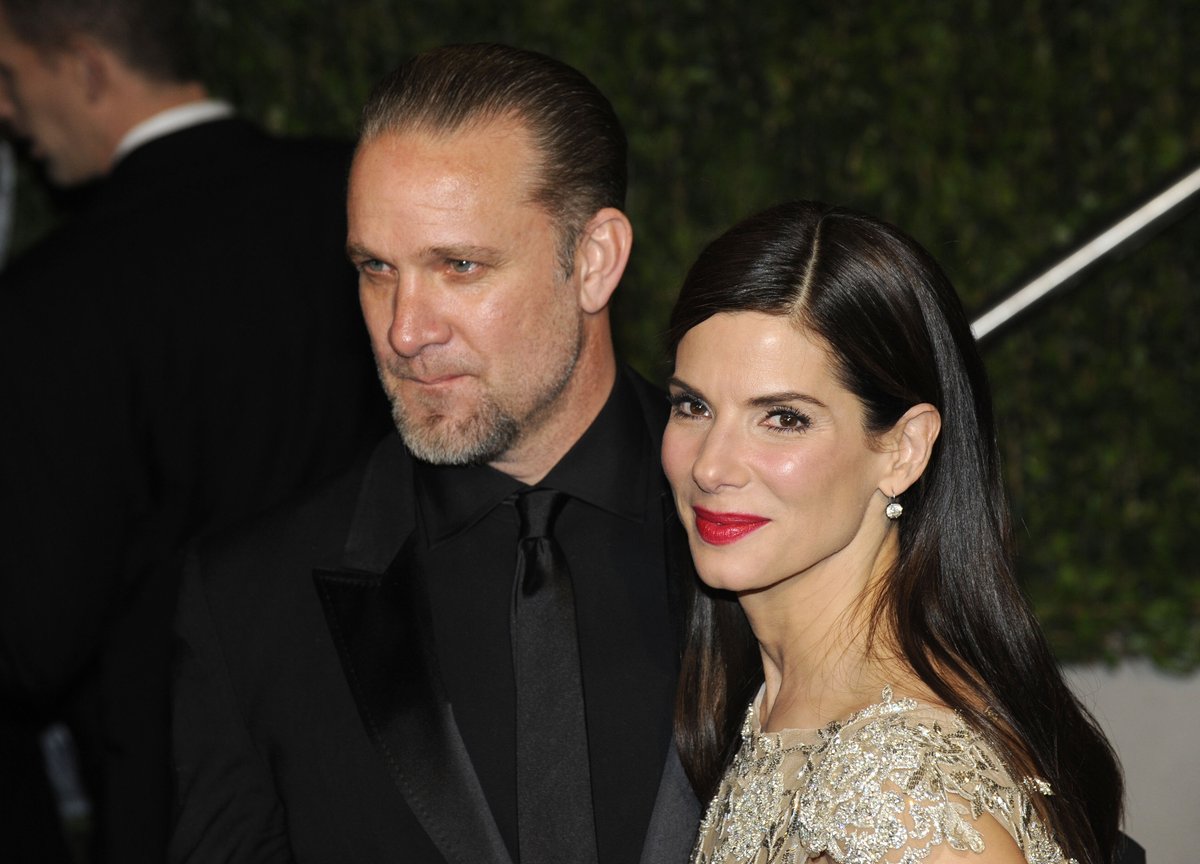 Image: Getty. Asked about her husband's tough public image, Bullock told People in 2005: "No one knows what someone is like based on appearance. There are people who look very innocent, loving and churchgoing who cheat on their spouses, don’t take care of their children and are horrible to humanity."

In 2010, just 10 days after Bullock won the Best Actress Oscar for The Blind Side, Bullock learned - along with the rest of the world - of her husband's infidelity.

"It's because of my poor judgment that I deserve everything bad that is coming my way," James said in a public statement at the time. "This has caused my wife and kids pain and embarrassment beyond comprehension and I am extremely saddened to have brought this on them. I am truly very sorry for the grief I have caused them. I hope one day they can find it in their hearts to forgive me."

Since 2015, Bullock has been dating photographer Bryan Randall. The two met when Randall was hired to photograph her son's fifth birthday party. 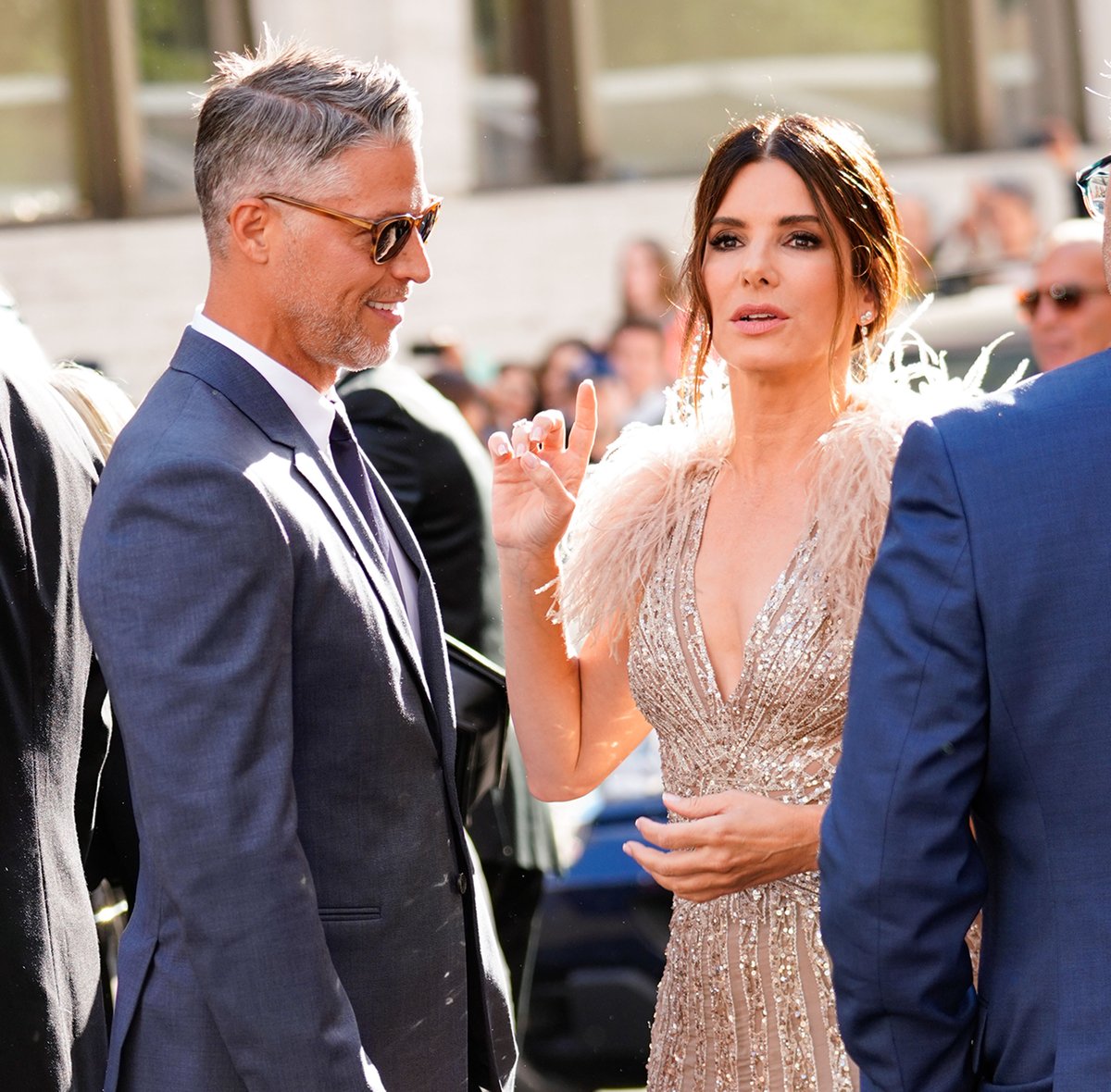 Together for five years, Bullock has remained relatively quiet about her relationship, but did tell InStyle in 2018 that "he's super kind".

On Red Table Talk, Bullock described her partner as a "very patient" man and "a saint."

Bullock and Randall have made one public appearance together for her Oceans 8 premiere, but have remained out of the spotlight since. And it looks like it will stay that way for the foreseeable future.

After all, she is one of the few celebrities who do not have any form of social media.