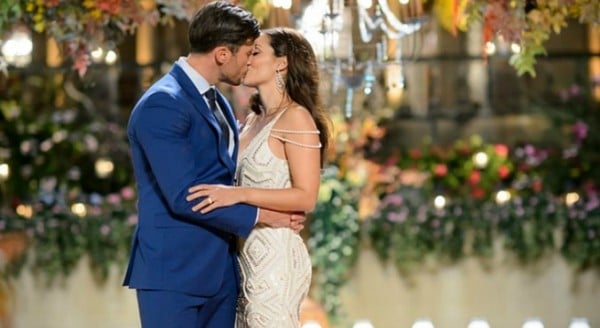 Just a reminder of how sweet the season 3 finale was. (Image: Shine Australia)

Thanks to all the hijinks of The Bachelorette, ex-Bachelor Sam Wood has been able to step away from centre stage for a few months — well, as much as you possibly can when you’re a nation-wide household name.

Since we last saw him — professing his love for Snezana Markoski in the finale, remember? — the 34-year-old personal trainer has opened a gym facility, The Woodshed. He’s also been busy nagivating the challenges of a long-distance relationship; Sam is based in Melbourne, while Snez and her 10-year-old daughter Eve are in Perth. They’re still going strong, FYI.

We caught up with Sam this week, and while we didn’t receive a rose, we did squeeze out some good intel.

First things first. Did you read Rosie Waterland’s Bachelor recaps, and are there any ‘allegations’ you’d like to clear up?

“I think Rosie’s highly intelligent and hilarious, I must say — even if it is at my expense, ol’ ‘Bachie Peen from Tassie’. On the whole I think she’s spot on. The only thing that frustrates me, and this is not specific to Rosie: on the show, you’re in that bubble where unless you’re talking about ‘romantic’ stuff, it doesn’t make the cut. So your true personality doesn’t necessarily come across… There were a lot of fantastic funny moments that didn’t get captured so it mightn’t seem that I have as outgoing a personality as I do or as good a sense of humour as I pride myself on.”

Do you and Snez work out together?

"Snez came down last week for her first workout at The Woodshed ... We just did a functional-based circuit with ropes and sleds and stairs and bike. It was high intensity interval stuff. She was pretty impressive, actually. She's tough, she does boxing and different circuits and stuff back home. She's also very hard on herself — 'I'm so unfit, I don't want to see you, you'll be so fit'. I was like, 'Don't be ridiculous.' She was being ridiculous, she was great. I don't know, I'm not really the 'lets always train together' type." (Post continues after video.)

Have you heard any odd rumours about yourself?

"Hundreds. Every week. We've been in Bali for the weekend and Snez sent me a photo from OK! Magazine 15 minutes ago saying 'Sam and Snez's secret honeymoon' on the cover. So, just another one to add to the pile."

"Yeah, it is. We've been able to see each other every two weeks at most, most cases every weekend... Eventually, we're really going to want to live together, we've spoken about that, we've obviously just got to work it out. We also don't want to rush into it. Eve's still at school for the year and Snez is in the last year of her degree [in molecular genetics]. So I think we need to wait until the end of the year and then we're going to go on a holiday and then work it all out."

You've developed a 30-day eating and fitness plan for Helga's Carbdown to Summer campaign - and, gasp, it includes bread. What was your philosophy while putting it all together?

"I think some people are scared of bread, scared of carbs, and they don't need to be. Carbs are good, carbs are important, an essential part of our eating is making sure you eat the right ones at the right time and it's part of a balance. [My philosophy is] don't cut out things altogether and feel that that's highly likely to be sustainable."

Do you have a favourite recipe from the plan?

"Well... it's sentimental. Parmigiana. There's some sentimentality in there, I think... but I do love that."

NB: For non-Bachelor viewers, Snez told Sam to pronounce her name like "parmigiana" when they first met. (Post continues after gallery.)

What's the biggest fitness misconception you hear from your clients?

"One of the big ones with women is to avoid strength or resistance training; I think they fear it's going to 'bulk them up' or put on too much muscle. I think there's a fundamental difference between resistance training, that might be body weight stuff, pilates, there's a heap of fantastic resistance options that are perfect for women, including weight training, that don't have to be heavy bulky type training. A lot of the time they don't have the genetic makeup to put on the muscle anyway. It's going to tone them."

Let's talk about gym etiqutte. Do your clients do anything you wish they wouldn't?

What advice would you give someone regardless of their fitness level?

"Make sure there's variety, and make sure that you're not afraid to get out of your comfort zone. I think doing something you're really comfortable with all the time and expecting remarkable change is unrealistic. That doesn't mean you have to push yourself until you vomit, but you do have to be comfortable with getting uncomfortable."

Were you a fan of The Bachelor?

Sam's 30 Day Carbdown Meal & Exercise Plan is available to download here. You can also visit the Helga's website for more information about their new Lower Carb Range and the Carbdown campaign.