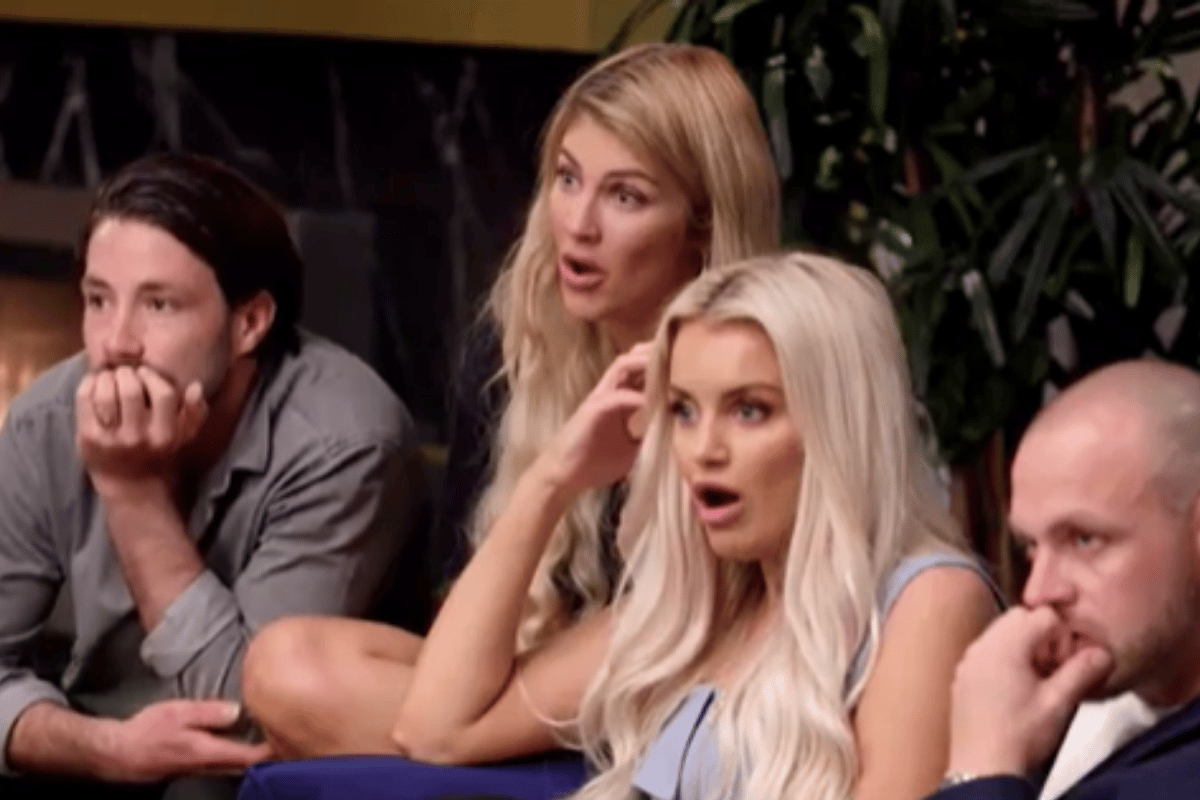 1. Wine shall be thrown on tonight’s episode of MAFS, but who is holding the glass?

That's right folks. It looks like we have another MAFS wine-throwing incident on our hands. And it's rumoured to all go down at the dinner party tonight.

According to the So Dramatic! podcast, Bryce Ruthven apparently throws his drink at fellow contestant Sam Carraro after they get into a fight right before the dinner party.

"Before the dinner party had even started they are going at each other and having this huge blow-up on the couches," said host Megan Pustetto.

"Sam asks Bryce what his problem is, Bryce then says that Sam disrespected women…"

Sam then apparently calls Bryce "ugly" and "has a go at him for putting Melissa [Rawson] fourth in the ranking challenge and calling her unattractive after sleeping with her".

"They have this explosive argument before the dinner party and apparently everyone is just yelling at each other across the room."

Supposedly Cameron Dunne then jumps in to try and mediate the argument but Sam "threatens to expose him and says that he’s got dirt on him so he better shut up".

"They all go inside and it’s on like Donkey Kong between them all night and they’re having non-stop digs at each other across the table."

Then things really go down hill.

"Sam says [Bryce] has the personality of a doormat, but it’s an insult to doormats" and accuses Bryce of making Melissa cry.

That's when Bryce throws the wine on Sam.

"They both jump up and it’s about to get physical until the boys step in to break them up and then Bryce storms out of the dinner party."

Well... if the rumours are true then it looks like we're in for a wild night of MAFS.

2. A little look into Georgia Love and Lee Elliott’s minimoon.

After tying the knot on Friday, Bachelorette couple Georgia Love and Lee Elliott are enjoying a very romantic 'minimoon' in Tasmania. And the pictures will make you want to jump on a plane STAT. 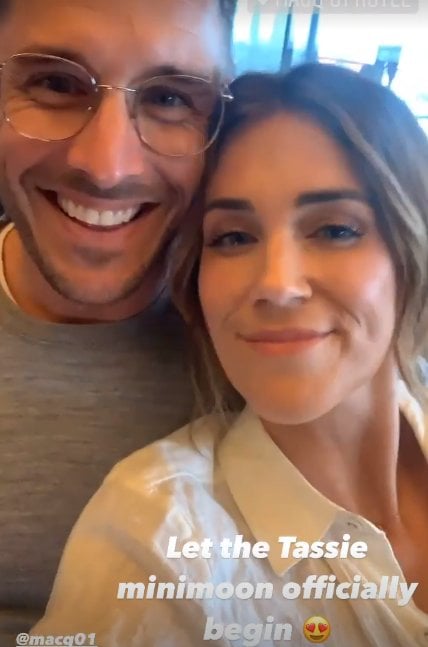 The 32-year-old also shared photos of her and Lee enjoying a glass of champagne on a waterfront rooftop and enjoying a helicopter ride. 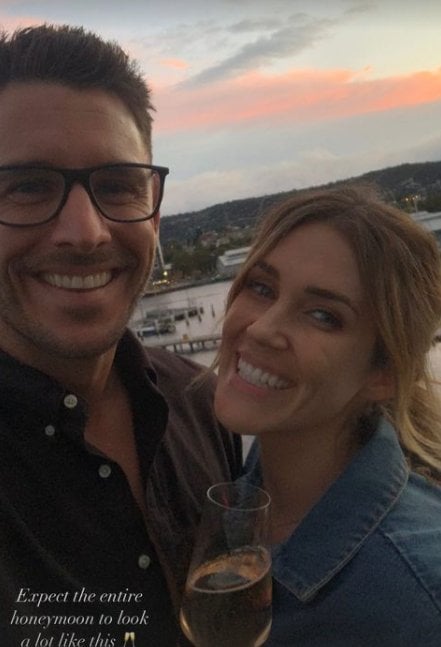 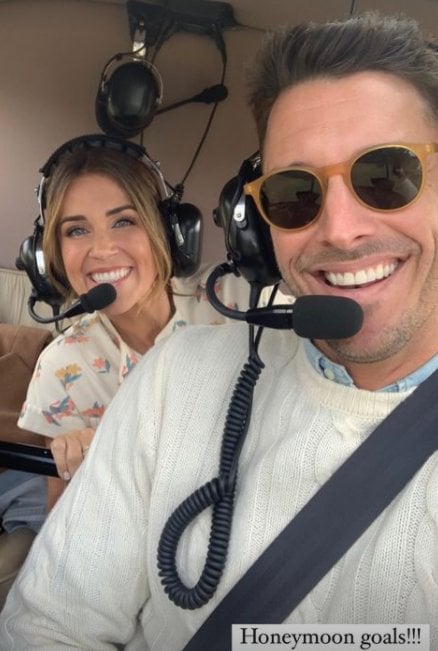 Lee also shared some photos over on his Instagram stories.

"Honeymoon kicked of with a walk around Hobart followed by brekky on our balcony," he captioned one of the posts. 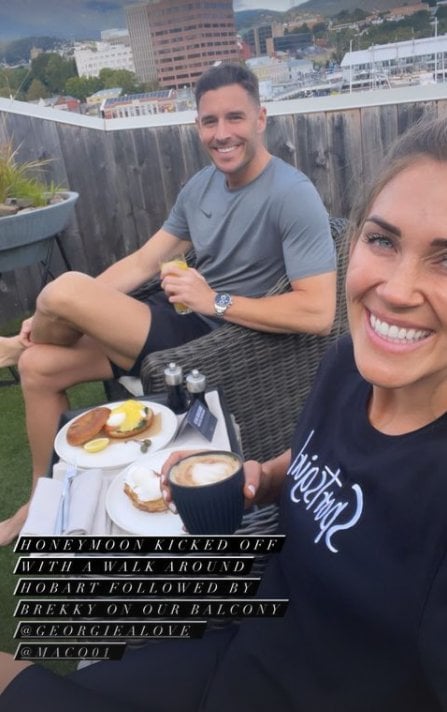 3. Looks like Khloe Kardashian and Tristan Thompson are planning on having another baby, but this time via surrogacy.

The latest promo for the final season of Keeping Up with the Kardashians suggests that Khloe Kardashian and Tristan Thompson are considering a second child.

In the latest clip shared on Instagram, the couple - who share one daughter, True - briefly discussed their concerns with having a baby via surrogate.

"You're trusting the surrogate with your unborn child and it's just scary," Khloe told Tristan.

While a voiceover of Scott Disick questions whether the couple should have another child when they aren't even officially back together.

"You're talking about having another child together but, you don't want to say you're official?" Disick voiced.

"We're not a secret," Thompson replied.

Recently, they've been working at rebuilding their relationship, however, neither of them have announced if they are officially back together.

The final season of Keeping Up with the Kardashians begins on March 19 on Hayu.

4. Samantha from MAFS thinks First Dates producers are much better matchmakers, and that seems accurate.

Well, it appears that Samantha from Married at First Sight thinks the producers of First Dates are better matchmakers. And well, we don't blame her.

In footage obtained by the Daily Mail, the 32-year-old told her Instagram Stories that they "match them properly" on the other reality dating show.

"Yeah, they actually match them properly," Samantha told her friend.

She then continued to complain that the guy on First Dates wasn't on Married at First Sight.

In a third video, Samantha continued to gush over Jake from the show saying, "Mate, that's my type".

The videos obtained by the publication were filmed on January 29, ahead of filming the Married at First Sight reunion episode in February. So it suggests that she and Cameron don't last.

5. All the info that didn't make the cut in last night's Meghan and Harry interview.

Prince Harry and Meghan Markle's tell-all interview with Oprah Winfrey was... a lot.

The discussion covered everything, from their mental health to their expanding family to alleged racism within the royal family and Harry's strained relationship with his father.

It's been a lot of information to take in. But, I hate to be the one to break it to you, there's more.

Oprah and broadcaster CBS have shared even more information that didn't make the final cut of the two-hour, exhaustive sit-down, so grab a drink, get comfortable and buckle up: Here's what's come out since. 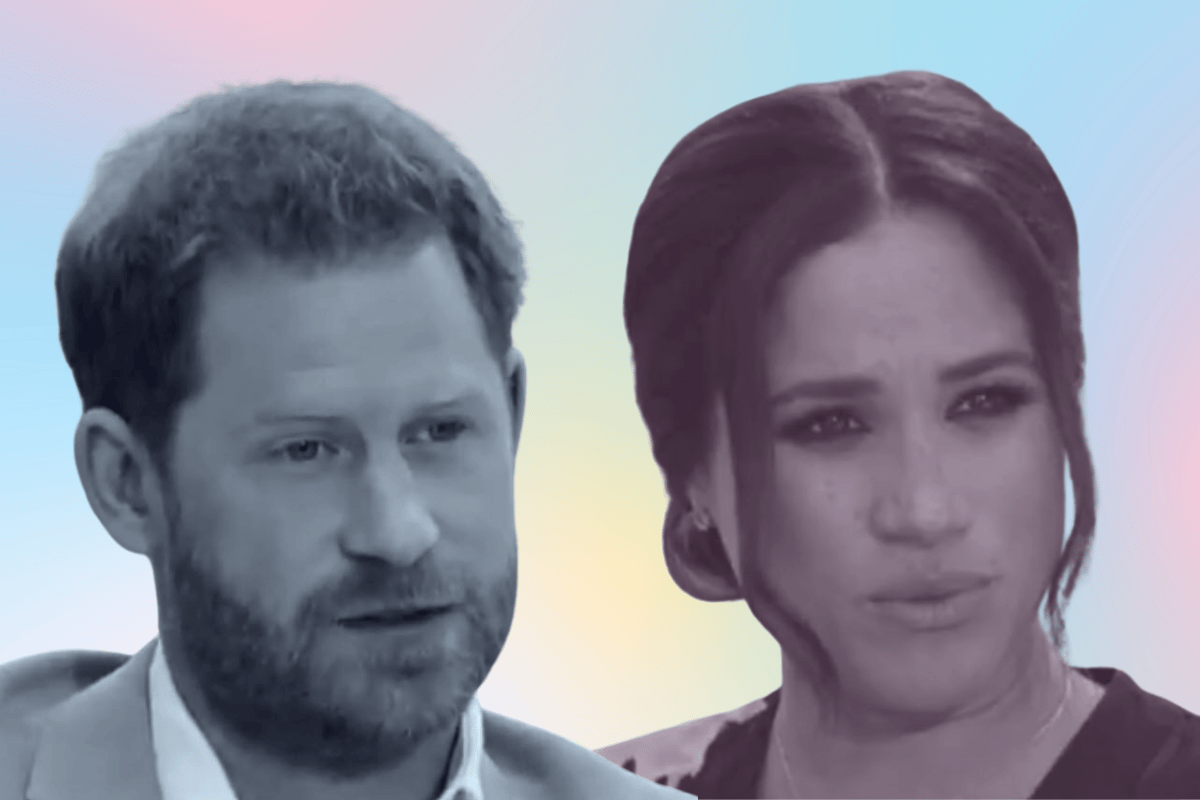 Who didn't make those comments on Archie's skin tone.

Oprah said conversations about the skin colour of Harry and Meghan's son Archie were not had by the Queen and her husband Prince Philip.

In the original interview, Meghan said there were "concerns and several conversations" with Prince Harry about "how dark Archie's skin might be when he was born".

She declined to say who these conversations were with.

In Oprah's follow-up with CBS This Morning, she revealed Harry had told her it was not his grandmother nor his grandfather that were part of those conversations about Archie's skin colour.

WATCH: @Oprah says “it was not his grandmother nor his grandfather” that were a part of the conversations about Prince Harry & Meghan's baby's skin color. #OprahMeghanHarry pic.twitter.com/LpPLmkUEFR

Winfrey said Harry had not told her which member of the royal family was involved in the conversation.

"He did not share the identity with me but he wanted to make sure I knew, and if I had an opportunity to share it, that it was not his grandmother or grandfather that were part of those conversations.

"He did not tell me who was a part of those conversations."

For more info that didn't make the cut in Meghan and Harry's interview, read our earlier article here.