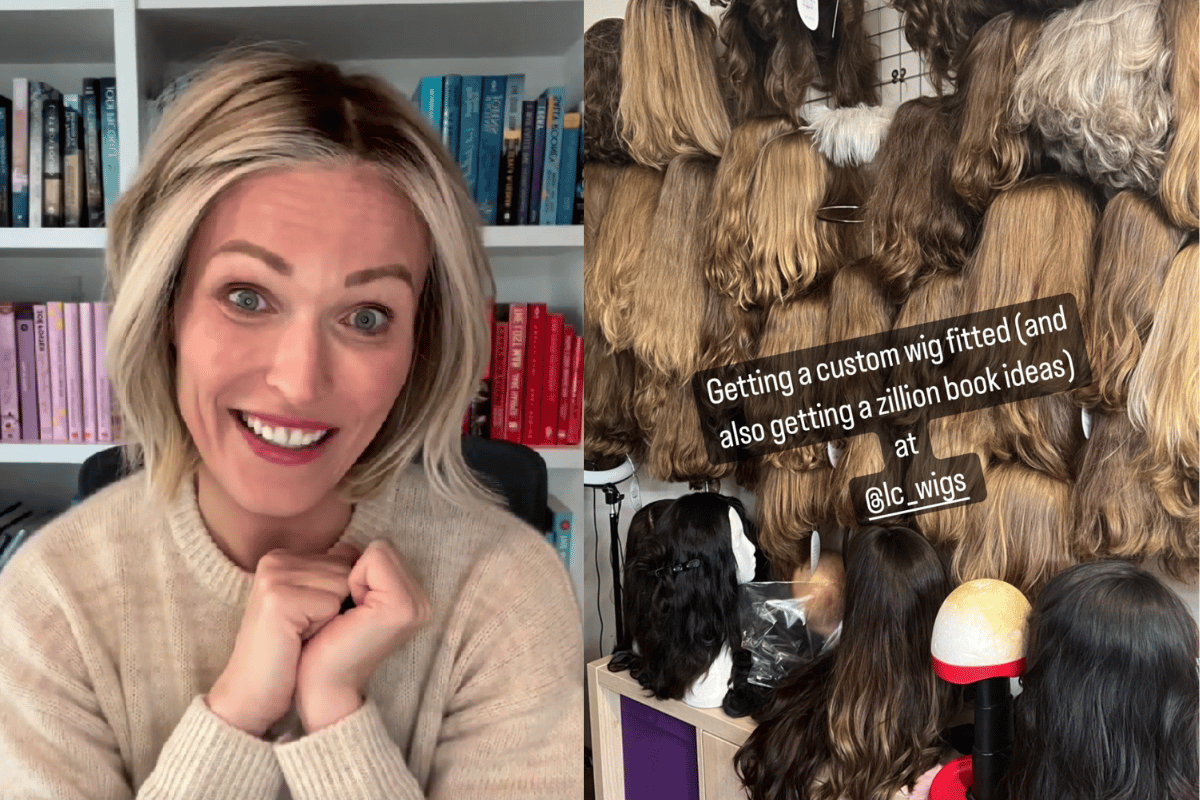 Things you might know about Sally Hepworth: She's a best-selling author. She's a mother of three children. Her husband is her assistant, and he loves it. She once attended a swingers' party. You'd be best mates if you ever met.

Things you might not know about Sally Hepworth: She's suffered from a hair-pulling disorder since she was 12, and now wears a wig.

The Australian author recently opened up about her condition on Instagram, with hundreds upon hundreds of followers praising her for normalising hair loss. The post now has just under 40,000 views.

Because, as common as it is, hair loss is something we don't seem to talk about.

Watch: Sally Obermeder talks on No Filter about the moment she had to shave her head. Post continues below.

Between menopause, periods, birth control and pretty much every other women's health issue, hair loss is just another one of those 'taboo' topics we don't discuss openly enough.

And it's funny, really. Not funny, funny - but considering how many of us deal with it (you can step into a room and at least one person in that room will struggle with thinning hair), it's a conversation that needs to be louder.

It's a fickle beast, hair loss. And it's more complicated than it seems, because no two experiences are the same.

Speaking with Mamamia, Hepworth said, "I have a condition known as trichotillomania, which is really just a fancy way of saying I pull out my hair from the root when I’m anxious."

Heard of it before?

Commonly called 'trich', the hair-pulling disorder usually begins in late childhood and is something that typically lasts for life, taking an emotional and social toll on individuals.

"The Wikipedia definition describes it as 'a mental disorder that involves recurrent, irresistible urges to pull out hair from your scalp, eyebrows or other areas of your body, despite trying to stop.' For me, I pull the hair around the crown of my head," the author shared.

Given trichotillomania is a silent disorder, many people keep it a secret - so it's surprising to learn just how common this condition is.

US-based studies estimate it affects around two to five per cent of people - however, its prevalence in Australia remains unknown due to the lack of research funding. The result? It's pretty poorly understood.

For Hepworth, compulsive hair-pulling is something she's lived with for most of her life. She was a tween when she started doing it, which soon resulted in a bald patch on the crown of her scalp.

"The first time I recall pulling out my hair was around age 12, during a long drive from Melbourne to Queensland. Thirty years later, I’ve never quite shaken the habit, despite hypnotherapy, psychology, and a rapidly growing bald spot."

Dealing with this distressing disorder, combined with ageing and the common effects of perimenopause, Hepworth said she has been experiencing thinning hair.

"I have periods when I don’t pull out my hair, but the habit always returns in times of stress - suffice to say after the last few years my hair is fairly thin on the ground, so to speak. Combine tricho with a bit of perimenopausal hair thinning, and I have found myself rather follically challenged of late."

As Hepworth told us, learning to deal with her hair loss has been a journey.

"I started with clip-in hair wefts to add volume to my hair. I’d seen people use them on TV, and I thought they were a clever idea and seemed easy enough to use. I used these for a week or two with some success, but they didn’t cover the crown of my head where I most desperately needed coverage."

"It wasn’t long before I disappeared into the rabbit hole of alternative hair, and that’s where I found "toppers" - a hair-piece which covers the crown of the head. I bought one of these, and while I was online, found myself looking at wigs as well. They looked so damn good, I decided I needed to try one."

"Now I’m the owner of several wigs and toppers and I have to say, I’m obsessed. Not going to lie, having a good hair day at my fingertips is a game changer. And the upside is that I can’t pull out my hair while the wig is on. If wigs are good enough for the Kardashians… why not me?"

When it comes to favourites, Hepworth said she has a few go-to options on rotation.

"I have a Raquel Welch wig (from the Unfiltered range, in Shaded Biscuit) which I love, and a topper (from Hidden Crown), and I’m also in the process of getting a custom human-hair wig made through LC Wigs in Melbourne, which I’m very excited about." 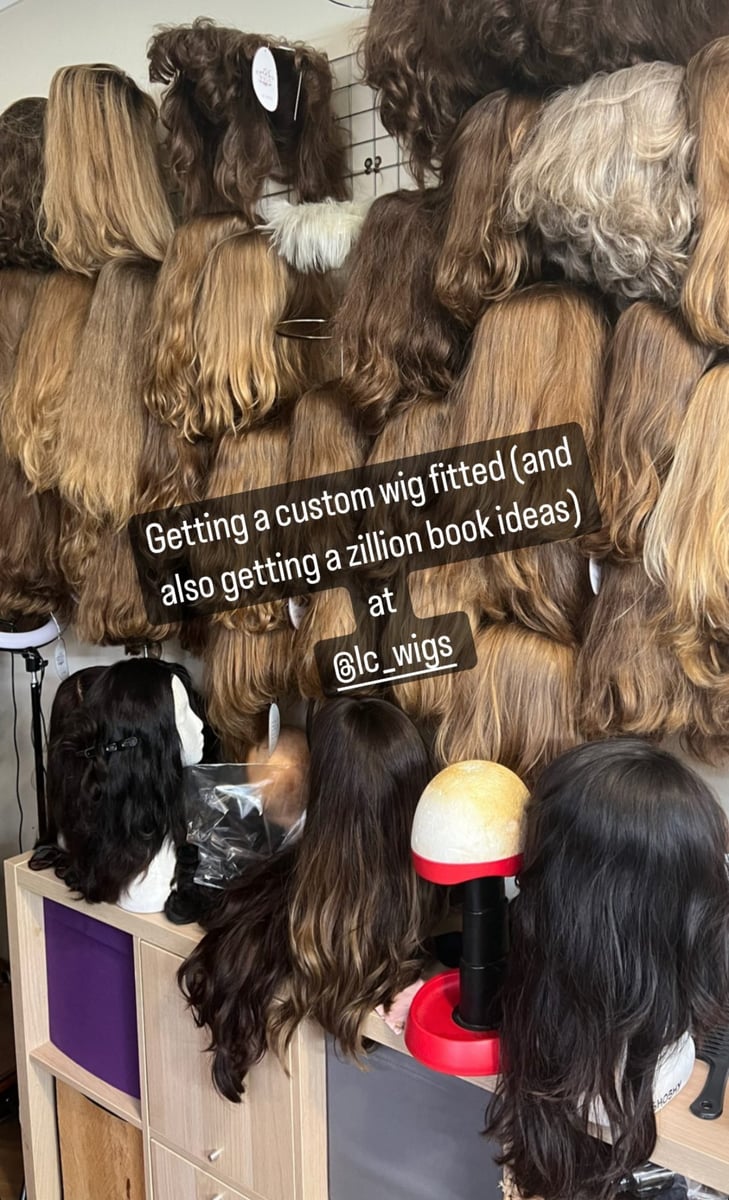 "Liron from LC Wigs is a wig-master trained in Israel, and her wigs are unbelievably realistic and incredibly comfortable."

"The process was so easy and fun - basically I showed her a picture of my dream hair and she is making it." 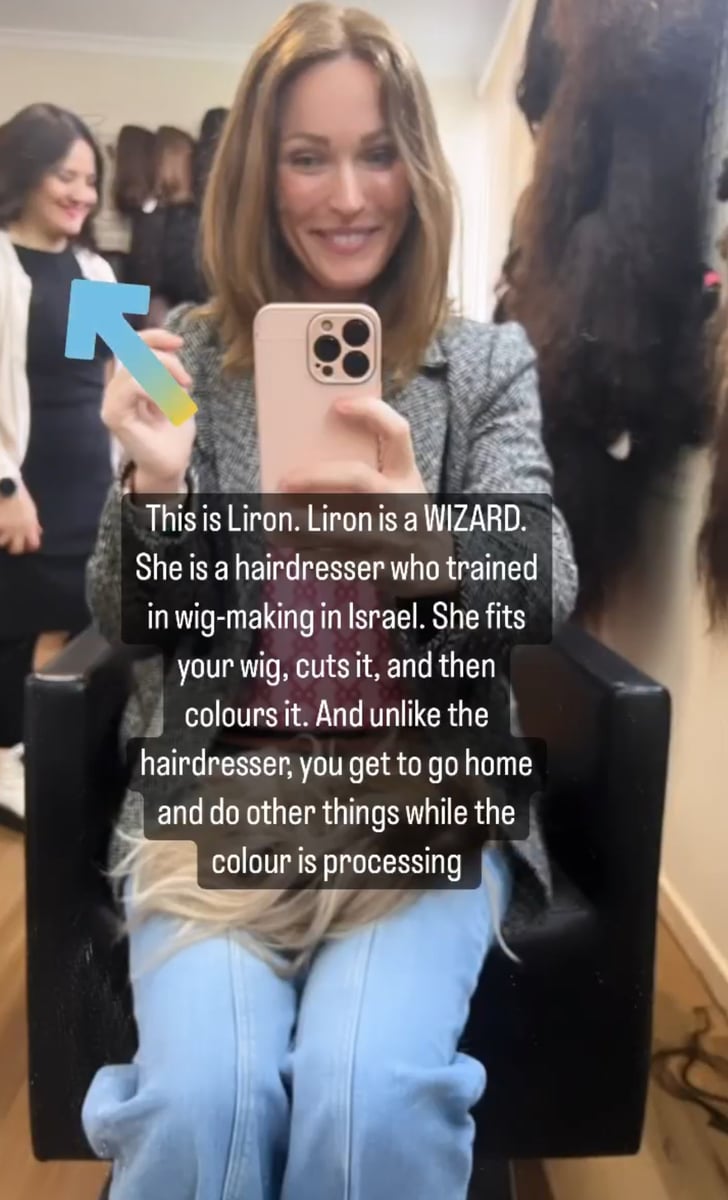 Anyone else feel like they've just found the answer to all of their bad hair days?

While custom wigs will cost you, Hepworth said the payoff, for her, is priceless.

"Custom made human-hair wigs aren’t cheap at around $3000, but when you think of the money you’ll save at the hairdresser, your wig will pay for itself. Not to mention that you’ll never have to worry about regrowth or pesky grey hairs again."

Hepworth encourages others struggling with hair loss to dip their toes into some of the amazing hair alternatives on the market - and above all, not to feel alone.

"Don’t be afraid to try alternative hair. The wig stigma is rapidly changing (thank you, Kardashians), and these days they are so comfortable and realistic that most people will never realise - unless you whip it off as a party trick like I tend to do."

"Wigs are the next big thing. You heard it here first."