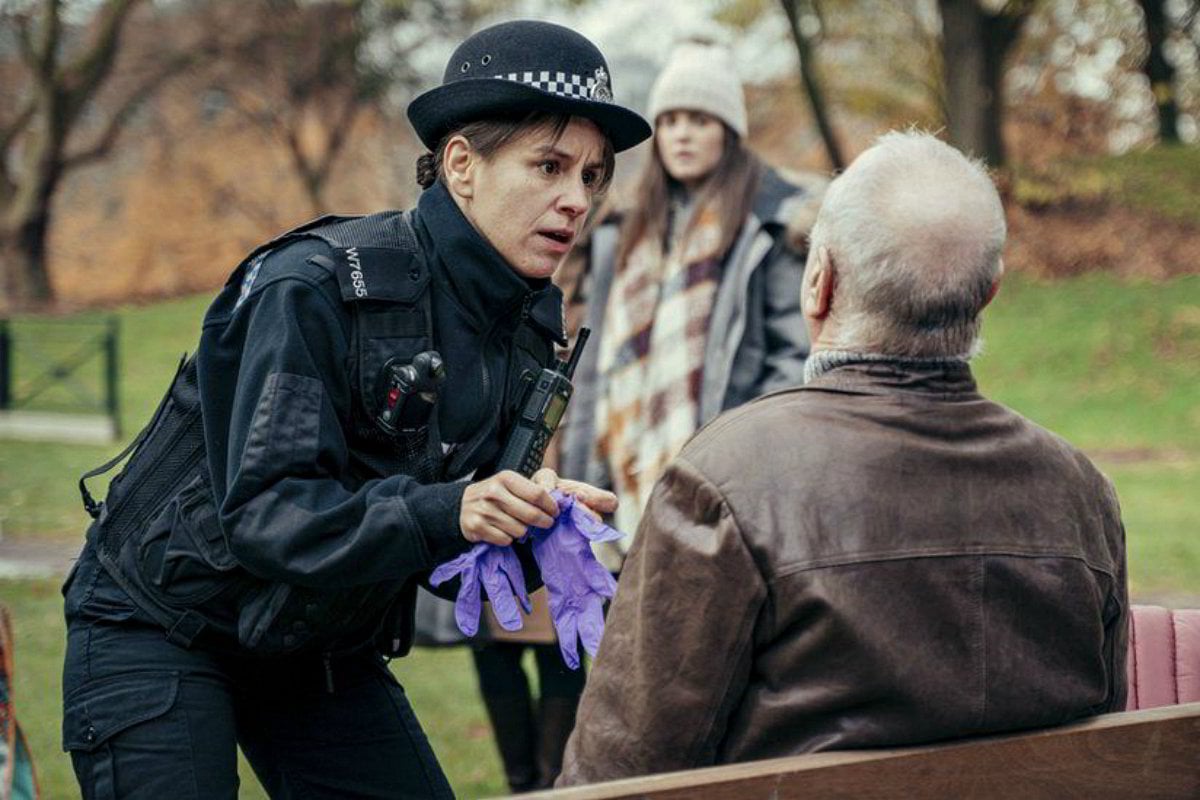 A gym employee in downtown Salisbury was among the first to notice the pair.

It was the afternoon of March 4, 2018. Freya Church was leaving work at Snap Fitness when she spotted a woman aged in her 30s and an older man sitting just a few metres away on a public bench. They appeared to be slipping in and out of consciousness, fitting and vomiting.

"I was particularly worried about her," Freya told The Telegraph. "She was slumped over on the man’s shoulder... He was gesturing at the sky, doing some kind of movements with his hands. He was looking up and his eyes were glazed."

Watch: The events have been captured in the SBS drama series, The Salisbury Poisonings.

The woman was his daughter, Yulia, who was visiting from Russia. She'd arrived in the southern English cathedral city the previous day.

On March 4, the pair went to a local pub together and shared lunch at a pizza restaurant, unaware that a lethal poison was coursing through their nervous system.

After collapsing on the pubic bench, Sergei and Yulia were rushed to hospital and placed in an induced coma. They survived. But in the coming weeks, the poison claimed other victims, forcing Salisbury into emergency lockdown as authorities scrambled to contain the invisible threat.

As explored in the new drama series, The Salisbury Poisonings (available to stream in Australia on SBS On Demand), the incident thrust the city into the middle of a tense crisis of national security and international diplomacy.

Here's the incredible true story behind the program.

In the eyes of Russian law, Sergei Skripal was a traitor.

The former Main Intelligence Directorate (or G.R.U.) officer was arrested outside his home in Moscow in 2004 and charged with high treason. Russian authorities alleged he had been feeding state secrets, including the identities of Russian agents, to Britain since 1995.

He was convicted and sentenced to 13 years prison in 2006, but he settled in the UK four years later after being traded by Moscow in a prisoner-swap program.

Yulia visited him often. Her trip to Salisbury in March 2018 coincided with what would have been her brother's 44th birthday. Alexander Skripal had died from liver failure seven months earlier and was buried in the UK city alongside his mother, Liudmila Skripal, who'd died of uterine cancer in 2012.

That March 4 afternoon, Yulia and Sergei very nearly met their own premature deaths. 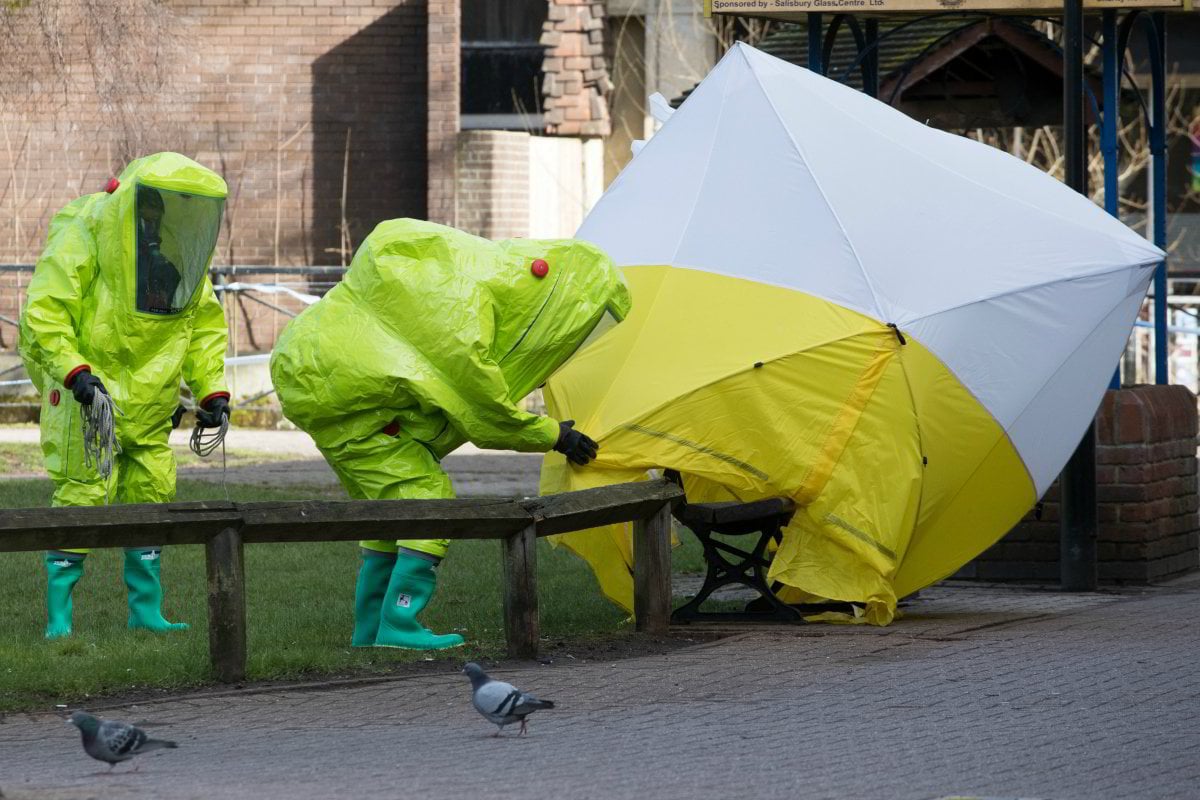 Authorities secure the bench where the Skripals collapsed. Image: Getty.

It was clear to doctors that the pair had been poisoned. But with what?

Scientists at Britain's Defence Science and Technology Laboratory were engaged to identify the substance, and the lead researcher later described their conclusion as "jaw-dropping".

It was Novichok, a lethal nerve agent developed as part of a secret Soviet chemical weapons programme during the 1970s and '80s.

It can be absorbed through the skin, ingested or inhaled, and works by blocking messages from the nerves to the muscles. It can cause seizures and, at certain doses, paralyses the muscles responsible for breathing and stops the heart.

More recently, Novichok was used in the attempted assassination of Russian opposition leader Alexei Navalny, who fell ill onboard a flight from Tomsk to Moscow last month. He was placed in a medically induced coma and evacuated to Germany, where he is currently recovering.

"It’s one of the most dangerous substances known," the DSTL scientist explained to the BBC. "It's quite unique in its ability to poison individuals at very low concentrations."

It's suspected the Skripals survived because the weather was incredibly cold, which can inhibit the effectiveness of the nerve agent, and because the source of their contamination was via touch.

The highest concentrations of Novichok were found on the front door handle of Sergei's home and, as toxicologist Professor Robert Chilcott explained via The Conversation, the palm of the hand is one of the least permeable areas of skin on the human body.

The pair were also administered antidotes and treatments relatively quickly, which was also crucial to their survival. 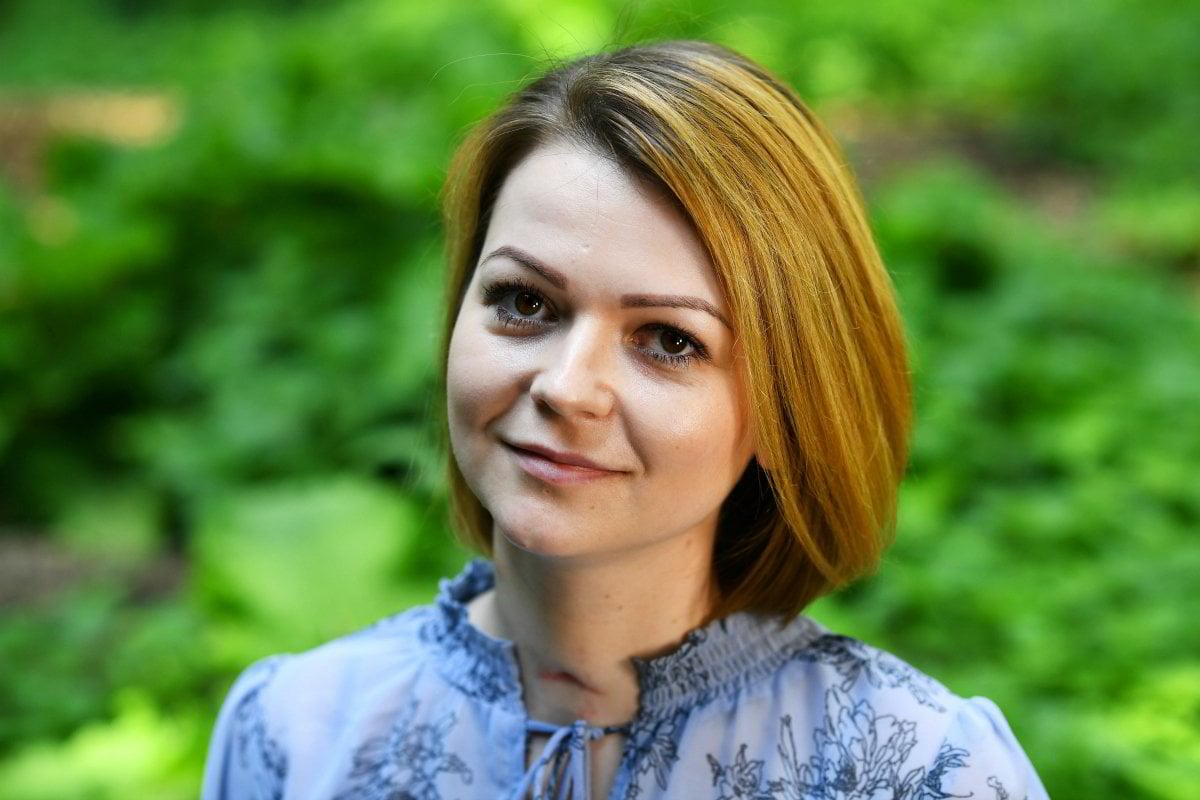 "My pupils were like pinpricks and I was quite sweaty and hot," the father of two later told the BBC. "At the time I put that down to being tired and stressed."

Chills, hallucinations and vomiting followed the next day, and by that lunchtime he was in intensive care. He was ultimately discharged from hospital after two-and-a-half weeks.

Within days of the poisoning, hundreds of police, military personnel, forensic analysts and decontamination experts had swarmed Salisbury. Parts of the city were cordoned off and a contact tracing program was established to identify people who had visited the same venues as the Skripals.

Meanwhile, pressure mounted on the British government to find a culprit, and the finger was quickly pointed at Russia.

"Either this was a direct act by the Russian State against our country," Prime Minister Theresa May told parliament on March 12, "Or the Russian government lost control of this potentially catastrophically damaging nerve agent and allowed it to get into the hands of others."

She gave the Kremlin 36 hours to confirm which was correct, but they refused.

The diplomatic fallout was seismic. In the coming weeks, sanctions were imposed on Russia and two dozen governments, including the US and Australia, expelled more than 100 Russian diplomats from their shores.

The assassins and the perfume bottle.

In July 2018, four months after the Skripals were poisoned, the Novichok claimed yet more victims.

Salisbury woman Dawn Sturgess, 44, died after her partner, Charlie Rowley, gave her a gift of what appeared to be brand-name perfume.

According to reports, he'd found it in a cellophane-wrapped box inside a local charity bin. 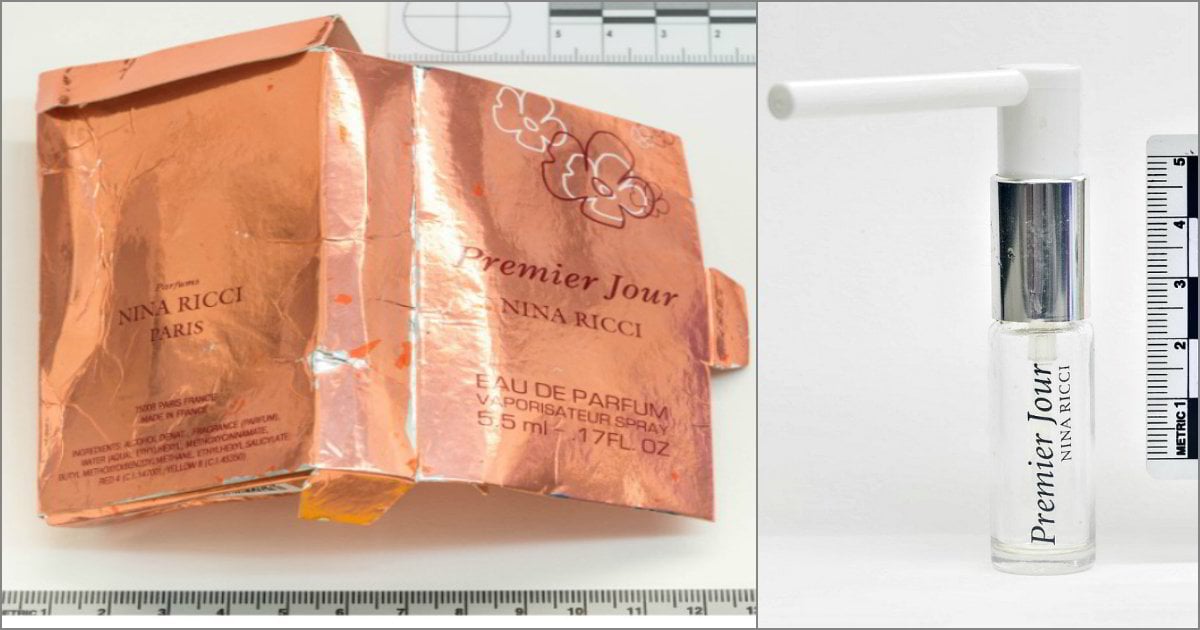 While affixing the spray dispenser to the bottle, Charlie spilled some of the "oily substance" inside over his hands, but he washed it off soon after. The mother of three, however, sprayed it directly onto her wrist.

"Within 15 minutes, I believe, Dawn said she felt she had a headache and asked me if I had any headache tablets. I had a look around the flat and within that time she said she felt peculiar and needed to lie down in the bath, which at the time I thought was a bit strange," Charlie later told ITV.

"I went into the bathroom and found her in the bath, fully clothed, in a very ill state."

Both fell unconscious and were taken to hospital in a critical condition. When Charlie woke weeks later, doctors told him Dawn hadn't survived.

It was ultimately concluded that the bottle, which was in counterfeit designer packaging, had been discarded by the Skripals' would-be assassins after they'd sprayed Sergei's door back in March.

By then police had built a case against two Russian nationals who entered the country under the names Alexander Petrov and Ruslan Boshirov, and were captured on CCTV walking near Sergei Skripal's home the morning of the poisoning. 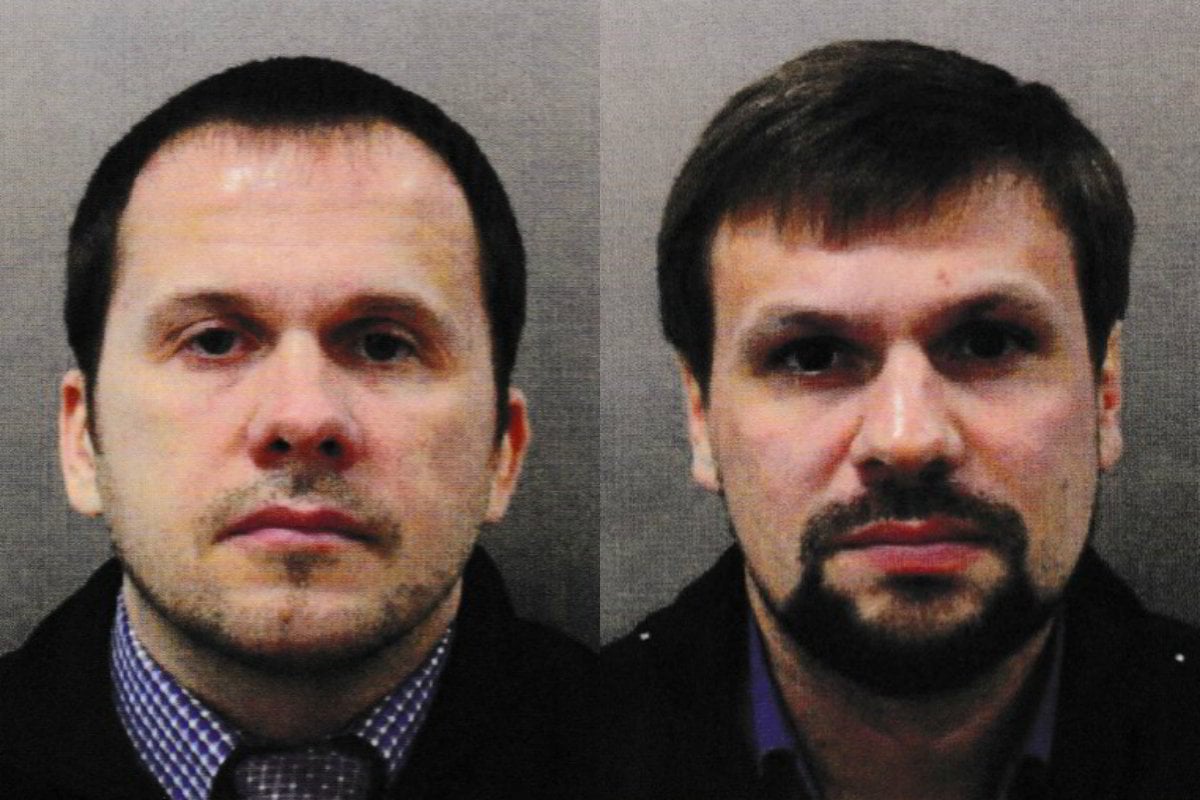 The men had returned to Moscow shortly after, but traces of Novichok were later found in a London hotel room in which they'd stayed during their trip.

A parallel British intelligence investigation concluded that the two men were Russian G.R.U. agents and their names were aliases.

"This was not a rogue operation," Prime Minister May told parliament at the time. "It was almost certainly also approved outside the G.R.U. at a senior level of the Russian state."

British authorities charged the men with attempted murder in September 2018, but Russia does not extradite its citizens for prosecution.

According to The Sunday Times, Yulia and Sergei Skripal are now living in a secure, undisclosed location.

They have not spoken publicly since May 2018, when Yulia gave a televised statement under the watchful eye of her police minders.

"After 20 days in a coma, I woke to the news that we had both been poisoned," she said. "I still find it hard to come to terms that both of us were attacked. We are so lucky to both have survived this attempted assassination."

The Salisbury Poisonings is available to stream on SBS On Demand.

Reply
Upvote
So weird, it all sounds like something out of a cheesy spy movie. Hard to believe this stuff actually goes on for real.
M
mamamia-user-482898552 a year ago

Reply
Upvote
"It can be absorbed through the skin, ingested or inhaled, and works by blocking messages from the nerves to the muscles. It can cause seizures and, at certain doses, paralyses the muscles responsible for breathing and stops the heart. "
Nope. Novichok inhibits acetylcholinesterase,  an enzyme which, under normal circumstances, breaks down the neurotransmitter acetylcholine. When the neurotransmitter doesn't break down normally (because the acetylcholinesterase is inhibited) you get overstimulation (NOT blocking) of the body systems that are driven by acetylcholine. Basically, by removing acetylcholinesterase, you remove the signal that would normally tell the neurons to stop firing.
News
General
Opinion
True Crime
Politics
Sport
Explainer
Entertainment
Celebrity
Reality TV
Movies
TV
Books
Rogue
Royal
Lifestyle
Beauty
Fashion
Weddings
Home
Wellness
Health
Fitness
Travel
Food
Parents
Before The Bump
Pregnancy
Baby
Kids
Teens
School
Parent Opinion
Work & Money
Money
Finance
Career
Lady Startup
Relationships
Sex
Dating
Separation
Friendship
Family
Real Life
Couples