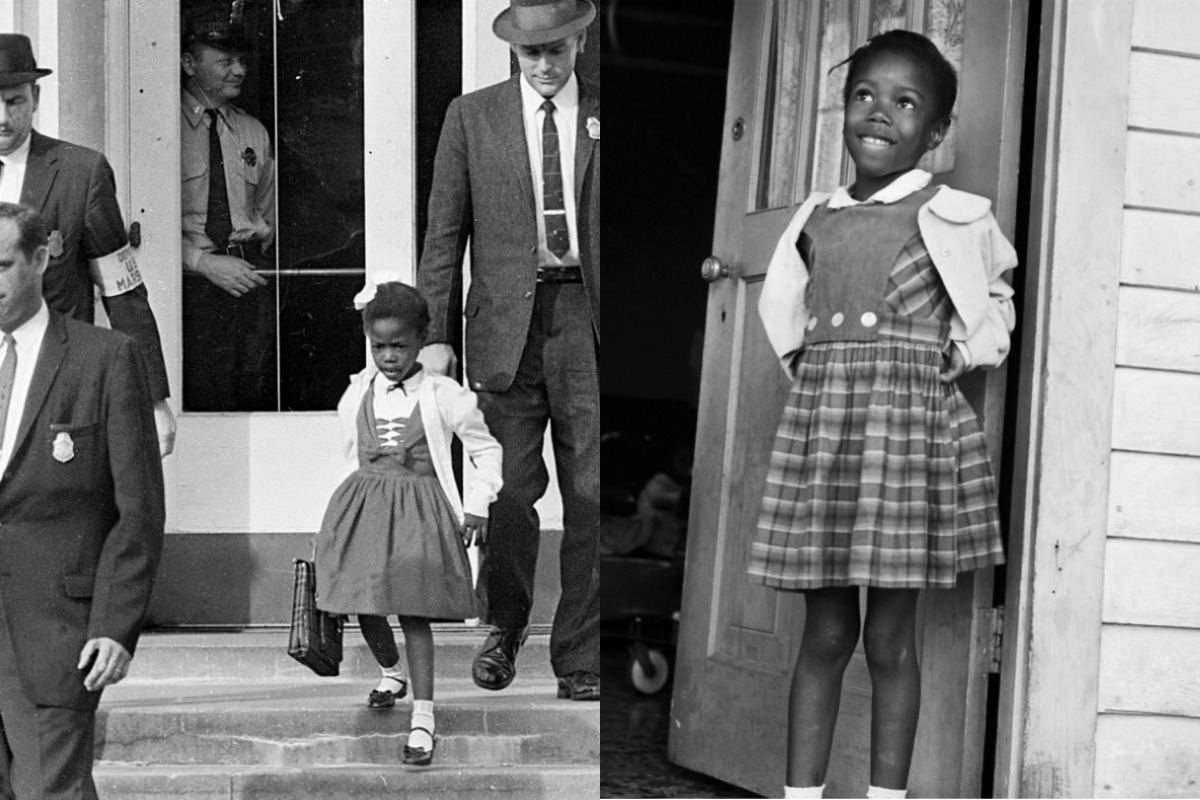 When six-year-old Ruby Bridges walked up and down the steps to her school, she was flanked by white men.

Photos show the small child dressed impeccably on her first day, in a dress and white socks she only learned as an adult were gifted to her family by supporters, as her parents would not have been able to afford them.

She looked stoic as she arrived for a day of education at William Frantz Elementary School in New Orleans, and again when she left, surrounded by men hired to keep her safe.

What the photos of Ruby arriving at school don't show is what awaited her: Angry crowds, which she initially thought - with an innocence only a child could have - were celebrating Mardi Gras.

Imbram X. Kendi, author of How To Be An Antiracist, explains why saying "I'm not racist" isn't enough. Post continues below video.

In reality, they were there to protest the racial integration of schools and the idea that children such as her would be learning at the same institutions as white students.

The slow steps towards integration.

I can still hear the chants 2..4..6...8.. we don't wanta intergrate! My parents kept me focused on school forever grateful. ❤ #Keepthefaith #Rubybridges

Ruby Bridges was born in 1954 in Tylertown, Mississippi. The eldest of five children, Ruby's parents relocated the family to New Orleans, Louisiana, when she was four.

Three months and 22 days before Ruby's birth, the United States Supreme Court ruled the segregation of schools for black students and white students was unconstitutional. Despite this, southern states were resistant to the decision they must integrate for six more years.

Under significant pressure from the federal government, the New Orleans school board agreed to administer an entrance exam to students wanting to attend William Frantz, with the intention of making it difficult enough it would keep black children out of all-white schools for at least a little longer.

While attending a segregated kindergarten, Ruby was chosen as one of the children to take the test. Her father Abon Bridges was hesitant, as he worried about the trouble that could come if she passed and attended a white school, but her mother Lucille Bridges pressed the issue.

Lucille wanted her daughter to get the best possible education, and to "take this step forward ... for all African-American children".

Ruby was one of only six students to pass the test allowing them entry to William Frantz.

Two of the six decided to stay at their current school, and three others were transferred to another school, McDonogh No. 19, and became known as the McDonogh Three. The four of them became the first children to desegregate all-white schools in the south. 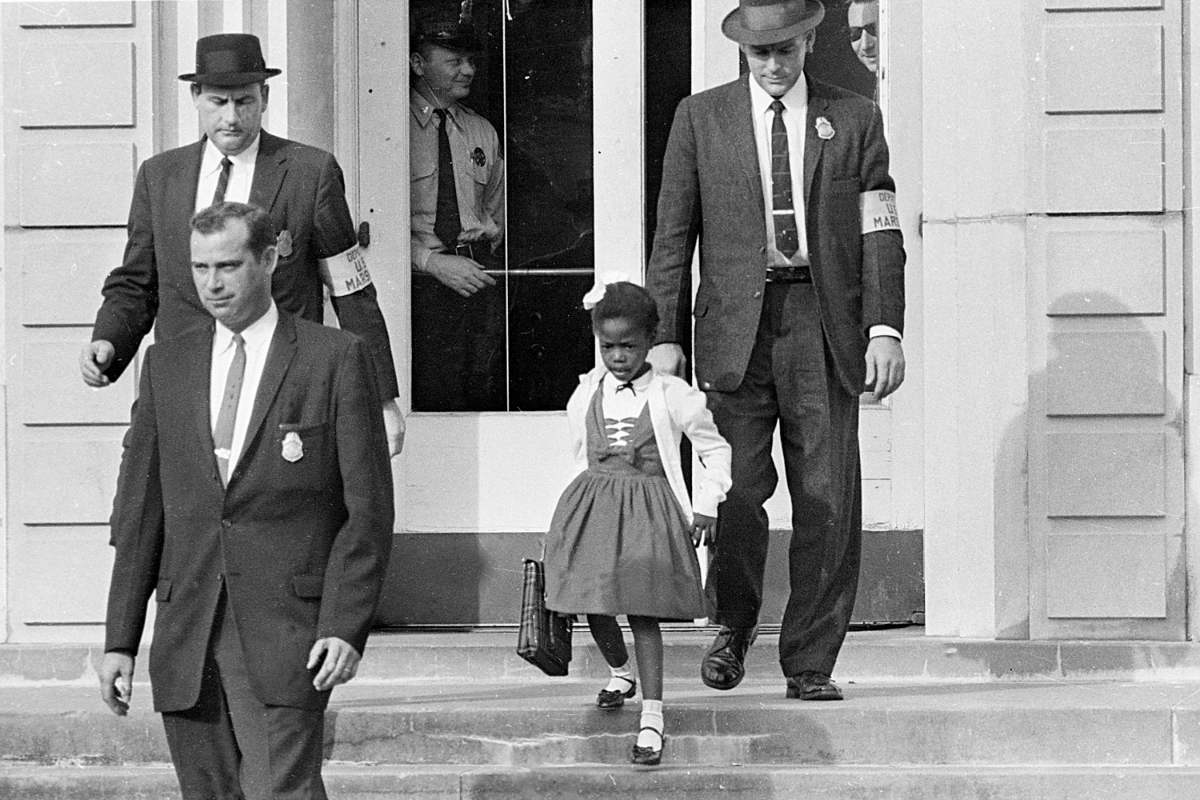 Ruby Bridges walks down the steps of her school, escorted by federal marshals. Image: AAP.

Though the school year begins in September, the Louisiana State Legislature found ways to delay the integration for two months. Finally, on November 14, 1960, Ruby and her mother were driven five blocks to her new school by federal marshals who explained when they arrived at the school, two marshals would walk in front of Ruby and two would be behind her.

The image inspired Norman Rockwell's famous painting The Problem We All Live With, which was featured on the cover of Look magazine in 1964. 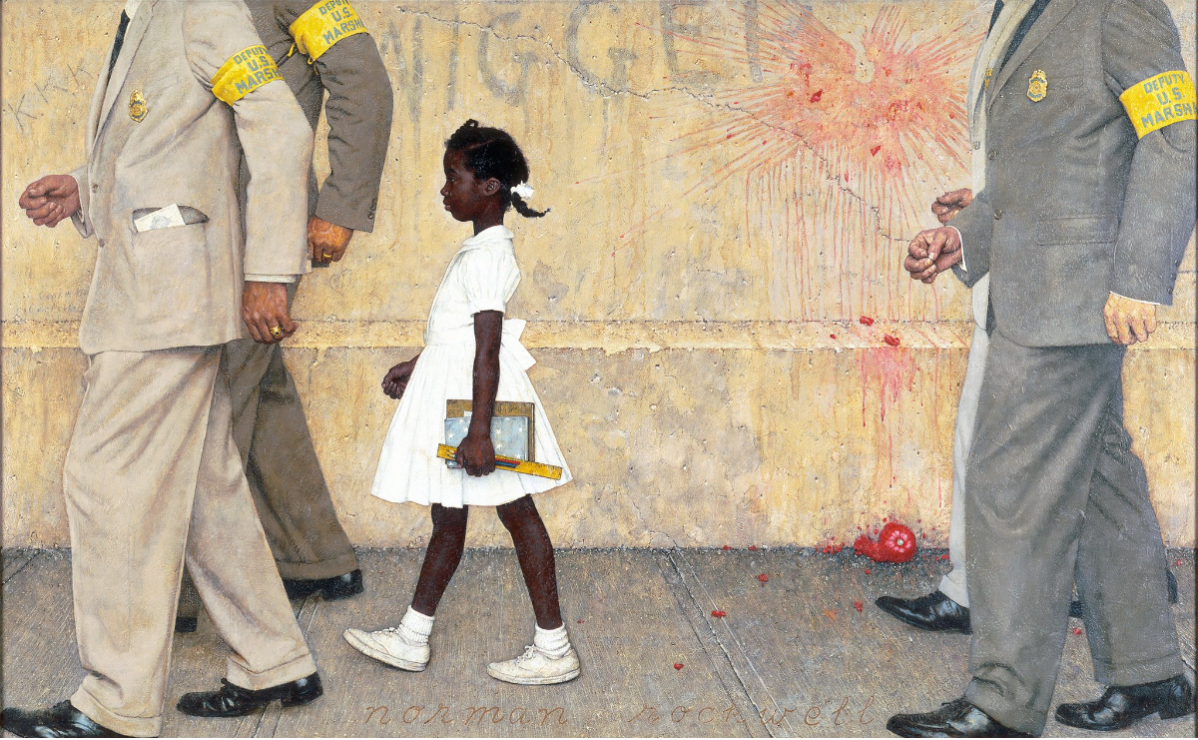 The Problem We All Live With. Image: Normal Rockwell Museum.

Barricades were set up at the school and policemen were present to keep the crowd that had gathered - yelling, waving Confederate flags and throwing objects - in check.

"Driving up I could see the crowd, but living in New Orleans, I actually thought it was Mardi Gras. There was a large crowd of people outside of the school. They were throwing things and shouting, and that sort of goes on in New Orleans at Mardi Gras," Ruby later recalled.

As soon as Ruby entered the school, white parents began pulling their children out. All teachers refused to teach her, except for one; Barbara Henry from Boston, Massachusetts.

For weeks, Ruby would walk the five blocks from her home to William Frantz with her federal escorts.

On her second day of school, a woman threatened to poison her. After this, the marshals only allowed her to eat food brought from home.

'Thank you Charlie for doing what was right at a time when it might not have been the easiest thing to do,' Charles Burks was the only living original Federal Marshall who escorted me into Frantz at age 6. #Keepthefaith

On another day, Ruby was 'greeted' by a woman holding up a black doll in a coffin.

In 2013, Ruby reunited with Charles Burks, then 91 and the last of her marshals still alive.

Burks said escorting Ruby to school was a highlight of his life.

"It was a privilege to be able to do what I did, even though it was one of my duties. Everybody says it was just another job to do, but it was a wonderful job," he said.

He had framed the famous photos showing him and the other marshals with Ruby on the school steps and displayed them proudly in his home.

"Every time I walk down the hall past those pictures, it reminds me of those days. It was something great and dramatic in my life. I tell my grandchildren it was one of the highlights of my life. And I'm glad I was involved."

Each day, Ruby would recall her mother's advice. She would be strong, and pray (sometimes for those in the crowd, too), while entering school. It made things easier. 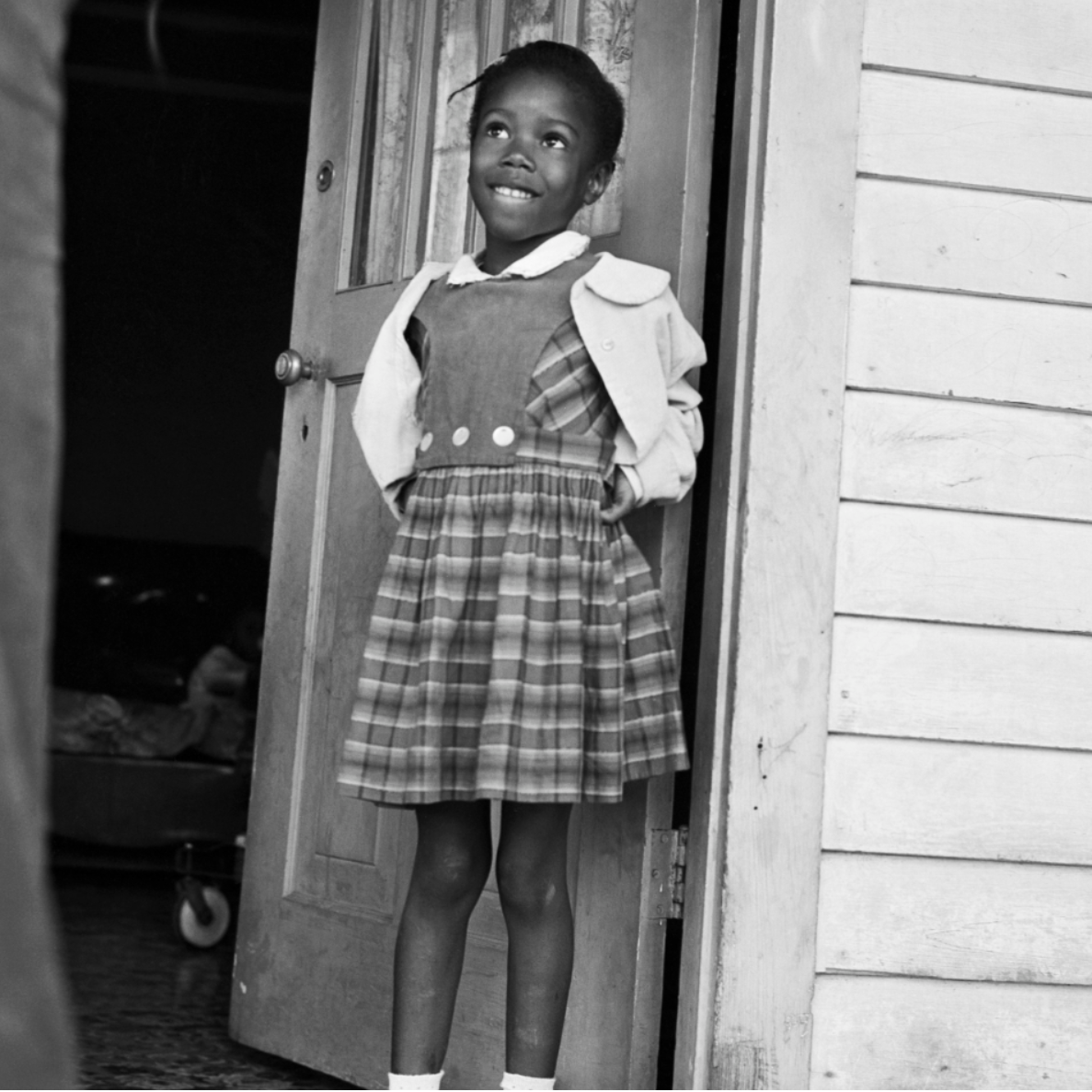 Ruby couldn't go out to the cafeteria or enjoy lunch time with other students, who had slowly begun returning to the school following their initial threats to move to others, and if she needed to use a bathroom, marshals would escort her down the hall.

For the entire school year, Barbara - who Ruby still calls Ms Henry to this day - taught her only student alone, just as if she was teaching an entire class.

Barbara and Ruby reunited decades later on The Oprah Winfrey Show, and in a 2014 article for the Boston Globe, Barbara recalled teaching Ruby.

"We each had hearts free of prejudice. That was the bond that united us and has become indomitable all these many years later," she said.

"Many kids write letters to me expressing their appreciation for my kindness for Ruby. That's so powerful for teachers to realise - how quickly children absorb the attitude of their teacher: the caring, sensitivity, and sense of worth and respect. The ripples are endless. To make a difference in a person's life and to shape their awareness and caring for other people - what can be better than that?" 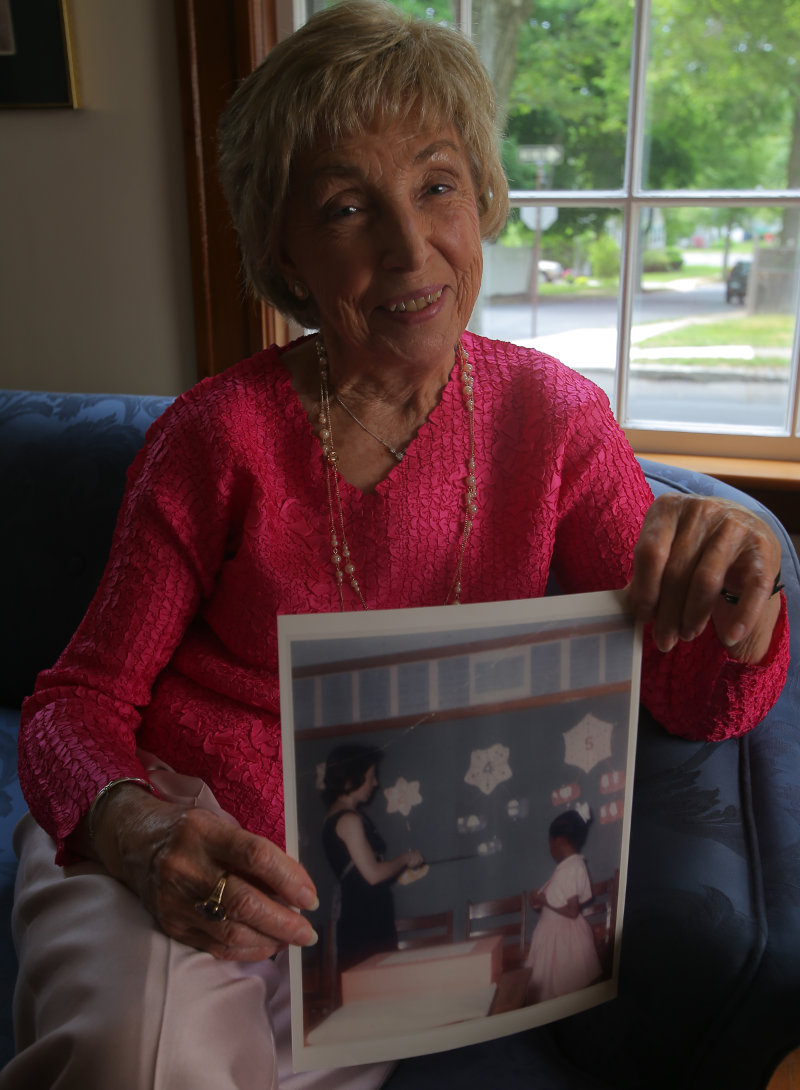 Barbara Henry in 2014, with a photo of her and Ruby Bridges in school. Image: Getty.

Her father lost his job at a gas station, and her grandparents in Mississippi were sent off the land they had sharecropped for more than 25 years. The grocery store where the family usually shopped banned them from entering, and her parents separated.

Gradually, as the year went on, things began to get easier.

The protests and civil disobedience began to subside over time, and neighbours and others in the community began to step up and offer help.

A neighbour provided her father with a new job, while others volunteered to babysit the four other Bridges children, watch the house as protectors, and walk behind the federal marshals on their trips with Ruby to school. 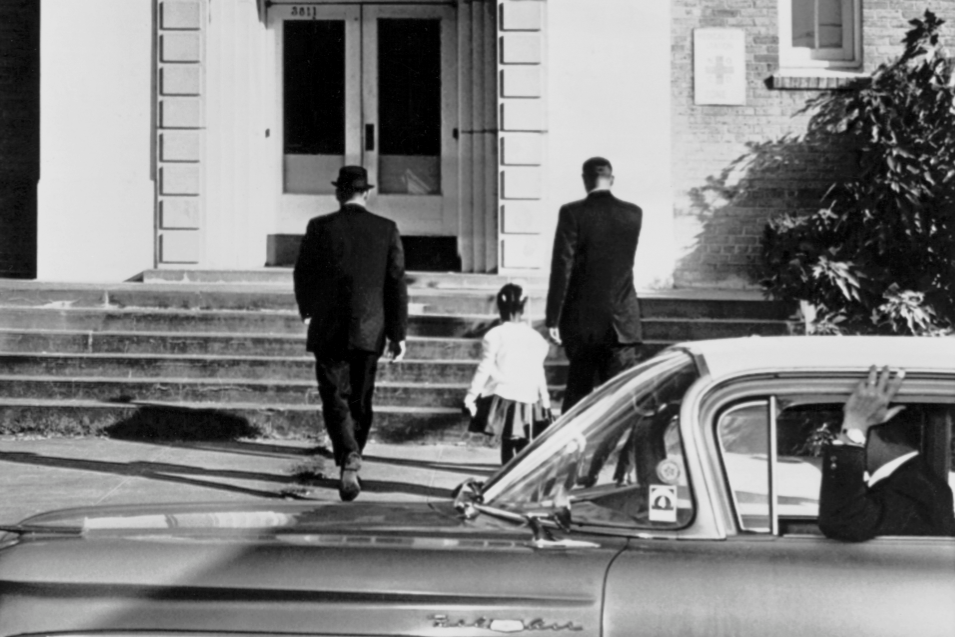 After a couple of months at William Frantz, Ruby began experiencing nightmares.

She also stopped eating her lunch, which she had been eating alone, for a while, hiding her sandwiches from home in a storage cabinet. After a cleaner found them, Barbara began eating lunch with Ruby each day.

She began to see psychologist Dr Robert Coles, who volunteered due to his concern about how young Ruby would handle the pressure and isolation. Years later, an adult Ruby learned the fancy clothes she wore in those first few weeks of school had been gifted to her family by a relative of Dr Coles.

Late in the school year, Barbara learned four others in Ruby's year group had been coming to the school and being taught separately, and she demanded they be taught together.

"By law, you have to integrate this school. Integration means putting black and white children in the same classroom. As I see it, you are breaking the law by keeping them separate," she told the principal, who then allowed the other students to come into Barbara's class for a time each day; small progress.

It was during an interaction with these students that Ruby finally understood what was going on.

"I still knew nothing about racism or integration," Ruby wrote in her book Through My Eyes. "I had picked up bits and pieces over the months from being around adults and hearing them talk, but nothing was clear to me. The light dawned one day when a little white boy refused to play with me."

"'I can't play with you,' the boy said. 'My mama said not to because you're a ******'. At that moment, it all made sense to me. I finally realised that everything had happened because I was black. I remember feeling a little stunned. It was all about the colour of my skin." 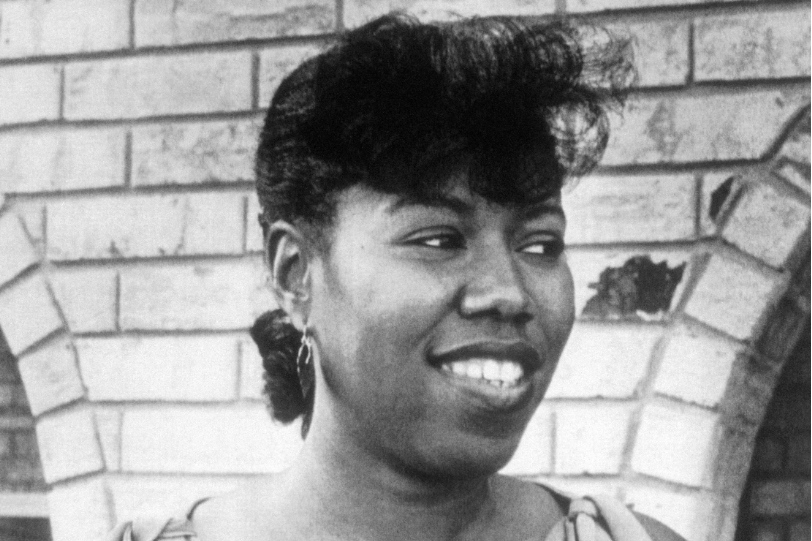 After the summer, when Ruby returned for her second year at the school, things were different.

Barbara's contract had not been renewed, so she had returned to Boston. There were other students in Ruby's classroom, and no more federal marshals to escort her. Ruby walked herself to school each morning.

It was as if the previous year had not happened. Nobody talked about it, and everyone at William Frantz just got on with school as normal.

The legacy of Ruby Bridges. 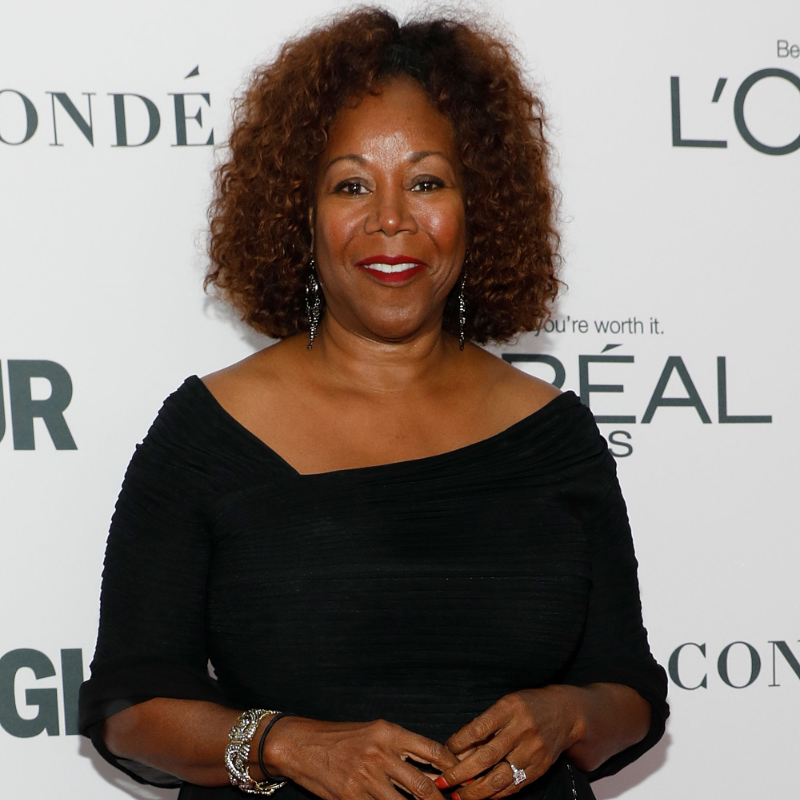 Ruby finished her grade schooling at Williams Frantz and eventually graduated from the integrated Francis T. Nicholls High School. She studied travel and tourism at the Kansas City business school and worked as a travel agent.

In 1984, Ruby married Malcolm Hall. Now 65, she still lives in New Orleans where she is a mother to four sons, an activist and chair of the Ruby Bridges Foundation, which she formed in 1999 to promote "tolerance, respect and appreciation of all differences".

"Racism is a grown up disease and we must stop using our children to spread it," is the foundation's mission statement.

Ruby tours schools sharing her story, and 40 years after her first year of school, Ruby became an honorary deputy marshal in 2000.

In a ceremony at the Corcoran Gallery of Art, Former Deputy Attorney General Eric Holder said Ruby's steps were "were a giant leap forward for this nation".

"Her brave act gave many a sense of equality," he said.

Initially unwanted at the institution because of the colour of her skin, Ruby's legacy is now immortalised at William Frantz Elementary School with a statue in its courtyard and a legacy of love and tolerance.