Meghan Markle and Prince Harry’s wedding day has came and passed and so has the wedding of Princess Eugenie and Jack Brooksbank.

But that’s not to say that we’re not still craving royal wedding photos.

To quench your royal wedding thirst, we painstakingly compiled 49 stunning photos of almost every royal wedding dress from the last 178 years to peruse while you wait.

From Grace Kelly and Princess Margaret to Queen Victoria and Queen Elizabeth, here are the stories behind their iconic wedding dresses.

These should tide you over until we’re blessed with the next royal wedding. Queen Victoria is said to have popularised the white wedding dress, as women of the time had worn varying colours up until her marriage to Prince Albert at St James's Palace in London on February 10th, 1840.

Vogue reports Victoria chose to have her dress made in white not to reflect purity, but to best show off its lace. The publication also said the young queen forbid anyone else from wearing white to her wedding, and had the pattern for her dress destroyed afterwards so no one could copy it.

The lady knew what she wanted. As the wedding fell during the period of mourning for Queen Victoria's husband Prince Albert, a strict dress code of grey, lilac or mauve was enforced. Victoria wore all black for the occasion. The only exception was the bride, who wore an ivory silk taffeta gown designed by London designer Mrs. James. Queen Mary's wedding dress was designed by London-based designers Lingon and Curtis, and was trimmed with ostrich feathers and orange blossoms. Wallis Simpson and the Duke of Windsor, 1937 Wallis Simpson and Prince Edward, Duke of Windsor married on June 3, 1937 at the Château de Candé in France, several months after Edward abdicated the British throne.

According to Harper's Bazaar, The Duchess wore a Mainbocher creation which is now held in the Metropolitan Museum of Art.

Queen Elizabeth II and the Duke of Edinburgh, 1947 A then-Princess Elizabeth and Prince Phillip Mountbatten married at Westminster Abbey on November 20, 1947.

Norman Hartnell designed The Queen's wedding dress - it was an ivory satin gown covered with pearl embroidery in a floral design. Kelly wore a gown by MGM costumer Helen Rose, who had dressed her for her films High Society and The Swan. The wedding dress was designed by Norman Hartnell, the favoured couturier of the royals, and was made from silk organza. Princess Anne Marie of Denmark and King Constantine II of Greece were married on September 18, 1964 in the Metropolitan Cathedral of the Annunciation in Athens.

Anne's wedding dress was designed by Danish designer, Jørgen Bender and featured a wide neckline, empire waist, and three-quarter sleeves, with a split-front skirt with a detailed edge, extending out into a 20-foot train.

Queen Beatrix of the Netherlands and Claus von Amsberg, 1966 Princess Beatrix of the Netherlands and Claus von Amsberg were married on March 10, 1966 in a civil ceremony at the City Hall in Amsterdam. Caroline's wedding dress was a Christian Dior gown designed by Marc Bohan. She wore a flower crown in place of a tiara. An estimated 500 million people watched the televised wedding of Princess Anne and Captain Mark Phillips at Westminster Cathedral on November 14, 1973. Princess Diana and Prince Charles of Wales were married on July 29, 1981 at St Paul's Cathedral in London. 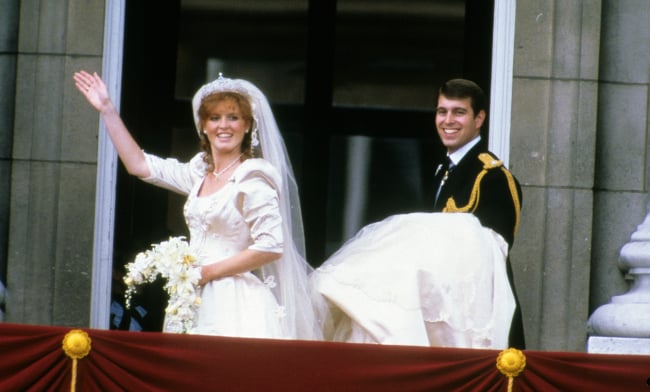 Prince Abdullah and Queen Rania of Jordan were married on June 10, 1993 just five months after they met. The wedding of Princess Marie-Chantel and Prince Pavlos of Greece took place on July 1, 1995 at St Sophia's Cathedral in London.

Marie-Chantel wore a pearl-encrusted silk Valentino wedding gown, which reportedly had a four-and-a-half-metre Chantilly lace train. The dress cost $225,000 and was made by 25 people. Prince Frederik married Australia's Mary Donaldson at Copenhagen Cathedral, Denmark on May 14, 2004 after meeting at the 2000 Sydney Olympics.

Princess Mary wore a dress by Uffe Frank with a veil first used by Crown Princess Margaret of Sweden in 1905.

The Prince of Wales and Camilla Parker Bowles, 2005

Charles, Prince of Wales and Camilla Parker Bowles were married in a civil ceremony at Windsor Guildhall on April 9, 2005.

Camilla's wedding dress was an embellished blue and gold damask coat by Robinson Valentine. It featured gold embroidery around the neckline and was worn over a chiffon dress. Princess Victoria's wedding dress was designed by Pär Engsheden - a satin gown featuring a five-metre train and off-the-shoulder boat neck. She wore a crown of cameos which her mother, Queen Silvia, wore during her own wedding. The wedding of Prince William and Kate Middleton took place on April 29, 2011 at Westminster Abbey in London.

Kate wore an Alexander McQueen lace, long-sleeve wedding dress. The designers who worked on her dress' embroidery had to wash their hands every 30 minutes to preserve its pristine condition. Albert II, Prince of Monaco married Charlene Wittstock over July 1 and 2, 2011 at the Prince's Palace of Monaco - it was described as Monaco's "biggest party in 55 years".

Zara Phillips wore an ivory silk satin gown by Stewart Parvin and a tiara given to her by her mother, Princess Anne. She wore an Ida Sjöstedt dress featuring handmade lace from Jose Maria Ruiz, paired with a tiara gifted to her by in-laws King Carl XVI Gustaf and Queen Silvia.

The dress was designed by Peta Pilotto, with shoes by Charlotte Olympia. She wore a stunning tiara, borrowed from Queen Elizabeth II.

I reckon Meghan's more likely to go for something sleek like Princess Charlene. I can see her wanting to distance herself from the Duchess of Cambridge's gown.

As an aside, I think it was the Iranian Queen whose dress was so heavy a bunch of people hacked off half the train before the ceremony. She'd been unwell and could barely stand under the weight of the gown.

Given that this is not her first rodeo, I don't see her doing the whole big white meringue gown thing this time around. Would seem a bit incongruous if she did.

I don't know what Meghan's first wedding was like but lots of women still do the big meringue thing for a second wedding, particularly if their first was done on the cheap or just very low-key.

I doubt it would be considered in good taste to do so in royal circles - unlike "most women", she has protocol and public scrutiny to consider - it's not just a day for her to play princess dress ups, even if she missed out last wedding.

What great photos! Two in particular stood out for me. The Queen Mother giving the nod to the flapper style of the 20s and the photo of Queen Mary. She was an old harridan in her later years but I didn't realise she was always like that. By the miserable look on her face, you'd think she was at a funeral!

In fairness to Queen Mary, they did have to keep still for a while for the photos back then. Plus, she was originally engaged to George's elder brother, who died, so maybe she'd been thinking about that.

But yeah, she totally looked like a tough old broad in later years!

By all accounts she ruled her family with a rod of iron. I remember as a kid and young adult hearing and reading about Queen Mary having her say on various topics. She was probably more Victorian than Victoria if that's possible! Lol.