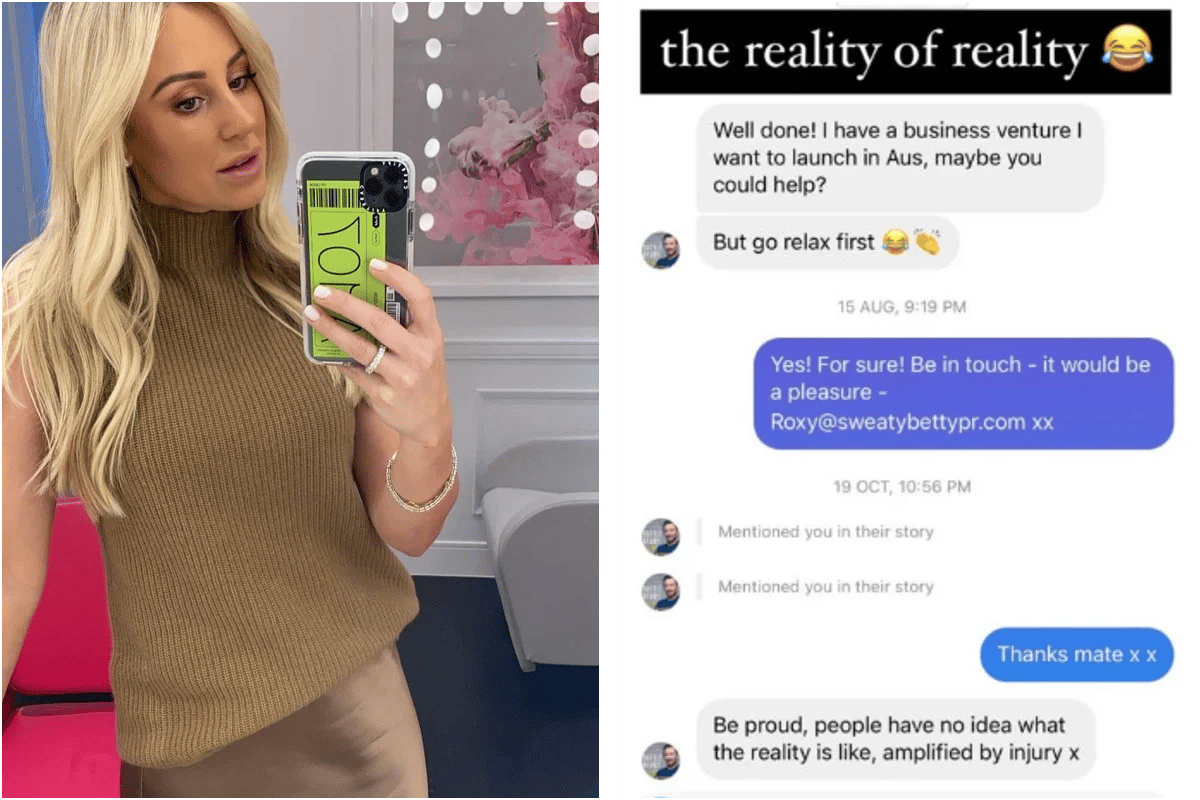 1. Roxy Jacenko is serving up receipts after an SAS Australia instructor bad mouthed her.

Roxy Jacenko has served up the receipts from her DMs with SAS Australia instructor, Ollie Ollerton, after he called her the most disappointing SAS contestant last week, and this is really awkward for him...

Last week, Ollie Ollerton told news.com.au that he was let down by Roxy Jacenko in SAS Australia saying: "Roxy (Jacenko) was horrendous from the outset."

But of course, Roxy was quick to respond and if ever there was a lesson to not badmouth a PR expert, it's this.

The 40-year-old shared a screenshot of the pairs private messages on her Instagram story that outed Ollie as sympathising with Roxy as leaving for fair reasons. 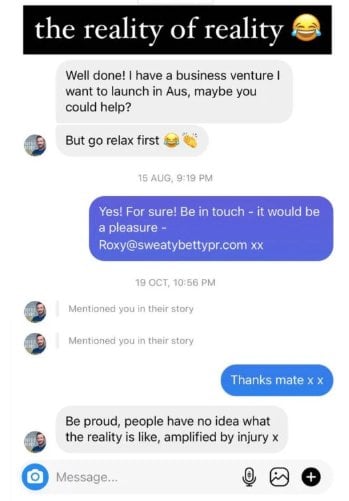 In the message, Ollerton writes: "Be proud, people have no idea what the reality is like, amplified by injury x," and I suppose he wasn't expecting to see these leaked...

2. One of the Bachelorette boys went ROGUE by talking about the chaotic behind-the-scenes of the show.

Another week, another dose of Bachelorette gossip has dropped.

This time, an unnamed contestant has spilled the tea about what filming the show is really like on the So Dramatic! podcast. And things don't sound that rosy behind the scenes.

In fact, the contestant went so far as to describe this year's season as "budget Bachie", claiming everything felt rushed and last minute.

"Everything was rushed and the boys only got a call up one week before filming to let them know that they had been cast for the show. They hadn't confirmed anyone because they weren't sure what was happening with COVID-19," the contestant told host Megan Pustetto.

But that wasn't all. "The choice in girls, the dates, the filming set-up [and] the cocktail parties" were also apparently rushed.

"It felt like they pulled everything together at the last minute. You do one group date, that then turns into a second date, then you film the rose ceremony that night."

The contestant also claimed that they boys barely had anytime with Elly and Becky.

"It was such a joke, they starve you of time with the girls. I personally was there for four weeks and I only spent about 25 minutes with both of the girls in total."

Oh, and they also weighed in on fellow contestant Joe, who they claimed was asked to join the show.

"They were so desperate for contestants that they asked Elly who she wanted on the show, and she requested Joe."

The Bachelorette continues Wednesday at 7:30pm on Channel 10.

3. So Elly and Frazer have been sneaking off to make out at every cocktail party.

In more Bachie goss, it seems Elly and Frazer have been having some sneaky catch ups on The Bachelorette.

According to the So Dramatic! podcast "Elly and Frazer were caught on many occasions sneaking off into a private room to hook up".

An unnamed contestant told host Megan Pustetto, "No one really kissed the girls in front of the boys at the cocktail parties, we had an agreement that we wouldn’t do that. But we later found out that Frazer had broken the bro code and secretly gone off to a private room in the mansion with Elly on a number of occasions during the cocktail parties to hook up with her in private."

The other contestants apparently didn't know about the catch ups until the end of the season when Frazer reportedly "admitted it to a few of the final boys."

The contestant also claimed that there were some issues involving Elly, Frazer and his ex-girlfriend which weren't shown on screen.

"Frazer told the boys about the relationship in the mansion, Elly found out about it because one of the boys mentioned that Frazer had been discussing his ex girlfriend all the time. She became extremely insecure, and they had a number of arguments about it."

Elly apparently "felt threatened" and was worried Frazer "might not be over her yet, if he was still talking about her to the other boys".

4. Taite Radley says he was ‘blindsided’ by Ali going on SAS Australia.

But according to Taite, Ali's comments come as a bit of surprise.

"It would have been nice to hear it from her," he told the Daily Mail earlier today, claiming that he only heard about Ali's emotional interrogation this morning.

"She hasn't spoken to me about anything since she left."

The 29-year-old went on to say that while it hurts seeing Ali upset she's at the point where's she's trying to find herself.

"I guess I have to wait and see what's on tonight. I think she is in a stage of her life where she is really finding herself truly."

"She's not trying to be someone for someone she's with to make them happy, she's just trying to find her true self. When she does find that, the right person will come along and I wish her nothing but happiness. It obviously hurts seeing her so upset but I know it's just part of her journey."

The pair announced their split back in July after two years together.

5. "Been missing you..." The beginning of Zoë Foster Blake and Hamish Blake's love story.

Zoë Foster Blake was in the beauty cupboard at Cosmopolitan when a book fell on her head.

Like something lifted from the script of an early 2000s rom-com, the swan-diving book was a self-help title filled with precisely the guidance she needed at that moment in her life.

It was called The Rules: Time-Tested Secrets for Capturing the Heart of Mr. Right.

"It's a bit of a hideous book, I suppose," Foster Blake told Mamamia's No Filter podcast.

"Basically, it's this idea of 'let them chase you. Think of yourself as a prize, and then everyone wins because someone feels like they won you and you feel like [you get to be with] someone that really wants you.'

"It helped me with my self-worth and self-esteem at a time when it was really low. So I think, sometimes, you just look for validation anywhere. And that for me was that [book]; it gave me the strength I needed at that point."

She was Zoë Foster then; a young beauty editor in the heady 2000s heyday of glossy magazines; a woman who spent the first decade of her adult life dating NRL star Craig Wing.

They'd met at 18 in a nightclub where she was working as a cigarette promo girl, broken up at age 23 for a little over a year, then were back together until 29.

Particularly in the first phase, Foster Blake imagined marrying Wing: "I was just assuming that that would be the way it would roll. Even though I think in my heart, I knew that I probably wouldn't be that happy."

The man who would ultimately make her so was already in her life.