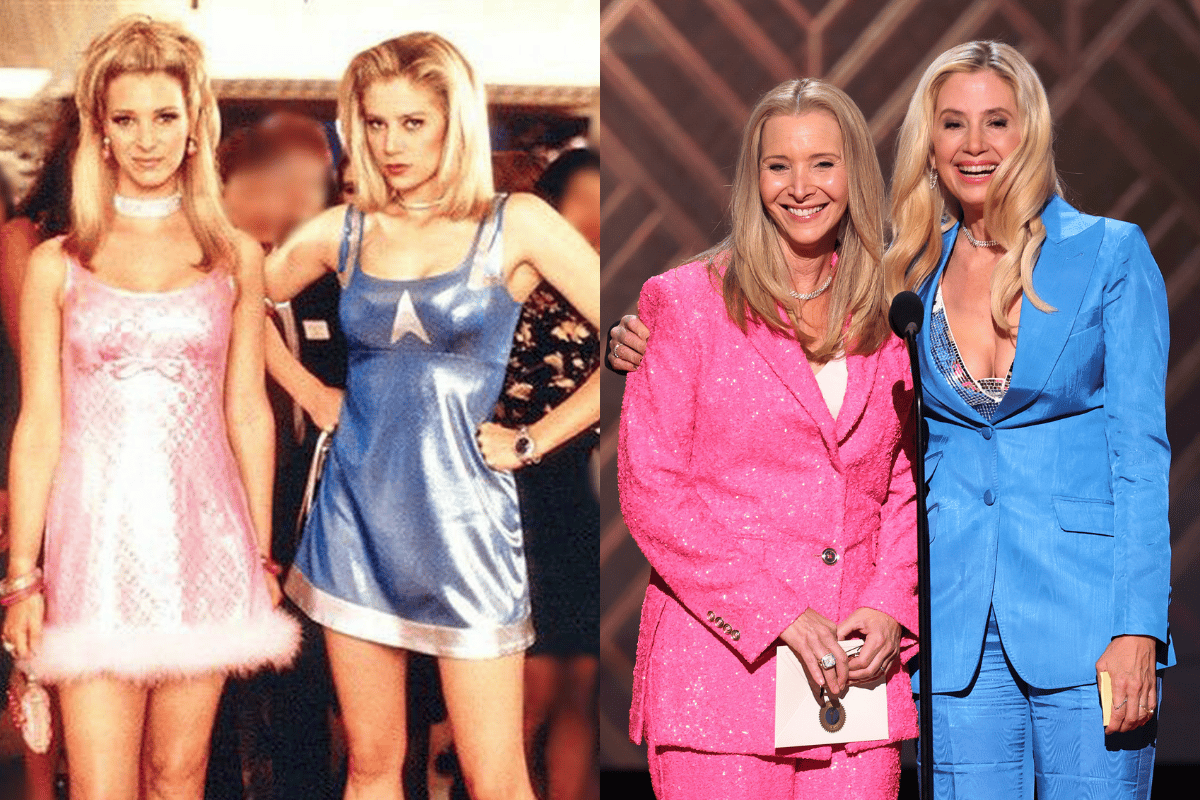 It's been 25 years since the cult classic film Romy and Michele’s High School Reunion first blessed the world in 1997, but it remains as relevant a tale of friendship and self-acceptance, just as it did back then.

The movie tells the story of best friends Romy (Mira Sorvino) and Michele (Lisa Kudrow), who decide to leave their Los Angeles lives to head home to Tucson for their 10-year high school reunion. Feeling that they haven’t achieved what they wanted to in the decade, and wanting to show-off to their former bullies, they decide to fake their car, clothes, and careers – even claiming that they invented Post-It notes.

Naturally, their lies are discovered. But with the help of a couple of satin mini-dresses, they discover what really matters – accepting and celebrating themselves.

And this week, Mira Sorvino and Lisa Kudrow reunited to present at the 28th Annual Screen Actors Guild Awards on Sunday to present Apple+'s Tad Lasso with the SAG for Outstanding Ensemble in comedy series.

The pair recreated their iconic looks from over 25 years ago, with Sorvino in blue and Kudrow in pink.

While this time, we didn't get an interpretive dance, we did get to see as the duo stepped out on stage while Cyndi Lauper's 'Time After Time' blared through the speakers.

"You look cute," Sorvino expressed in the style of the iconic Romy. Kudrow replied: "I know, thanks. So do you, of course. Do you think this is the cutest anyone's ever looked an awards show?"

Kudrow went on to say: "You are so right. You are so right, and these cast ensembles are so hilarious. And you knew that ensemble had two meanings. Okay, you are a genius."

Their heartfelt and lively reunion was what we all needed at the beginning of 2022. But it did get us thinking: Yes, RAMHR is a heart-warming ending with life lessons aplenty.

But did it help the main cast achieve their own successes afterwards?

We like to think so. Here's what the cast is up to now.

Romy White may not have initially been living the life she wanted, but Sorvino went on the achieve amazing things after RAMHR.

The now 54-year-old starred in the 2006 film Human Trafficking, which earned her a Golden Globe nomination. Her other movies include Mimic and Summer of Sam.

In 2019, she had a role on Ryan Murphy's Netflix series Hollywood.

Her latest role is on the Starz series, Shining Vale, where she stars alongside Courtney Cox.

During the filming of RAMHR, the actor was dating director Quentin Tarantino. They split the year after the movie was released.

Sorvino has been married to actor Christopher Backus since 2004, and has four children.

Sorvino was also a U.N. Goodwill Ambassador to Combat Human Trafficking, from 2009 to 2012.

In 2017, during the #MeToo movement, Sorvino revealed the sexual harassment she suffered from producer Harvey Weinstein, adding that the director had blacklisted her after their encounter.

As if being the iconic Michele wasn’t enough, Kudrow was also one of our most-loved 90s characters – Phoebe Buffay from Friends.

The now 58-year-old continued that role until the series end in 2004. Since then, she hasn’t stopped being a Hollywood A-lister. She’s continued to not only act extensively but also write and produce, winning Emmys for 2005’s The Comeback, and appearing in numerous movies, including The Opposite of Sex, P.S. I Love You, and Hotel for Dogs.

When she filmed RAMHR, Kudrow was already married to advertising executive Michael Stern. The couple had a son, Julian, a year after the movie was released – you may recall her pregnancy was written into the storyline of Friends when Phoebe acted as her brother’s surrogate.

And of course, Kudrow still has some very famous friends.

If you didn't notice 2020 was definitely the year of Kudrow on Netflix: She guest-starred in the penultimate episode of the Good Place, in comedy-drama Feel Good and as Steve Carell's husband in Space Force.

Oh, and there was that upcoming Friends reunion too.

Comedian Janeane Garofalo's character Heather Mooney was the hilarious, truth-telling force in RAMHR, and her career after the film has been similar.

The now 57-year-old, who had also been in 1994’s Reality Bites, continued to tour her live comedy shows, as well as developing her movie career.

In 2021, she appeared alongside Kelsey Grammar and Julia Stiles in the drama film The God Committee, which was delayed by the COVID-19 pandemic.

In 2003, Garafalo spoke out against the Iraq War, and has been a regular social justice advocate for other causes.

On a personal note, since RAMHR, the comedian also divorced writer Robert Cohen in 2012; they had married in 1991.

In 2015, she found love again with husband Brody Tate. The pair have endeavoured to remain incredibly private about any details concerning their relationship.

Christie Masters was Romy and Michele’s nemesis, but that didn’t mean Julie Campbell, who played her, was anything like her unfulfilled character.

Campbell, now 59, went on to have an extensive television career, appearing in shows such as Ally McBeal, Malcolm in the Middle, Friends, Scrubs, House, and The Mentalist.

You might most also recognise her as the terrified wife of John Lithgow's Trinity Killer on the fourth season of Dexter.

Justin Theroux as Clarence the Cowboy.

Years before Justin Theroux married, and then divorced, Jennifer Aniston, the now 50-year-old had a small role in RAMHR as the cowboy Clarence. It was only his second movie role, having first appeared in I Shot Andy Warhol.

It was his role in the 2014 – 2017 psychological drama, The Leftovers, that made him a household name. That, and becoming Mr Jennifer Aniston in 2015, of course.

Do you remember watching this film? What did you think? Tell us in a comment below.

I rewatched this a couple of months back.
It has not held up well!

I'm a fan of all of them as actors, but this is not their high point!