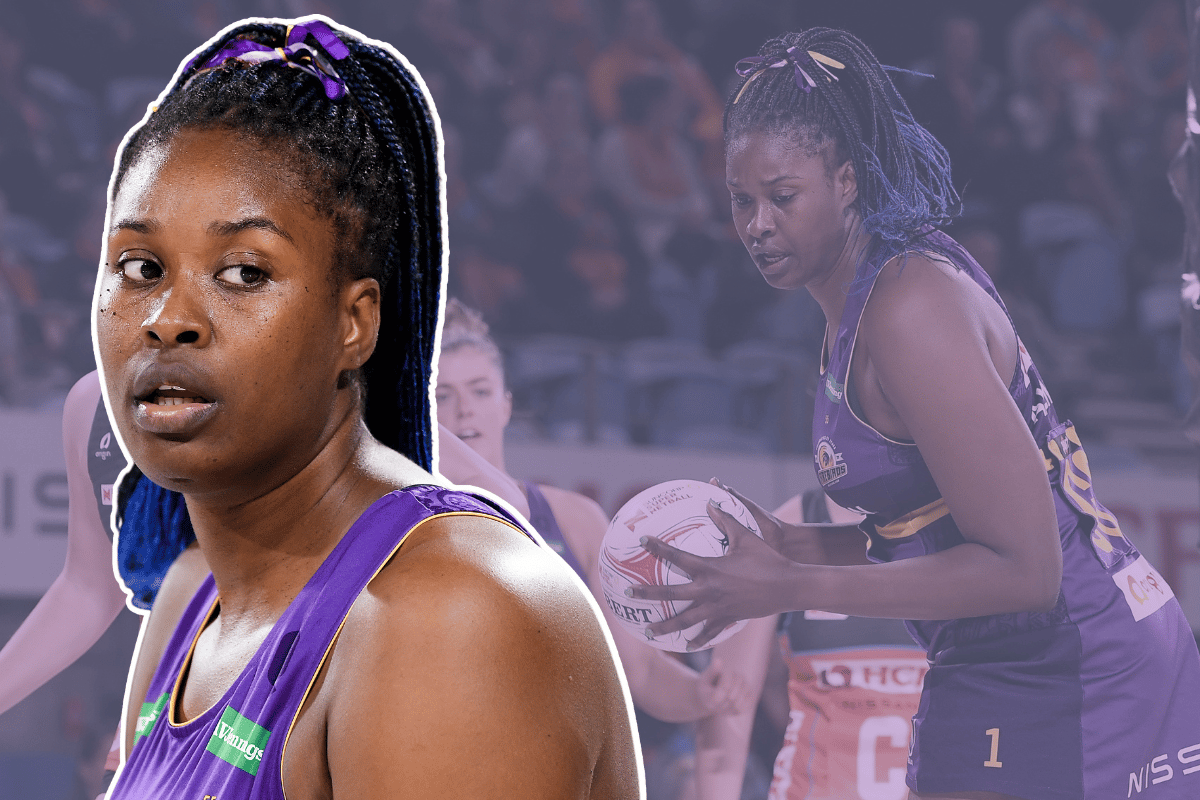 The 33-year-old, who is pregnant with her first child, was looking forward to returning to her team, the Queensland Firebirds, next year and ticking off the achievement.

It would be just another accolade to her name, having helped the Firebirds win three premierships, taken home multiple MVP awards and claimed the record for the most goals scored by an individual in a grand final.

But on Monday, Aiken-George announced her Super Netball contract had not been renewed as the Firebirds deemed it "too risky" for her to make a return next season.

"Okay, so a lot of people has (sic) been asking if I'll be playing for the firebirds next season, the answer is 'NO'," she shared on Instagram.

"And that decision was not made by me, it was by the club."

"'Too risky they say.' So I will NOT be in the FIREBIRDS next season."

Aiken-George announced her pregnancy in February, opting not to play the 2022 season - which would have been her 15th year with the club - after battling with morning sickness and COVID-19.

After sharing she will not be re-joining the team, fellow netball players have come out in support of Aiken-George.

"Romelda has made that club what it is today and has almost single-handedly won premierships for that club," she continued.

"What a way to support a loyal player, who was 1000% poached by EVERY club in the world!"

Romelda has made that club what it is today and has almost single handedly won premierships for that club.

What a way to support a loyal player, who was 1000% poached by EVERY club in the world! https://t.co/90hXmP2WGy

"I actually can’t believe I am reading this. It broke me when I read it on her socials," she wrote.

I actually can’t believe I am reading this. It broke me when I read it on her socials.
Seriously fuming 😡

The governing body, in agreement with the Australian Cricketers' Association, introduced 12 months paid maternity leave three years ago, to support female players through pregnancy, adoption and their return to the sport.

👉 12 months of paid leave for players who are expecting/adopting

CA announce parental policy for all players who have state, national or Big Bash contracts:https://t.co/Rr9ZYMW8ti

"Sadly, it doesn’t surprise me, either, and I’m sick of saying that, but some of the things our sport does to its female athletes just continually keep happening, and they’re not right," the ex-Diamond player told the publication.

"Netball just needs to do a lot more. Netball Australia keeps on trying to say that we’re the premier female sport, yet we don’t actually properly support our female athletes, because one of the things of being a female is that a lot of us have babies, but you become a liability most of the time by doing it.

"To think that then ends your career, at what should be one of the happiest and most exciting times of your life… You would assume it might be pretty hard for Romelda to now get a contract anywhere, and for me it just doesn’t seem right."

How the Queensland Firebirds have responded.

Following the backlash, the Firebirds first issued a statement saying the playing roster for 2023 was incomplete and they were awaiting the appointment of a replacement coach for Megan Anderson.

"The Queensland Firebirds 2023 playing roster is incomplete, with the club shortly set to name a new Head Coach, and the remaining three contracted players, plus training partners still to be confirmed."

The @FirebirdsQld have issued a statement in response to the news surrounding Romelda Aiken-George today.

They later issued a second statement, claiming their decision not to offer Aiken-George a Super Netball contract was not influenced by her pregnancy, but rather based on high-performance reasons.

"In the face of some still implying that the Firebirds club makes list management decisions based on anything other than high-performance related factors, the club unequivocally denies that Romelda Aiken-George was not offered a contract in the 10 because she is pregnant," they said.

"The Firebirds have developed a strong club culture over many seasons that embraces and supports life decisions of players, and suggestions that the club operates otherwise is not fair on the current and former playing group and management."

Reply
Upvote
1 upvotes
Participation in sport at an elite level is, necessarily, purely performance based, not sure how this industry is going to re-integrate athletes who've taken a year off and have lost the edge that continuous competition at the top level confers.
Nor, do I think it's fair on female athletes who are sitting in the wings who haven't taken the decision to get pregnant.
Big supporter of maternity leave in all industries, but I just don't think it's a good, realistic fit for elite women's sport.
As to the 'too risky', I can only imagine the club's insurers and lawyers looking at the risk factors and legal exposure created by allowing pregnant women to play, with their eyebrows raised past their hairline.
S
simple simon a month ago

Reply
Upvote
1 upvotes
@gu3st Just re. the year off, elite male footballers have to take a full year off due to injury all the time.
M
mamamia-user-482898552 a month ago

Reply
Upvote
3 upvotes
@simple simon Taking full seasons off isn't that common. A few weeks or months, maybe. However, I daresay a sportsman who was injured seriously enough to be unable to work for a full year would be in a precarious position if he were re-negotiating his contract at the time.

Reply
Upvote
@simple simon Not guaranteed a position back, though.
S
simple simon a month ago