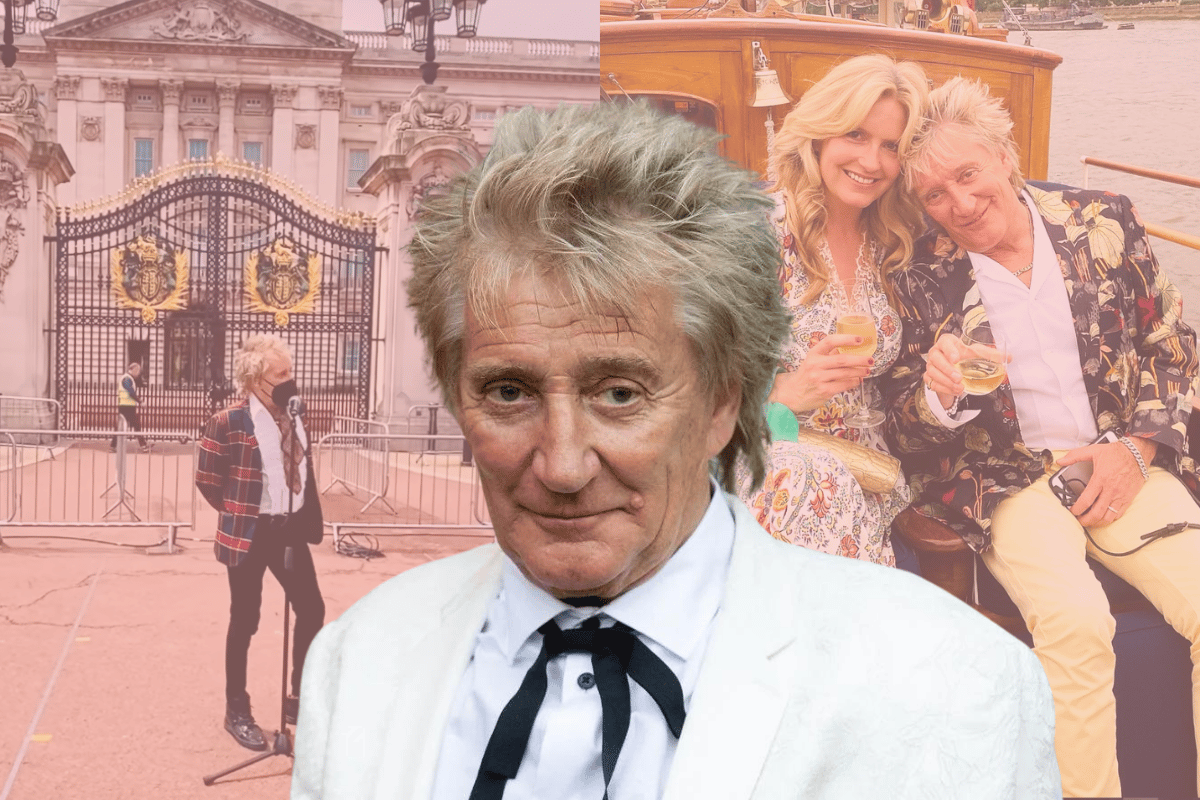 It's not easy for Sir Rod Stewart to get all eight of his kids together. They have five different mothers, and range in age from 59 to 11. But he's found a way to do it.

"They always have plans," the ageing singer joked to the Daily Mirror.

"So I say, 'If you don't come, it is coming out of your inheritance'. So they show up."

With Stewart in the spotlight again thanks to his performance at the Queen's Platinum Jubilee, we decided to look back at Stewart's career, complicated family life and some of his controversies over the years.

Stewart was just 17 and living in London in 1963 when his first child was born. He'd dropped out of school at 15, and had a string of jobs (including being a gravedigger) while dreaming of becoming either a professional football player or singer.

His first serious girlfriend was art student Suzannah Boffey. When she got pregnant, he was "horrified".

"The relationship was pretty much over from that moment," Boffey, now Suzannah Hourde, told the Daily Mail. "A baby was the last thing he wanted."

While Stewart's singing career was starting to take off, Boffey was in a home for teenage mothers, put to work scrubbing steps. Her baby Sarah had health problems when she was born, and Boffey was talked into giving her up for adoption at the age of one.

When Sarah was in her teens, her adoptive parents, Brigadier Gerald Thubron and his wife Evelyn, told her that the singer whose poster she had on her wall, Rod Stewart, was her father. By the time Boffey was reunited with Sarah, she was "consumed" with Stewart.

"She just wanted to play his music and talk about him endlessly," Boffey remembers. "It wasn't painful, just very weird."

Stewart's guitarist and friend, Jim Cregan, has described the moment Sarah turned up to a recording studio in Los Angeles, claiming Stewart was her father.

"So I go out into reception and she's got the dimpled chin, and she's got the hooter," Cregan told the Stars Cars Guitars podcast. "I take one look at her and think, 'Oh God, okay'. So I go back in the room and say, 'I hate to break it to you, mate, either she's had plastic surgery or she's a dead ringer'."

Sarah went through some troubled years, battling drug and alcohol addiction, but eventually got sober and is now close to Stewart.

By the time Sarah appeared at the recording studio to meet Stewart, he was famous worldwide for his songs ('Maggie May', 'Sailing', 'Da Ya Think I'm Sexy') and the seemingly endless string of blonde models he dated.

In 1979 he married actress Alana Hamilton, who already had a son, Ashley, from her marriage to actor George Hamilton. She and Stewart had two children together, Kimberly and Sean, before Stewart ended the marriage.

"Divorce is never easy, but it's even more painful when you find out your husband is having an affair with a beautiful model 15 years younger than you," she said. 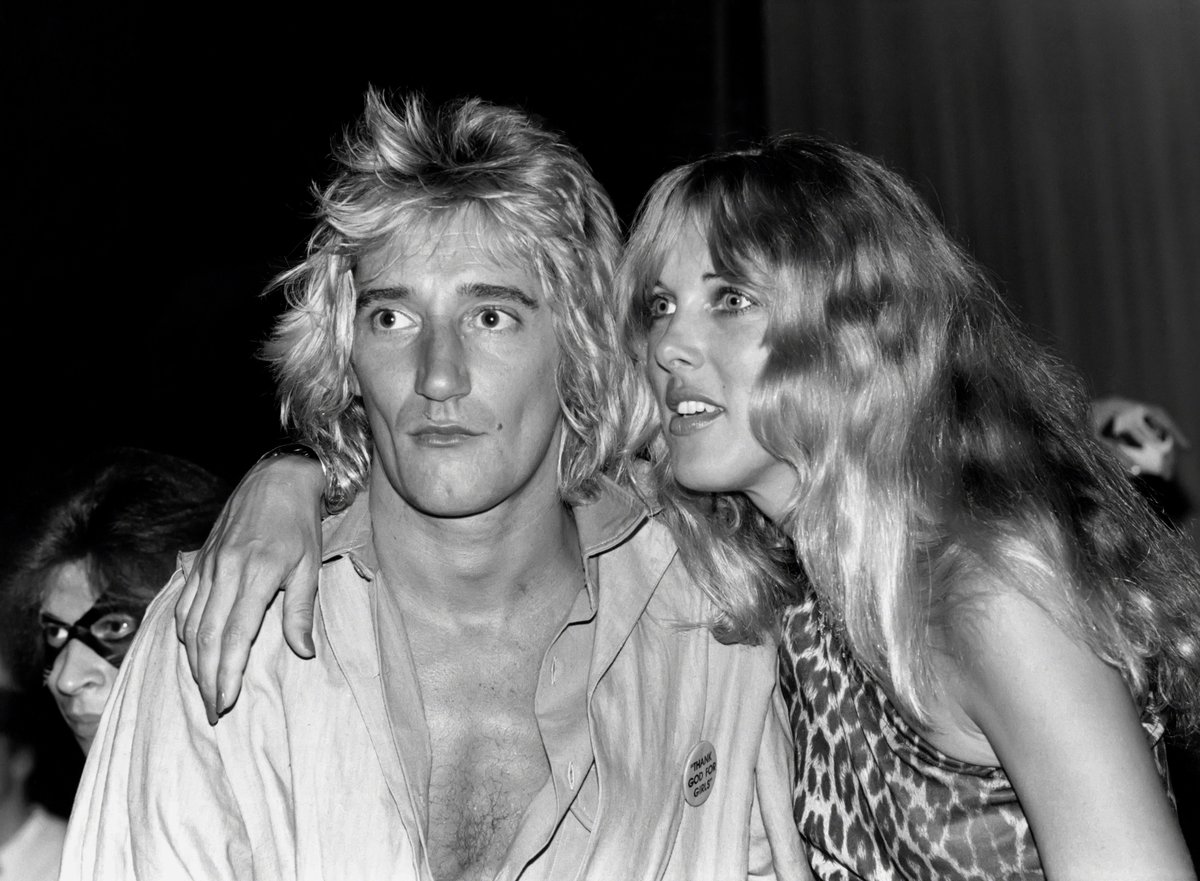 Rod Stewart And Alana Hamilton. Image: Getty. Kimberly grew up to be a model and fashion designer and is now a celebrity closet organiser. In a relationship with actor Benicio Del Toro, she gave birth to Stewart’s first grandchild, Delilah, in 2011.

As for Sean, he had a few brushes with the law, and recently had a fling on The Hills: New Beginnings with Audrina Patridge. Sean describes Stewart as "such an amazing father".

"He told me to just be humble, and to save my money!" he told the Mirror.

In December 2021, both Sean and his father pleaded guilty to the misdemeanour charges of simple battery after a 2019 incident, which saw both of them in an altercation with a security guard at an exclusive Florida hotel.

"No one was injured in the incident and a jury did not find Sir Rod Stewart guilty of the accusation," his attorney Guy Fronstin said in a statement. "Instead, Sir Rod Stewart decided to enter a plea to avoid the inconvenience and unnecessary burden on the court and the public that a high-profile proceeding would cause."

Both father and son were accused of being involved in a physical altercation with security guard Jessie Dixon at the Breakers Hotel in Palm Beach on December 31, 2019. According to court papers, Dixon refused the Stewarts' entry into a private New Year's Eve party taking place at the hotel. The security guard further alleged that Stewart punched him in the rib cage with a closed first, and Sean shoved him. 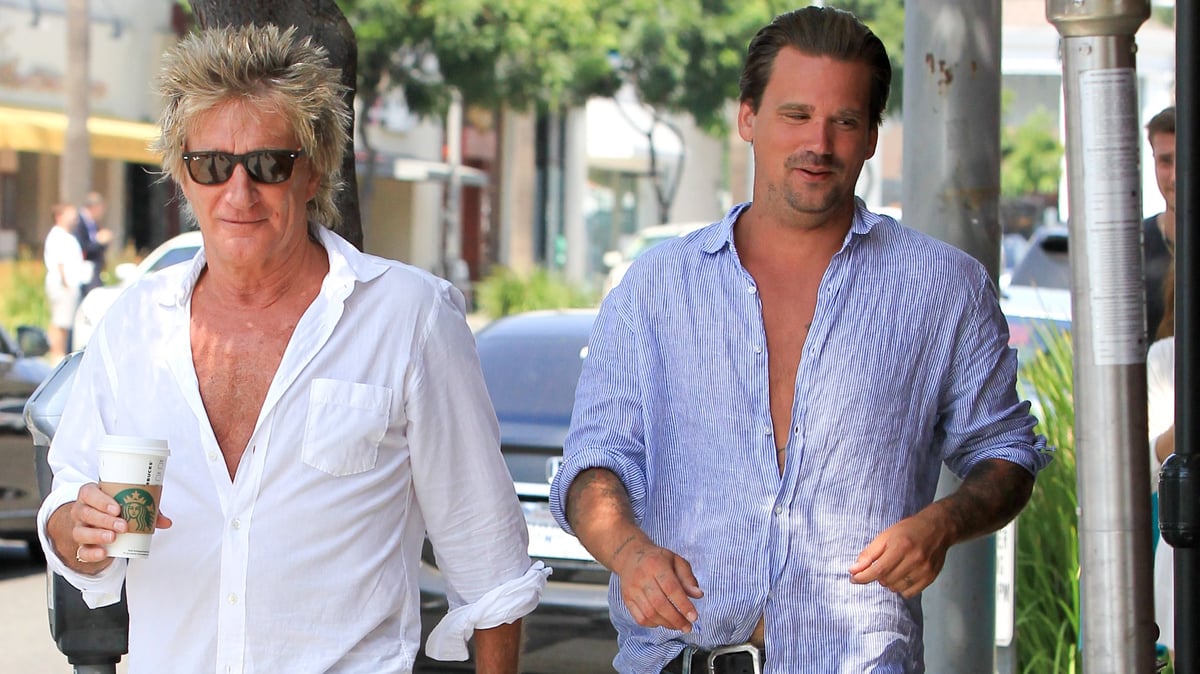 They had a daughter, Ruby. Stewart revealed in Rod: The Autobiography that he was planning to propose to Emberg, and had hired a plane to fly overhead with a banner reading "Kelly - will you marry me? RS."

But the night before the plane was due to fly, Stewart went to a nightclub and saw New Zealand model Rachel Hunter.

He recognised her from an exercise video and started doing her workout moves on the dance floor to attract her attention.

After spending the night getting to know her, "it seemed blazingly apparent to me that this was the person I wanted to dedicate the rest of my life to".

Stewart tried but failed to cancel the plane. Luckily for him, Emberg never saw it. 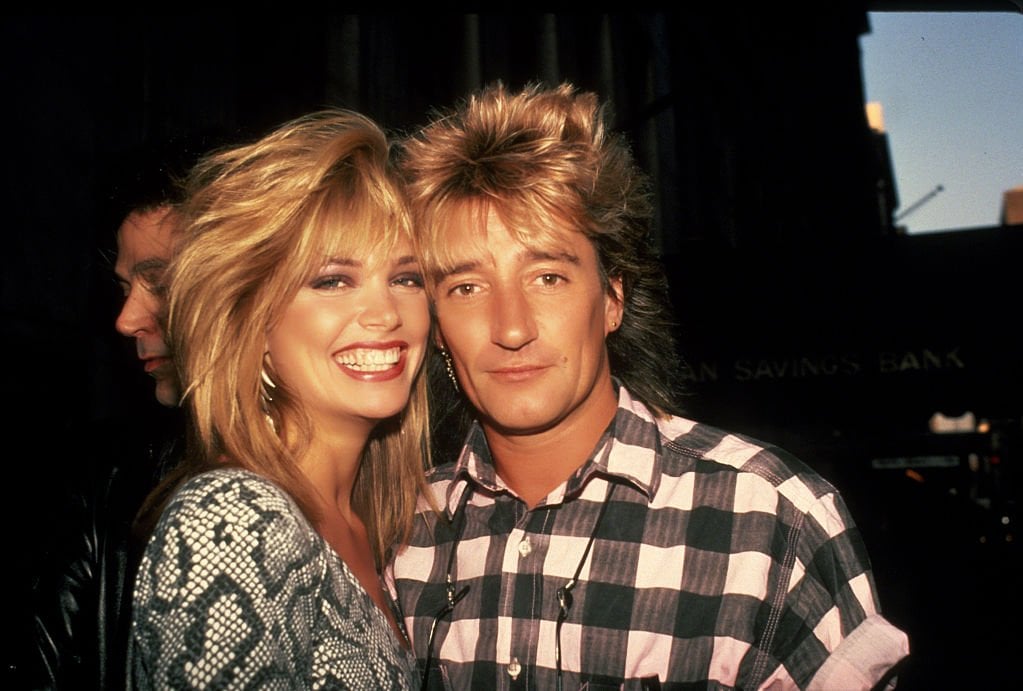 Rod Stewart and Kelly Emberg. Image: Getty. Ruby has followed in both her mother and her father's footsteps by becoming a model and a singer, forming a musical duo, The Sisterhood, with her friend at her dad's suggestion.

"My dad is so supportive, and he's a great dad, so maybe that's why it's always never felt like a weird thing for me," she told AAP when she was in Queensland to perform at CMC Rocks.

When Stewart started dating Rachel Hunter, she was just 21, and he was more than twice her age. After three weeks of dating, he proposed. Hunter told the New York Post that she loved Rod’s sense of humour.

"He's living proof that a man can laugh you into bed."

They married and had two children, Renee and Liam, but Hunter walked out after eight years.

"Like lots of women who marry young and find themselves mothers by the time they're 25, I felt I no longer had an identity," she explained. "I was just nothing."

Liam has grown up to become a professional ice hockey player and Renee is a yoga teacher. Renee says Stewart has asked her to lead a family yoga session.

"He's the sort of dad who'll buy all the gear and get into it," she told Stuff. 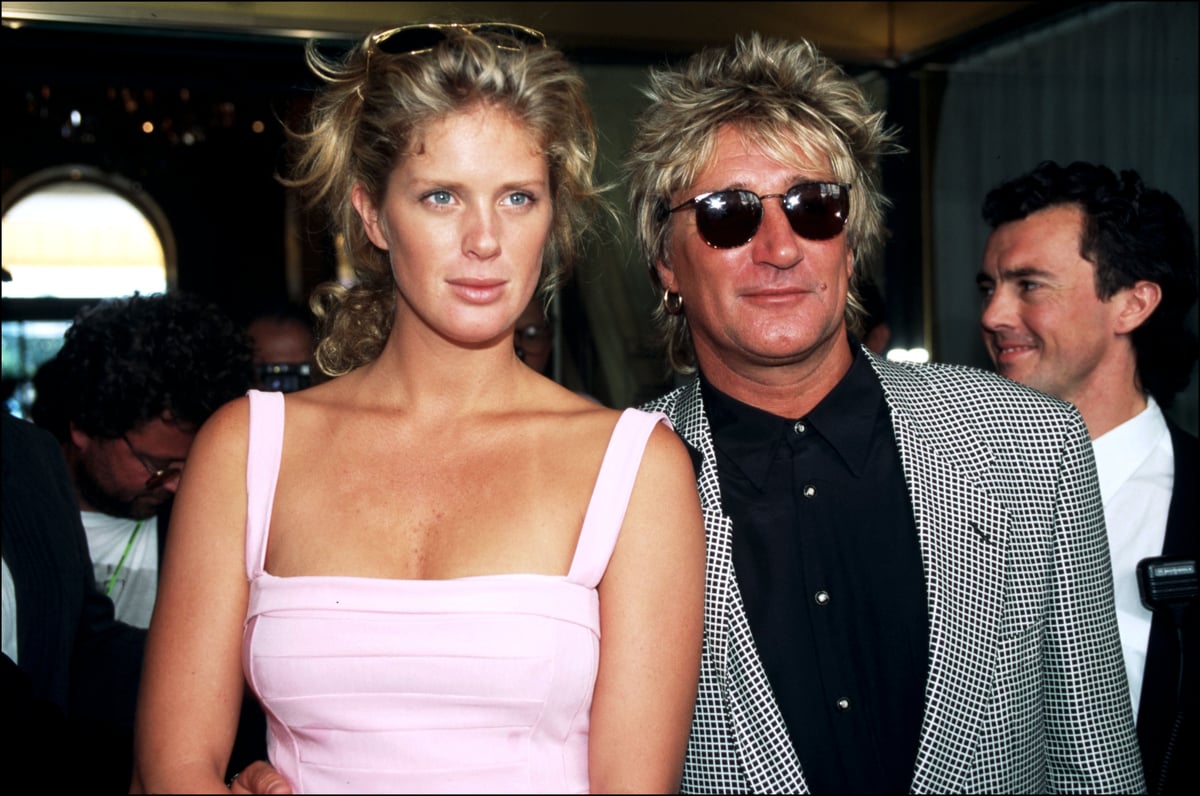 Rod Stewart and Rachel Hunter. Image: Getty. Stewart was devastated when Hunter left him. But a few months later, he met Penny Lancaster at a party. A model and fitness trainer who was starting out as a photographer, she asked Stewart if she could take some photos of him. A romance blossomed, and they went on to marry and have two sons, Alastair and – following two years of IVF – Aiden.

Stewart says Lancaster is "everything" to him, and she's taught him a lot about relationships. "It took me a while to learn, because I have been a scallywag in the past."

He told The Mail On Sunday he admires the way she gets along with all his exes.

"I don't know how she does it. I get on well with all of them, although it can be a bit awkward if Alana and Kelly and Rachel are all in the same room."

Stewart is now 77. In 2018, he told Rolling Stone that he hoped he was a better dad in his seventies than he was in his thirties.

"Children have always been important to me – very important. But I had Kimberly and Sean in the late '70s when I was considerably in debt, and I had to go out and work a hell of a lot, so I missed a great deal of their growing up."

He said he'd built an AstroTurf pitch for the younger kids, complete with floodlights, and they played on it every evening.

"I try and teach them a few things. That is the most wonderful thing ever, just playing football at my age with your kids. I have to be several different fathers because of the different age groups of my kids. You really have to treat all of them as individuals with individual problems."

As for his relationship with Penny Lancaster, the pair has been married for 15 years.

Lancaster has been an avid campaigner for better support for women experiencing menopause, with Stewart getting behind it too this year.

"The menopause freaked me out at first. I thought 'This is the end of the road. I'm not going to have any more sex appeal, I'm not going to be as lenient or forgiving. I've got to say goodbye to the old Penny and say hello to the new one'," Lancaster told HELLO! Magazine last month.

"It wasn't until I spoke to a specialist that I started taking HRT. She was a woman who'd been through it and knew what she was talking about. She reached out and pulled me to the other side! It's like a fresh start. Not the end, but the beginning of a new chapter."

Stewart said about his wife's experience: "It was frightening because she really wasn't the person I married. But we talked about it, which I think is the most important thing a couple can do. We talked it through and I think that's what couples have to do. Men have got to get on with it, understand and come out the other end."

As for what's kept them together, Stewart said it's all about intimacy.

"I'm not talking about sex, but a kiss and a cuddle and a hold," he said to PEOPLE. "Penny and I do that every morning. We hug each other – sometimes in bed, sometimes out of bed, all throughout the day. It's a wonderful relationship. Lucky geezer, aren't I?"