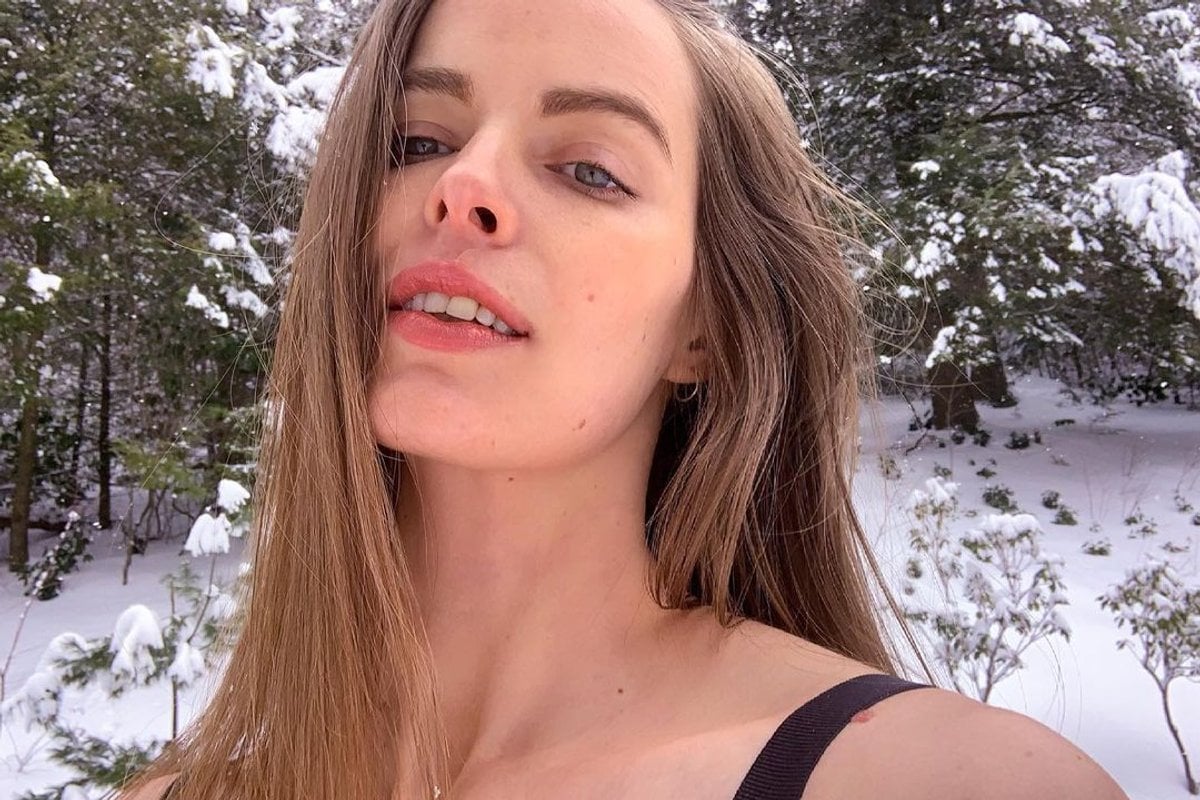 Robyn Lawley is one of the most famous faces in Australian modelling.

The Sydney-born model, who is based in New York City, has appeared within the pages of Vogue, Harper's Bazaar, Marie Claire, Elle, and Glamour, and featured as the face of brands like Ralph Lauren.

But in 2018, everything changed for Lawley.

After being diagnosed with lupus, a chronic autoimmune condition that causes immune cells to attack healthy cells, Lawley had an accident.

"I fell down a staircase after having a seizure at the top of it. And, you know, it was a really big fall," the 31-year-old told Mamamia.

After suffering a seizure on her staircase, the model fell from over two metres, cracking her skull and injuring her face.

Afterwards, Lawley was left with two scars – a "lightning bolt" scar on her forehead and a small scar on her chin.

But while she was conscious that her facial scars could potentially affect her career, she decided against having them cosmetically removed.

"I don't want to be ashamed of the fact that I survived one of my accidents," Lawley told Mamamia.

"My sister is a paramedic, and she goes to so many cases every day. I remember calling her one day and she told me, 'You survived. Do you know how many accidents I go to where people don't survive? You should be proud of those scars.'

Lawley was first diagnosed with lupus and antiphospholipid syndrome (APS) after her now six-year-old daughter Ripley was born in 2015.

"It all happened very fast," she shared.

"I was having strokes, and I was diagnosed with lupus at the same time. Luckily for me, I've managed my lupus into remission.

"But the unfortunate factor for me after having a stroke is that I have epilepsy for life because a blood clot of that magnitude does cause damage."

Lawley's experience with her health condition ultimately led to the creation of her new Audible Original podcast, Every Body with Robyn Lawley: Surviving and Thriving in a Body Shaming World.

The new podcast, which features interviews with Jameela Jamil, Turia Pitt, and Khadija Gbla, looks closely at the body positivity movement, and the people (and bodies) it often leaves behind.

Along the way, Lawley learned a lot about self acceptance from speaking to Pitt, who suffered burns to 65 per cent of her body in an ultramarathon, and author Lucy Blum, who suffered leg scarring after a motorbike accident.

"I hope listeners grow with it like I did," she shared.

"Especially the inspirational talks from Turia Pitt or Lucy Blum that have been through huge accidents. For me, as an epileptic, I have been through quite a few accidents now. And I wake up in hospital beds all over the world. And I have to put on something inspiring sometimes to get out of that hospital bed.

"[Turia and Lucy's] accidents in a sense are so extreme and they've been through so much, but they come out the other end still smiling and carrying on. They don't look at their bodies and go, 'Oh, I need Botox to fix my skin.' They are more concerned with other things like their family and doing more for themselves in that sense."

Lawley has been in the modelling industry since she was 16.

Throughout her career she has been a fierce advocate for body diversity in the fashion industry. In 2018, the model even launched a boycott against the Victoria's Secret Fashion Show for its lack of body diversity.

Listen to Robyn Lawley on Mamamia's No Filter below. Post continues after podcast.

But while she's seen a lot of change in the industry over the years, there's still a long way to go.

"I think the modelling industry has changed. It's slow, but it's changing," she said.

"The more that we stand up and say something... it's definitely having a profound effect. We need to stand together and just show women that things like [stretch marks and cellulite] don't matter.

"Especially after having a baby, we want to erase that, or [focus on our] post baby body image. And you've had a baby. That's such a huge undertaking. We shouldn't be wanting to erase that straightaway. [We should] be in awe of our bodies after we have had a baby."

As for what she'd like to see change in the fashion industry, Lawley hopes to see a deeper commitment to all facets of body inclusivity.

"I think age especially is the biggest frontier. You kind of hit this age, like where I am... and you just get cast off the side. Thirty-year-old models don't really exist anymore. [As a model], your career spans between the ages of 15 and 25, and that's it.

"It's just this bizarre idolisation of a teenage body. We should be representing what the buyers are and buyers are a varied bunch of people. I want to see a woman my age modelling the fashion that I want to buy."

Every Body with Robyn Lawley: Surviving and Thriving in a Body Shaming World is available only on Audible.