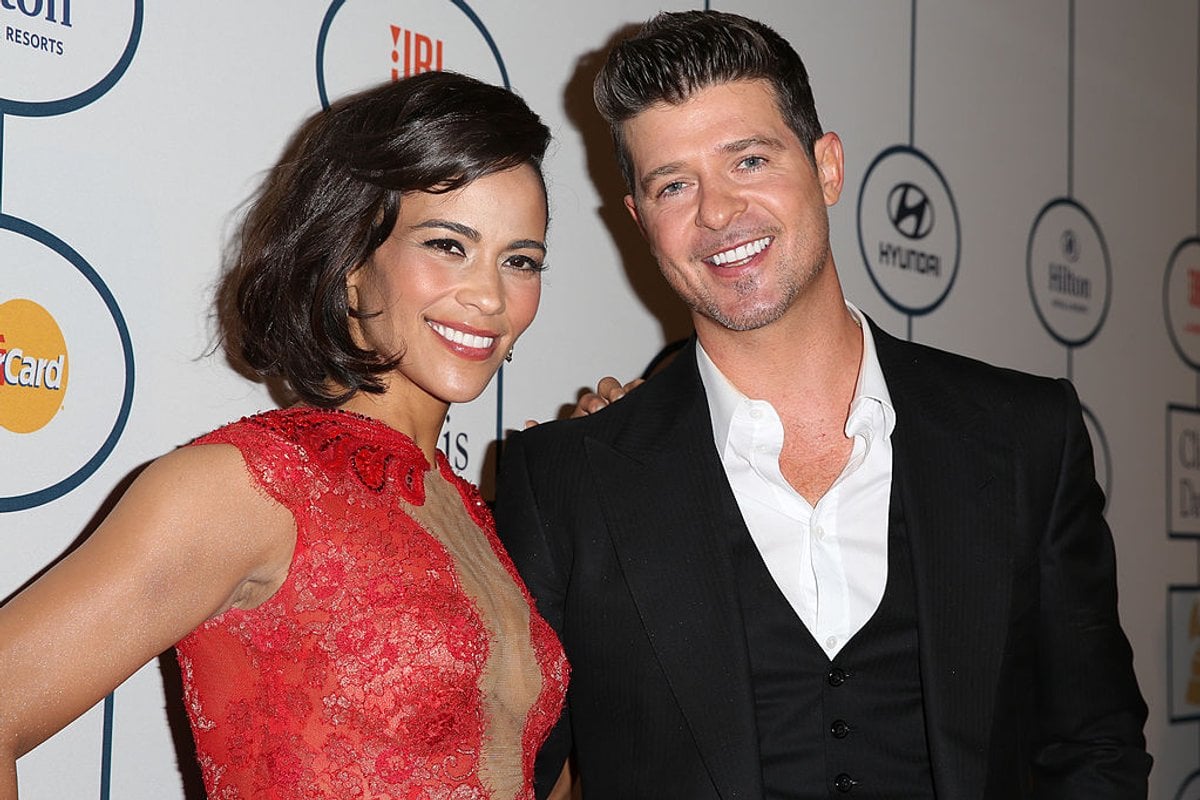 Model Emily Ratajkowski has alleged that Robin Thicke sexually assaulted her on the set of the video for his 2013 song “Blurred Lines”, groping her bare breasts.

It’s not the first time that serious allegations have been made against the singer.

Thicke and Patton were childhood sweethearts. They met in 1991, at an underage dance club in Los Angeles, when Thicke was 14 and Patton was a year older.

Thicke was used to being in the limelight. His dad, Alan Thicke, starred in the 1980s sitcom Growing Pains, while his mum, singer/actress Gloria Loring, topped the music charts and was on Days Of Our Lives. The confident teenager serenaded Patton with the Stevie Wonder song “Jungle Fever”, and soon they were dancing together.

"I knew she was special the night I met her," Thicke later said. "I was only 14, but she was already the most special girl."

Thicke made a name for himself as a songwriter, co-writing songs for Brandy and Christina Aguilera. But it took a long time for his singing career to take off.

As for Patton, she co-wrote songs for some of Thicke’s albums before turning to acting, starring in movies like Mission: Impossible – Ghost Protocol.

In 2013, Thicke released “Blurred Lines”, featuring Pharrell Williams and T.I.. Thicke said on The Howard Stern Show that the song was about Patton, and dropped some hints about their sex life.

“My wife is Mrs Good Girl, but gradually over our marriage, I've turned her into a bad girl,” he said.

The song was criticised for perpetuating rape culture. It also became one of the best-selling singles of all time.

The video featured Thicke, Williams and T.I. with models Ratajkowski, Elle Evans and Jessi M’Bengue. Two versions were filmed, one rated and one unrated, with the models topless.

"People say, 'Hey, do you think this is degrading to women?'” Thicke told GQ about the video.

“I'm like, 'Of course it is. What a pleasure it is to degrade a woman. I've never gotten to do that before. I've always respected women.’”

He later claimed his comments were taken out of context.

Thicke performed “Blurred Lines” with Miley Cyrus twerking in latex underwear at the 2013 MTV VMAs. He caused more controversy with a photo taken at the VMAs afterparty, when he was snapped with a female fan, Lana Scolaro, with a mirror behind them showing his hand on her bottom.

"I knew his hand was on my butt, but I didn't know that there was a mirror," Scolaro told E! News.

In early 2014, Thicke and Patton announced their separation, saying that they “will always love each other and be best friends”.

At first, Thicke didn’t seem to believe it was over. He called his next album Paula, and explained to Hot 97 that he had lost the love of his life.

“We just weren't happy together anymore, and I still had so much I wanted to apologise for, and things I wanted to take responsibility for, so that's pretty much what the album's about."

But Patton wasn’t interested. Later that year, Thicke started dating model April Love Geary, who was, at the age of 19, 18 years his junior.

In early 2017, Thicke hit the headlines over a custody dispute with Patton.

According to court documents obtained by E! News, Thicke said Patton repeatedly denied him from seeing his son Julian, accusing him of “excessive spanking”.

Thicke had been reported to the Department of Children and Family Services, but declared he only used “light spanking” and only a “last resort”.

Patton asked the court for a temporary restraining order against Thicke, accusing him of domestic violence. According to documents obtained by People, her request was 52 pages long, and she alleged a number of episodes of abuse.

In the court documents, she declared that she “observed him to have inappropriate contact with the masseuse,” and, shortly after, she declared, “Robin became physically violent with me. He pushed me down and kicked me.”

Patton declared in the documents that a breaking point came around the time of the 2013 VMAs when, she alleges, she found Thicke in bed with two naked women.

“I wanted to leave Robin but at the same time, I was incredibly fearful of angering him, and I did not want our son to grow up in a broken home. I was afraid of Robin’s volatility, his retribution.”

Us Weekly reported that in court documents, Patton claimed that Thicke threatened multiple times to “bash my f--king head in”, cheated on her with numerous women and, on one occasion, attempted to cheat on her with another woman in their bungalow while she slept.

“When I confronted Robin about this, he admitted to having attempting to have sex with the stranger, but stated that he ended up being unable to do so because of the amount of cocaine he used that evening that caused him to be unable to perform,” she alleged in the documents.

Thicke’s lawyer Angela Pierce di Donato put out a statement to People: “Paula never reported any domestic violence until she was in a position of contempt by violating the custody orders. Infidelity has nothing to do with custody. She is attempting to throw anything at him to hurt him, but Robin’s focus is their son.”

Earlier this year, Thicke told People that he and Paula "have never been better" and are “co-parenting at our very best”.

Thicke is now engaged to Geary. They have three children together: Mia, Lola and Luca.

He is currently one of the judges on the US version of the hit show The Masked Singer, and released a new album earlier this year. He hasn’t yet responded to Ratajkowski’s allegations.