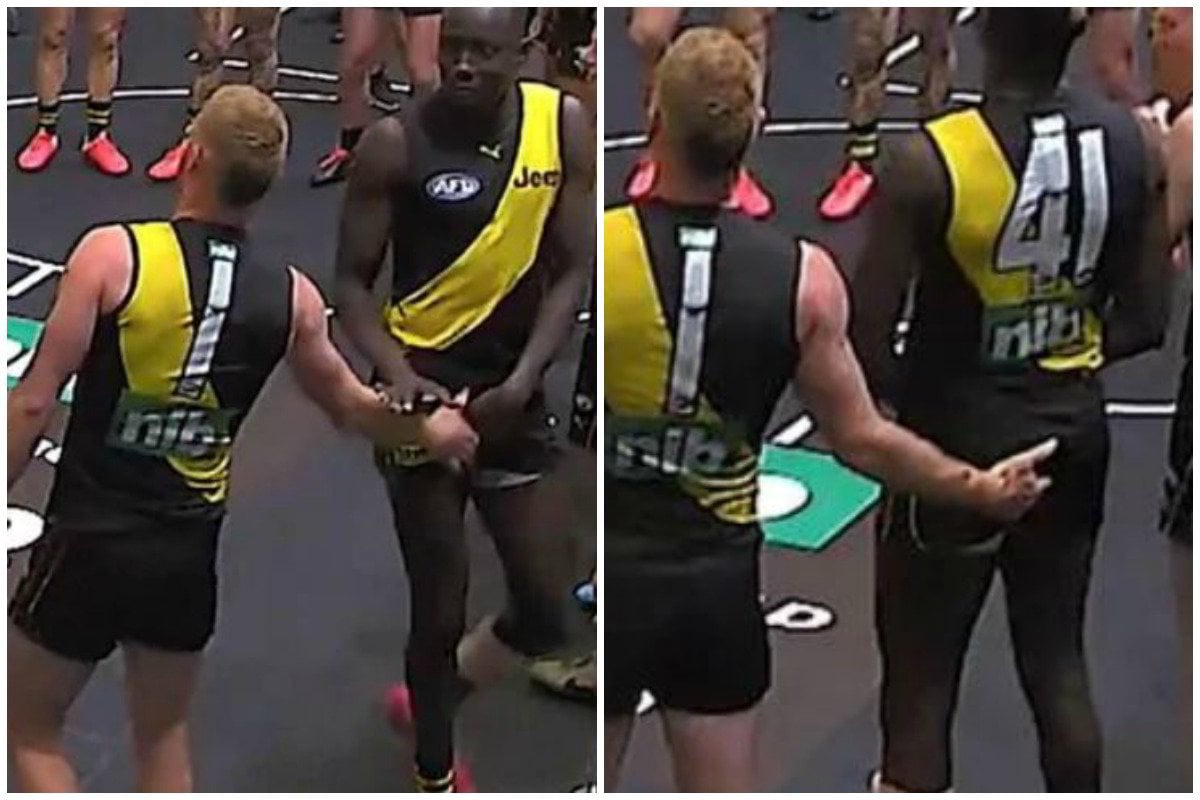 Over the weekend, footage from the locker room of the Richmond Tigers AFL team began circulating online. It was a snippet of Tuesday's match-day broadcast, taken shortly after the team triumphed over the Brisbane Lions.

The clip shows the players gathered in a circle, celebrating their win and trumpeting their team song.

Then comes the incident that AFL commentators and former players have described "repulsive" and "horrific".

Premiership-winning player, Nick Vlastuin, reaches across and inserts his finger into the rectum of teammate Mabior Chol. Chol jumps away in shock. Vlastuin can then be seen following him around the locker room and hitting him in the genitals multiple times.

It was reporter, Hugh Riminton, who first flagged the incident via Ten News.

In his report, he also surfaced footage from the previous week in which another of Chol's teammates, Jayden Short, also struck him in the genitals during a post-match locker-room gathering.

As the headlines and commentary about the incident took hold, yet more vision surfaced. This time from inside the St Kilda locker room.

The players responsible have since apologised.

"It was a stupid action and I am deeply embarrassed. I've apologised to Mabior," Vlastuin said in a statement.

Short added that, "It was unacceptable behaviour and a poor example."

Chol won't be pressing assault charges. He said, "I have no issue whatsoever with those players, or any of my teammates, but understand that is not the sort of example we should be setting."

The AFL will this week conduct a briefing with all 18 clubs about fostering safe workplaces and says it plans to develop an educational program at the end of the season with "specific focus on players and sexual harassment".

"What we saw in recent times with players from a number of clubs touching each other inappropriately is clearly not the standard of high performance in the workplace that we could — or should — accept," AFL CEO Gill McLachlan said.

But alongside the outrage and condemnation ran a predictable narrative: boys will be boys; they were just having a laugh.

Radio station Triple M parodied the incident in a crude re-writing of the Tigers' team song, which labelled it "a cheeky squeeze above the knees". And Sam Newman, a former panelist on the AFL Footy Show, dismissed the groping simply as evidence that the men involved "get on extremely well".

Grabbing someone on the crotch in the rooms after a victory, is hardly being ‘groped’. Just means the lads in question get on extremely well with one and other - or they wouldn’t have done it. Stop with the cow-eyes.

The groping incidents have revived debate about the toxic culture in the AFL.

But this kind of behaviour is not code-specific.

Several Australian sporting stars have performed acts on fellow players that, in the very least, send a confusing message about personal boundaries.

The justification of this is extraordinary, the comments are unbelievable. These men are role models, kids playing junior footy see this on teli and think it’s okay. IT IS NOT OKAY. I don’t care about the ‘boys club’ BS, this is severely in appropriate, grow up 🤦🏼‍♀️ https://t.co/O0SvskwpWP

The most infamous example is that of John Hopoate, the Wests Tigers player who was banned from playing for 12 weeks after he inserted his finger into the rectums of three opponents during a 2001 game.

"It was all consensual," Khawaja tweeted after the footage appeared online. "Just having a joke with the debutant."

Baffled by the apparent lack of concern about the incident (it was largely met with quips and puns in both social and traditional media), Stuff writer, Laura Walters, sought the perspective of sports psychologist, Gary Hermansson, who urged us not to sexualise such behaviour.

"It's a way of belonging," he said. "It's always been there, it always will be probably because that's the nature of athletes."

Indeed, ALFW player and former Hockeyroo, Georgie Parker, has this week defended the banner image on her social media accounts. It features her with her hand on the backside of her Rio Olympics teammate, Kathryn Slattery.

Parker distinguished genital touching and groping from a "bum tap", which, she argued, is an embedded part of sporting culture.

5. Probably not a great look to touch someone’s 🍆 on prime time tv, a lapse in judgment from them
6. Calling sexual assault and outrage on someone else’s behalf is peak 2020
7. Is this really what we are going to crack it over at the moment? Honestly 🙄🤦🏽‍♀️

For the record, Slattery seemed unbothered. When Parker first uploaded the picture to Instagram in 2019, she left a comment that read, "Come touch my butt again plz @georgieparker."

This kind of context is important, absolutely.

But so is questioning stubborn cultures.

It's only logical to wonder: why is the same not true in sport?

Reply
Upvote
6 upvotes
this behaviour is showing young boys that it is ok too. my son was touched up the bum by a kid in his class, during class, and he was so upset about it he had to leave and go to the toilet and cry. this is unacceptable. he is 12 years old.
L
laura__palmer 2 years ago

Reply
Upvote
1 upvotes
@c_floyd Exactly right. Which is why people defending this sort of behaviour are absolutely clueless.
F
flyingdale flier 2 years ago