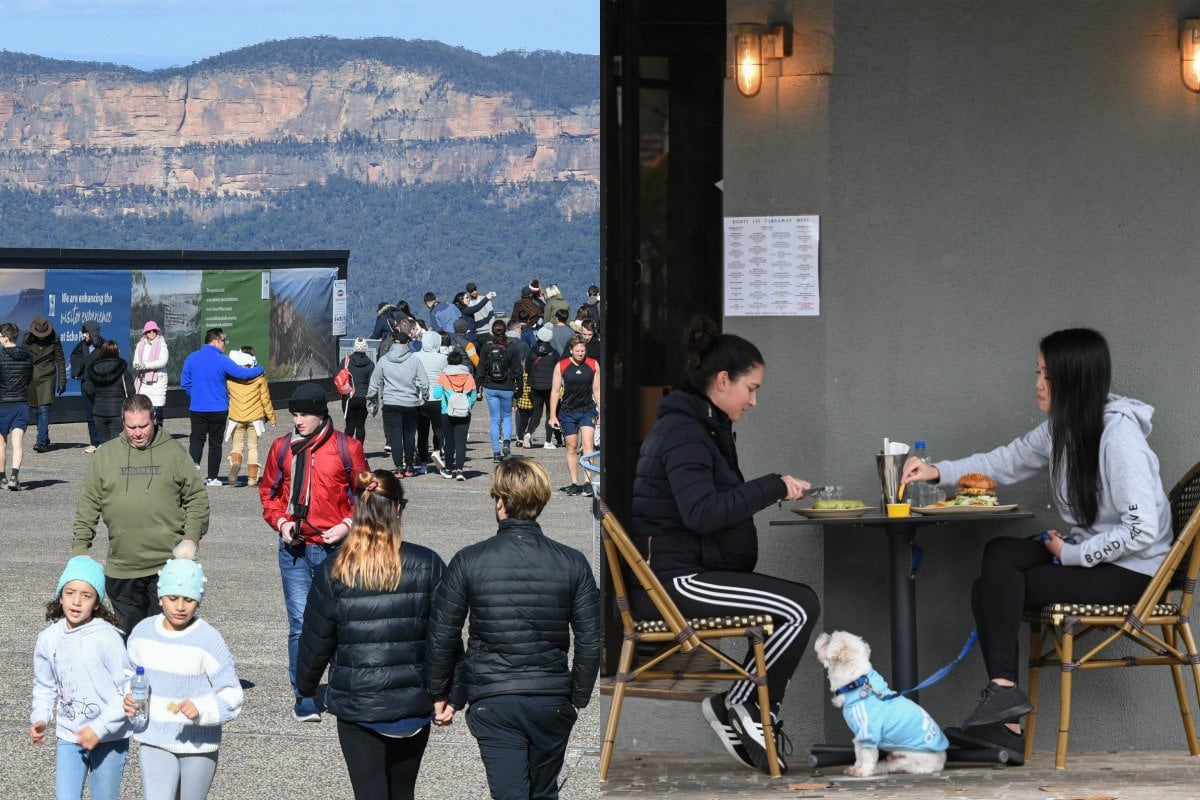 Depending on your home state or territory, restrictions put in place by COVID-19 after either continuing to loosen, or tightening as we head into July.

Today, Wednesday, July 1, many states will see the biggest returns to normal they've seen since restrictions came into place in mid-March. In Victoria, however, some residents will find themselves back in lockdown.

The federal government outlined a three-step plan in May with regard to lifting restrictions, but premiers and chief ministers have been adopting those changes at their own pace.

Here's what’s changing this week around the country.

Grab your netball bib, because children's and adult community sport can resume in NSW today.

The 50-person cap on indoor venues will be scrapped, so long as people are seated. Cinemas, theatres, performance halls, theme parks, show grounds, strip clubs and brothels can reopen.

Limits on household visitors and outside gatherings remain capped at 20 people.

If you're keen on the footy, large outdoor venues like stadiums with a maximum capacity of 40,000 people will be permitted to host up to 25 per cent capacity, as long as they're ticketed and seated only.

And for those who have returned to their offices and travel by public transport, passenger limits are increasing to:

You'll need to continue sitting on the green dots.

Restrictions will also apply for people who enter those postcodes, but don't live there.

"These are extraordinary steps, these are not things we have had to do in the past but such is the nature of this virus, it is so wildly infectious that if we don't take these steps now we will finish up in a situation [where instead of] locking down 10 post codes we will be locking down every postcode," Premier Daniel Andrews said when announcing the measures on Tuesday.

The below restrictions, which apply to the rest of Victoria, do not apply in these postcodes.

Victoria has tightened limits on people allowed in a home; only five guests, including children, are allowed at one time.

At this stage, indoor and outdoor limits will be relaxed to allow up to 50 people at restaurants, cafes, pubs, community halls, libraries, museums and places of worship.

Queensland borders will open to all states but Victoria from July 10, following an announcement from Premier Annastacia Palaszczuk on Tuesday.

Premier Palaszczuk said anyone who had travelled from Victoria - including Queenslanders - would be prevented from entering Queensland from this Friday, July 3 unless they quarantined at a hotel at their own expense for two weeks.

South Australia plans to open its borders to NSW and the ACT from July 20, or possibly before. It had planned to also open to Victoria, but those plans were scrapped on Tuesday as the state's surge in COVID-19 cases continued.

SA borders are already open to other states and territories.

South Australia has no limits on visitors to your home, as long as social distancing is adhered to, and no outdoor gathering limits.

You can travel within the state freely, besides some remote communities.

ACT officials are still to determine restrictions on larger crowds for professional sport and entertainment, as well as if casinos and gaming venues can reopen.

Lifting restrictions on face-to-face learning at universities and other training providers, and workplaces are yet to be announced.

Nothing changes in WA today, but if you hold out another couple of weeks, all gathering and capacity restrictions are to be lifted on July 18.

There are currently no outdoor gathering limits, and no limits on the amount of visitors you can have at your home (as long as you socially distance).

Life is already pretty normal again in the NT, with no outdoor or indoor gathering limits as long as you can keep 1.5 metres between you and anyone you don't live with.

From July 17, all border and quarantine restrictions are to be lifted.

Tasmania moved to stage three easing of restrictions last month, and is on track to open its borders from July 24.

Currently, up to 250 people are allowed to gather indoors or a maximum of one person per 2 square metres under the density limit, whichever is less, and up to 500 can gather outdoors, but the number of people allowed to in a household at once remains capped at 20.