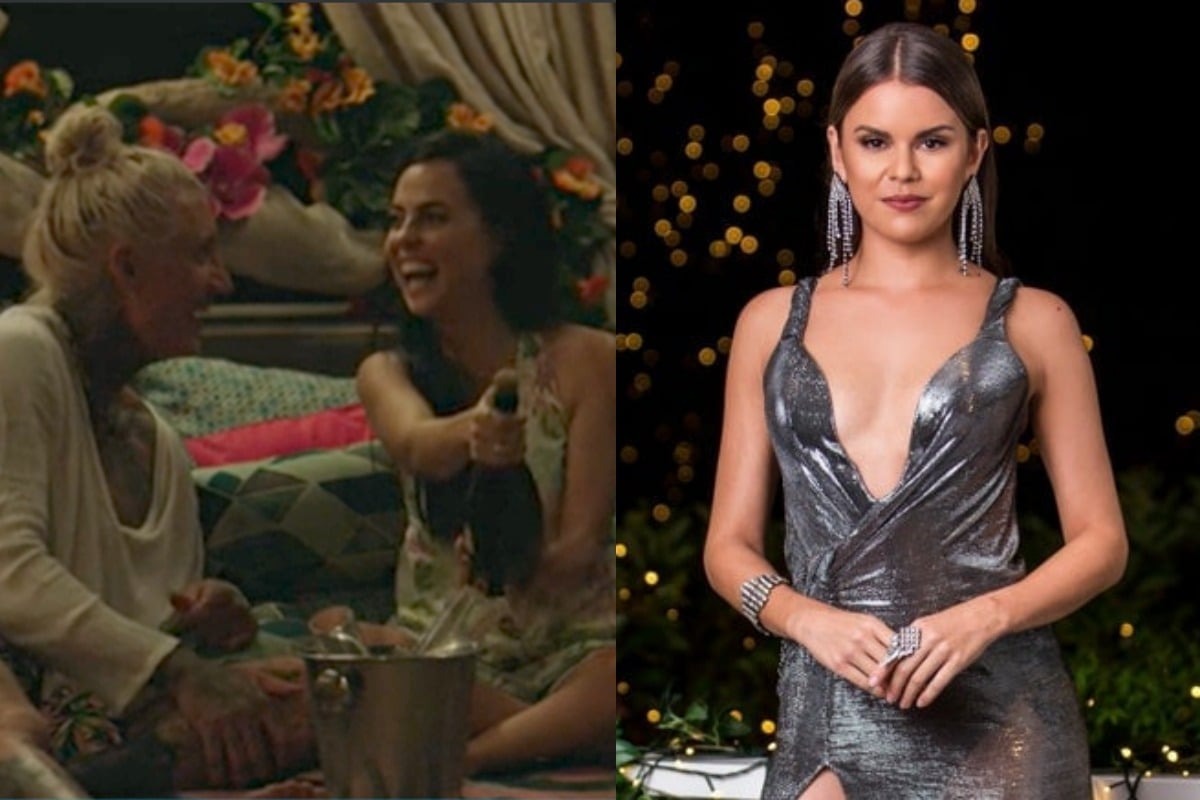 1. ''When you break girl code.'' Renee Barrett reacts to Ciarran and Cassandra on Bachelor In Paradise.

We're only one episode into Bachelor in Paradise and there's already a whole lot of drama brewing.

Last night we watched as Cassandra Mamone flirted with Ciarran Stott, much to Abbie Chatfield's dismay. While Ciarran seemed very keen on Cass, there was one thing at the back of Cass' mind: her friendship with Ciarran's ex-girlfriend Renee Barrett.

"Renee is my friend. She was from Matt’s season of The Bachelor. Obviously I am chuffed I have this great banter with Ciarran but at the end of the day, I’ve also got Ciarran’s ex-girlfriend at the back of my mind," Cass told the rest of the contestants over dinner.

Now, a video has surfaced of Renee reacting to Ciarran and Cass' first night in paradise. And it's fair to say, she isn't happy about it.

The video, captioned "when you break girl code", was shared on the Bachie Funny Instagram page. In the video, Renee and her friends are seen at a viewing party shouting "b*tch" at the camera.

"Renee watching Cassandra refer to her as a 'good friend' on Paradise while also trying to get with her ex Ciarran seconds after he said he cheated on her," the caption read.

Renee is rumoured to be joining Bachelor in Paradise as an intruder. And if she does, we're sure there's going to be a lot more drama going down.

Bachelor in Paradise continues tonight at 7:30pm on Channel Ten.

Listen to The Spill, Mamamia's daily entertainment podcast. In this episode, co-hosts Kee Reece and Kelly McCarrendiscuss everything Bachelor in Paradise. Post continues below.

2. GET EXCITED: The first trailer for Locky Gilbert's season of The Bachelor is here.

After being postponed earlier this year, the first trailer for Locky Gilbert's season of The Bachelor has finally dropped. And we couldn't be more excited.

"Being in love is like the best feeling in the world. It definitely takes your breath away," Locky, who also appeared on Australian Survivor, is heard saying in the video clip.

"I've definitely had my heart broken... Love is like the scariest thing in the world."

Due to COVID-19, this season of The Bachelor will certainly look different, with contestants having to go on virtual dates.

"We were three-quarters of the way through series when we went into lockdown, and basically all the cast returned home," Channel Ten’s head of entertainment Stephen Tate told The Australian.

"So we would find ways for the show to continue in the same way that dating continues in the wider world. We call it love in lockdown. They continued to virtually date, both as single dates and as group dates."

The Bachelor will return to Channel Ten soon.

3. "I was nasty to you." Bachelor in Paradise's Mary has apologised to Abbie.

It's only been a day since the first Bachelor in Paradise episode aired, and already, cast mates are apologising for their "bad behaviour" on the show.

During last night's episode, Mary Viturino claimed that Abbie Chatfield was using her body to get attention from fellow contestant Ciarran Stott.

After the episode aired, however, Mary publicly apologised for her comments on Instagram.

"I'm sorry Abbie, I was nasty to you. We are different, we are all different people. I hope you forgive me and I hope you're doing well," the 32-year-old reality star said on her Instagram story.

"It's not personal, I think I just run my mouth when I'm on the show, I get too excited and I have no filter."

She continued to share that although she said some negative things, she's usually a nice, supportive person. Oh, and she loves Abbie.

"I just wanted to reach a hand and say if you ever need someone to talk to, I'm happy to be here. I'm a mum and I love doing that for people, being there, listening and giving nice advice if you want to. Love you all, love you Abbie," Mary concluded.

4. Urzila Carlson has been announced as Lindsay Lohan's replacement on The Masked Singer.

Teaser trailers for this year's season of The Masked Singer have started to pop up everywhere. And something we noticed very quickly was that Lindsay Lohan is nowhere to be seen.

Now, it has been announced that comedian Urzila Carlson will be her replacement.

Channel 10 explained that due to COVID-19 travel restrictions, Lohan, who lives in Dubai, cannot travel to Australia and appear on the show. And therefore, Carlson, who is best known for appearing on Have You Been Paying Attention, will be taking her place.

In a statement released by the network Carlson said, "I’m pumped to do the show, but I’m also upset that Lindsay can’t be the other panellist. But for anyone who is at home and angry, think about this - I have to wear her wardrobe because they’ve already spent the money, so they are just putting in a few clips for me. Spare a thought for me, and tune in just for that, and the amazing talent under the masks!"

The Masked Singer Australia is coming soon to Channel 10.

5. From Melissa's mystery box to the Golden Snitch: The 10 best moments of MasterChef 2020.

If you've been watching this season of MasterChef, you will agree when we say that it has hands down been the wholesome content we've needed during this crazy time.

The reality cooking show which started back in April, gave us an instant sense of relief as the world suddenly became filled with overwhelming uncertainty.

But sadly, there are only a few days left before it comes to an end for another year.

So, let's take a trip down memory lane.

Here are the 10 best moments from MasterChef 2020.

1. Introducing us to the new judges.

We cannot deny that when they announced three new judges would replace the veterans, we were worried.

But quickly we had our answer: Hell yes.

For more of our favorite moments from MasterChef, read our earlier article here.