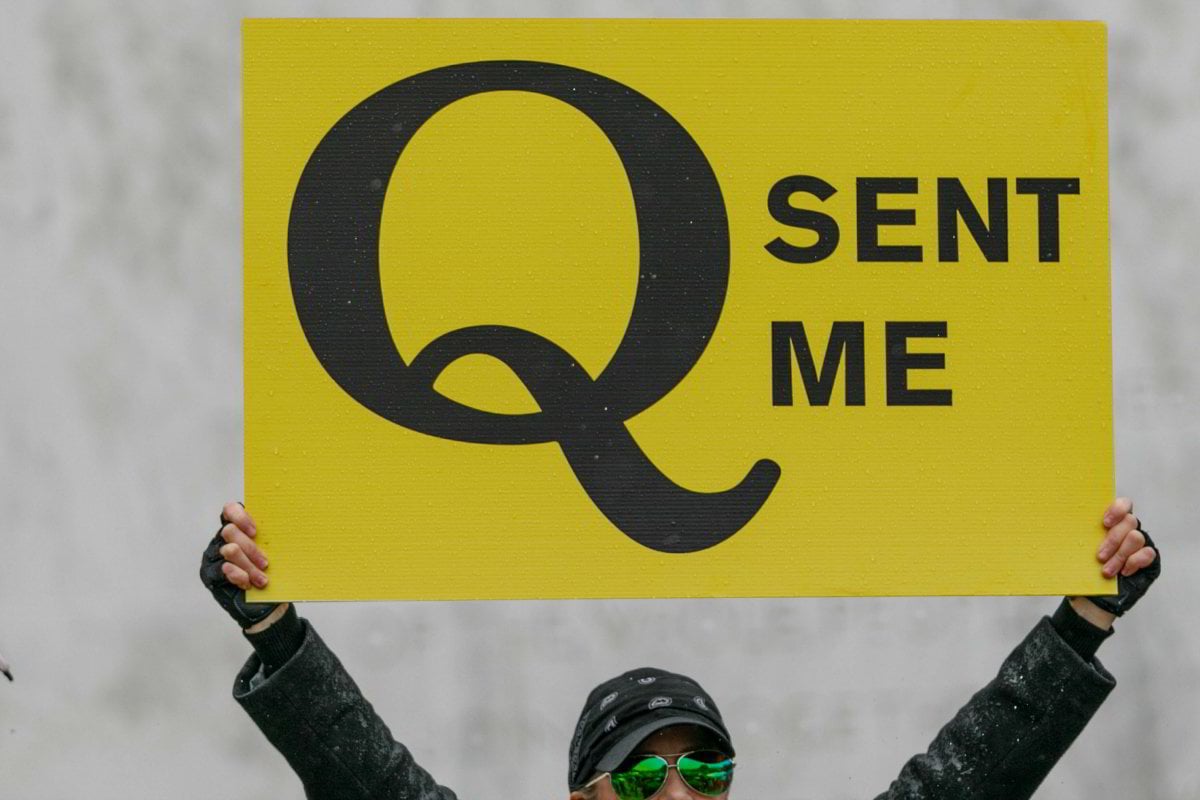 When COVID-19 infections began to rise in her city earlier this year, Julia* retreated to the relative safety of the country.

She lives with a primary immunodeficiency and damaged lungs, which makes her vulnerable to respiratory infections and puts her at increased risk of serious illness should she contract one.

Julia's partner made the move with her, yet shortly after, he started to raise bizarre theories about the crisis.

Watch: How to talk to someone who's against vaccinations.

The unfolding pandemic, he argued, had been deliberately unleashed as a means of population control, and the disease wasn't as widespread or dangerous as health authorities claimed. In his view, COVID-19 public health measures like city lockdowns were simply part of an ongoing quest to make citizens submit.

They've been together for roughly a year, and he'd raised controversial opinions before; theories about a secret organisation controlling the world, about coordinated attempts to divide communities along wealth, race and political lines. But this hit too close to home.

"I reacted very badly," she told Mamamia. "I actually got really triggered, and had a panic-attack type response — very fight or flight," she said.

The rise of conspiracy theories.

Mamamia communicated with several people who've found themselves grappling with a friend or loved one who's adopted COVID-19 conspiracy theories.

We've kept them anonymous to preserve the privacy of all involved.

"My best friend believes COVID is a conspiracy," one woman shared. "We've had a few heated talks about it, which end up trailing off. I never bring it up anymore, but now she's messaging me COVID conspiracy articles... [I] love her very much, but it's putting a strain on our relationship."

"My mother-in-law casually brought up her suspicions that pharmaceutical companies created the pandemic so they could profit off a vaccine," another said. "I was so shocked. She's a highly educated person."

"I recently made a new friend," said another. "We clicked instantly and in so many ways are so similar... But then she told me she doesn't vaccinate her kids... and she made some comments about how the actual death rate of COVID is 90 percent lower than we're being told and that it's all some scare tactic to take away our rights... I've made it clear that I don't share her view and shut down the conversations quickly when she brings it up... I've always been someone who believes we are entitled to our own beliefs... But I will admit, this feels really different, and I am struggling."

There were several mentions of highly intelligent relatives falling into conspiracy "rabbit holes" on YouTube and social media, and emerging with a sudden, intense mistrust of governments, media, science and medicine.

This particular crisis has presented a perfect storm for conspiratorial thinking.

Why conspiracy theories have flourished during the pandemic.

During the COVID-19 pandemic, social media outlets and internet providers around the world have reported a spike in traffic. For some, that's simply a product of being homebound; for others, it's a quest for information amid a crisis.

Either way, we're being presented with a wealth of easily accessible content about what's unfolding around us. Only, much of it is inaccurate.

That's been fostered, in part, by the fast-moving nature of this crisis.

As the pandemic evolved, so too did the scientific community's understanding of this novel coronavirus. That created what biologist Carl Bergstrom from the University of Washington calls an "uncertainty vacuum" that non-reputable sources and unproven theories quickly filled.

A few clicks on that content, and the search engine or social media algorithm surfaces that user more and more of the same, trapping them in an ideological bubble.

So there have been structural forces allowing conspiracies to flourish. But there are also psychological ones.

As Mark Lorch, Professor of Science Communication at the University of Hull, previously explained via The Conversation, our belief in conspiracy theories is largely due to: a) our desire to impose structure on the world and regain a sense of control, and b) our "incredible" ability to recognise patterns.

"The ability to see patterns was probably a useful survival trait for our ancestors," he wrote. "But plonk the same tendency in our information-rich world and we see nonexistent links between cause and effect — conspiracy theories — all over the place."

From among countless YouTube clips, forums and like-minded websites, Julia's partner, for example, believes he has identified a pattern of corruption and mass manipulation.

"He's extremely intelligent and quite emotionally intelligent, too... And I can see how upset it makes him when I won't listen to him. Because as far as he's concerned, he's trying to help me or save me or protect me," she said.

One of the challenges when a loved one spouts conspiracies is how to respond.

Research shows that arguing over facts and myths is ineffective. In fact, presenting corrective information to a group with a strongly held belief can strengthen their view (it's known as "the backfire effect").

Julia and her partner have simply chosen to avoid the subject, or at least tread very lightly around it, for the sake of preserving their otherwise "amazing" partnership.

"It feels like a literal life or death for me. So it can be really hard for me to reconcile the idea that we have the literal opposite opinion on this and we both think we're right," she said.

"But on the positive side, I think dating him has made me more open-minded."

Loving and respecting her partner, as she does, has made it difficult to observe the judgement and dismissal being waged both against and by conspiracy theorists.

"I will always try to make sure people don't invalidate him, because I don't think that's right," she said.

"I just want to encourage people to listen. You don't have to believe everything [they're saying], but try to understand where the other person is coming from."

*Names have been changed at the request of those interviewed.

Reply
Upvote
1 upvotes
Julia*, pleased that you've managed to salvage a relationship.
Also, pleased to contribute to any birth control expenses that you might be incurring.
L
laura__palmer 2 years ago