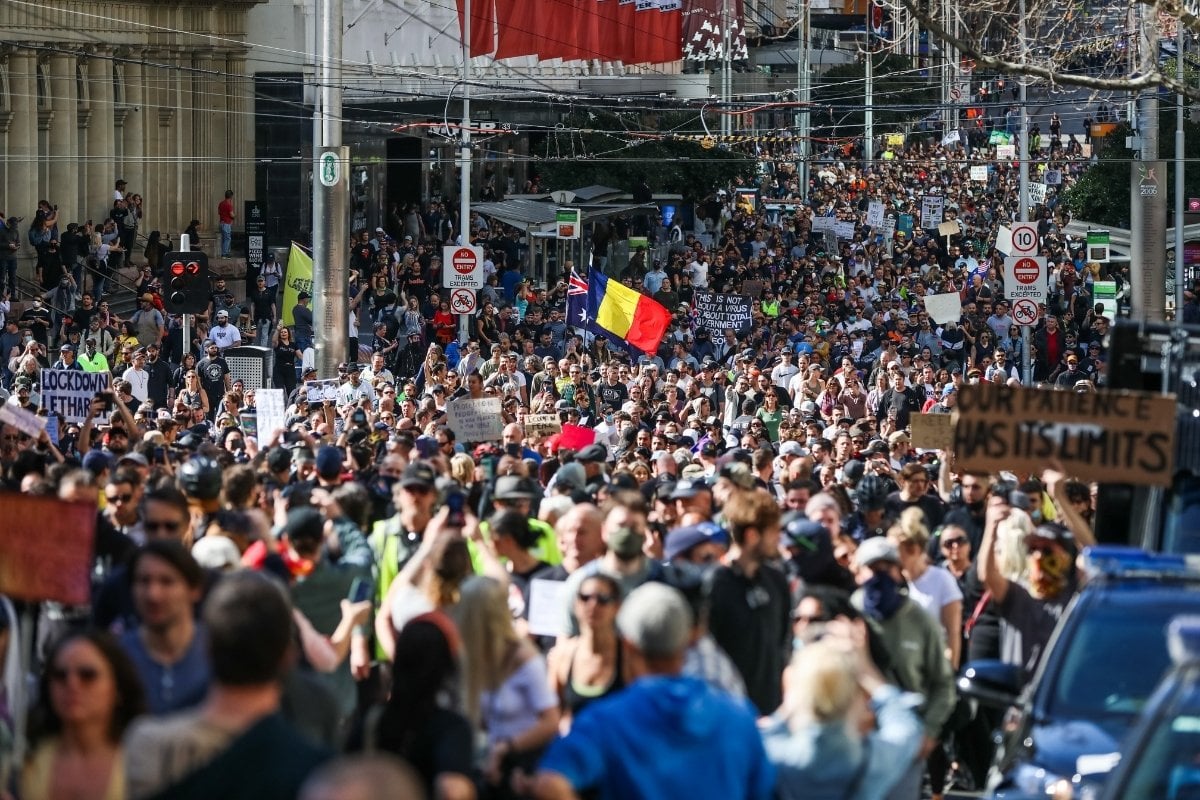 Thousands of anti-lockdown protestors gathered in Melbourne's CBD on Saturday in defiance of Victoria's stay-at-home orders.

Many of those marching did so without masks and could be heard shouting "freedom" as they snaked through the city streets. Several were carrying signs criticising Premier Daniel Andrews and promoting conspiracy theories about COVID-19 and vaccinations.

More than 700 police were deployed to the area in an effort to enforce COVID-19 restrictions.

Anti-lockdown protests were also planned for Sydney, although a heavy police presence — more than 1,500 officers — ensured it was far smaller than that seen in the city last month.

While the July protest attracted thousands, just 250 people gathered in Victoria Park before being dispersed by NSW police.

Regional Victoria to return to lockdown.

Regional Victorians will enter lockdown at 1pm on Saturday as authorities scramble to contain a COVID-19 outbreak in the northern city of Shepparton.

Victoria recorded 61 new locally acquired virus cases on Saturday, including 39 in the community while infectious. Authorities have only been able to link 48 of the cases to known outbreaks.

An additional 16 cases have been detected in Shepparton via rapid testing and will be included in Sunday's numbers.

The state's premier, Daniel Andrews, says authorities had no choice but to extend Melbourne's lockdown to all of regional Victoria.

However, regional centres won't be subjected to the curfew that's in place in Melbourne.

"Sadly, the public health team have advised that, given the Shepparton outbreak and the fact that at least one person travelled to Bendigo and potentially others travelled beyond, there is a very significant risk of transmission right across regional Victoria," he said.

Mr Andrews said the risk was not simply confined to the Goulburn Valley area and a statewide lockdown — at this stage until September 2 — was the only option.

He also announced new restrictions for access to child care, which will move to a permit system. Only vulnerable children and the children of authorised workers will be able to access child care.

NSW has reported 825 new locally acquired cases of COVID-19 — the highest daily total recorded by any Australian jurisdiction since the beginning of the pandemic.

The state also recorded three more deaths. A woman in her 90s from southwest Sydney died at Liverpool Hospital, and two men, one aged in his 80s and the other in his 90s, died after contracting their infections at Greenwood Aged Care in Normanhurst.

The entire state is now locked down and a police blitz is underway to enforce tough new regulations and increased fines as authorities battle to contain the spread of the virulent Delta strain of the virus.

The persistently high numbers have led Premier Gladys Berejiklian to prolong stay-at-home orders in Sydney until at least September 30 and impose harsher rules on a dozen hotspot local government areas, including a curfew from 9pm to 5am.

Residents in those council areas in the city's west and southwest are from Monday limited to one hour of outdoor exercise per day.

Hardware stores like Bunnings, office supply stores and other retail premises must close in those 12 areas except for click-and-collect, and all exams and education activities must move online, excluding the HSC.

"We urge everyone in [the western and south-western suburbs at the centre of the outbreak] to appreciate that every day they set foot out of their house, they should assume they're going to come into contact with somebody who has the virus," said Premier Gladys Berejiklian.

"And that is a fact, it's not just an assumption."

A permit system will from Saturday also come into force for people travelling between Greater Sydney and regional NSW, which is in lockdown until at least August 28.

And from Monday, mask-wearing will be mandatory for all people in NSW when outdoors, except when exercising.

Good news for the ACT's outbreak.

The ACT has recorded eight new locally acquired cases of COVID-19, all of which were in isolation for the duration of their infectious period.

The territory is in lockdown until at least September 2, after a cluster of cases of the Delta variant emerged earlier this month.

ACT Health Minister Rachel Stephen-Smith said the lack of positive cases in the community was a sign that stay-at-home orders and contact tracing are working.

"This is absolutely where we wanted to get to, but I'd issue a word of caution for Canberrans not to get too overexcited, because this is one day. And it is likely that we will see new cases over the next couple of days that had some period where they were infectious in the community," she said.

The new cases — 18 from Auckland and three from Wellington — is NZ's worst day for community transmission since April 2020.

NZ is on day four of a national lockdown that will last for at least seven days — and probably much longer — as Jacinda Ardern's government strives to execute its elimination strategy.

"We've always said cases would rise before they fall. We do expect cases to continue to rise through to next week before they start falling away," she said.

Reply
Upvote
2 upvotes
I've said it before, and I'll say it again - bugger.  Just when we thought we were out, they pull us back in. It just feels neverending. I think I'm going to be melodramatic about this one, and take to my bed for a while. It's a shame I don't have one of those marabou-trimmed robes to flounce around in, really go for the Old Hollywood drama. 😉

Reply
Upvote
1 upvotes
@rush and I've just seen my cousin comment "wish we could be there" on a clip of the Melbourne protests. Jesus Christ, I knew she was a bit of an odd duck, but this is depressing.
C
cat 9 months ago