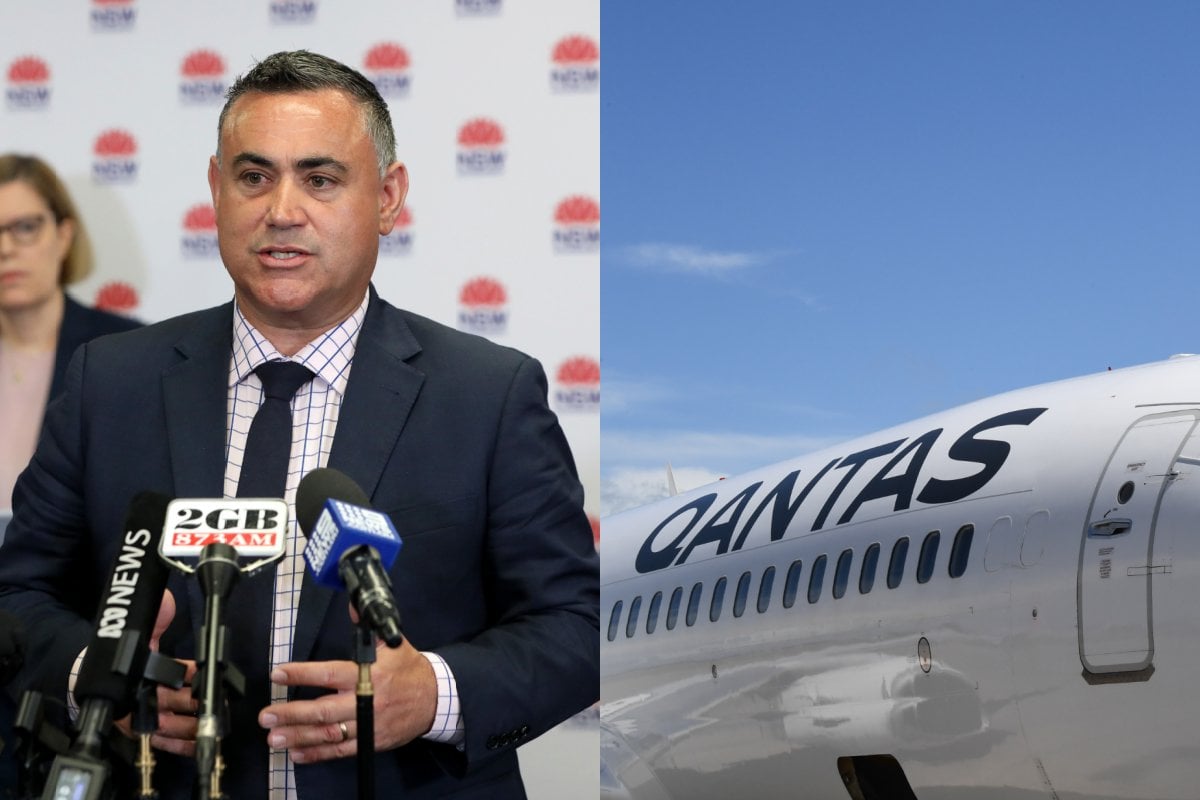 One was a household contact in Avalon on Sydney's Northern Beaches and two are under investigation, though Dr Kerry Chant said it was "likely" one of those cases is linked to the Berala cluster.

The fourth case was reported yesterday, and was the 18-year-old man who travelled to regional NSW towns of Orange, Nyngan and Broken Hill.

A fifth case was recorded in hotel quarantine.

There were 32,667 tests reported to 8pm last night, compared with the previous day’s total of 26,391. NSW Health thanks the community for raising testing numbers and urges everyone throughout the state to continue to come forward with even the mildest of symptoms.

The teenager's summer camping trip has put several regional NSW communities on high alert after he tested positive for the coronavirus.

The 18-year-old visited the Berala BWS bottle shop in western Sydney, now the centre of a 15-strong COVID-19 cluster, on Christmas Eve.

He then travelled with friends to the regional NSW towns of Orange, Nyngan and Broken Hill - almost as far as the state's western border.

The teen's positive result came back on Tuesday. He'd first been alerted to the risk when received an alert from NSW Health about his bottle shop visit and developed a sniffle.

Orange's Birdie Noshery and Nyngan's Riverside Tourist Park are now subject to health alerts, with more venues expected to be added to the list.

While it’s encouraging to see NSW‘s COVID testing numbers rise in recent days, we need these numbers to further increase.

If you have even the mildest of symptoms, get tested.

If you have returned a negative result and feel sick later, get tested again. pic.twitter.com/goFbPNpBTd

Authorities on Tuesday night also issued alerts for a number of venues in Sydney's west including Merrylands RSL and an Indian restaurant in Parramatta on December 28 and the Sydney Murugan Temple at Mays Hill on New Year's Day.

Alerts were also issued for a social cricket match at Ollie Webb Cricket Ground in Parramatta on December 28 and a Pendle Hill seafood shop on January 3.

Dr Chant reiterated a call for anyone who went to the BWS or Woolworths in Berala between December 20 or December 31 to check NSW Health's website for testing advice.

The latest venues, dates and times of these exposure sites are always available to view on the NSW Health website.

Residents from Berala and surrounding suburbs will be banned from attending the upcoming Australia-India cricket Test at the SCG due to the outbreak.

Victoria has recorded one new locally acquired COVID-19 infection on Wednesday, from 37,500 tests.

There were 3 cases notified to the department in the past 24 hours. This includes 1 locally acquired and 2 in hotel quarantine. 37,509 test results were received. Thanks - #EveryTestHelps.
More later: https://t.co/lIUrl0ZEco #COVID19VicData pic.twitter.com/HEwucHt1rL

The latest outbreak in Victoria includes 27 local cases, all linked back to a Thai restaurant in bayside Melbourne.

More than 1300 close contacts of those affected are in quarantine as health officials work to limit the spread.

Genomic testing has linked those cases to a cluster on Sydney's northern beaches, one of several being managed by authorities in NSW.

A Melbourne man infected with the virus attended the Boxing Day sales at Chadstone Shopping Centre and day two of the Australia-India cricket Test at the MCG.

Where the man acquired his infection is a mystery.

If you attended the MCG on Dec 27, seated in The Great Southern Stand, Zone 5, between 12.30pm - 3.30pm, you must get tested & self-quarantine until you get a negative result.

Acting Premier Jacinta Allan said health authorities don't believe the man in his 30s was infectious during his visit to the MCG on December 27.

But people seated in the Great Southern Stand's zone 5 between 12.30pm to 3.30pm have been asked to get tested and self-isolate.

A day before, the man attended the Boxing Day sales at Chadstone Shopping Centre from 6am to 2pm.

He developed symptoms on December 30 and contact tracing has revealed he had stayed home and self-isolated since New Year's Eve.

Both the MCG and Chadstone Shopping Centre have now been listed as potential exposure sites.

The Victorian government also announced on Wednesday that the return-to-work plan for the public service will be paused for a week.

The public service was due to move into the next phase of return to work from Monday - increasing office capacity to 25 per cent, ahead of a jump to 50 per cent on February 8.

The outbreaks earlier prompted a tough new border policy, which has left thousands of Victorians stranded on the wrong side.

There were 2798 exemption applications by Tuesday, with just 57 approved.

Prime Minister Scott Morrison said the federal government is willing to provide support for a pathway to get Victorians home.

But Victorian Police Minister Lisa Neville said there will be no change to the exemption policy.

"There is a tough exemption process to pick up those who are facing the hardest hardship," she said.

"But otherwise we've had to make this decision to protect what we've all built together. We don't want to go backwards."

The federal government has brought forward the rollout of a vaccine for COVID-19 by a couple of weeks to early March.

"The last thing we want is any problems where people don't want to take it because then the vaccine won't work." The Health Minister is now aiming at early March for the first release of the COVID-19 jab, but debate still surrounds the vaccine rollout. #9Today pic.twitter.com/jtZrVfdpLL

The previous timetable was for late March.

"In the same way that ­[medical] advice has allowed us to bring forward the time from the first half of the year to late March, and now early March, we will be guided by the medical advice," Health Minister Greg Hunt told The Daily Telegraph in an interview.

Mr Hunt also said the rollout would begin with the vaccination developed by Pfizer and Germany's BioNTech, with priority being given to front line workers in health care, hotel quarantine and border management.

Elderly people in aged care homes will also be amongst the first Australians to get the jab, pending its approval by Australia's Therapeutic Goods Administration.

Hunt also said up to 80,000 doses a week will arrive in Australia from later this month.

The second major vaccine candidate - developed by AstraZeneca and Oxford University - is expected to be available for use in Australia by end-March.

Qantas has brought forward international ticket sales for destinations including the US and UK despite growing coronavirus rates overseas.

As vaccines roll out across the world, tickets have gone on sale for as early as July.

Sales had been suspended until October this year, after the airline giant's chief executive Alan Joyce said it was unlikely international travel would go ahead at all this year.

"Recently we have aligned the selling of our international services to reflect our expectation that international travel will begin to restart from July 2021," a spokesman told AAP on Tuesday.

While tickets are on sale, the airline said the resumption of international flying will still be subject to vaccine rollouts and border rules.

Deputy Prime Minister Michael McCormack has released a statement saying that it will be the Australian Federal Government who decides when international borders come down, not airlines. #9Today pic.twitter.com/hD1Y2urjjY

Deputy Prime Minister Michael McCormack said while ticket sales are a commercial decision for airlines, it's for the government to decide when international travel resumes.

"International borders will be reopened when international arrivals do not pose a risk to Australians," he said in a statement on Tuesday.

The government is working on travel arrangements between countries with low community infections, including New Zealand, he said.

WHO 'disappointed' at China entry delay.

The head of the World Health Organisation says he is "disappointed" that Chinese officials haven't finalised permissions for the arrival of a team of experts into China to examine origins of COVID-19.

"Today we learned that Chinese officials have not yet finalised the necessary permissions for the team’s arrival in #China. I am very disappointed with this news given that two members had already begun their journeys & others were not able to travel at the last minute"-@DrTedros

Tedros Adhanom Ghebreyesus, in a rare critique of China, said members of the international scientific team began departing from their home countries over the last 24 hours as part of an arrangement between the WHO and the Chinese government.

"Today, we learned that Chinese officials have not yet finalised the necessary permissions for the team's arrival in China," he told a news conference in Geneva.

"I'm very disappointed with this news given that two members had already begun their journeys and others were not able to travel at the last minute but had been in contact with senior Chinese officials," he said.

Tedros said he had "made it clear" that the mission was a priority for the UN health agency and that he had been "assured that China is speeding up the internal procedures for the earliest possible deployment".

"We are eager to get the mission underway as soon as possible," he said.

The experts, drawn from around the world, are expected to visit the city of Wuhan that is suspected as the place that the coronavirus first emerged over a year ago.

The Grammy Awards ceremony set for January 31 has reportedly been postponed due to the coronavirus surge in Los Angeles.

Citing multiple sources, both Rolling Stone magazine and Variety say the ceremony, the highest awards in the music industry, may take place in March.

The Recording Academy, which organises the Grammys, and broadcaster CBS are yet to comment.

os Angeles is experiencing a spike in coronavirus deaths and hospital admissions. Gyms, hair salons and restaurants have been shut and residents urged to stay home as much as possible.

The Washington Post reported that hospitals are so overrun, ambulance crews have been told to ration oxygen and to stop transporting patients with low survival chances.