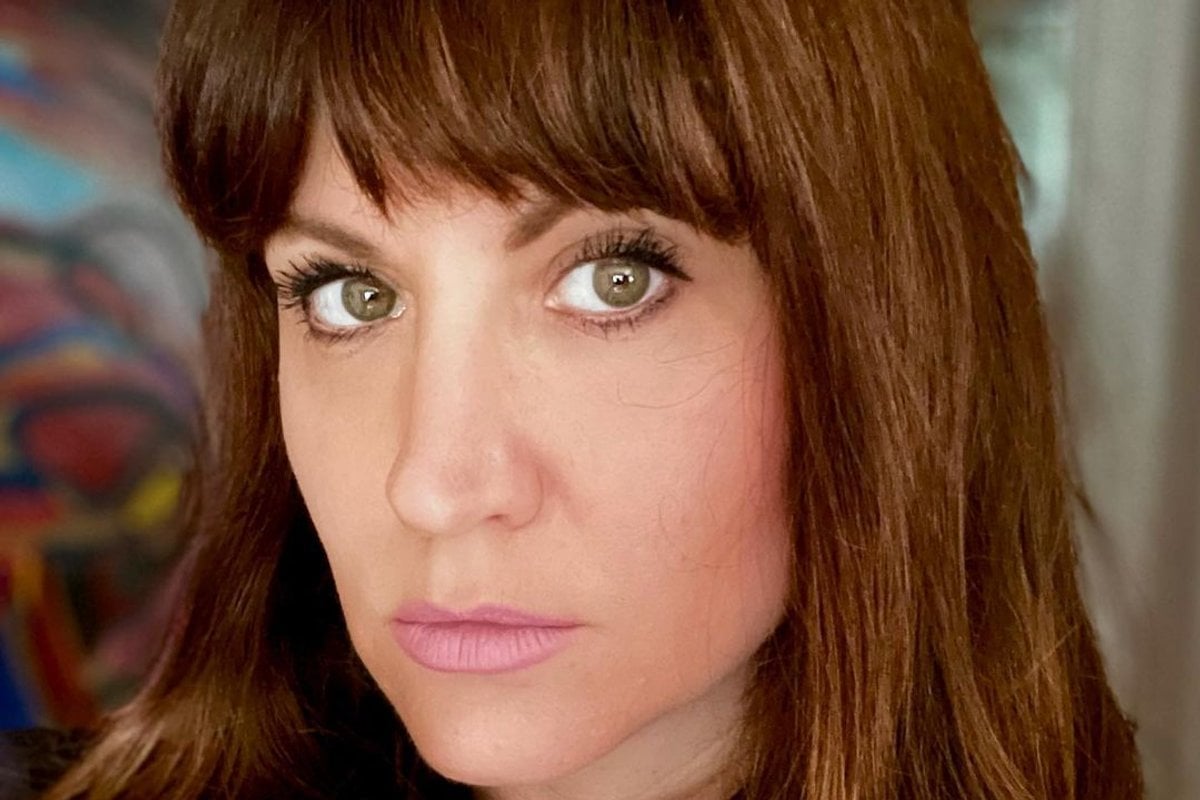 When writer Rebecca Woolf finally decided to end her unhappy marriage to Hal, the father of her four children, she discovered that Hal was dying.

"Two years before the doctors diagnosed Hal with terminal cancer, we were preparing to end the marriage," Rebecca tells Mia Freedman on this week’s episode of No Filter.

"We were avoiding each other, we hadn't had sex for years, and I wanted out. He had been emotionally abusive, and it was not sustainable. When he told me he had stomach pains, I literally thought, 'Good. F**k you'. I had such hatred for him."

Watch: Robin Bailey on losing her dad at a young age. Post continues below.

Hal took himself to the emergency room, while Rebecca stayed home with their kids.

After some investigation and scans, Hal rang home at 4am with the news he had stage four pancreatic cancer.

"I remember the doctors saying he had likely had cancer for 10 years and I thought that I must be a witch - that I must have wished it on him and that somehow it was my fault," Rebecca told Mia.

"I think that a lot of those thoughts were to do with our marriage and how along the way I had internalised the idea that I must have always done something wrong."

Despite all that had happened before that early morning phone call, Rebecca found her wedding ring and went into the hospital to stay with Hal and advocate for him as his primary caretaker.

"It was so strange. One day I was done and over our relationship, the next day I am literally Hal's death doula. I had to go deep and access another part of myself to do it, but I did it and now looking back I have no regrets."

When Hal died four months later, it was a strange time for Rebecca. While she experienced grief, she says that the empathy people gave her as a widow was strange.

Listen to Rebecca Woolf's entire chat with Mia Freedman on No Filter. Post continues after audio.

"I had finally said I was going to leave Hal, but it ended up being a passive end that I had no control over," she shared.

"Being a divorcee is very different to being a widow and the fact people had all this empathy for me felt complicated. Close friends understood."

Rebecca became Hal's power of attorney and threw herself into managing her kids' grief.

"It wasn't really my place to grieve, so I did what needed to be done and then I was all about the children's grief and supporting them. They have been amazing throughout everything - he was their father, but life with Hal was not always easy for them.

"So much came up for all of us after he died. There was a real tangle of feelings to work through. It is heartbreaking to say but you can love someone and not miss them when they're gone. The house instantly became so much calmer as we didn't have to walk on eggshells any longer."

The mix of emotions around facing Hal's death while still processing the trauma of their lived relationship was tough for Rebecca.

"It is possible to love someone but be so grateful that you don't have to deal with them anymore. It is valid to feel angry and relieved - all of that is so healthy and natural but we don't always allow ourselves to feel it," she said.

As a widow at just 37 years old, Rebecca initially vowed to stay single. She said she had no interest in a new domestic partnership.

"A few weeks after Hal died, I was ready to date, but I felt guilty so I waited a couple of months. I am human and I hadn't had sex in over two years!

"I had a year of casual experiences which allowed me to question the type of relationship that would work for me. I really thought about whether I could keep my home life separate to my love life and I decided I could. Keeping it separate has made me a better mother."

Rebecca also found a new side to herself while exploring new relationships.

"I realised that sex for me had always been about pleasing everyone else. I would pride myself on being good at giving blow jobs and it was all about the performance; asking what the other person was into and not thinking about my own pleasure.

"I also fell in love with a woman, which was a first time for both of us as I had never been with a woman without a man watching, and neither had she. I never knew love and sex could feel this way! It was emotional and intense."

Rebecca identifies as pansexual and has since begun an open relationship with a man. She is secure in herself and happy living her life with the ongoing support and love of her four kids.

"Right now, I love this man and I choose him, but I can imagine my future with a woman. I don't believe in monogamy and the rules and labels of conventional relationships freak me out.

"My kids know about my relationships and they bust my balls when I go out on a date and come home with lipstick all over the place. They laugh and say 'nice face'!

"We live in LA and for their generation, gender and sexuality are constructs and its all fluid. They see me as this boring and conventional mum!"

Rebecca Woolf explores her grief journey in her upcoming memoir, All of This: A Memoir of Death and Desire, which will be available online and in all good bookshops from August 16, 2022.

For more of Rebecca's story, listen to No Filter on the Mamamia app or via your preferred podcast platform.