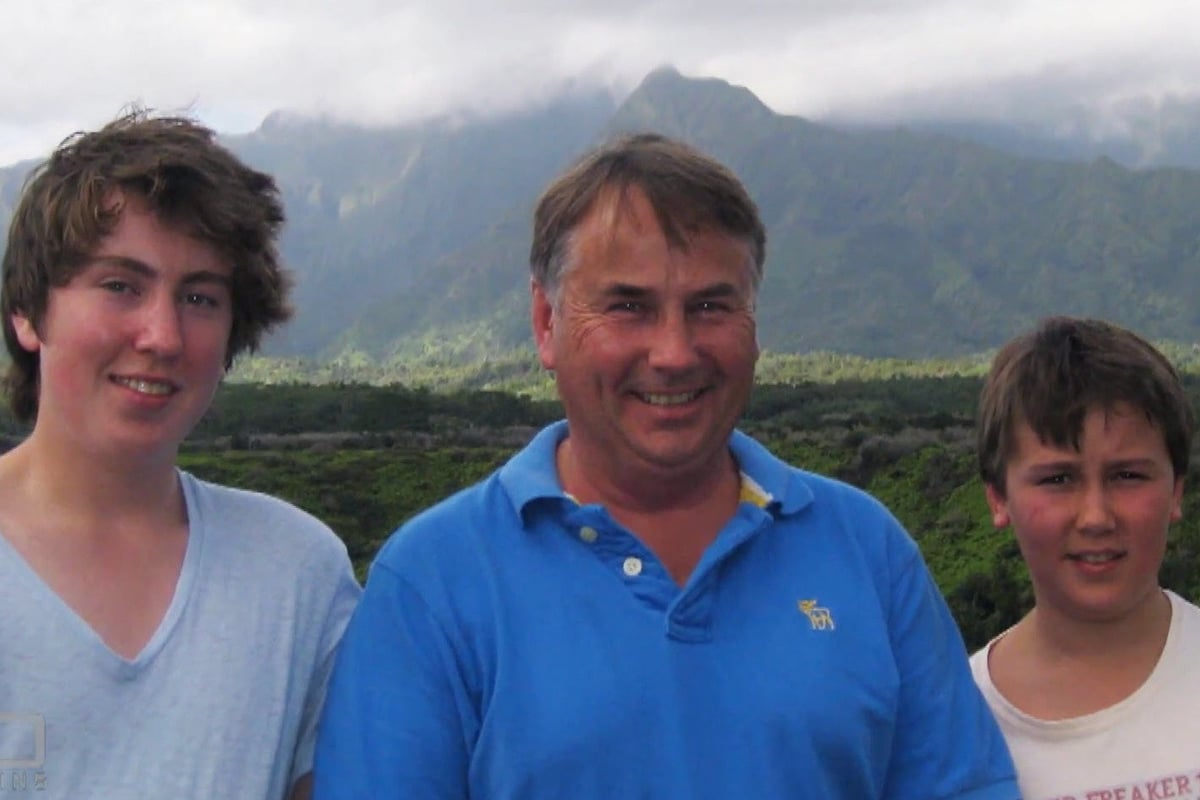 This article contains discussions of suicide and may be triggering for some readers. For 24-hour mental health crisis support, please call Lifeline on 13 11 14. A trained crisis supporter is ready to take your call.

There is a platitude we like to repeat for grief and trauma: "Time heals all wounds," we say. We may think it's about making those who are sad feel better, to remind them of brighter horizons ahead. But repeating something doesn't make it true, and some wounds simply don't heal.

Ralph and Kathy Kelly's eldest son, Thomas, was killed in a random one punch attack in Kings Cross in 2012. The attack became the catalyst for Sydney's lockout laws.

Four years later, in 2016, their youngest son Stuart took his own life. He had dropped out of university six months prior, following a hazing incident at St Paul's College on the University of Sydney campus.

Thomas and Stuart were both 18 at the time of their deaths.

"People think time heals. I think for a parent it does, I got through [the death's of his parents] thinking they had lovely lives and it was fantastic to have them as my mum and dad. For a child, I don't think it ever leaves you," Ralph told Mamamia this week.

In 2017, Mia Freedman spoke to Kathy Kelly about the deaths of Thomas and Stuart. Post continues below video.

His grief hasn't 'evolved', or moved on. It's still there, just as much as it was directly following Thomas and Stuart's deaths. That same level of grief was with him when he was turning off Thomas' life support, identifying Stuarts' body, picking up their ashes and driving home with them in the back seat, with the same overwhelming need for carefulness he felt when driving home from the hospital with his newborn babies.

"Losing a child is completely different, so I've tried to reframe it in my mind that I had 18 years with both of them," he says.

"For me, I was incredibly grateful and incredibly lucky that I had two fantastic young boys, who I loved dearly. It's better that I had that time with them than no time at all. Even the annoying parts when they were growing up are now fond memories. I look back and think I shouldn't have got annoyed, because actually that was really funny at the time.

"It hasn't changed at all. It's as hard today as it was when both the boys died."

After the death of Thomas, Ralph attended a support group retreat with 12 other dads.

They all had one thing in common: Homicide.

Over the course of the weekend, Ralph got to know the other men. They were lovely, genuinely good people. But so many conversations naturally turned towards death and grief. He learned about the trauma of the 11 other fathers. In two of the most affecting stories, the fathers spoke about how their daughters were murdered by their partners in domestic violence incidents. 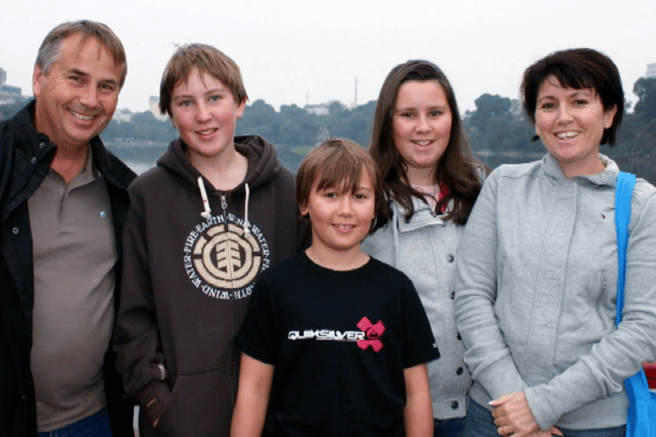 Then there came the time the Kellys filmed a 60 Minutes segment, alongside Turia Pitt, the parents of Daniel Morcombe, Lindt Cafe siege survivor Louisa Hope, and others using grief and trauma to spur societal change.

"We were having dinner on the first night, and the conversation always goes back to 'the journey'," Ralph recalls.

"Michael Usher was the reporter for 60 Minutes in those days. I was sitting next to him and I said 'Michael, I'm really sorry but I have to leave. I can't manage this. To be honest with you, I can't deal with it anymore'."﻿

There is something about loss that creates an uncomfortable sense of comaraderie. After learning about Thomas and Stuart's deaths, people would share their own grief with Ralph.

Maybe it was a sense of empathy, or feeling 'seen' enough to open up about topics society is still uncomfortable discussing. Whatever the reason, people spoke to Ralph about their own experiences with tragedy, suicide, and mental health.

Some would talk about how their dog had died, or their parent who'd recently passed. 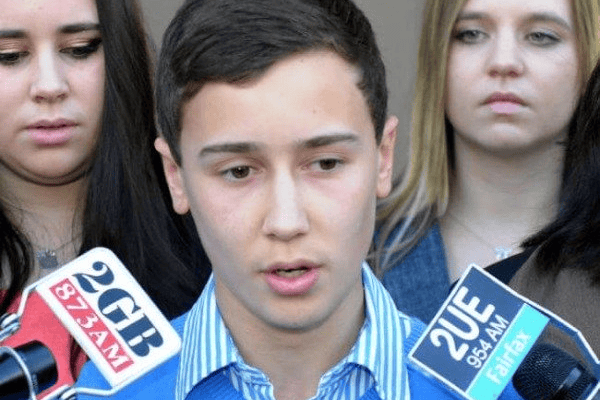 In 2014, Stuart Kelly spoke to the media outside court after the sentence appeal hearing for Thomas' killer. Ralph said he could not believe his son's courage. Image: AAP.

But that is a heavy burden to carry.

"It feels like a weight. I actually feel like I am suffocating or drowning," Ralph says when asked about the emotional toll of managing not only his grief, but hearing about others' too.

"It actually is that bad, and I can feel myself get really hot, just going to another place that I don't want to go to."

Grief presents itself differently for everyone. Ralph talks about 'emotional numbing', describing it as shutting down "all your feelings in order to survive".

He and Kathy cope differently. Ralph likes solitude. He goes for walks along the beach, or in a park with the dogs. He doesn't really talk about his sons or the Stay Kind foundation which keeps him busy, unless it's brought up by somebody else. Kathy is the opposite.

Their daughter Madeleine, 25, has recently moved out of home, where photos of their three children line the walls.

He worries about having let her down as they can't talk about her brothers. She takes after him.

"Madeleine doesn't talk about them, she's a bit like me and she shuts down. She did say one day 'I just feel like they're overseas, and one day I'll see them again'. She has a tattoo on her arm, representing the three children - Tom, Stuart and herself. And we were overseas once in Europe, she took a photo, standing on a balcony, of her arm, saying 'I'll take you to every corner of the world'."

People often worry about how to act around someone who has experienced pain or is grieving. We tiptoe around them, not wanting to offend or say the 'wrong' thing.

For Ralph, the greatest comfort comes not from words, but from something much simpler.

He recalls two memories. The first was when an acquaintance approached him at a work conference.

"He walked over to me and he just put his arms around me and hugged me, which made me cry. He said 'I'm thinking of you', and he walked away."

More recently, just before COVID-19 restrictions came into place, Ralph and Madeleine were waiting for service at an Apple store in Sydney when a stranger appeared.

"This guy, I have no idea who he was, just walked over and put his arms around me and said 'Thank you for what you do, please keep it up'. He just walked straight off," he recalled.

"I think a hug says a million words. It shows you that the person cares. It's the closest thing you can probably receive." 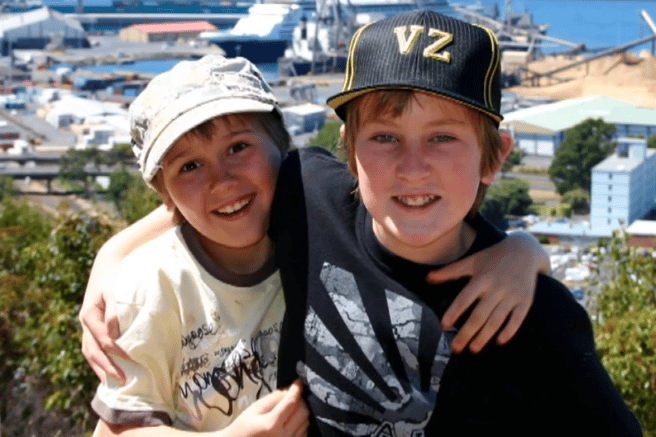 Both Thomas and Stuart died in the month of July.

After Thomas' death, Ralph and Kathy founded the Thomas Kelly Youth Foundation. In 2019, this evolved into Stay Kind - named for Stuart's initials - which campaigns for behavioural change in the community in relation to violence, bullying, hazing and suicide.

The foundation's Take Kare Safe Spaces initiative operates every Friday and Saturday night in the Sydney CBD, with ambassadors out on the streets ensuring people are safe and well. It has led to over 72,000 interventions between December 2014 and February 2020. The City of Westminster, London, replicated the initiative in 2018.

Behind-the-scenes, the foundation works with businesses, schools, universities and other organisations to instill kindness at every level, embedding it in every part of our culture.

do something kind this July! Check out the Governor General of Australia and Patron of Stay Kind message on Kind July on our website http://ow.ly/onDr50Amn47. Each day during Kind July we will be inviting you to perform a simple everyday act of kindness which can change a persons day and save someone's life. Kindness is proven to be contagious and you get to feel good to! Share and inspire on #kindjuly or on our Stay Kind Movement FB page. Be a Kindness Champion in your workplace, school or community. Pledge your simple everyday act of kindness on staykind.org or find out more on how you can get involved!

And that is where we all come in.

Stay Kind's 'Kind July' initiative is asking every Australian to perform an act of kindness each day.

"We can all be kind occasionally, but you have to stay kind," Ralph explained.

"Staying kind is about getting up every day and saying to yourself, 'Okay, I've got to be kind'. Every day. It's about watching people around you and observing people. It can be something simple like smiling at a stranger, helping a mum with a pram open a door, help people with shopping bags. There's a plethora of things you could do."

And if we all did this, every day, it would account for 775 million acts of kindness in just this one month. If we did it every day, that accounts for 9.3 billion each year.

It's not possible to overstate the impact this would have. Not only is spreading kindness good for your own mental health and wellness, but enough of it can change every part of society.

Ralph explains it best: "If we had kindness, both Tom and Stuart would be alive".

You can make a pledge of kindness on the Stay Kind website. Kind July asks every Australian to make a conscience decision to make at least one act of kindness per day, because kindness is contagious - and it can change the world.

Reply
Upvote
1 upvotes
Oh how I wish people would not say it gets easier with time.   It doesn’t, and I’m obviously not the only one who experiences that.    What this wonderful family has had to endure is tragic and so unfair.  Stop trying to make us feel better to alleviate your uncomfortable situation.
L
laura__palmer 2 years ago