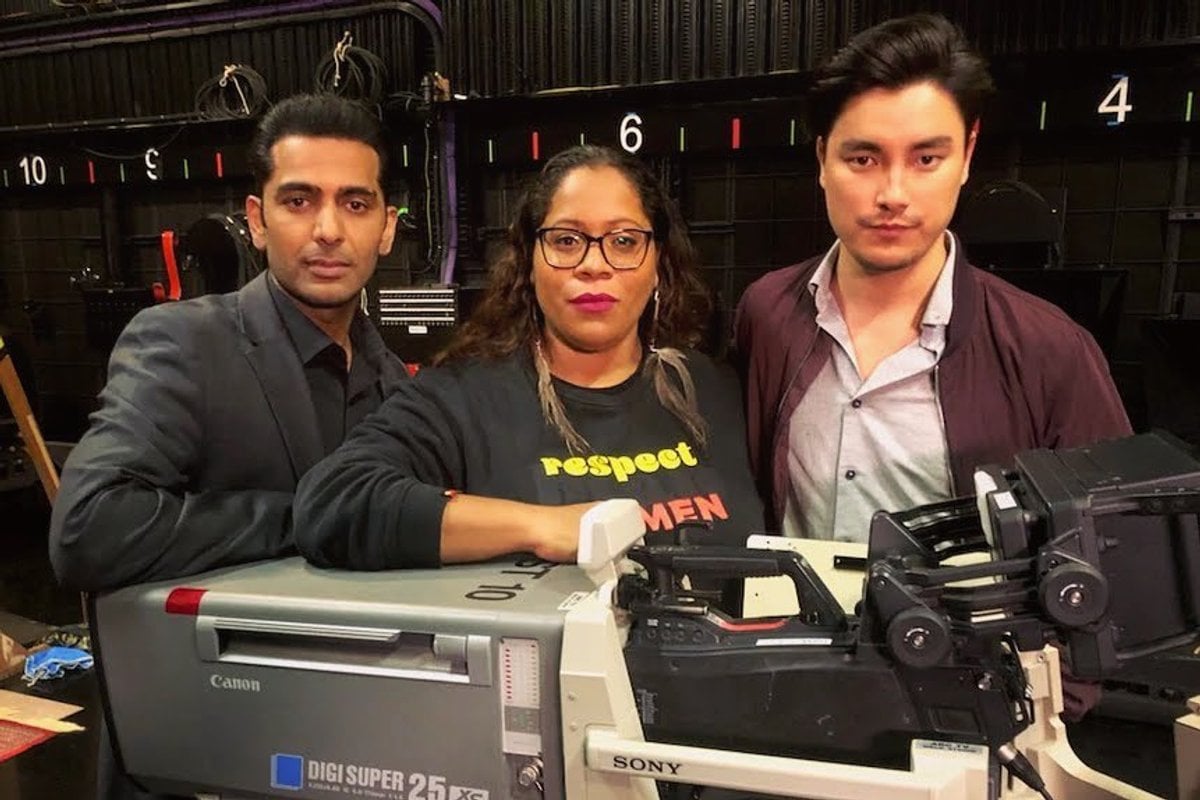 Multiple actors have come forward with allegations of racism on the set of long-running soap opera Neighbours.

"It's been lonely, triggering and traumatising to work in such a culturally unsafe space," she wrote on Instagram.

Amanda Fotheringham talks us through the awkward questions she often gets asked as a young Aboriginal woman. Post continues below.

A day later, Meyne Wyatt, who appeared on Neighbours as Nate Kinski from 2014 to 2016, alleged that he too had experienced racism on the set of the Australian drama.

"It involved the C word, and I called it out and it didn’t happen around me again," the actor shared on Twitter.

"It is disappointing but not at all surprising to hear that five years later racism continues to be present in that workplace. But what can you say, we are in Australia."

Since then, several actors have come forward with their own harrowing experiences.

As the situation unfolds, here's everything we know about the allegations.

What did the actors allege?

Shareena Clanton, who is best known for her role as Doreen Anderson in Wentworth, was hired to play a character named Sheila in yet-to-be-aired episodes of Neighbours.

In an Instagram post shared on April 6, Clanton shared she was "navigating ongoing counselling" following her experience on the "highly problematic show".

In a list of seven bullet points, the actor detailed allegations against the show, including several examples of unnamed white actors using racist slurs, including the "n-word".

When Clanton confronted an actor who had used the slur, she alleged she was told to "go somewhere else" by staff "because I was making others 'uncomfortable'".

"The retaliation for calling out this misconduct and racism often left me ostracised and further marginalised," she said.

The 30-year-old also alleged that "overt and covert levels of racism were rife" on set.

"A senior staff member openly laughed whilst using the term 'slave driver' in reference to him 'working hard'. My management at the time didn’t help as they endorsed/encouraged this 'office banter'. I fired the agent," she wrote.

"Believe the horror stories. I’ve only encapsulated some of the key things I was subjected to," she wrote.

"I didn’t have enough space to talk about the microaggressions of toxicity prevalent, the sexist and misogynistic commentary, the disrespectful and crude statements made every day, the deliberate ostracisation of those who called it out and abhorrent levels of bullying."

A day later, actor Meyne Wyatt shared his experience with racism on the set of Neighbours.

Wyatt made history on the show as the first Indigenous actor to be cast as a regular character on the Australian drama.

I was a series regular on Neighbours between 2014 to 2016 and I experienced Racism on set. It involved the C word and I called it out and it didn’t happen around me again. Though I did walk in on this incident? so I have no doubt things were being said behind my back.

I have too much experience to believe otherwise. And it is disappointing but not at all surprising to hear that five years later racism continues to be present in that workplace. But what can you say, we are in Australia.

On posts shared on Twitter, Wyatt alleged he walked in on someone using a racist slur on set.

"I called it out, and it didn't happen around me again. Though I did walk in on this incident so I have no doubt things were being said behind my back," he said.

He added it was "disappointing but not at all surprising" to read Clanton's allegations about her time on the show.

Wyatt, who played Nate Kinski on the show, claimed there was also "rampant" homophobia on the set.

"The comments and jokes and innuendos were ridiculous!" he said.

"It made for a very unsafe environment for anyone in the LGBTQIA+ community and the sh*t needs to be stamped out," he added.

"These attitudes are prevalent throughout the industry. And we are f**king tired of calling this sh*t out."

In February, Sharon Johal, who played Dipi Rebecchi on Neighbours for four years, told Stellar that she was "incessantly trolled" during her time on the show.

"I came to understand that I couldn’t escape racism, not even on Australia’s most famous street," Johal shared.

"I’m incessantly trolled on social media and sometimes even in public, with people saying things like 'go back to your country' and 'you and your filthy children need to leave Ramsay Street,'" she added.

"They also harass my family, including my non-actor husband after he did me a favour and stood in for a cast member for intimate scenes during the pandemic."

In a statement shared on her website last week, Johal shared that she experienced "direct, indirect and casual racism" during her "painful and problematic experience" on the show.

Johal, who has worked on the show for the past four years, is "one of the few people of colour to be employed as a series regular" on Neighbours.

"On more than one occasion a current cast member directly referred to me as 'you people' when speaking in derogatory terms about an altercation they were involved in with an Indian person," Johal shared.

"The same person repeatedly referred to me as 'the black one' and/or 'blackie' behind my back in the presence of other crew members," she continued.

"I have been told that the same cast member also repeatedly claims that the show only employs 'Indian actors' and diverse actors of colour to 'fill their diversity quotas' and 'not because they are any good.'"

While Johal raised the alleged incidents with management, she said "no action was taken".

The actor also detailed other alleged incidents, including a former cast member who reportedly compared her to a bobble-head toy, and repeatedly mimicked Apu from The Simpsons.

"It is clear the system has failed. My view is that a systematic overhaul is required in order to make this workplace safe for all people of diverse backgrounds," she concluded.

"Racism is part of a wider issue and conversation. It's both heartbreaking and telling of our industry that a show considered diverse on screen still struggles with protecting people these behind the scenes."

Actor Shareena Clanton, who shared her allegations against the show in early April, said that she felt "isolated" on set after reporting racism to producers.

"The racial subjugation continued. The isolation as a result was really bad," she said.

"Calling it out left me isolated, bullied, marginalised. I felt lonely and no-one knows the trauma that racism imprints into your soul."

Crazy Rich Asians actor Remy Hii, who worked on Neighbours in 2013 and 2014, shared that he faced racist backlash from viewers while appearing on the show.

Speaking to The Guardian, Hii shared that he was surprised by the public reaction to the recent allegations.

"I’ve worked in America a lot, and if anything like this came to light there, my god, heads would be rolling," he said.

"You’re talking about a ‘burn the institution down’ kind of reaction, there is no way anyone would be able to get away with it."

"It’s actually crazy seeing the kind of general public response... people who have tried to sweep it under the rug go like, it’s not that big a deal, get over it."

Speaking on 7.30, former Neighbours star Menik Gooneratne shared that she too faced racist comments from viewers over her Sri Lankan heritage.

"To receive that kind of reaction to our casting, it cut deep, and it cut deeper than I would have liked it to. I wish I was stronger, I wish I could have been incensed by the whole thing, but really I was just hurt," she said.

Gooneratne claimed while management were apologetic over the comments, they refused to remove them.

"Apart from the expression of, 'Oh, I'm sorry that that's happened,' and you know, 'Are you OK?', which they kind of checked in at the start, but because it was a continued thing it just wasn't spoken about. We didn't talk about it, we just moved on," she said.

"I didn't feel supported at all. I felt like we were left to deal with all of that on our own, to process that and to handle our reactions and our hurt and our trauma on our own."

"Don't let anyone tell you that your experiences and your truths are invalid, because you matter." - Shareena Clanton #abc730 pic.twitter.com/UUjkaa2OeK

How have Neighbours responded?

In a statement to Mamamia last week, a spokesperson for production company Fremantle Media shared: "Neighbours strives to be a platform for diversity and inclusion on-screen and off-screen. Our quest is always to continue to grow and develop in this area and we acknowledge that this is an evolving process."

The statement continued: "Shareena’s involvement in the creative process and on set was invaluable and hugely educational and will benefit the series moving forward. There have been significant and lengthy discussions with Shareena during her time on Neighbours and we will continue to work with all cast and crew to ensure Neighbours continues to be a fully inclusive environment."

Fremantle Media have since confirmed they have launched an independent review of the show.

"Fremantle is committed to providing an environment where employees and others in the workplace are treated fairly and with respect, and are free from unlawful discrimination, harassment, victimisation and bullying," Fremantle Asia Pacific’s CEO, Chris Oliver-Taylor, said in a statement, according to B&T.

"We have asked Campfire X, creative leaders in Indigenous cultural protocols, to conduct an independent review of Neighbours and the production process."

The Media Entertainment and Arts Alliance are also meeting with Fremantle Media, and recommending new anti-racism, sexual harassment and discrimination training for staff on the production.

"This is standard practice in the US," MEAA director Michelle Rae said, according to The Guardian.

"The allegations over the past two weeks of racist and discriminatory behaviour on the set of Neighbours must be the catalyst for industry-wide change to make screen workplaces safer and more inclusive."

Reply
Upvote
1 upvotes
Racism is unacceptable, workplace law applies to those legally responsible. These actors are truly brave to tell their stories. The sexist and racist comments are being made by shallow cowards.
N
natashac13 a year ago