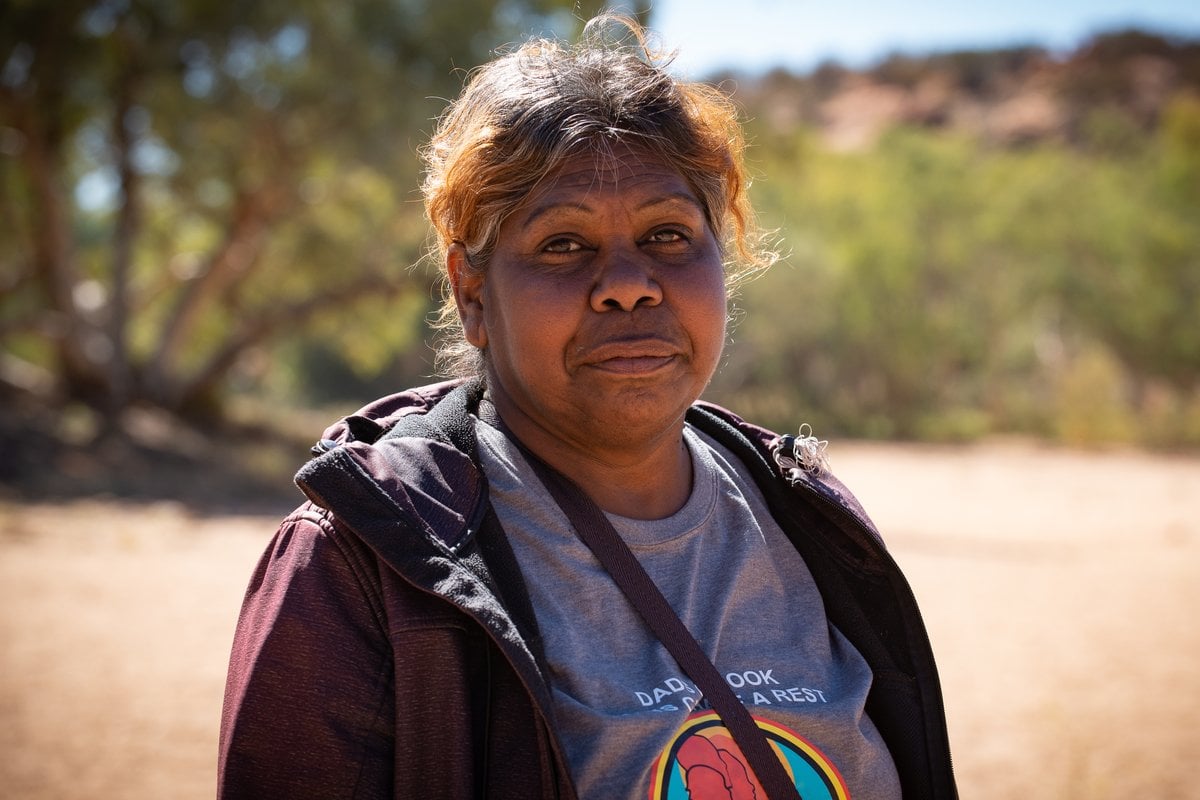 The post also deals with domestic violence and may be triggering for some readers.

For years, R Rubuntja used her voice to campaign against family and domestic violence in Australia.

She travelled to Canberra to speak to politicians, campaigned in capital cities and helped found a women's safety group.

But in January last year, the 46-year-old woman died outside Alice Springs hospital in what was considered an alleged domestic violence incident at the time.

Now, over a year later, her partner has pleaded guilty to her murder.

50-year-old Malcolm Abbott, who Rubuntja had been in a relationship with for two years, pleaded guilty in the Northern Territory Supreme Court on Friday and was sentenced to 25 years in prison without parole after he repeatedly hit her with a car in 2021.

On the day of her murder, Abbott, who she had known since childhood, was overheard threatening Rubuntja at a club in Alice Springs, the court heard, according to ABC.

After being asked to leave the club, he waited outside the entrance for Rubuntja.

At around eight o'clock, she left the club and was overheard saying that she felt scared.

Around 20 minutes later, she spoke to her daughter over the phone, telling her she was at a house known to her, and Abbott was "half killing her".

Her daughter kept calling the phone and when Rubuntja eventually answered she said she couldn't say where she was because "Malcolm (was) going to hit (her) in the car."

After hanging up the phone again, her daughter continued to call her number to no avail.

Around 9:30pm that night, Abbott, who has a history of violence against women, repeatedly drove over Rubuntja in the Alice Springs Hospital carpark, the court heard.

She died at the scene, with a post-mortem examination revealing all of Rubuntja's limbs were broken and she had suffered head injuries, broken ribs, fractures to her spine, punctured lungs and abrasions to 40 percent of her body.

When Abbott was later asked about the damage to his vehicle, he said, "I just bumped the gate".

R Rubuntja remembered as a "happy, loving" and "strong" person.

After her death, Rubuntja was remembered in an emotional vigil in Alice Springs in March last year.

Speaking to a crowd of 200 people, Shirleen Campbell, the co-ordinator of Tangentyere Women's Family Safety Group (TWFSG) - which Rubuntja was a founding member of - said she wants Rubuntja to be remembered as more than just a statistic.

"We are not just numbers, we are not invisible women," she said, according to ABC.

"Our sister, another one lost to us, is not just a number and we will not let her be invisible."

In court, Rubuntja was again remebered for who she was; a "happy, loving" and "strong" person.

In a victim impact statement read out in court, her family said the 46-year-old was heavily involved in their lives, including the lives of her nine grandchildren.

"She wanted something different for them; that they would be good people, but she also used to spoil them," the statement said.

"Now that she is gone we feel so lonely and sad without her. We think about her so much, we can hardly sleep."

The family also said her youngest son, aged 10, is "lost without her".

"It is really sad that she died this way, at the hand of her partner when she was working so hard to make that stop for other women."

Over the years, Rubuntja proved herself a prominent anti-domestic violence advocate.

As well as helping to found the Tangentyere Women's Family Safety Group, she was elected Town Camp President of her community at Anthepe Camp in 2019.

Two years earlier, in 2017, she took her advocacy work to Parliament House, speaking to politicians about domestic violence in Central Australia.

That same year, she helped organise a community march against violence.

"She helped organise and marched with us back in 2017, when we held the biggest women's march against violence in Alice Springs," Campbell said at her vigil last year.

Feature Image: Supplied and used with permission from the family.