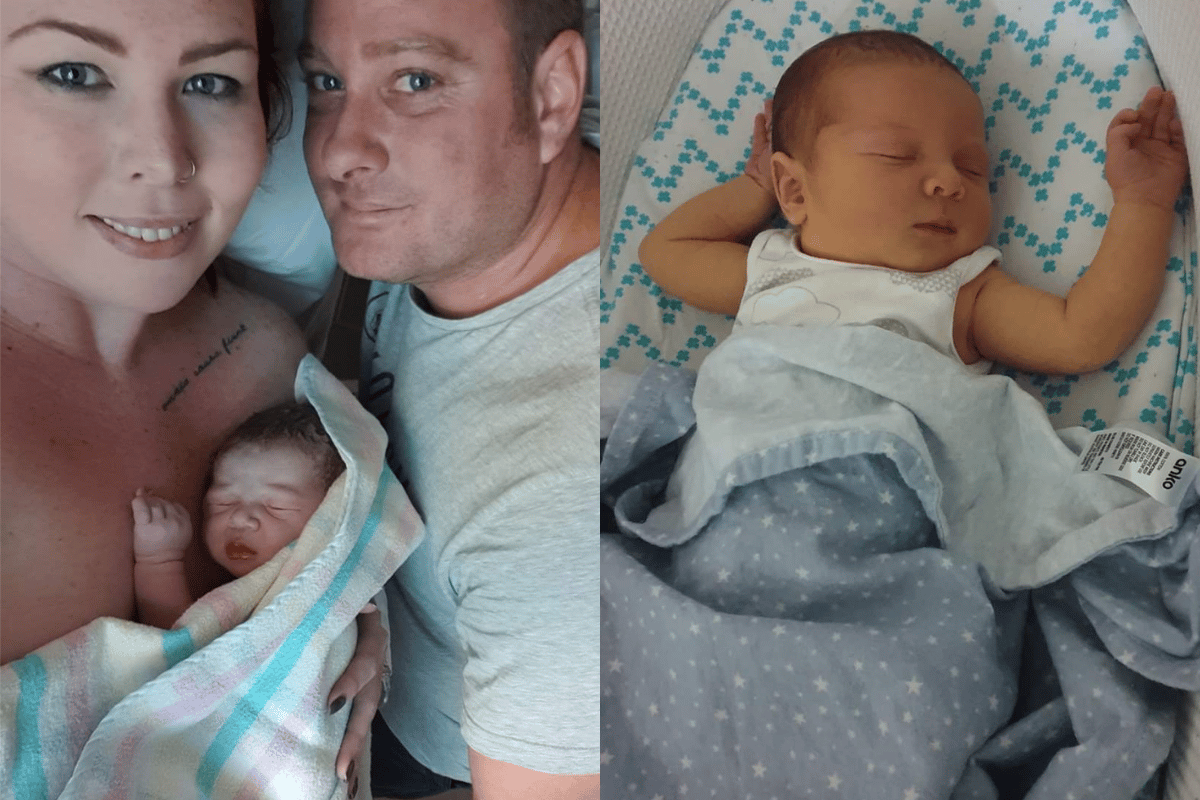 Birth: there's nothing quite like it, and it's clear no two birth stories are the same. Which is why we're asking everyday women and some of our favourite celebrity mums to share theirs, in Mamamia's My Birth Story series. To share your Birth Story, email [email protected] with 'My Birth Story' in the subject line.

This week we hear from Bec Calvert from Townsville, who is mum to almost four-year-old Dane and two-year-old Reid.

After struggling for five years to conceive eldest son Dane, Bec was surprised but overjoyed to fall pregnant with Reid while still on the pill.

Her experience of pregnancy with each son was also vastly different.

"My pregnancy with Dane was smooth sailing. No hiccups, everything went perfectly," Bec says.

"With Reid, my pregnancy was difficult. I had a lot of issues with bleeding and had to be admitted to hospital a few times to be monitored."

As her eldest son Dane’s birth was calm, empowering and quick, Bec was hopeful of the same outcome for Reid. And while baby Reid certainly made a speedy arrival on Mother’s Day in 2019, it was anything but calm!

"I was just 39 weeks pregnant and getting ready to head to a Wiggles concert with my then 17-month-old Dane. We had been waiting months for this day to arrive, and my little man was so excited!

"My partner Michael, Dane and I went to pick up my mum who was joining us, and as soon as I stepped out of the car to give her a hug, I felt a slight pain in my belly."

Putting it down to the false labour pains called Braxton-Hicks, Bec got back in the car with the family and headed to the Entertainment Centre in Townsville. Walking the 100 metres from the car to the concert, she started to feel the supposed Braxton-Hicks pains coming a little more regularly.

"By this stage I was feeling a bit more pressure, but I dismissed it as Dane had arrived three days after his due date, so I thought I had at least a week to go before this bub would make his appearance.

"We got inside the venue, climbed up a huge flight of stairs to our seats, and settled in. I had my phone in my hand ready to take photos of my very excited little boy at his first Wiggles concert!

"The stair climb had really exacerbated what I thought were Braxton-Hicks, so while I had my phone out, I thought I may as well start timing them – just in case."

A few more pains came and went and by about 20 minutes into the concert, Bec knew it wasn't just Braxton-Hicks.

"My contractions started coming hard and strong. I remember thinking I was going to give birth during, 'Fruit Salad Yummy Yummy.'

"At one point while I was mid-contraction and timing it on my phone, the lovely woman next to me leant over and asked if I was okay and if I needed her to call an ambulance.

"She said that she noticed my contractions were starting to get closer together and more intense. I thanked her, but told her there was no way I was going to leave before the concert ended and break my little boy’s heart."

While toddler Dane was having the time of his life, oblivious he was about to become a big brother, Bec was quite literally squeezing her knees together and mentally telling the baby to stay inside a bit longer.

"Once the concert was finished, we all rushed to get out, stopping halfway down the steep staircase to hang on to the handrail and get through another strong contraction. My partner Michael was holding on to me too, just in case.

"By this point, I honestly thought I was going to give birth at a Wiggles concert. The contractions were so strong that each time one came, I was just waiting for my water to break in a dramatic scene-from-a-movie style!

"We got outside, my mum found me a chair and Michael ran - and I mean ran. I've never seen him run that fast to get the car."

By this point, another two ladies asked Bec if she would like them to call an ambulance - which she declined, as she didn't want to make a big deal out of it or take away from Dane’s first Wiggles concert.

Once she was safely in the car with partner Michael, the pair dropped Bec’s mum home with little Dane in tow. 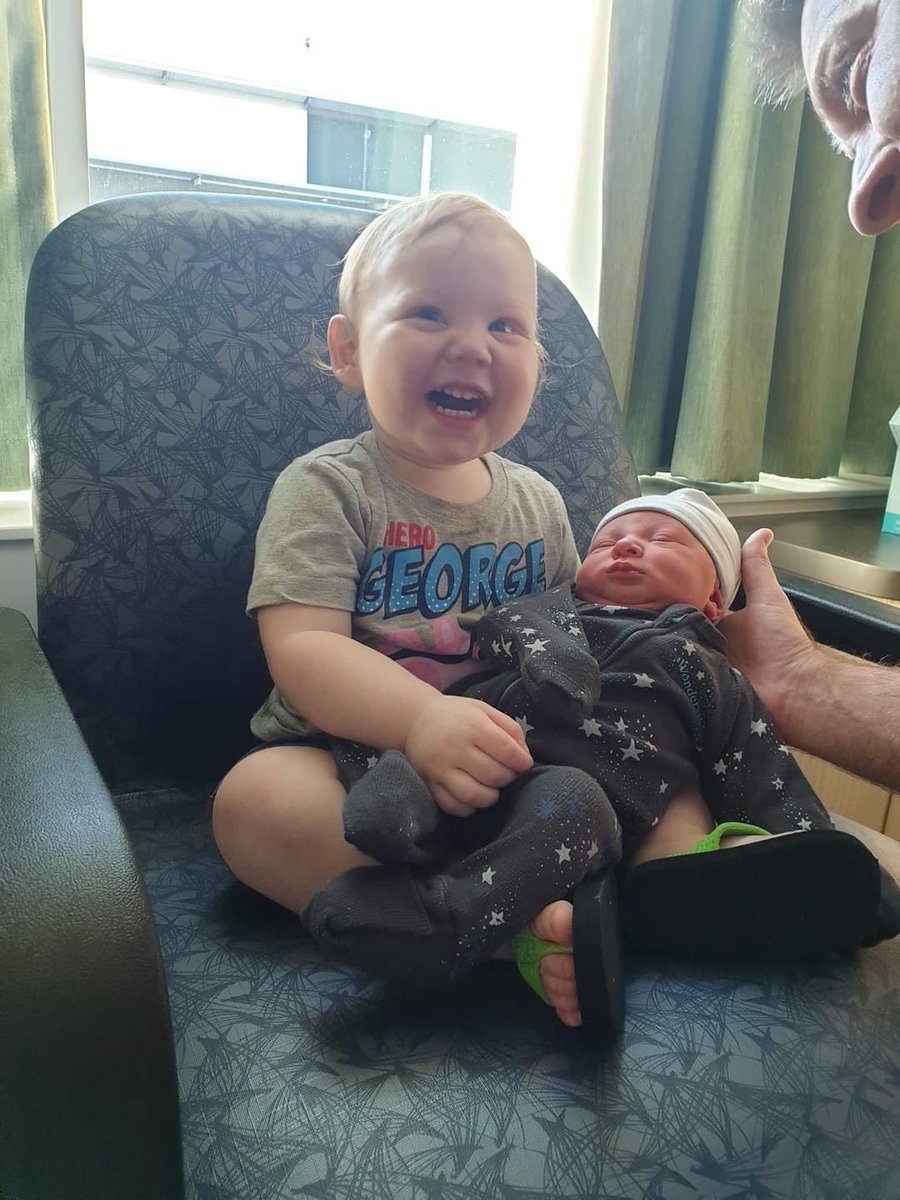 "I hugged my baby goodbye, knowing this would be our last cuddle with him as an only child. Soon he would be a big brother and our world would be changed forever.

"We got to the hospital, and I was rushed into the delivery room where the midwife checked me saying I was 'only 4cm dilated' and would still have a while to go.

"At that moment, she accidentally broke my waters and my baby started crowning. He was out within three pushes and straight into my arms!

"We named him Reid, but to this day we still joke about what we may have called our son if he had decided to come during the concert - my favourite was Henry (the octopus)."

Bec and new baby Reid then spent two days in the hospital because he had meconium in his waters so they wanted to watch for signs of infection. Bec had a second degree tear because the birth was so fast but she otherwise recovered well. As soon as they both got the all clear from the medical team, Bec and Reid headed home.

"I had a lot of mum guilt at the start as Dane was still so young and I felt bad not being able to give him my full undivided attention anymore. But seeing how much Dane loved Reid from the first moment he saw him made me feel a bit better."

Two weeks after Reid was born, Bec’s grandpa, who she was very close to, passed away from cancer.

"I was so grateful my grandpa got to meet his new great grandson, so looking back now it was a very bittersweet time. Although Reid will forever be the best Mother’s Day present I ever received."

If you have an amazing birth story to share, let us know by emailing a couple of short sentences to: [email protected] and including 'My Birth Story' in the subject line.