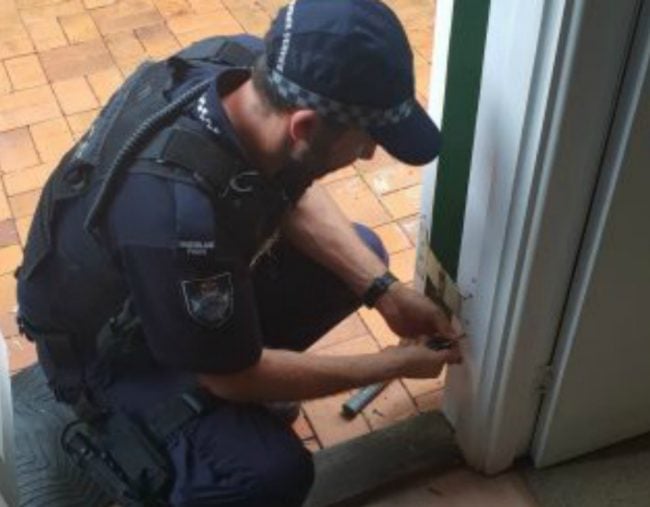 Last week, an elderly woman in South Brisbane disturbed an offender who was attempting to break into her home.

According to Constable Matt Boswell, who arrived at the scene alongside Senior Constable Christopher Couch, “it was clear the lady was very shaken from the ordeal.”

Her door had been torn off its hinges by the man she saw fleeing her property, meaning she had no way to secure her home.

When the police arrived, the widow who lived alone was relieved and thankful.

The first thing she did was offer them a cup of tea which the officers found particularly “thoughtful”.

She had been made to cancel her plans for the day because of the incident – and the two policemen made it their priority to sit with her, make conversation and ensure she was okay.

“We wanted to make her feel safe in her own home again,” Constable Boswell said, who had been a tradie before entering the police force.

So, he got down on his hands and knees, and reattached the door to its hinges, telling Queensland Police it was his “duty of care” to protect the woman.

“I went to work bending the hinges back and drilling new screw holes to re-hang the door on the door jamb. It was not perfect by any means, but the door was locked and secured,” Constable Boswell said.

As well as being thankful for their help, the woman also thoroughly enjoyed their company, giving the two men a tour of her house and showing them her favourite art pieces.

Before leaving, the policemen wrote a note for a handyman instructing what changes needed to be made to her home security.

The photographs of Constable Boswell putting his carpentry skills to good use have since gone viral, with many applauding him for being a "credit to the force" with such an important act of kindness.

It's a significant contrast to a video publicised in April of this year, of six Australian police officers humiliating and beating a pensioner with a disability outside his Melbourne home.

The matter was investigated at the time, and contributed to what Assistant Commissioner Luke Cornelius said was a lack of trust in Victoria's police force.

Cases of police misconduct are rightfully and necessarily widely reported, however, there's something we mustn't forget.

The majority of men and women who work in the Australian police force are responsible for small and large acts of kindness everyday that most of us never see.

They console the traumatised, speak to those at their most vulnerable with dignity and respect, listen when no one else will and are there, first and foremost, because they care deeply about their community.

There are exceptions, of course, as there are in every profession.

But Constable Boswell and Senior Constable Couch remind us that on the whole, when it comes to Aussie police, we're pretty bloody lucky.

I have the utmost respect and admiration of our boys and girls in blue, and all those who work as first responders, and in the armed forces as well. They do an amazing job, sometimes under the most difficult of circumstances, and often while being abused and harangued for their trouble. For all those that would abuse and criticised those that do these jobs, how about you risk your life to save someone else's life, have to leave your kids party because of an accident or major crisis and see how hard it is to do this job.