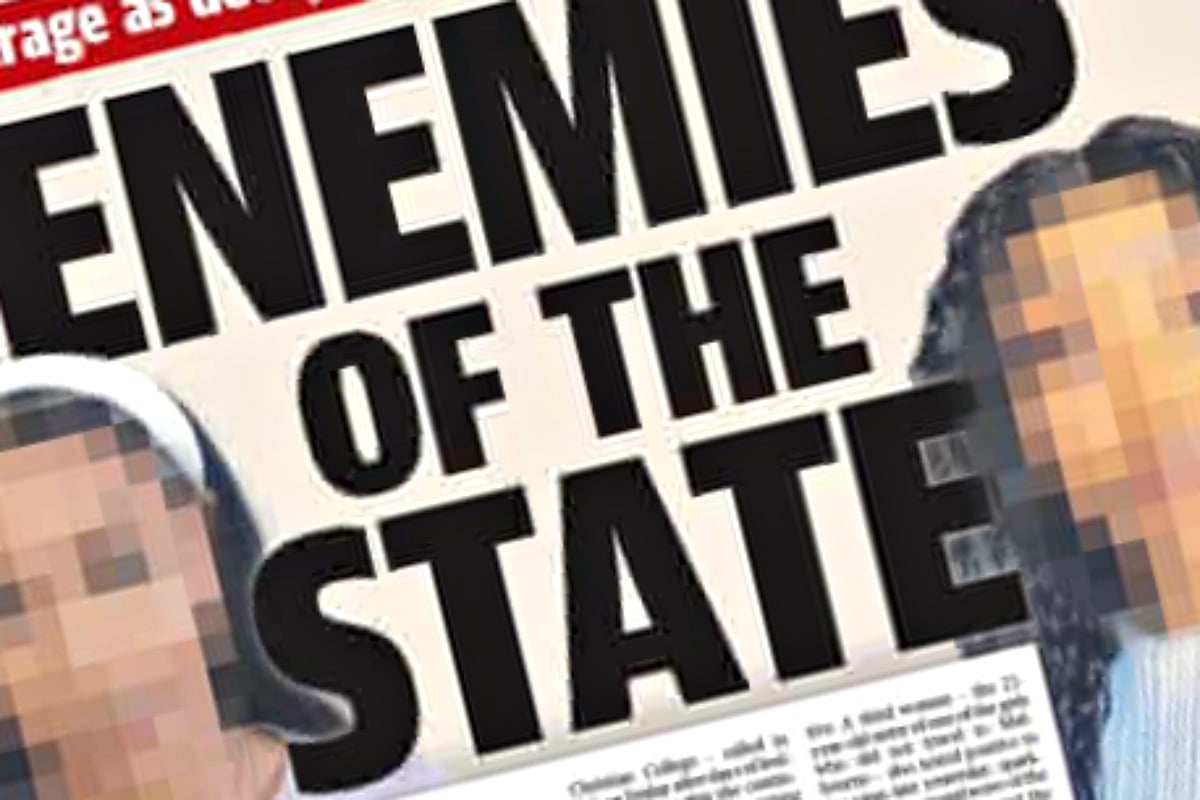 The faces and names of two Queensland women have been plastered across newspapers and social media this week.

"Enemies of the state," one Queensland newspaper declared them in bold type. "Dumb and dumber," hollered a Victorian stablemate.

The 21-year-olds were yesterday charged with fraud and deliberately providing false or misleading documents under the Public Health Act.

Queensland Police will allege the pair deliberately tried to avoid quarantine upon returning from a trip to Melbourne by giving incorrect information on their border declarations.

They are now both in isolation in a Brisbane hospital, having reportedly tested positive for COVID-19. That's after they spent several days moving freely around the community, working and socialising.

These women, these so-called "enemies", have not been named by police. That was the media's move.

That decision has unleashed a torrent of online vigilantism, as commenters weigh in with their ideas of appropriate justice and declarations about what they 'deserve'. This discussion has included commentary on everything from their appearance, to assumptions about their places of birth presumably prompted by the colour of their skin.

Meanwhile, those accused of other significant breaches of COVID-19 directives have been kept anonymous.

From the security staff that flouted protocol in Melbourne's quarantine hotels (and are believed to be the source of the recent surge in cases), to the NSW man recently discovered hiding in the boot of a car crossing the Queensland border.

Or the Queensland doctor who provided misleading information on his border declaration pass and failed to quarantine after a trip to Melbourne earlier this month.

Or the Victorian couple who flouted isolation orders back in March after returning from the Aspen ski resort in Colorado, where they contracted COVID-19 at an exclusive cocktail party. Dozens of Australian infections were later traced back to people who'd attended that event.

We don't know any of these people's names. We haven't been shown their faces.

Very much open to hearing more about the service to public health these front pages are providing today. pic.twitter.com/AMhQjSLUcj

In fact, in the Aspen circumstance, a number of major media outlets declared that they had made a deliberate "editorial decision" not to identify those involved.

Yet those same outlets this week shared the photographs and names of the two Queensland women.

The nature of their charges are particularly severe, certainly — they're facing a maximum penalty of $13,345 on the misleading documents charge and five years in prison on the fraud one. And yes, the media often identifies and pictures people accused of criminal offences.

But this public naming and shaming occurred even before any charges were laid.

This is not a case of them deserving our sympathy. What they've been accused of is utterly abhorrent and the potential consequences of their alleged recklessness, sickening.

But given Queensland Police say these women are now cooperating fully, and given that Australia's contact-tracing system is considered among the most robust in the world, it seems pertinent to ask:

What is there to be gained from knowing what they look like? Other than, that is, more anger, more vitriol and division.

H
hopey a year ago

Reply
Upvote
1 upvotes
This is not about race, it's about sheer entitled stupidity. White AFL partners have been named and shamed, as has Missy Higgins Dr father. Eve Black was rightly shamed for her checkpoint antics but has then (very unfairly) had her entire private life revealed to the public when none of that is illegal. Slut shaming at its worst. Perhaps you should do a story on that. These two idiots have committed one illegal act after another. They should be ashamed.
M
mamamia-user-228828311 a year ago

Reply
Upvote
2 upvotes
What about all the women labelled 'Karens' that have been publicly shamed non stop for the last 2 weeks? For not wearing face masks, not giving their details to the police when asked. All white women with their faces, names and even their locations and occupations plasted all over the news and in the media. So they can be called a racist, sexist and ageist name (look at the urban dictionary definition of a Karen) but people of colour who behave in a worse manner than these Karen's aren't to touched? A bit hypocritical don't you think ?
L
laura__palmer a year ago

Reply
Upvote
1 upvotes
@mamamia-user-228828311 What is wrong with these women that they are not wearing masks and flouting laws? And, they are filming themselves doing it, one was even on the Today show, so they are kinda doxxing themselves. I have no sympathy for these women, they are doing it to themselves for attention.
News
General
Opinion
True Crime
Politics
Sport
Explainer
Entertainment
Celebrity
Reality TV
Movies
TV
Books
Rogue
Royal
Lifestyle
Beauty
Fashion
Weddings
Home
Wellness
Health
Fitness
Travel
Food
Parents
Before The Bump
Pregnancy
Baby
Kids
Teens
School
Parent Opinion
Work & Money
Money
Finance
Career
Lady Startup
Relationships
Sex
Dating
Separation
Friendship
Family
Real Life
Couples