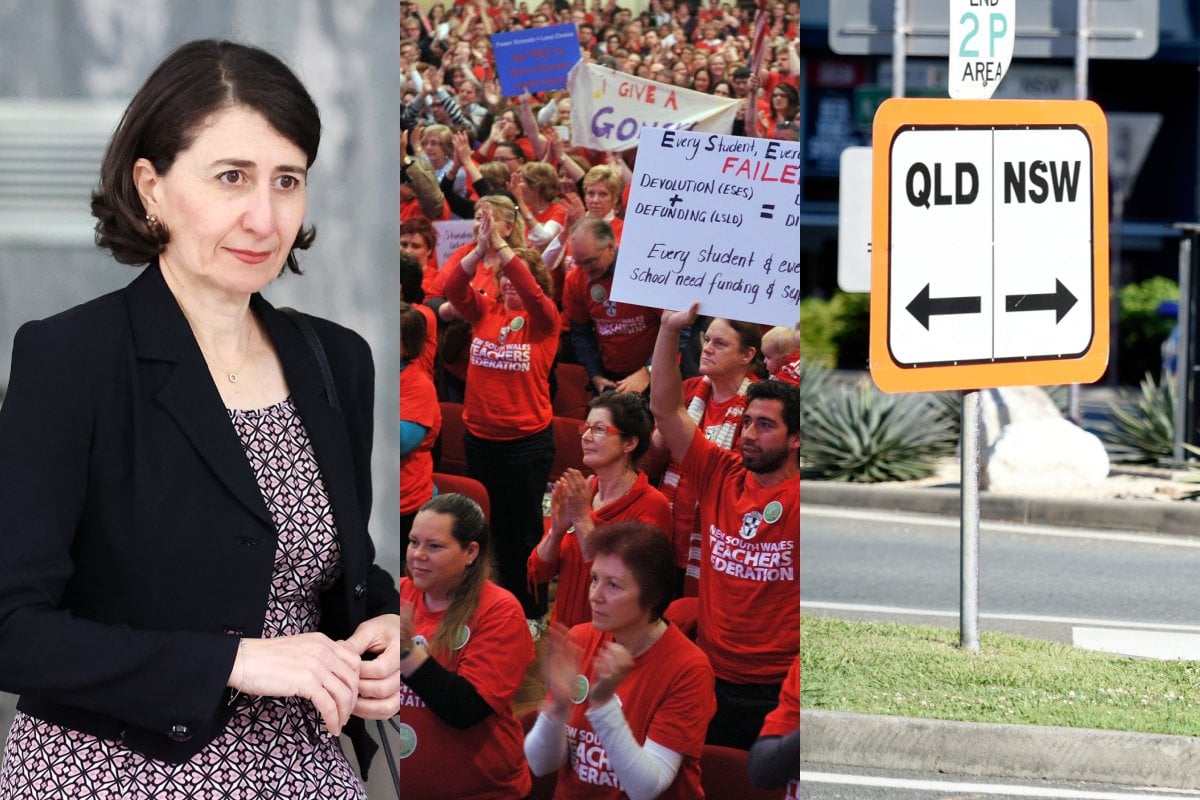 The Queensland border will open to interstate COVID-19 hotspots several days early as health authorities prepare for an influx of travellers from next Monday.

Premier Annastacia Palaszczuk said the state was predicted to reach the 80 per cent double-dose target this week, and the December 13 date was chosen to "provide everyone with certainty".

"This is going to be a very, very special time of the year," Ms Palaszczuk said on Monday.

BREAKING: Queensland will reopen at 1am on 13 December as we move towards the 80% vaccination milestone earlier than expected.

Nominating a time and date for reopening gives everyone certainty to book flights and accommodation and make plans to visit loved ones. pic.twitter.com/lYWnKoAUAk

Travellers from COVID-19 hotspots must be fully vaccinated and show proof of a negative test taken within three days of their arrival.

Those coming from domestic hotspots must also get another COVID-19 test on day five of their arrival, but only have to wait one week from when they receive their second vaccination dose before entering the state.

Queensland will REOPEN its domestic borders from 1am on December 13, with the state set to reach its 80 per cent vaccination target this week. #9Today pic.twitter.com/XFb58h50t4

International arrivals to Queensland must be fully vaccinated and return a negative test within 72 hours of departure, and will also require a test on arrival as well as 14 days in home or hotel quarantine.

NSW teachers, bus and train drivers are on strike looking to end long-running negotiations with the state government and its various agencies over pay, conditions and privatisation.

Public school teachers and principals are off the job on Tuesday, accusing the government of failing to address unsustainable workloads, uncompetitive salaries and staff shortages.

They want a pay increase up to 7.5 per cent a year to "begin to reverse the decline in teachers' wages compared to other professions".

Tuesday’s strike is all about teachers, students and the future of our profession. #MoreThanThanks pic.twitter.com/TxljKD9w0z

The government was also lacking a coherent strategy to fill 3000 vacant positions and recruit 11,000 teachers the state would need in the next decade, teachers say.

Transport strikes began on Monday, with bus drivers in the inner west going on strike and their unions calling on the state government to demand its contractor Transit Systems negotiate over a two-tier wage system that has some workers earning less than others for doing the same job.

That industrial action continues on Tuesday with drivers from Sydney's southwest going on strike, before drivers from both regions stop work for two hours during the Friday afternoon peak.

Bus commuters looking for alternative transport will be short of options, with train drivers refusing to operate foreign-made trains that run about three quarters of the services.

The Rail, Tram and Bus Union (RTBU) union wants an end to privatisation, safety standards maintained and a commitment to retaining current hygiene standards while not relying on contractors to provide it.

Prime Minister Scott Morrison and senior Liberals are encouraging the former New South Wales premier Gladys Berejiklian to run as the party's candidate in Warringah at next year's federal election.

Independent MP Zali Steggall says federal ministers have lost touch with the public after a number of Liberal frontbenchers welcomed the idea of Berejiklian making a tilt for the the northern Sydney electorate's federal seat.

Speculation has increased the former NSW premier would put her hand up for Liberal preselection to run against Ms Steggall, after the independent won it from former prime minister Tony Abbott in 2019.

Ms Berejiklian is being investigated over whether she failed to disclose a relationship with Wagga Wagga MP Daryl Maguire when awarding grants to his electorate and has also been accused of turning a blind eye to Mr Maguire's corrupt conduct.

Independent MP for Warringah @zalisteggall tells @abcnews it is ‘extraordinary and wrong’ for PM @ScottMorrisonMP and senior ministers to ‘undermine’ the work of bodies like the NSW ICAC in their push to have former Premier @GladysB run in Warringah.#auspol

Prime Minister Scott Morrison said there was no suggestion of criminal conduct, having described the commission's public hearings as a kangaroo court.

"If she wants to have a crack at Warringah for the Liberal Party, I suspect the people in Warringah would welcome that," he said.

Scott Morrison and the LNP want us to believe they can be trusted with the renewable energy transformation.

Seriously. The same guys who said EVs would end the weekend and that big batteries are like the big prawn.

A clip from the National Press Club: pic.twitter.com/cc9y4xVXGA

The ICAC has not yet delivered any findings in relation to Ms Berejiklian and does not make criminal determinations.

Ms Berejiklian previously ruled out running for Warringah before the ICAC probe concluded but has since walked back her comments to Liberal insiders as she weighs up her options.

Australia is calling for the release of Myanmar's deposed democratically elected leader Aung San Suu Kyi, who has been sentenced to at least two years in detention.

"Australia continues to call for the release of all those arbitrarily detained in Myanmar, and for a return to the path of democratic transition as soon as possible.

"Australia has been a longstanding supporter of Myanmar and its democratic transition."

A court in military-ruled Myanmar sentenced Ms Suu Kyi to four years in detention on Monday on charges of incitement and breaching coronavirus restrictions.

State television later said the sentence had been reduced to two years in a partial pardon.

In February, Myanmar's military generals seized power and detained Ms Suu Kyi along with officials from her National League for Democracy party, which won an election in November 2020.

Income inequality has remained steady for the past two decades, while single parents and young Australians are more likely to be worse off, a new household study shows.

Home ownership rates have also decreased, with more adults between the ages of 18 and 29 living at home, according to the latest Household, Income and Labour Dynamics in Australia survey.

Just under two-thirds of people live in homes they own, while homeowner debt levels have doubled in real terms to more than $355,000.

Meanwhile, the survey shows the way wealth is distributed across the population's different economic groups has changed little since studies began two decades ago.

In 2019, almost a quarter of children in single parent families were living in poverty.

Parents in coupled families are significantly more likely to both be employed than in 2001, and the number of families with pre-school aged children in childcare has almost doubled to more than one in two.

Household disposable income has only grown six per cent since 2009 after jumping 28 per cent in the eight years prior to that.

- Italy is excluding unvaccinated residents from indoor restaurants, theatres and museums until January 15 in a bid to reduce the spread of coronavirus and encourage vaccine sceptics to get their shots.

- New York City has announced a sweeping coronavirus vaccine mandate for all private employers from December 27, the first of its kind in the United States.

New York City has announced a vaccination mandate for private sector employees and customers to slow the spread of COVID-19 over the festive season. pic.twitter.com/TcrG2Vz0HJ

- A three-party deal to form a new German government under centre-left leader Olaf Scholz has cleared its final hurdle, setting the scene for him to succeed longtime Chancellor Angela Merkel this week.

Reply
Upvote
1 upvotes
Pay attention, Australia. Morrison and his government think it's absolutely fine to have someone who is still under investigation for corruption to run for election.
G
gypsy 2 months ago