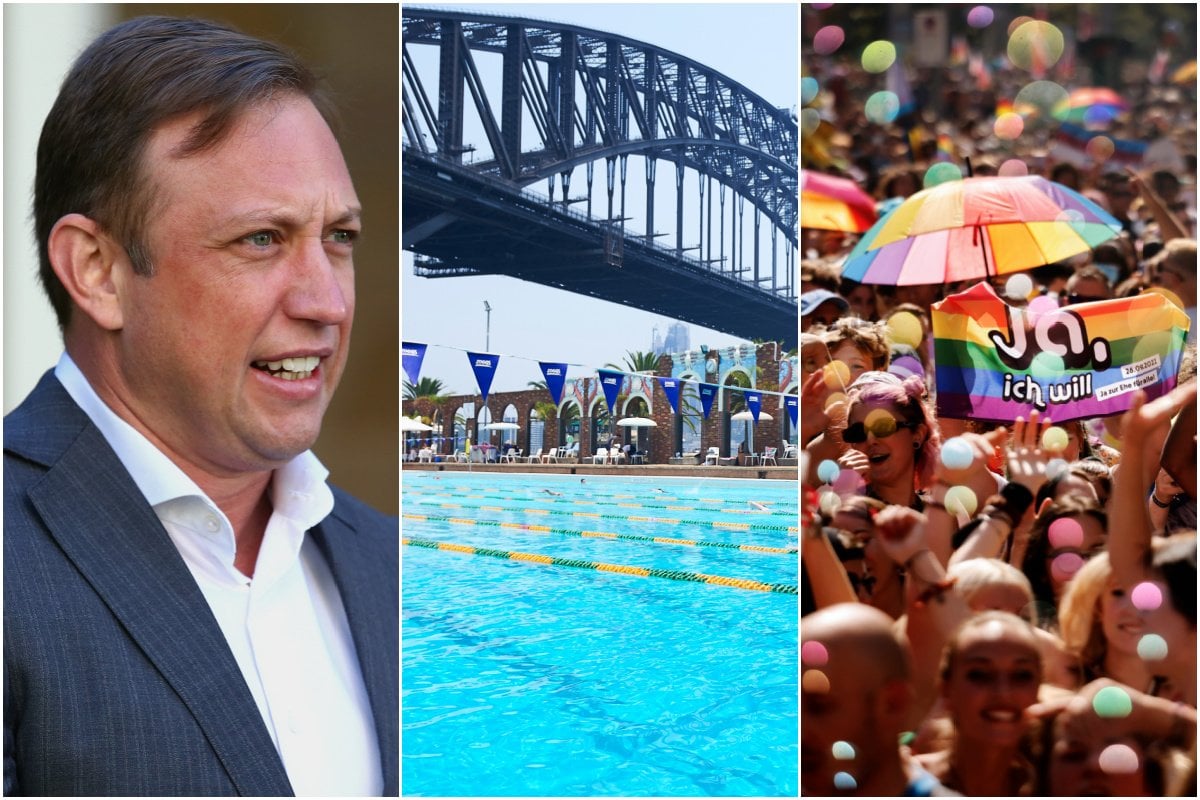 It's already commonplace overseas, but Australians are being told home COVID-19 testing kits will become widely available here as soon as the medical regulator approves its use.

"Subject to effectiveness against Delta, we would like to see these available by Christmas if not well before," Mr Hunt said, as reported by Sydney Morning Herald.

The Therapeutic Goods Administration has stressed they will not replace PCR testing, and would require the support of states and territories.

Instead of sending off swabs to a lab, the kits provide results in 10-15 minutes.

Right now rapid antigen tests are being used in aged care and film and TV production, and aren't allowed to be sold to individuals.

It means for home testing to be legal, there will first need to be regulatory change.

Both NSW and Victoria want to use the tests in schools.

Queensland Deputy Premier Steven Miles has criticised the Prime Minister for giving people false hope about the state opening its borders in time for Christmas.

Scott Morrison is putting pressure on premiers who are wavering on opening borders, once they strike a rate of 80 per cent rate of double-dosed vaccinations, to stick to the national plan.

But on Sunday Mr Miles reiterated his premier's hesitancy, telling reporters "frankly, I think the Prime Minister should be more focused on the health and wellbeing of people in New South Wales and Victoria, and on international affairs, than what might happen in Queensland in a few months' time."

Deputy Premier Steven Miles has launched a fiery attack on Prime Minister @ScottMorrisonMP who he claims is trying to give Queensland a Delta outbreak as a Christmas gift.https://t.co/oh7dBZkCpi

On Friday Premier Annastacia Palaszczuk said lifting border restrictions even after vaccine coverage reaches 80 per cent would be a "backward" step.

The Queensland leader is also facing criticism for her flippant remarks about overseas travel, to which she said: "Where are you going to go? Are you going to go to India? In Tokyo, you have to sit in perspex screens with masks on and if you remove your mask you can’t talk while you’re eating."

Australians aching to see family and visit graves in India have since told the Courier Mail, they’re hurt by the "sarcastic" and "condescending" comments.

NSW will in the coming week reveal its roadmap for 80 per cent vaccination coverage, and the premier wants international travel to resume "at the earliest opportunity".

The state recorded 961 new local cases of COVID-19 and nine additional deaths in the 24 hours to 8pm on Saturday. None of the nine people, aged from their 40s to their 80s, were double jabbed.

Premier Gladys Berejiklian on Sunday told reporters the government's plans for 80 per cent double-dose vaccination coverage - expected in roughly late October - will be revealed in the coming days.

The plan for what life looks like once New South Wales reaches 80 per cent double dose coverage is expected to be unveiled by Premier @GladysB today.https://t.co/gFRReF6IzB

This plan will extend the restoration of freedoms - which will commence at 70 per cent coverage - to fully vaccinated Australians.

It is likely to include larger gathering caps, larger major event crowds, auctions and the resumption of community sport.

But it may also involve the government delaying the resumption of regional NSW travel from 70 per cent to 80 per cent coverage.

On Sunday she expressed her hope that outbound travel, currently banned by federal authorities, would also be allowed again imminently.

Today, Monday 27th, public pools are reopening across NSW with construction in the state returning to 100 per cent capacity.

Councils and NSW Health have defended the decision to allow unvaccinated people to access outdoor pools when they reopen on Monday | @pallavisinghal_ https://t.co/BFJZslYDge

Hardware stores and nurseries will be allowed to open to members of the general public in hotspot areas from today, streamlining the rules for retail stores across all areas in lockdown.

A modest easing of restrictions for Vic this week.

Golfers itching to get back into the swing of things can expect to be on the fairway in days as Victorian vaccination numbers continue to rise.

Restrictions, including a return to golf and tennis, will ease slightly across the state on Wednesday, with Victoria expected to pass 80 per cent single dose vaccination coverage on Tuesday.

Premier Daniel Andrews said while the changes were "modest", the state is getting closer to the end of lockdown.

It means a slight easing of the rules will come, but not until Wednesday, allowing golf, tennis and personal training for groups of five, fully vaccinated people. @msanto92 #9News pic.twitter.com/kCyyGowDfp

Residents of locked down areas will be able to travel 15km from home, up from 10, while patron caps in regional venues will increase from 20 to 30.

There was also good news for the city of Geelong, which will be released from lockdown at midnight, despite the diagnosis of six new cases on Saturday.

All cases were linked.

A series of "vaccinated economy" trials were also announced on Sunday, to begin across some regional Victorian businesses from October 11.

Select businesses in Buloke, Pyrenees, Bass Coast, Bendigo, East Gippsland and Warrnambool will test systems in the fortnight before Victoria is due to hit the 70 per cent double dose vaccination mark.

Among the issues to be explored during the trials are vaccine status verification and how to help businesses safely deal with aggressive customers who are denied service.

Another 779 new locally acquired COVID-19 infections and two further deaths were reported on Sunday. The state is now host to more than 8000 active cases.

More than 77 per cent of Victorians aged 16 and over have now had at least one dose of a COVID-19 vaccine, while more than 47 per cent have had two doses.

Two people have been charged over a picnic attack at a Melbourne park during which the victims' masks were ripped from their faces.

A 35-year-old woman and a 44-year-old man, both from Box Hill North, have been charged over the attack at Slater Reserve in Blackburn North on Thursday.

Both have been charged with affray.

Two people have been charged following an alleged assault at Slater Reserve in Blackburn North. Two women and two 12-year-old girls were having a picnic at the time of the incident.

Thanks to everyone who helped with this investigation. 🙏🏽

Two women, aged 43 and 51, were assaulted during a picnic at the park with their two 12-year-old daughters.

Two males who came to their aid were also injured after being bitten on the hand by a dog.

The man and woman who were charged were bailed to appear at Ringwood Magistrates Court on March 25 next year.

Vic Nationals MP to 'take a break' over 'failure of leadership'.

Two months after Barnaby Joyce reclaimed the federal leadership of the Nationals Party, a former frontbencher has announced he's taking "some time away".

Victorian-based MP Darren Chester confirmed reports on Sunday he was "taking a break" but was careful to clarify that he is not quitting the party.

"My decision follows months of frustration with the repeated failure of the leadership to even attempt to moderate some of the more disrespectful and offensive views expressed by a minority of colleagues," Mr Chester posted online.

Darren Chester is on a break from the Nationals "to reflect on a number of significant issues" including "failure of the leadership to even attempt to moderate some of the more disrespectful and offensive views expressed by a minority of colleagues" pic.twitter.com/IH72yYZXTH

He says he will not attend organised meetings, events and activities in the Nationals federal parliamentary party room, and will reassess his position when parliament resumes in mid-October.

Mr Chester, 54, lost his frontbench spot when Mr Joyce returned to the Nationals leadership in June.

His return marked a three-year political comeback after losing the deputy prime-ministership to scandal.

Mr Chester has been increasingly concerned about Mr Joyce's reluctance to rein in close supporters George Christensen and Matt Canavan.

Switzerland has voted by a wide margin to allow same-sex couples to marry in a referendum, bringing the Alpine nation into line with many others in western Europe.

Official results on Sunday showed the measure passed with 64.1 per cent of voters in favour and won a majority in all of Switzerland's 26 cantons, or states.

Switzerland's parliament and the governing Federal Council supported the 'Marriage for All' measure. Switzerland has authorised same-sex civil partnerships since 2007.

Supporters said passage would put same-sex partners on equal legal footing with heterosexual couples by allowing them to adopt children together and facilitating citizenship for same-sex spouses. It would also permit lesbian couples to utilise regulated sperm donation.

Switzerland, which has a population of 8.5 million, is traditionally conservative and only extended the right to vote to all its women in 1990.

Italy is the last country in Western Europe to still forbid gay marriage.

Iceland has elected a female-majority parliament, a landmark for gender equality in the North Atlantic island nation.

After all votes were counted on Sunday, female candidates held 33 seats in Iceland's 63-seat parliament, the Althing.

The three parties in the outgoing coalition government led by Prime Minister Katrin Jakobsdottir won a total of 37 seats in Saturday's vote, two more than in the last election, and appeared likely to continue in power.

The milestone for women comes despite a poor outcome for parties on the left, where female candidates are more often frontrunners.

Politics professor Silja Bara Omarsdottir said the gender quotas implemented by left-leaning parties for the past decade had managed to create a new norm across Iceland's political spectrum.

"It is no longer acceptable to ignore gender equality when selecting candidates," she said.

Major scramble on The View as hosts test COVID-positive ahead of Kamala Harris interview.

Ana Navarro and Sunny Hostin were asked to leave the set immediately, after returning COVID-positive tests.

During the broadcast a producer can be heard telling them, "We need the two of you to step off, and we’ll bring you back later. We’ll tell you why later."

A planned interview with Vice President Kamala Harris on #TheView was derailed Friday when two of the show’s co-hosts were asked to exit mid-broadcast because they tested positive for COVID. https://t.co/p0oYd0WExY pic.twitter.com/18Fr07Jary

View star Joy Behar was left to steer the ship, and a video link was organised at the last minute for the Vice President to appear on rather than joining them on the desk.

- Counting is right now underway in Germany, with voters deciding who will replace Angela Merkel as Chancellor after 16 years in power.

- About two-thirds of British petrol stations say they have run out of fuel as the country hoards fuel amid supply shortages.

- The Taliban have banned hairdressers in Afghanistan's Helmand province from shaving or trimming beards, saying it breaches their interpretation of Islamic law.