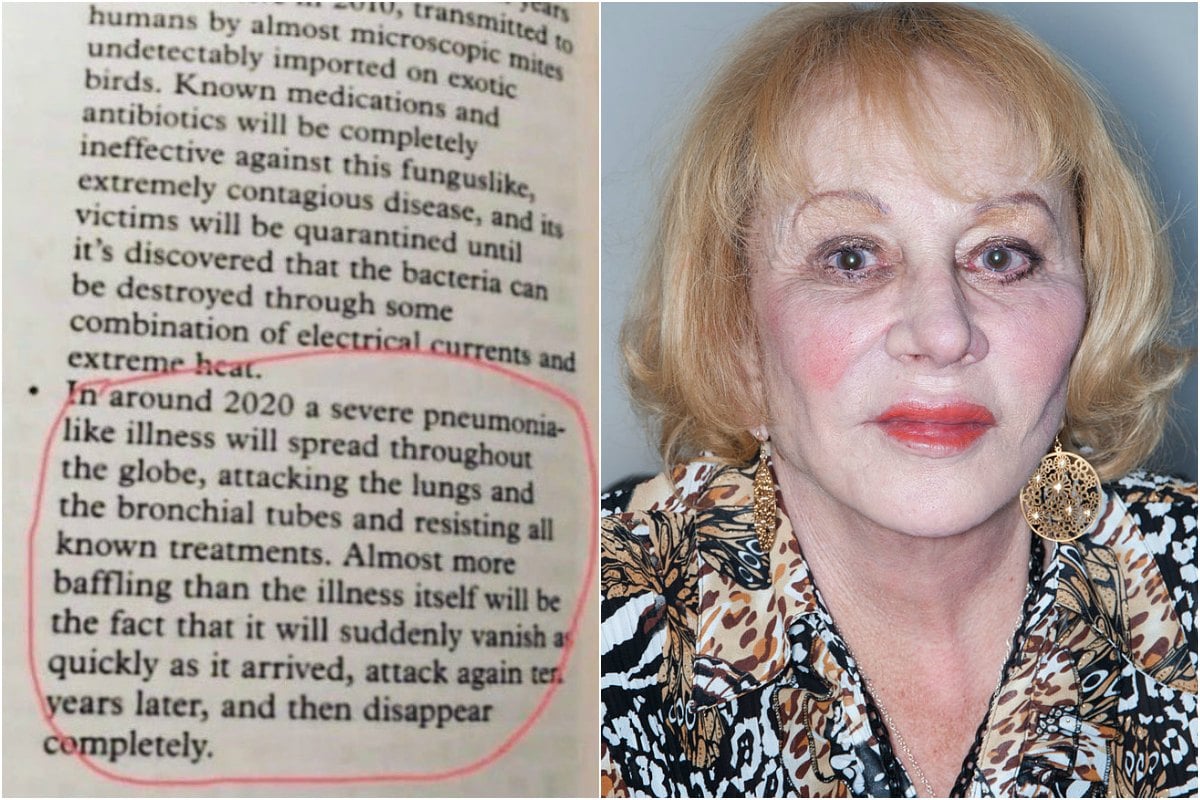 Not to make light of what is a very serious, global health threat, but it has come to our attention that a psychic managed to predict the current coronavirus outbreak in 2008.

Her name is Sylvia Browne and over a decade ago, she wrote a book called End of Days: Predictions and Prophecies About the End of the World. It’s not exactly a cheery read but in it, she writes about a “a severe pneumonia-like illness”.

“In around 2020 a severe pneumonia-like illness will spread through the globe, attacking the lungs and bronchial tubes and resisting all known treatments.”

Psychic Debbie Malone, on how to know if there are spirits around. Post continues below.

Like Browne’s predicted disease, coronavirus can result in antibiotic-resistant pneumonia in some, however the majority of patients will only experience mild cold and flu-like symptoms. Credit to her, it has so far resulted in 128,325 global cases, with 199 cases in Australia.

But, if Browne is correct, she also said the disease will “suddenly vanish as quickly as it arrived.”

“Almost more baffling than the illness itself will be the fact that it will suddenly vanish as quickly as it arrived, attack again ten years later, and then disappear completely,” she wrote.

But before you go off and buy her book, keep in mind that Browne – now deceased – attracted her fair share of infamy during her career. In a 2004 episode of The Oprah Winfrey Show, Browne told the parents of teen kidnapping victim, Amanda Berry that their daughter had passed away and that she had a vision of Berry’s jacket in the garbage with “DNA on it”. Berry escaped in 2013 but her mother, Louwana Miller had passed away two years prior.

In 2002 she also told the parents of 11-year-old kidnapping victim, Shawn Hornbeck, that he had been taken by a dark-skinned Hispanic man with dreadlocks and had since passed away. The teenager was found alive in 2007 and his kidnapper was a short-haired Caucasian man named, Michael J. Devlin.

Kourtney just sent this on our group chat pic.twitter.com/XyjGajY71d

When it comes to the coronavirus, a 1981 science-fiction novel, The Eyes of Darkness by Dean Koontz has also been credited with predicting the disease. The American author wrote about a man-made virus strain called “Wuhan-400”. Critics have also pointed out the similarities between ‘400’ and 2020.

“They call the stuff “Wuhan-400” because it was developed at their RDNA labs outside the city of Wuhan, and it was the four-hundredth viable strain of man-made microorganisms created at the research center.

Wuhan-400 is a perfect weapon. It afflicts only human beings. No other living creature can carry it. And like syphilis, Wuhan-400 can’t survive outside a living human body for longer than a minute, which means it can’t permanently contaminate objects or entire places the way anthrax and other virulent microorganisms can.”

2. End of Days: Predictions and Prophecies About the End of the World, Sylvia Browne, (2008)

“In around 2020, a severe pneumonia-like illness will spread throughout the globe” pic.twitter.com/ws8FAiU8KA

Now look, without undermining the power and abilities of psychics – each to their own –  we’ll let you ponder whether a psychic did, or did not, predict the coronavirus outbreak.

But if the pandemic does indeed, as Browne wrote all those years ago, vanish as quickly “as it arrived,” you won’t catch us complaining.

"we’ll let you ponder whether a psychic did, or did not, predict the coronavirus outbreak."

There's nothing to ponder. She didn't. The end. Sylvia Browne was nothing but a scam artist.

Or a plagiarist cos see
the book is "The Eyes Of Darkness"
Written by Dean Koontz 40years ago.....

Hey, why not both?

Well, fat lot of good that's done us! And she seems to have made a similar sort of prediction in the preceding paragraph, I must have missed that one in 2010!