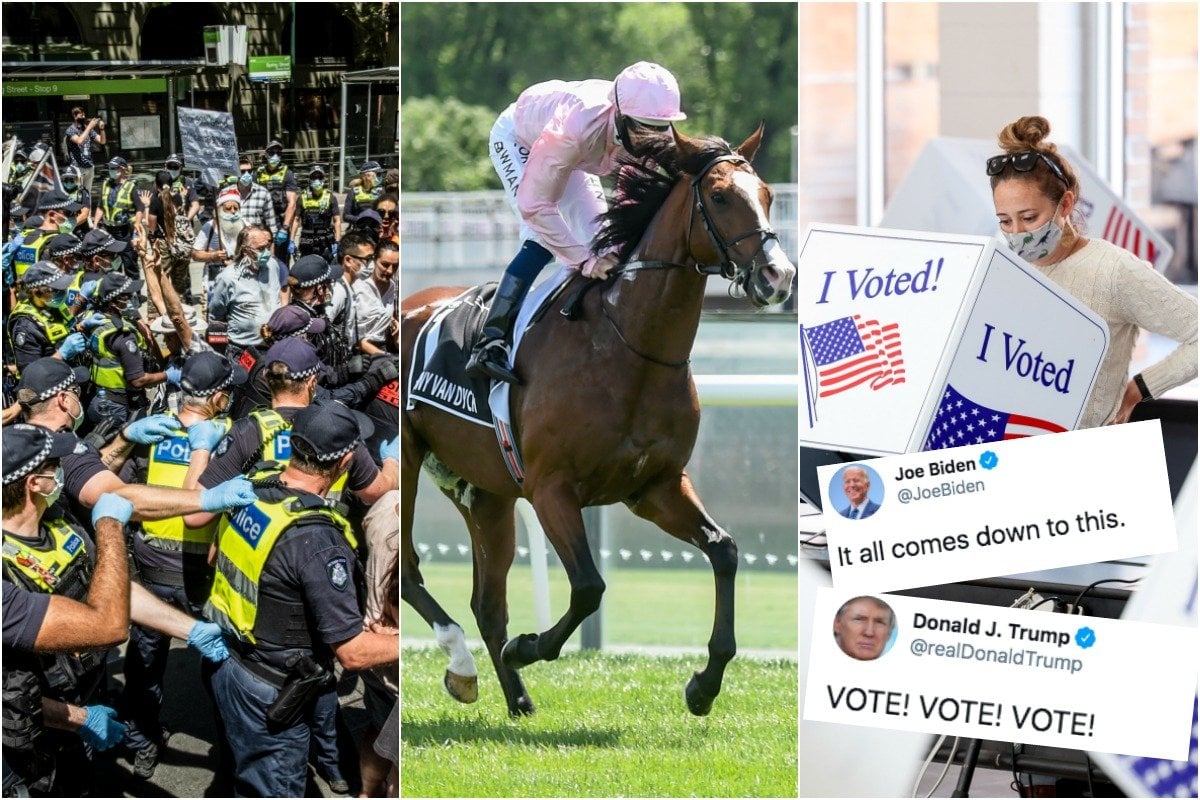 400 arrested in Victoria as authorities warn of "long road ahead."

Victoria has recorded no new cases of coronavirus for a fifth consecutive day the day after police clashed with anti-lockdown protesters, arresting over 400 people.

Another 395 fines will also be handed out for a range of offences including assaulting police and coronavirus rule breaches.

With Flemington Racecourse closed to punters for the 160th running of the Melbourne Cup, pubs and bars filled up quickly amid cap limits of 50 people outdoors and 20 indoors.

Thousands also flocked to beaches in St Kilda, Brighton and Williamstown, with many flouting orders to wear masks unless in the water.

Despite Tuesday's COVID-19 feat, health authorities believe there are still undetected cases in the state.

The state has today recorded yet another day of zero deaths and zero new cases.

Zero new cases and zero lives lost reported in the last 24 hours. The 14 day rolling average is now 1.7, and there are 2 cases with an unknown source. For more info visit: https://t.co/eTputEZdhs #COVIDVicData pic.twitter.com/uQ3rm75oO5

But Victoria's Commander of Testing Jeroen Weimar warns of a "long road ahead" before the state can return to 'COVID-normal'.

"We're not over this by any means," he told reporters in St Kilda on Tuesday.

"We've got a long way to go to make sure we identify any remaining areas of transmission." 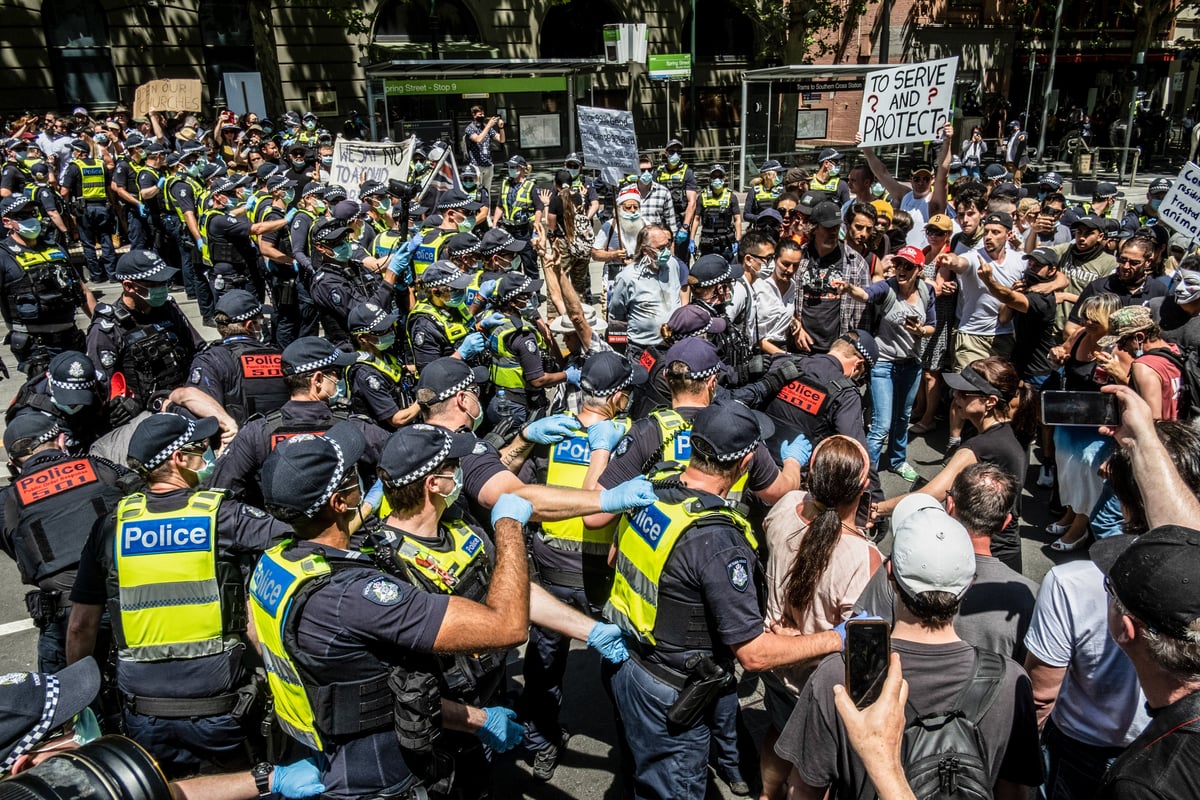 Protesters clash with Victoria Police at Parliament House despite the city enjoying its first week of freedom from harsh restrictions since stage four lockdown was implemented.Image: Diego Fedele/SOPA Images/LightRocket/Getty.

Mr Weimar said there are "absolutely" more undetected cases of COVID-19 in the community.

There are now 38 active cases in Victoria, the lowest number since the government began recording them on March 29.

Calls for probe into death of Cup horse.

Animal welfare groups are calling for an investigation into the death of high-profile Melbourne Cup runner Anthony Van Dyck, who had to be euthanised after failing to finish the race.

The 2019 English Derby winner was rated one of the best horses to be sent to Australia for a spring campaign, but was injured during Tuesday's Cup, which was won by Twilight Payment.

Racing Victoria said the horse had to be "humanely euthanised after sustaining a fractured fetlock".

Breaking: Anthony Van Dyck, one of the pre-race favourites, has been loaded into an ambulance at the track #MelbourneCup https://t.co/2cCUteWb22

The five-year-old stallion is the seventh Melbourne Cup death in as many years, prompting calls for an investigation from the RSPCA.

"Whenever there is an adverse outcome for an animal, our expectation is that the industry will do a comprehensive review to identify ways to improve in an effort to avoid unnecessary injury or trauma in the future.

"Racing presents numerous risks for horses and this very unfortunate incident illustrates the need for the industry to work toward better welfare for animals used in sport."

Animal rights group PETA called for an "immediate investigation" into the death, and an end to the racing industry. 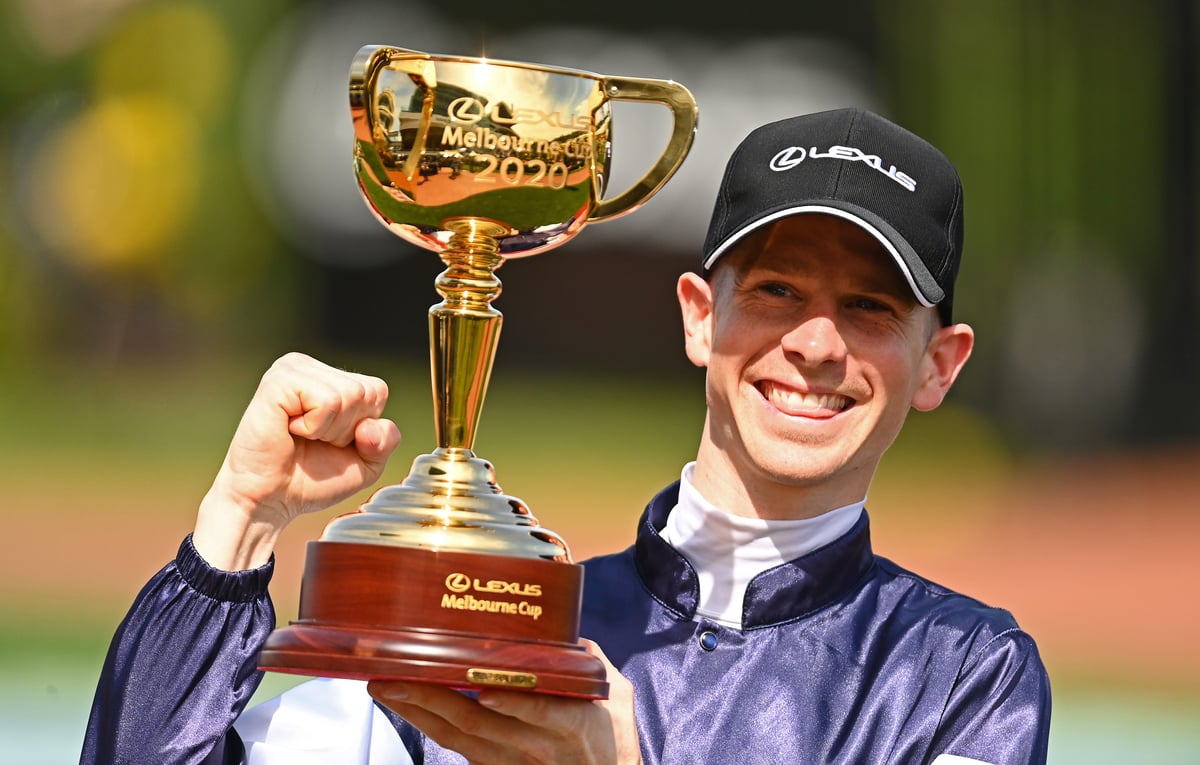 Jye McNeil who rode Twilight Payment won Tuesday's 2020 Melbourne Cup. The win was overshadowed by yet another horse death during the Cup. Image: Quinn Rooney/Getty.

A judge has ordered the US Postal Service to sweep some mail processing facilities for delayed ballots and immediately dispatch them for delivery in election battlegrounds such as Pennsylvania and Florida among other places.

US District Judge Emmet Sullivan ordered postal officials to complete the inspections by 3pm EST and certify by 4.30pm EST that no ballots were left behind.

Breaking: U.S. Judge orders postal service to sweep facilities, including in Philadelphia, this afternoon to ensure no ballots have been held up for delivery pic.twitter.com/vVye4kd3uk

The ruling came in response to a lawsuit brought by groups such as Vote Forward, a voting rights organisation, and Latino community groups.

Many states will only count mailed ballots that are received by the end of Tuesday in their election results.

The acting US Department of Homeland Security secretary Chad Wolf says there is no evidence a "foreign actor" has compromised vote in the 2020 presidential election.

So far, election day voting lines have been largely marked by orderliness even as major cities brace for unrest.

Where are Biden and Trump on election day?

Us Democratic presidential candidate Joe Biden has started election day with a visit to church and the grave of his late son Beau, who died of brain cancer in 2015.

He is spending the rest of his day in Pennsylvania in a final push for votes.

President Trump says he's spending election day "making phone calls to people who have been loyal to him and will go to his campaign headquarters in suburban Virginia to thank the staff."

While there, he held a quick media conference. A reporter asked whether Mr Trump had prepared an acceptance or concession speech to which he replied, "I’m not thinking about concession speech or acceptance speech yet. You know, winning is easy. Losing is never easy. Not for me it’s not."

There has been concern Trump will declare himself the winner of the election before vote counts are definitive. He believes his large rally crowds during campaigning are the "ultimate poll" and translate to his imminent re-election.

Read: Overwhelmed by the US election? You only need to care about three results.

Two people have been arrested near Vienna, the APA news agency says, as police hunt accomplices of a gunman or gunmen who killed four people in what the government calls an Islamist terrorist attack in the Austrian capital.

In an early morning televised news conference, Interior Minister Karl Nehammer repeated calls for the public to stay off the streets.

Nehammer said police had shot dead one attacker on Monday night, a man wearing an explosives belt that turned out to be fake.

Authorities identified him as an Islamic State sympathiser. Authorities and witnesses were not immediately able to rule out the possibility there had been other gunmen.

Police confirmed on Tuesday that three civilians - two men and a woman - had been killed, and at least 15 others wounded, including a police officer. The national broadcaster ORF later said a fourth civilian, a woman, had died.

APA quoted police as saying two arrests had been made in the nearby town of St Poelten. The Kurier news site reported that heavily armed police had searched two properties.

Witnesses had described crowds being fired on in bars with automatic rifles on Monday night, as many people took advantage of a last evening out before the start of a nationwide coronavirus curfew.

Six locations were attacked in central Vienna, starting outside the main synagogue which was closed.

Seven of the injured are in a life-threatening condition.

NRL star Jack de Belin raped a teenager after ignoring her protests to stop undressing her and then asked why she was being "so emotional", a jury has been told.

The St George Illawarra player, 29, and his friend Callan Sinclair, 23, have pleaded not guilty to the aggravated sexual assault of a woman, then 19, after meeting her in a Wollongong bar in 2018.

Giving evidence on the opening day of the Wollongong District Court trial, the woman said Belin led the group to a North Wollongong unit "to charge his phone".

She was met in the dark bedroom by a clothed Sinclair, whom she'd kissed earlier in the night. De Belin then untied her top from behind and shoved her on the bed, she told the jury.

The woman couldn't recall how long that sexual encounter lasted, testifying she "was just going dead and numb inside and just let it happen".

She said de Belin and Sinclair alternated positions, "cheering each other on".

"I just had tears out of my eyes the whole time," she said.

WA's solicitor-general Joshua Thomson will on Wednesday finish arguing the state's case, centred on the border closure being necessary to reduce the risk of coronavirus entering and spreading.

Mr Palmer's legal team on Tuesday argued the closure had overreached, limiting freedom of movement allowed under s92 of the constitution.

They argued the measure wasn't reasonably necessary to stop the reintroduction and spread of the virus in the state.

State attorneys-general have intervened in the case, arguing the WA directions do not breach section 92 of the constitution.

The states are expected to present their arguments to the court on Wednesday.

The federal government withdrew from the case in August.

- India, the US, Japan and Australia have begun their largest joint naval exercises in over a decade, seen as part of efforts to balance China's vast military and economic power in the region.

- The death toll from Monday's attack on Kabul University in Afghanistan has risen to at least 35, two government sources say.

- Exhausted rescuers have freed a three-year-old girl from the rubble of a collapsed apartment block in Turkey, 91 hours after a deadly earthquake that's killed more than 100 people.