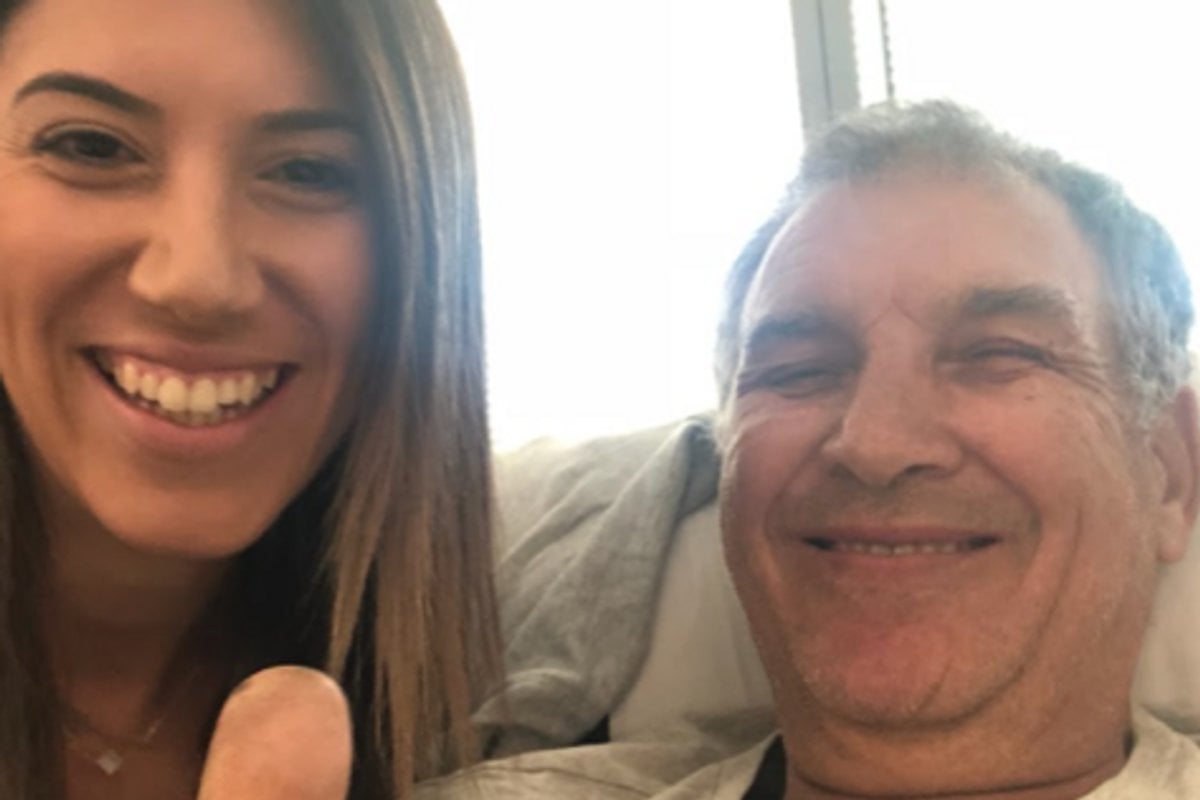 The first anniversary of the death of my courageous dad, Angelos, is coming up in September. He died from prostate cancer.

He’s not the only one, and my family isn’t alone in our grief. More than 3,000 men lose their lives to this disease every year, yet we’re not talking about it.

Women openly talk about breast checks and women’s cancers, and we wear our pink with pride, but ask men about prostate cancer awareness and they don’t know what to think or say.

My dad was 59 when he was diagnosed with prostate cancer in 2013. There were no obvious symptoms of cancer.

He was experiencing some discomfort going to the toilet, nothing antibiotics wouldn’t fix - or so we thought. Numerous tests later and he was diagnosed with prostate cancer - a disease that affects one in six men.

We were all in shock. It was the first time I had seen my dad so vulnerable. He was always so in control and hard working.

He emigrated from Greece at just 18 years old. He worked many years as a fitter and turner and was known to all as the go-to person to fix practically anything. He had a hand in making or fixing everything around me - fences, walls, windows, ceilings, bathrooms. You name it; he did it. He was the one we all turned to. 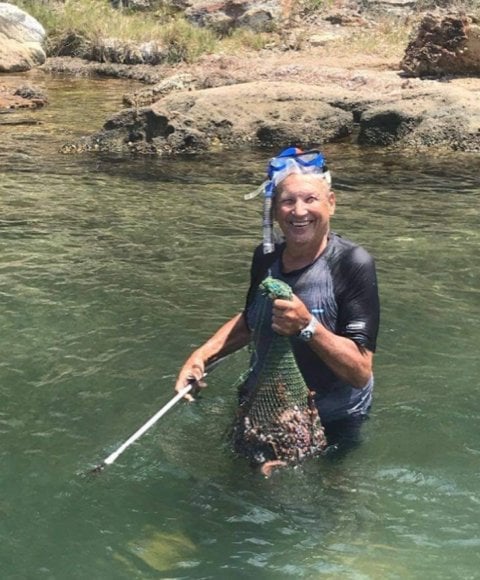 My dad Angelos, a shining light to so many people. Image: Supplied.

But on the day of his diagnosis, he was broken. Dad was a blubbering mess breaking the news to us. We all were. My dad was always on top of his health, regularly getting checked at the GP and there was no known history of cancer in the family, so we just never thought this would happen to us.

Dad always instilled in my sisters and me to look after our family and friends, because the relationships we foster are the most valuable thing we can ever possess in life. He cherished every opportunity he could get to have the family altogether, hosting big barbecues and get-togethers and would pick having a home party over going out to dinner any day. He was the constant shining light and the person so many of us turned to for advice.

Our family came together, digesting every bit of information there was about prostate cancer - if you catch the cancer in its early stages the survival rate is 98 per cent. We were staying positive despite the doctors advising us that it was an aggressive cancer that had spread across half the prostate, with a chance some of the cancer cells had escaped beyond the prostate.

Dad decided to have a prostatectomy - surgery to remove all of the prostate gland. Unfortunately, surgery can have some really unwanted side-effects, like incontinence. Because the cancer had gone beyond the prostate, after surgery Dad also had radiotherapy, followed by several rounds of hormone therapy.

The treatment can be really brutal, but we all developed a special bond with Dad’s health care team and his nurses, who were there to help us understand what was going on. 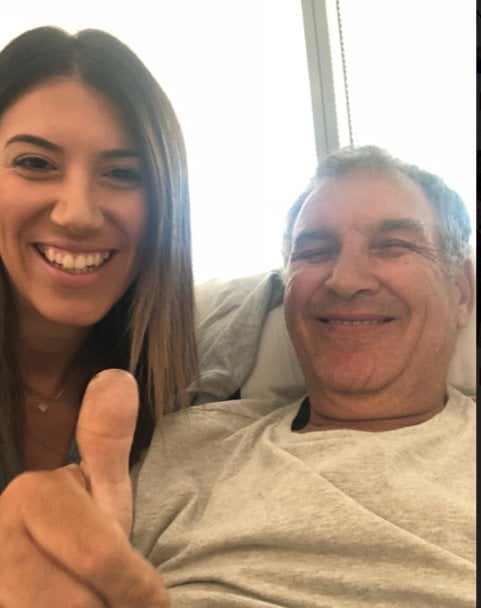 They encouraged us to talk to Dad about how he was feeling and what he was going through. By doing so, it ensured that he understood the information that was being provided by his health care team and talking to others allowed him to really digest what he was facing and the treatment process.

When I connected with Prostate Cancer Foundation of Australia, I learned that many men in his situation have a 70 per cent increased risk of suicide death compared to average, which really shocked me and brought home the detrimental physical and mental health impacts of what he was experiencing. I also found out that 72 per cent of men don’t seek help for their distress, which is so much like my dad - never wanting to burden anyone with his pain.

Eventually though, we started to feel like the cancer was behind us. But after almost 12 months of good results and what seemed like stability, Dad’s PSA level started to increase again.

Prostate-specific antigen (PSA) is a protein produced by the prostate, and it’s one of the warning signs for men in my Dad’s situation. The PSA is monitored very closely by oncologists at each appointment and is calculated through a simple blood test.

After seeing that the levels were doubling, Dad was sent to do a PSMA-PET scan to see if they could identify where the cancer was. This test is a highly effective way for doctors to pinpoint clusters of cancer cells if they exist. The results of the scan came back, and the radiologist found cancer cells in the lymph nodes around his abdomen that required more targeted radiotherapy treatment.

The next few years became a cycle of radiotherapy, hormone therapy, chemotherapy and steroids. It was exhausting for Dad, both physically and mentally. He had mood swings, which was so uncharacteristic for him, but something that is common for someone going through chemotherapy and hormone therapy. He didn’t want to leave the house because of his incontinence, and there were days he simply didn’t have the energy to move from the effects of the chemotherapy.

Soaking his hands and feet in Epsom salts became a daily ritual to try to calm the pins and needles in his fingers and toes. He lost his hair and faced the discomfort of fluid retention. His self-esteem took a battering. The pain of prostate cancer is intense. It takes everything away.

Towards the end, Dad was going through his last shot at a treatment for his prostate cancer which was a trial drug and involved radioactive injections. Finally, something that seemed to work!

One evening, just two days after his second treatment, he had a fall and broke his leg. Another setback. His bones were so brittle after years of treatment that he needed surgery and rehabilitation.

Just as we thought the worst was behind us, Dad started to lose sensation in his good leg. They couldn’t make sense of what was happening - his recovery was tracking so well. He was rushed back to hospital and new scans revealed the cancer had spread and was pressing on his spinal cord.

He had emergency surgery to remove as much of the cancer that they could, but he was paralysed by it. None of us could comprehend that our six-foot pillar of strength was not going to be able to walk.

He was angry, frustrated, sad, but he was determined to move and not be confined to a bed.

Listen to The Quicky, Mamamia's daily news podcast. On this episode, we chat about what men want you to know about testicles.

Whilst Dad faced the physical battle in hospital, we did our best, making modifications to the house to allow for wheelchair access in an effort to get him home.

In rehab, Dad learned to use a wheelchair unassisted, using a sideboard to get himself in and out of bed. But that wasn’t good enough for him, he was determined just to stand with a frame. He did. Dad persisted through back-to-back radiotherapy sessions for over a week and never missed a gym session to work on his leg strength. That was my Dad.

Just as we were getting ready to bring Dad home from the hospital, everything went wrong. One morning his speech became strange, and he didn’t seem with it. My mum asked the nurses and doctors to run some further tests because something wasn’t right.

The rehab doctors ordered scans and confirmed our worst nightmare. Bleeding on the brain.

More surgeries followed to relieve the pressure on the brain and he continued to fight and pulled through against the odds. We were in awe of him.

Again the rehab became the focus, but we knew that Dad’s body was really deteriorating despite his want to get better.

The last few weeks still seem like such a blur. Dad started to lose his appetite. The cancer had spread so much throughout his body that he just became too weak.

We begged him to hold on that little bit longer, so we could get him home to care for him, but it wasn’t to be. Dad passed away on a Saturday with Mum by his side. It was September 26, 2020.

This September, my sisters and I are celebrating and honouring his life by taking part in Prostate Cancer Foundation Australia’s annual awareness and fundraising campaign, The Long Run.

Last year my goal was to do 67kms throughout the month - one for every year he lived. This year I am running again for Dad. Everyone is encouraged to run 72km for their dad, uncle, brother or partner and for the 72 per cent of men who don’t reach out for help.

By taking part in The Long Run, I know I am helping make other people’s lives better, the way my dad Angelos did ours. It would be great if you could join me, for my Dad and for yours.