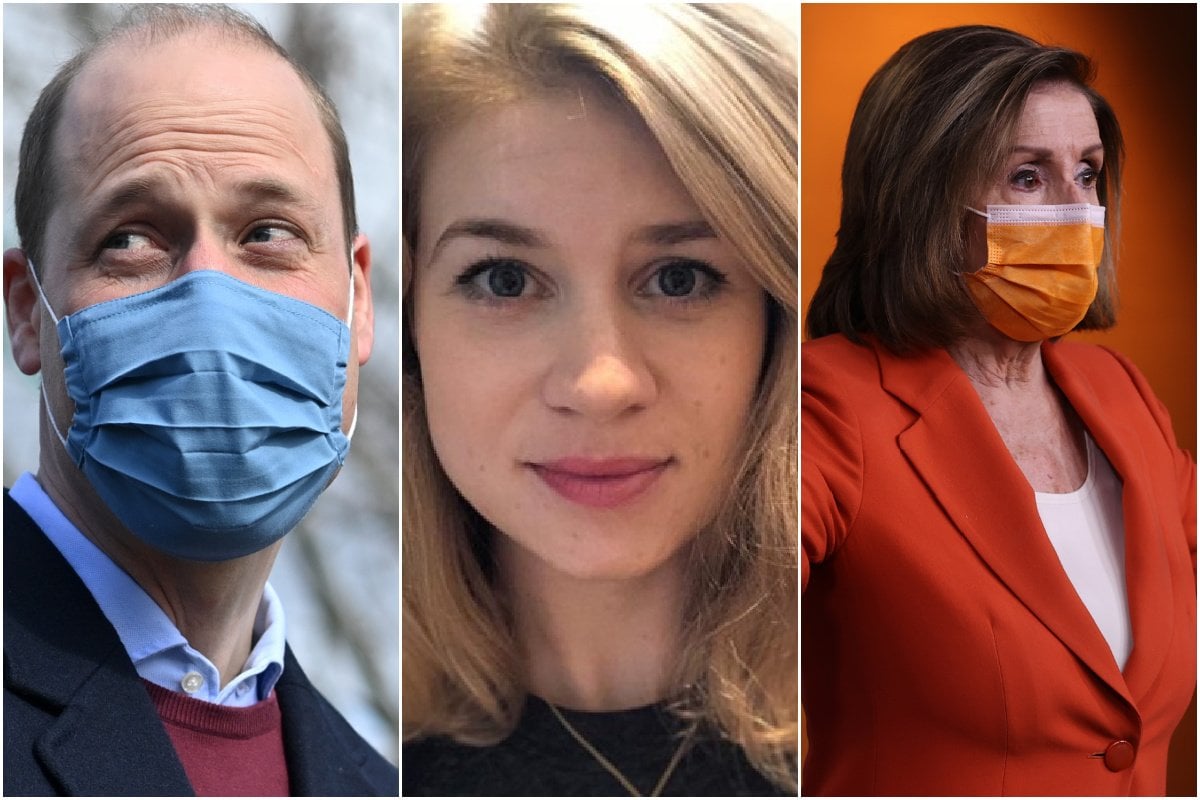 Prince William says the royal family is not racist.

Prince William says the royals are not racist after Meghan, wife of his younger brother Harry, said one unnamed member of the family had asked how dark their son Archie's skin might be.

Meghan, 39, made the allegation during an interview that she and Harry, 36, gave to Oprah Winfrey and which was aired on Sunday.

On a visit to a school in east London, William said he had not talked to Harry since the interview was broadcast just over three days ago.

“We are very much not a racist family,” Prince William told reporters during a visit to a school in Stratford, London.

When asked if he had spoken to Prince Harry after the Oprah interview, he added, “No, I haven’t spoken to him yet, but I will do.”pic.twitter.com/MjTOeH7u6Z

Asked by a reporter if the royal family was racist, William said: "We're very much not a racist family."

Queen Elizabeth will reportedly speak with Harry and Meghan sometime within the next few days.

Suspected human remains have been found by British police searching for a missing woman, London police chief Cressida Dick says, following the arrest earlier of a police officer on suspicion of kidnap and murder.

Sarah Everard, 33, was last seen on the night of March 3 as she walked home from a friend's house in south London.

"This evening, detectives and search teams investigating Sarah's disappearance have found very sadly what appears to be human remains," Dick, the head of London's Metropolitan Police, said in a televised statement on Wednesday.

"The discovery was made in an area of woodland in Ashford in Kent. As you can imagine, at this early stage we are not able to confirm any identity, and indeed that may take us some considerable time."

Earlier, police said the arrested officer, whose job was to guard diplomatic buildings, was in custody after being detained on Tuesday evening. The man in his 40s is also under suspicion of indecent exposure.

Dick said the news of the officer's arrest had sent "waves of shock and anger" through the police force and the public.

Iceland, Norway and Denmark have suspended the use of the AstraZeneca COVID vaccine while the EU's medicines regulator investigates if it is linked to a number of blood clots in patients.

Danish Health Minister Magnus Heunicke made clear the pause was a "precautionary measure," saying it was not possible yet to draw conclusions.

Speaking to CNN, Kjartan Njálsson, assistant to the director of health in Iceland, said that although there had been no reports of patients developing blood clots in their country, they were waiting for advice from the European Medicines Agency (EMA).

That's despite the EMA recommending against the suspensions, noting that the number of blood clots seen in vaccine recipients was no higher than the rate among people who had not received the shot in Europe.

Australia's top health bureaucrat concedes it is unlikely all adults will be offered two coronavirus vaccine doses by the end of October.

The federal government last year declared a target for full vaccination to be available by the end of October.

Health Minister Greg Hunt last month said people would be offered at least a first dose after new evidence emerged about the AstraZeneca vaccine, which is more effective with a 12-week gap between jabs.

.@ScottMorrisonMP had one job. Get the vaccine rolled-out.

He repeatedly promised that 4m Australians would be vaccinated by the end of March.

Health Department secretary Brendan Murphy said it was unlikely the government's original goal could be met.

"We don't know whether we'll be able to achieve two shots by October," he told the Senate's coronavirus response committee on Thursday.

"All I'm saying is that with a 12-week interval it's going to be difficult."

The Morrison government has rejected claims of favouring coalition and marginal seats through half-price flights to more than a dozen regional tourism destinations.

The $1.2 billion tourism and aviation rescue package will provide an estimated 800,000 subsidised airfares on government-nominated routes.

In Queensland the government has listed the Gold Coast, the Sunshine Coast, Cairns, and the Whitsundays and Mackay region including Proserpine and Hamilton Island.

Uluru and Alice Springs in the NT, the Tasmanian towns of Launceston, Devonport and Burnie, Broome in WA, Avalon near Melbourne, Merimbula in NSW and SA's Kangaroo Island are also included.

The federal government's billion dollar tourism rescue package was supposed to reconnect Australians, but it only seems to have left the country more divided.@SarahStewart_9 and @R_DAlessandro9 have the latest developments. #9Today pic.twitter.com/gbTajO2KUJ

The destination list covers eight marginal electorates including four that are Labor-held, three with coalition MPs and one independent seat.

Labor leader Anthony Albanese said it was a predictable approach from the government noting Launceston, Devonport and Burnie were included but southern Tasmania missed out.

"I wonder what the distinction is between the two? The two marginal seats are in northern Tasmania," he said.

But the government is adamant selections were made based on how much local economies rely on tourism and aviation.

"I'd say it's absurd, it's ridiculous. I mean, the northern parts of Tasmania is the regional part of the state which needs that additional support," he told reporters in Sydney.

"We already have lots of flights going into Hobart."

Discounted fares will be available for 13 hard-hit destinations. With a few conditions.https://t.co/3ZQ7R7C95l

Democrats are making a new push to enact the first major new gun control laws in the US in more than two decades.

The US Senate is trying to pass two bills that would require background checks on all firearms sales and transfers and also allow an expanded 10-day review for gun purchases.

Similar bills were passed by the House in 2019, shortly after Democrats won the majority, but languished in the GOP-controlled Senate for the next two years.

If passed in the Senate, it would represent the first significant federal gun control law in more than 25 years. https://t.co/NqMy3c90rO

"The gun violence crisis in America is a challenge to the conscience of our country – one that demands that we act," Speaker of the House Nancy Pelosi said during floor debate on the bills Wednesday. "These solutions will save lives."

US President Joe Biden has signed his $US1.9 trillion ($A2.4 trillion) stimulus bill into law, commemorating the one-year anniversary of a US lockdown over the coronavirus pandemic with a measure designed to boost the economy.

The Democratic-led US House of Representatives gave final congressional approval to the measure on Wednesday, handing the Democratic president a major victory in the early months of his term.

"This historic legislation is about rebuilding the backbone of this country," Biden said before signing.

Biden signed the measure before a prime-time speech he plans later on Thursday to herald the anniversary of the lockdown, urge vigilance as the pandemic rages and offer hope amid a growing number of vaccinated people across the country.

The package provides $US400 billion for $US1,400 direct payments to most individuals, $US350 billion in aid to state and local governments, an expansion of the child tax credit and increased funding for COVID-19 vaccine distribution.

Biden said on Wednesday he would use his 8pm address to discuss "what we've been through as a nation this past year".

"But more importantly, I'm going to talk about what comes next. I'm going to launch the next phase of the COVID response and explain what we will do as a government and what we will ask of the American people," Biden said.

Former Good Morning Britain host Piers Morgan stormed off the set of the show and later quit it altogether after being criticised on-air by a colleague for "continuing to trash" the duchess after earlier this week saying he "didn't believe a word" of Meghan and Prince Harry's Oprah Winfrey interview.

Morgan was widely condemned for his comments about Meghan's mental health and not "believing her" when she said she was suicidal, with ITV receiving more than 41,000 complaints over his on-air berating.

Now Sharon Osbourne is facing calls to step down from The Talk, after she went on a bizarre tearful defence of Morgan on-air.

karen osbourne begging to be canceled live on the talk right now pic.twitter.com/YU217LK5rL

The Sun reports she was “left in tears" when she learned her co-host had quit.

- Rules are being eased for people flying into NSW from New Zealand, with arrivals no longer required to quarantine. The new rules apply from 12.01am on Friday.

- Prime Minister Scott Morrison has told the IOC that a 2032 Games in Brisbane would see Australia become a "certain partner in uncertain times" for the Olympics.

Reply
Upvote
@mamamia-user-236023277 exactly- Germany had built vaccine delivery hubs all over the country even before they had vaccine approval. Our government dont seem to have ability to plan more than one step ahead.
C
cat a year ago