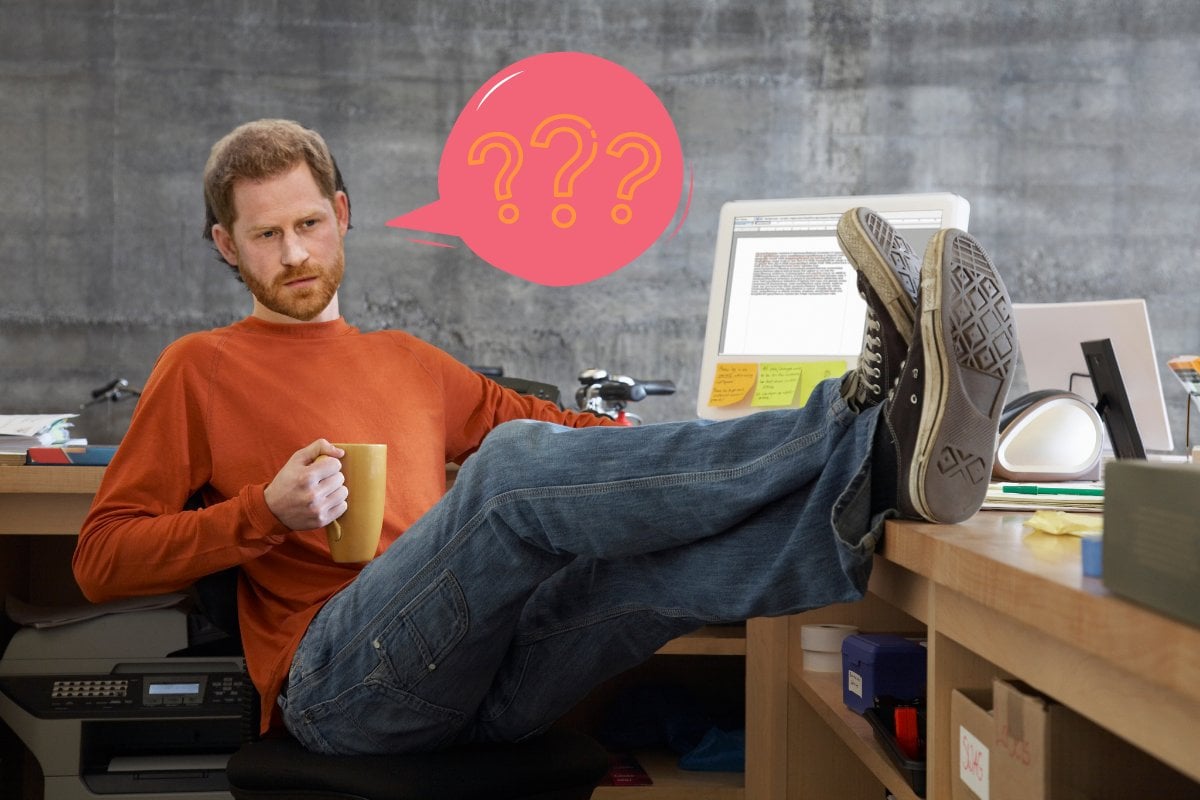 Prince Harry is putting his plan to dismantle systems of privilege into action, starting with entering a C-suite job without any prior experience.

The Duke of Sussex has taken on a role as 'chief impact officer' at Silicon Valley mental health start-up BetterUp.

The website for the company, which was founded in 2013 and provides mobile-based professional coaching, counselling and mentorship, lists the prince as a member of its leadership team.

We are honored to welcome Prince Harry, The Duke of Sussex as BetterUp’s first Chief Impact Officer.

Learn more about how he will work to champion the importance of focusing on preventative mental fitness and human potential worldwide. https://t.co/MCAIADrdfc pic.twitter.com/kPL7jTZOGX

Rumour has it Harry was very excited to join the rat race and up for the challenge of living on a measly six-to-seven-figure salary.

Harry's first day began with an alarm at 6am. He was already awake, restless with the anticipation of changing the damn world.

He rubbed his eyes, chucked on a grey suit that screamed 'I'm trying hard to look like I'm not trying hard', kissed a sleeping Meghan and Archie goodbye and headed for the door.

He paused. There was one thing he hasn't considered.

Harry did a quick Google: "how to use a bus". Cash? A bus card? What on earth is that? He thought.

It all sounded too complicated, so he called a private driver. Baby steps.

Arriving at the office with a spring in his step, Harry proudly pushed the buttons in the lift. Another person jumped in as the doors closed.

The person just... stared at him. They rode the lift in excruciating silence.

He hopped out on his company's floor and spied his boss across the room. They'd met only a couple of times before via Zoom, but Harry recognised him straight away because of the AirPods and hoodie, which looked daggy, yet somehow still cost $300.

"Good morning sir! What a beautiful morning! When may we have a chat, I have so many ideas, I really think I can make a huge difference, I was thinking..."

"Woah there, Harry! I haven't had a coffee yet, look, go get yourself settled and we'll catch up later," his boss replied, holding his arms up before walking away with a chuckle.

Interesting. Harry glanced around. Everyone else looked equally unenthused, except for the two young guys in flannel shirts playing table tennis.

Harry wandered through the office, finding his way to the small kitchen. There was absolutely no sign of a chef.

He looked around aimlessly.

A middle-aged man walked in clutching his drink bottle, and headed straight for the Zip tap.

"Pardon, where are the crumpets?" Harry asked him.

"Uh... sorry, all we have is this communal bread and peanut butter," the man replied, screwing his drink bottle lid up.

"Oh okay, thanks, do you think you could show me..." Harry said, trailing off as his new colleague backed away slowly.

Harry looked at the toaster with fear. How does one... use this?

Narrowly avoiding an office fire, Harry found himself a desk spot by the window and bit into his charcoaled toast. Outside, he could see the hustle and bustle of other Silicon Valley types going about their days.

He looked down at his suit and suddenly realised he wasn't going to hoity-toity royal charity events anymore. No, he was in a hoity-toity San Francisco office. A suit simply wouldn't do.

He Googled 'Patagonia jacket' and added 12 to cart immediately.

After unsuccessfully trying to set up his work email address, Harry called IT for help.

The man on the other end of the phone spluttered: "Sir, uh, Harry, your highness sir, uh, it's Duke dot Sussex".

By 10am everyone else in the office had stopped talking about the drama on last night's The Bachelor episode and begun flicking between various internet shopping tabs on their own computer monitors.

Harry tried to tell the woman opposite him about a cool idea he'd had for an event, but she just asked him if Kate Middleton was really as nice as she seemed.

But what about WORK?

Ah, 11am. It was time for a company-wide meeting. Harry was excited; he couldn't wait to tell everyone how pleased he was to be there. They'd finally listen to his ideas!

The meeting was just about last week's KPIs. And did anyone want to be a fire warden?

Harry was literally the only person to raise his hand.

After the meeting, Harry shuffled awkwardly until he and his boss were the last ones in the room.

"Sir, I have to ask, do we regularly have a 50 minute meetings to discuss things that could've been a two-line email?" he asked.

"Yes, exactly," the boss responded. "And then we'll send an email detailing the outcomes of the 50 minute meeting that could've been an email."

He patted Harry on the shoulder and left the room.

Lunch time came around slowly, and Harry was itching for some fresh air.

What a weird morning, he thought. Why did it seem like no one else wanted to be there?

He grabbed his brown paper lunch bag - he'd gotten his and Meghan's chef to whip up some sandwiches the night before, just avocado and cucumber, nothing fancy - and sat outside. Alone.

The rest of the afternoon was spent mostly in silence, besides the highly inappropriate playlist Mike in accounts played through the office UE Boom.

At one point the woman next to him - Sarah, from marketing - asked what shade of blue looked best on a EDM template and a guy called Blake asked if he wanted to sign up for his team's social dodgeball team.

Harry declined, because he only knew how to play rugby.

Finally 5pm rolled around and he began to pack up his stuff, feeling dispirited.

Why did everyone else act like they were only there because of a flawed social contract in which they needed to do something they didn't necessarily enjoy in order to afford a roof over their heads?

Still not feeling up for the bus, he called the same driver from the morning to take him home.

"How was your day, honey?" Meghan asked, mid child's pose on her yoga mat, as he walked through the door.

Harry rolled up his shirt sleeves and wandered over to the couch, shoulders slumped.

"There's so many meetings," he said.

"They could definitely be emails.

"And there's an annoying guy two desks down who has never heard of noise-cancelling headphones.

"I did go out for a walk at lunch, which was nice. But when I returned someone had opened a can of tuna in the office kitchen? Tuna? I thought that was just for cats," he sighed.

"No one seemed to be enjoying themselves at all. And oh my god, I'm tired. You know we're expected to be there every single day?" he sighed.

"Oh, and Mike in accounts asked me to fill out some forms. What do you know about paying tax..."