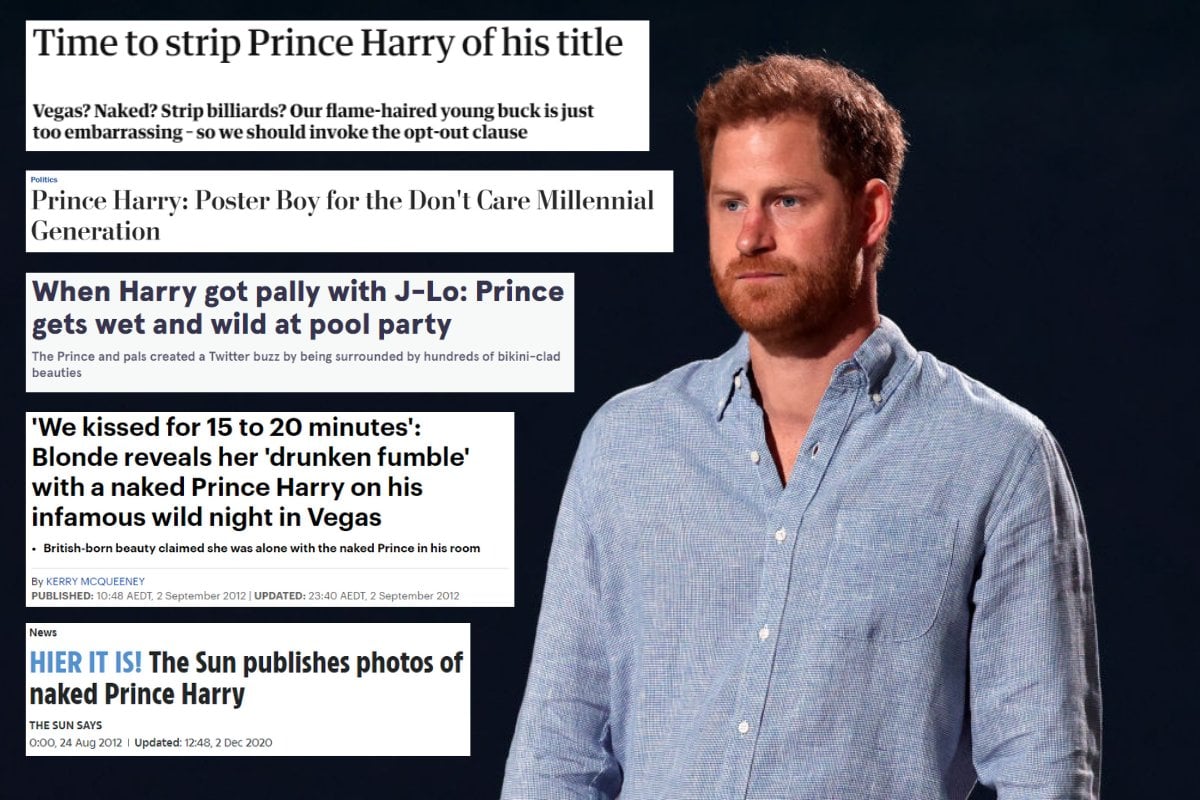 A naked man, cupping his genitals.

A silver pendant, hanging on a leather thong.

A game of strip billiards, a screaming air guitar.

These things were all subjects for discussion, back in 2012, in the ancient halls of Westminster, the seat of British parliament, after one 27-year-old Prince had been on quite the bender.

The topic was the invasion of Prince Harry’s privacy after one UK tabloid chose to run grainy images of his naked body on their front page, alongside the cringingly brilliant headline: Heir It Is!

It was a different time. Ten years ago and, at the same time, about a trillion light years.

This was a planet far, far away where celebrities were not yet confiscating camera phones and issuing NDAs at the doors of private parties.

A time when Harry was still playing along with the unofficial royal motor of “Never complain, never explain”.

And a time when printed tabloid newspapers were scrambling to catch up with the relentless forward motion of the many-tentacled beast of the Internet.

When The Sun newspaper ran the photos described above, they had already featured on TMZ - the gossip site that changed the game of how the paparazzi economy worked.

Until TMZ came along, pictures taken by paparazzi photographers were sold through picture agencies to magazines and newspapers for a sliding scale of thousands, depending on their desirability and salaciousness.

But TMZ sent its own photographers out into the LA night, and bought photos directly from anyone with a camera phone, ripping the images up online within minutes and hours of them being taken, leaving lawyers chasing behind, trying to catch-up.

The Prince Harry Las Vegas pictures, taken not by a professional photographer but by an opportunistic civilian with their new-fangled camera phone, became something of a test case for the ethics of privacy in a whole new age.

And the way it played out, well, it provides just one of the items on a very long list of why Prince Harry hates the press. And rues the invention of camera phones.

How did we get to that Vegas suite? With the naked prince and the air guitar and the drunk cops and the sticky billiard table?

In 2012, Prince Harry played a very different role in the public's consciousness than he does today.

Now, he’s a person who wins awards for his contribution to racial equality. A man who promotes the benefits of therapy and meditation, who talks authentically about his fragile mental health. A man who keeps chickens. A man at the head of his own charitable foundation. A father of two. A husband. An... American.

But in 2012, Prince Harry was considered a playboy action man.

It was never an entirely fair assessment, since he had already founded a charity to help vulnerable children in Africa, and was an active member of the armed offices. But, in a stuffy and staid royal family who had just suffered through a couple of decades of loss and scandal, Harry was certainly The Fun One. And The Troublesome One.

If Prince William was heir to the throne, earnestly kingly, the one who married his university girlfriend, moved to the country and flew a coast-guard helicopter, Harry was his wild-man foil.

He had been photographed, famously, dressed as Nazi solider, cigarette in hand, at a friend's fancy-dress party.

He had set up a nightclub in the basement of Highgrove, his dad's country palace, where he and his mates got in such trouble for smoking weed Prince Charles made them tour a drug rehab facility to sober up.

He was regularly photographed “falling out of nightclubs”, bleary and flailing at the ever-present paps, and he dated young, posh blonde ladies with names like Chelsea and Cressida, and his friends were all from Eton, co-owned champagne bars and facilitated his rebellion with their discretion.

But Harry was also a soldier. Not the kind who just wears the uniform and the medals and turns up at ceremonies, but an active member of the RAF who was deployed on the front line.

In fact, the fateful trip to Las Vegas was a jolly planned to fall between tours of Afghanistan, where Officer Wales was flying helicopters, and risking his life alongside many other young people who did not go to Eton, did not live in a variety of palaces, and who he would go on to passionately defend and celebrate, not least by founding the Invictus Games for injured veterans. Prince Harry, in 2012, was doing what he loved,

And, he was letting off steam.

A $1000-a-night suite at the MGM Grand. A couple of Etonian best mates. His two police-officer bodyguards, who went everywhere with him, always. A pool party called Wet Republic. A day on the beers in the sun.

A second location. The bar at the Encore Wynn..

Room 2401. The billiard game where the clothes come off. A camera phone. A call to TMZ.

And within hours, a flagrant invasion of privacy becomes a story in the public interest, all by the nature of Prince Harry’s birthright.

Because, as the British press tied themselves in knots working out whether they could run the images of Harry sheltering his modesty, the indignant hand-wringing that justifies every hidden camera aimed at an HRH had begun.

This is a public interest story. Because:

A) Who is paying for those drinks, for those blind-eye turning policemen? Who paid for those board shorts? That bad hat? Who even paid for that leather thong necklace (actually, it turned out to be a gift from his ex, Chelsea Davy, but still). TAXPAYERS, that’s who.

B) This looks like dangerous behaviour for a royal. What if any of those naked young people partying with the Prince are… spies.

C) The pictures are all over the Internet, anyway.

The Sun, the biggest tabloid newspaper in Great Britain, sold millions of copies daily in its heyday. And its editors decided to ignore the many letters it had received from the royal lawyers in the week of Vegas-gate and run with Heir It Is!, alongside the passive-aggressive justification of “Pic of Naked Harry You've Already Seen On The Internet”.

At the time, the managing editor David Dinsmore said they’d thought about it for a while and decided: "For us this is about the freedom of the press. This is about the ludicrous situation where a picture can be seen by hundreds of millions of people around the world on the internet but can't be seen in the nation's favourite paper read by eight million people every day.

"This is about our readers getting involved in the discussion with the man who is third in line to the throne - it's as simple as that."

The man who was third in line to the throne was not impressed. But The Sun weren’t done. It was Harry’s fault, they said, that they had to run these pictures at all. He had invaded his own privacy and now he had to pay.

"He often sails close to the wind for a royal - but he's 27, single and a soldier,” The Sun reps said in a written statement on the matter. “We like him. We are publishing the photos because we think Sun readers have a right to see them. The reasons for that go beyond this one story."

“The photos have potential implications for the prince's image representing Britain around the world. There are questions over his security during the Las Vegas holiday. Questions as to whether his position in the Army might be affected."

And so the naked pictures stood. They stood despite a major inquiry that was underway at the time to reestablish the rules of engagement that the media had with the privacy of individuals.

They stood during a debate in the House of Parliament when one Boris Johnson, not yet the Prime Minister, declared that what would have been a travesty was if a young man was too afraid to get naked in public.

"I think it'd be disgraceful if a chap wasn't allowed to have a bit of fun in Las Vegas,” Johnson said. “The real scandal would be if you went all the way to Las Vegas and you didn't misbehave in some trivial way." Quite.

And they stood as another way Prince Harry saw his dignity chip-chipped away at as he tried to build a life for himself as the press that had hounded his mother hounded him.

A decade on, Harry’s perspective on this time has shifted.

Dax Shepherd brought it up, along with a glowing assessment of Harry’s ripped physique, and was humoured by the Prince. "At least I wasn't running down the strip, stripping naked," he said, with something like laughter.

Perhaps if you’ve faced, as he has, a reckoning around the historical treatment of your mother, your wife being subject to thinly-veiled racist abuse and a lifetime of people, just like that party-attendee with the early camera phone, selling little pieces of your life for dollars, you gain perspective on the nation seeing your bum when you were in the best shape of your life.

Lowbrow is a podcast about big moments in pop-culture history, told through the eyes of two generations. Prince Harry in Las Vegas is the latest episode. It's hosted by Holly Wainwright and Emily Vernem, and you can listen, here.