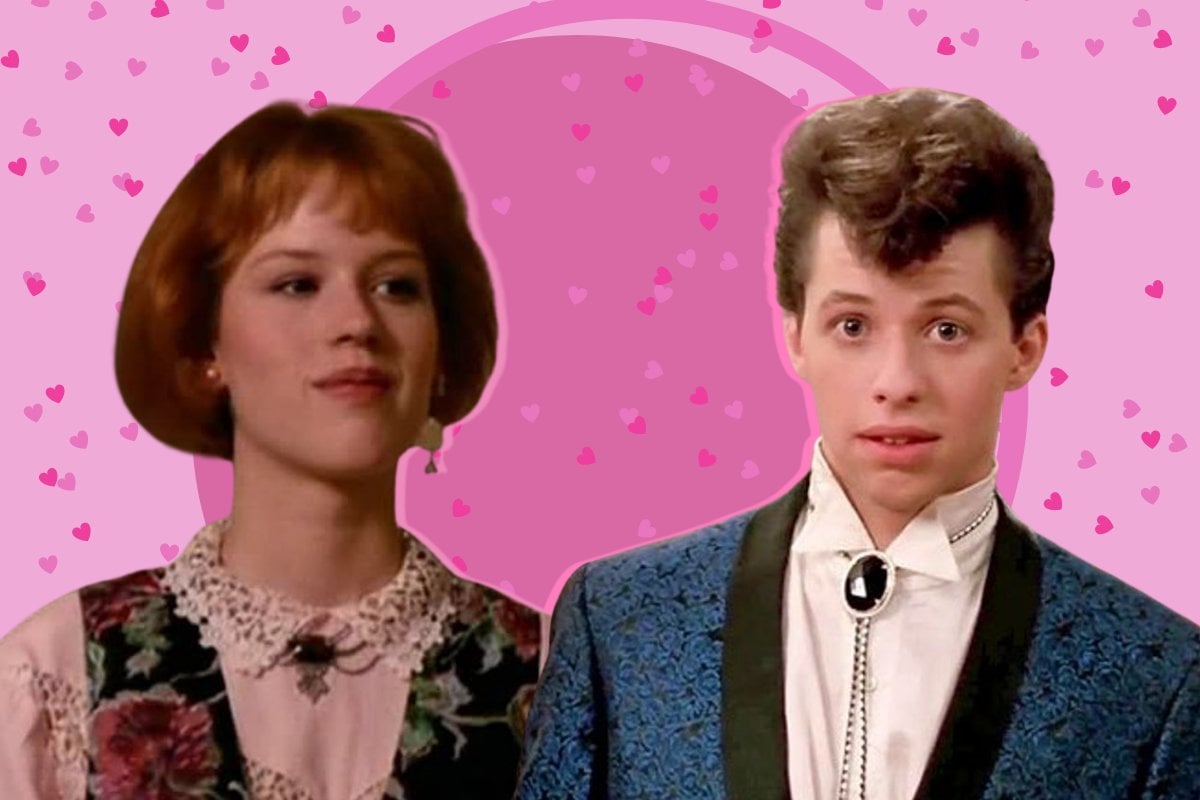 In the 80s, John Hughes cemented himself as the king of teen movies with a string of hits that are now considered classics, like Sixteen Candles and The Breakfast Club.

In 1986 he released Pretty in Pink, depicting the love story of Andie, the girl from 'the wrong side of the tracks,' rich-kid Blane, and the disapproving classism of their schoolmates.

Watch: The Pretty in Pink trailer. Post continues below video.

The film is notable as his last collaboration with Molly Ringwald, becoming a cult classic coming-of-age story. Oh, and it still has one of the best soundtracks ever.

February 2021 marks Pretty in Pink's 35th anniversary, so to celebrate, here are 14 interesting facts about to the venerated teen movie, available to stream on Stan in Australia.

1. The role of Andie was written for Ringwald, but she wasn't the studio's choice. 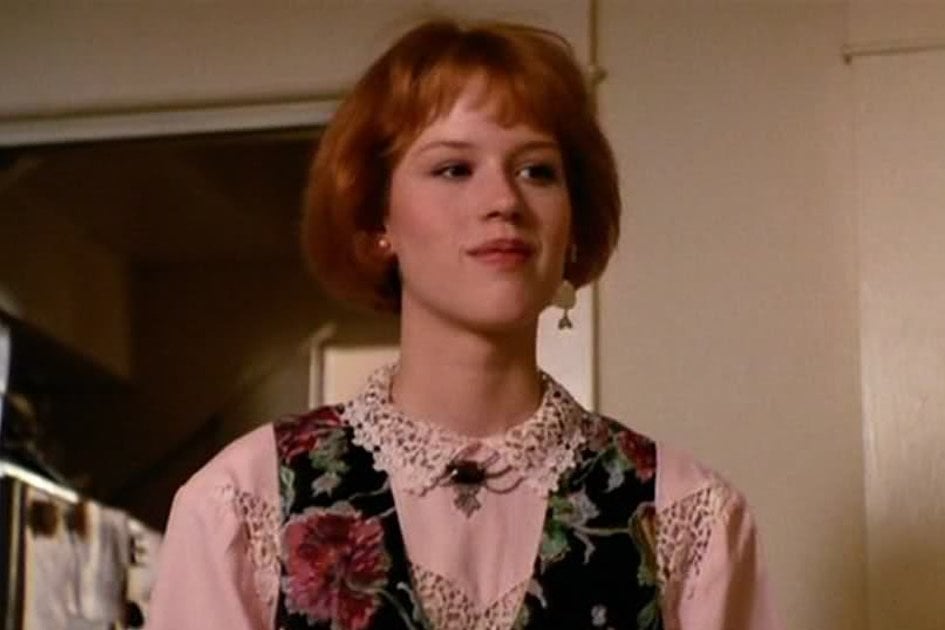 Hughes wrote the role of Andie for Ringwald after they collaborated in Sixteen Candles, but the movie studio originally wanted Flashdance star Jennifer Beals to play Andie.

"As far as the character, she’s so much like I am," Ringwald said in a 1986 interview with MTV.

"If anyone else played that part it would be like somebody wearing my clothes, you know? I had to do it."

2. The film was named after Ringwald's favourite song.

The movie is named after a 1981 song by The Psychedelic Furs, which Ringwald introduced Hughes to.

He said in a 1986 interview with Seventeen, "the title stuck in my head".

The band recorded a poppier version of the song for the film's soundtrack, but lead singer Richard Butler thought Hughes misunderstood the song's meaning. 'Pretty in pink' was a metaphor for being naked, and it was about people laughing behind the back of a woman who 'sleeps around.'

"Molly Ringwald took it to John Hughes and said, 'I love this song, we should use it for a movie.' He took it away, listened to it, and wrote Pretty In Pink, which totally got the whole thing wrong," Butler told Songfacts.

"It was nothing like the spirit of the song at all. It's really hard to say whether it was damaging for us. I suppose we got tied in with the story of the film, and if that's what people thought the story was about, and didn't look much further than that, they were getting a very false impression," he said.

3. Andie and Duckie originally ended up together.

The role of Duckie was originally offered to Ringwald's The Breakfast Club co-star Anthony Michael Hall but he felt it would just be a rehashing of that movie so passed on the role. 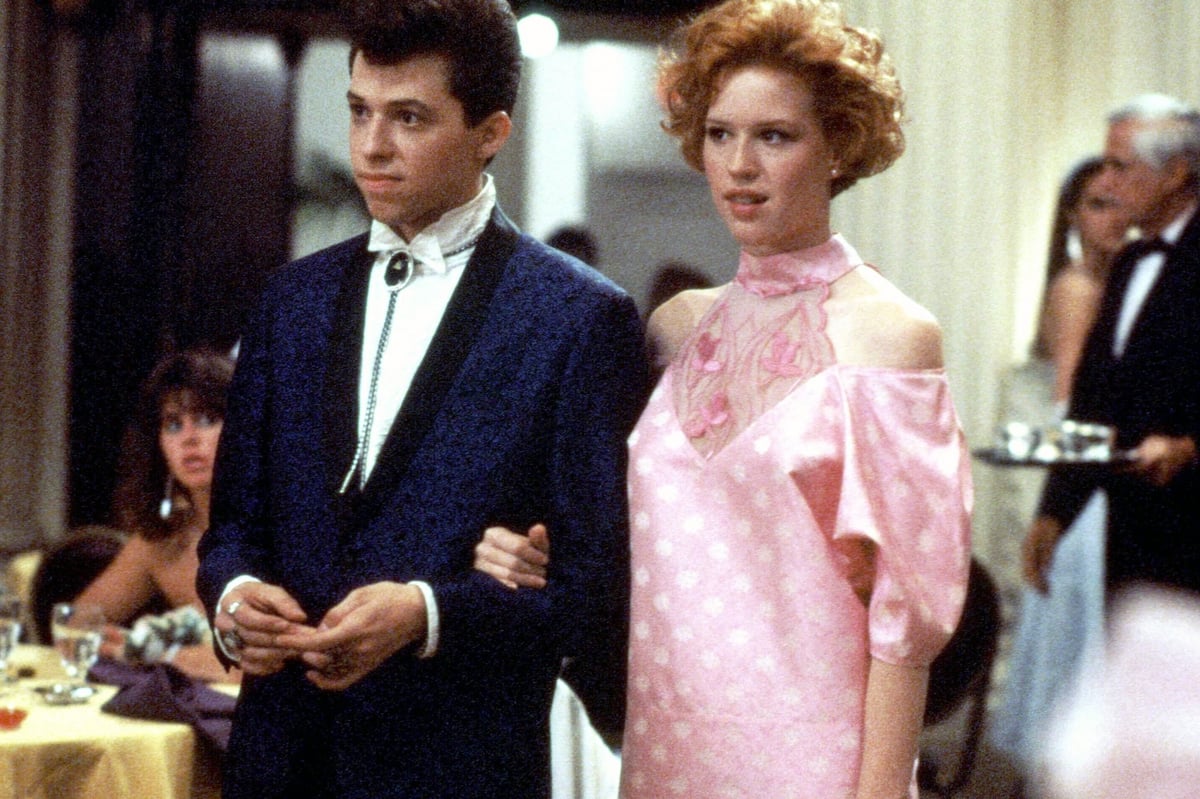 This resulted in a complete rewrite of the ending, because originally, Duckie got the girl.

"Molly dropped the bomb that she would've been fine with the original ending if Robert Downey Jr. had played Duckie, but since it was me, she just couldn’t see it," Cryer said on the film's 2006 'Everything's Duckie' DVD edition.

Deutch later seemed to regret his casting choice too: "What I learned was that there are no rules, in the sense that life isn’t fair," Deutch said in brat pack book You Couldn’t Ignore Me.

"Duckie should have the girl and it was all built for that and it was designed for that. And I could have ended that way, had I not f***ed with one thing: I cast Jon Cryer."

Test audiences also disliked the Duckie and Andie ending, so it was reshot with Blane and Andie getting together.

4. Andrew McCarthy was cast thanks to Ringwald. 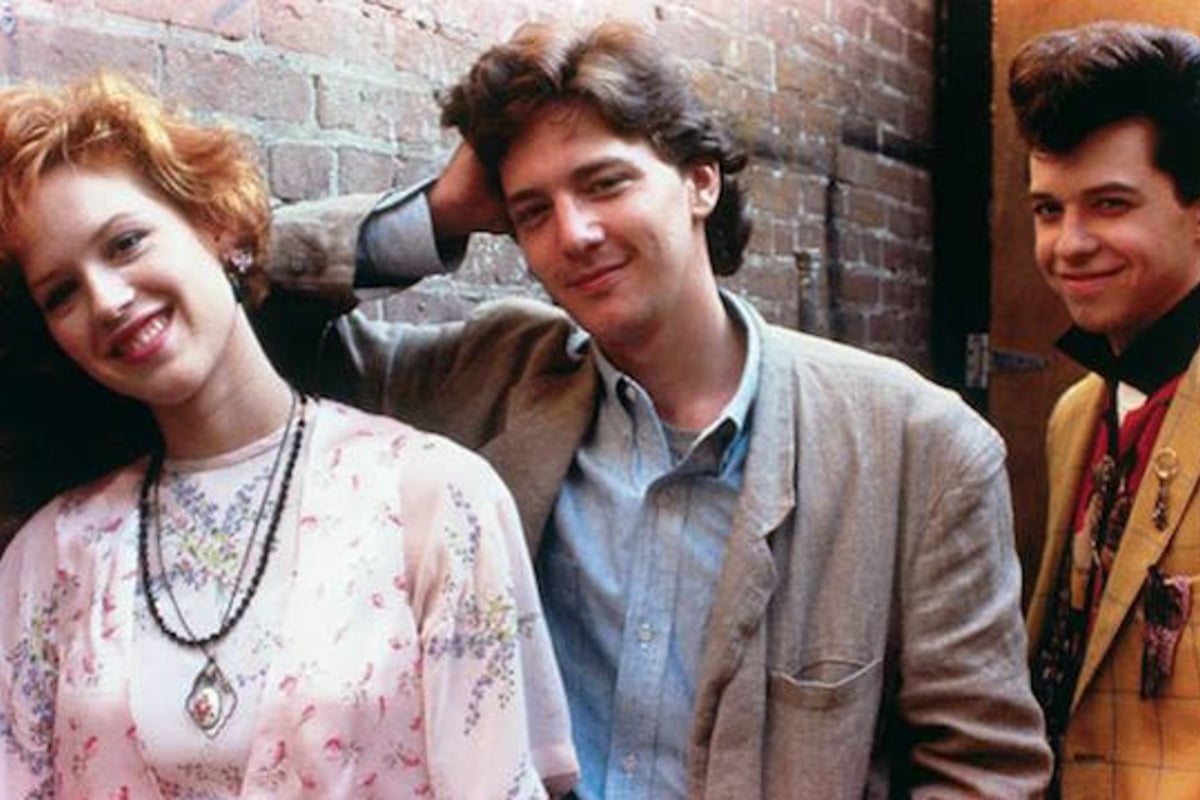 The filmmakers wanted Blane to be "a hunky square-jawed jock" but Ringwald, who had some say in casting, pushed for McCarthy after his audition.

"That's the kind of guy I would fall in love with," she recalled telling Hughes and Deutch in You Couldn't Ignore Me.

"I did push for him to get hired. I thought he was cute and I thought, if I thought he was cute, then Andie would think he was cute! I liked how he wasn't typical, and he seemed so right for that part. Andrew McCarthy has always seemed so tortured with indecision, at least at that time, and so was Blane, who really is a tortured soul. And Andrew and his eyes - there's just nobody who has those tortured eyes."

5. 'Duckie's Dance' was originally set to a Mick Jagger song.

The iconic 'Duckie Dance', where Duckie entertains Andie and Iona at record store Trax, was originally set to Mick Jagger and Michael Jackson song 'State of Shock', then The Rolling Stones' 'Start Me Up' before it was finalised as 'Try a Little Tenderness' by Otis Redding.

"It was meant to be comedic, trust me," Cryer told Entertainment Weekly in 2006.

"I performed a chunk of it for [Deutch], and he thought it was very funny. And he was like, 'Just do 'Start Me Up','' because I think the Michael Jackson portion was just too ridiculous for him. Then we couldn’t get the rights to 'Start Me Up' anyway. It was [Deutch] who found the Otis Redding song ['Try a Little Tenderness'].

"Nobody really anticipated that I was gonna go to town on it the way that I did. Although, I completely blame [Deutch], because he got me together with Kenny Ortega the night before [we shot the scene]. And getting together with a seriously world-class choreographer, you're gonna come up with something."

6. McCarthy was wearing a wig in the final scene.

As mentioned, the original ending saw Duckie and Andie end up together. When that was scrapped, the cast needed to return for reshoots.

By the time this occurred, McCarthy was already performing in New York in a play which required him to shave his head and lose a lot of weight.

If you look closely, you'll find Blane looks much more gaunt and has a... questionable hairpiece towards the end of the film.

7. It was filmed in the same high school as Grease.

If the high school featured in Pretty in Pink looked familiar, that's because it was the same school used for Grease eight years earlier.

8. One of the stars died before the film premiered.

Young actress Alexa Kenin, who plays Jena in the movie, died in September 1985, five months before the film's release. 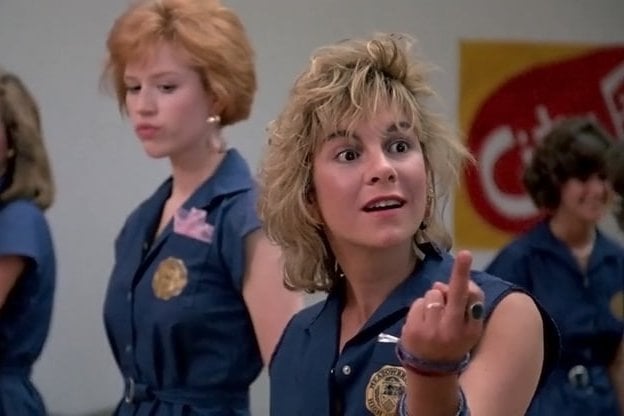 Her official cause-of-death has never been released, as per her family's request.

Pretty in Pink shared a dedication to Kenin in the credits, and to set and production designer Bruce Weintraub, who died from AIDS aged 33 in December 1985.

9. James Spader turned down the role of Blane to play the villain.

James Spader's career was still in its early stages when he was cast in Pretty in Pink. He was originally offered the role of Blane, which most young actors would've jumped at, but Spader turned it down to instead play the more minor role of Steff.

When asked why, Spader said it was more fun to play the villain... which appears to have remained his motto for the last 35 years.

Ringwald and McCarthy became good friends on set, and regularly ate lunch and hung out between takes, but Cryer wasn't really included.

Cryer later said he thinks it was because he was very outgoing and extroverted, while his co-stars were more introverted.

"That could have worked out great, that dynamic, but it didn’t. I think they were irritated by me from day one."

He elaborated to MSN, saying "I think I made them uncomfortable."

"They would later label me as 'needy'. Not untrue, actually. What I later found out from the director, Howie Deutch, was we were kind of cast to take advantage of that, that it was supposed to be an uncomfortable three-way relationship. And that happened. [Molly’s] so reserved that I always took that as that means she hates me."

In You Couldn’t Ignore Me, McCarthy confirmed Cryer's suspicions: "Jon was very Duckie-like when we were making that movie. He was very sweet, and very needy, and I had no patience for it."

And so was his "that's a major appliance, not a name" quip about Blane.

The 'candy machine' line, about a tampon machine in the girl's bathroom, was inspired by Cryer's real-life experience, where he mistook the machine in Junior High.

12. And Ringwald's most memorable line was almost cut.

In a 2020 interview with The Hollywood Reporter, Deutch explained that the movie's first cut was "a little bit long" so he cut the scene just before Andie goes to prom.

But this meant Andie's now-famous line - "I just wanna let them know that they didn't break me" - wasn't included.

"We showed it to Ned Tanen, the head of Paramount, and he said, 'Where's the scene where she says she's not going to let them break her?' So, I immediately put it back, and I'm embarrassed to admit it," Deutch said.

13. Ringwald's boyfriend made a cameo.

Ringwald was dating Dweezil Zappa, one of the children of musical legend Frank Zappa, at the time of filming, and scored him a small cameo as Andie's friend Simon.

To be fair, Andie's prom dress was... unique. That was the point. Her character had made it herself from two separate dresses.

That's how it came to be in real life too. Costume designer Marilyn Vance bought two dresses, cut them apart and reassembled them the two into one pink dress. 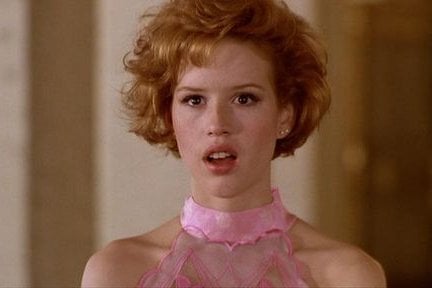 "She hated it with such a passion," Vance told Dazed. But Hughes said the dress was perfect for Andie's character, so it remained.

In an essay for Teen Vogue, Ringwald recalled bursting into tears when she first saw it.

"I'm still not sure how that dress happened. I don’t know if I was swayed by Marilyn's passion when she talked me through the sketches, or distracted by the algebra final I was preparing to take in my trailer in between scenes, but whatever the reason, I signed off on the design," she wrote.

"Weeks later, when I saw the dress for the first time, I burst into tears. The only thing I liked, and even vaguely remembered from the consultation, was the halter neckline. The puffy sleeves and inverted-triangle, sacklike silhouette confounded me, but it was too late to change it."

Ringwald said if she'd had her way, she "would have burned the dress on the Paramount back lot as soon as they yelled the last 'Cut! Print!'".

Pretty in Pink is available to stream on Stan in Australia.

Reply
Upvote
Still love the movie and would hav hated ur Ducky and Andy got together he was the wacky side kick not the leading man . I touch you once I touch you twice I won’t let go at any price one of the greatest movie songs ever 💖💖💖💖
M
mamamia-user-482898552 a year ago